Employees who can still achieve “salary increase” in 2020. Congratulations on your “winning” over CEOs of Fortune 500 food companies in this indicator.

Xiaoshidai noticed that as many multinational food and beverage companies recently released their 2020 annual reports and other materials, the compensation of CEOs last year also surfaced. According to the list of Fortune Global 500 in 2020, xiaoshidai today combed the information of packaging food and beverage companies and some catering companies, including Nestle, Danone, Budweiser, Coca Cola, Starbucks, Heineken and Abbott with milk powder business.

As for Yizi, Pepsi, Unilever and Fomento econ ó mico Mexico, the bottling company of Coca Cola, the salary situation in 2020 has not been released so far, and it is not included in the statistics this time.

An unsurprising phenomenon is that, due to the sluggish performance of COVID-19, the steward of the 7 enterprises that were included in the observation was “the annual salary decline of all staff”.

At the same time, although they have all experienced salary cuts, the salary adjustment rates of CEOs of various companies are quite different. Some CEOs can basically keep the same level with the previous year, with only a slight decline, and can maintain an annual income of more than 100 million yuan, while some CEOs are seriously reduced due to the cancellation of bonus, with a year-on-year decline of nearly 70%.

Let’s do the gossip.

At the same time, there are CEOs of Starbucks, Nestle and Danone.

In terms of RMB, the CEOs of Budweiser and Heineken ranked at the “million annual salary” level. 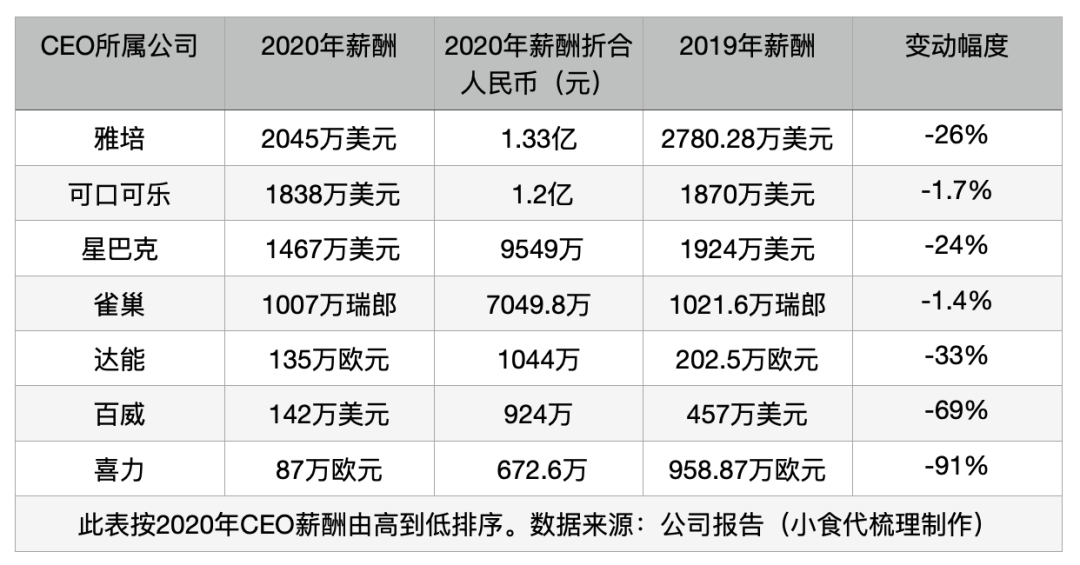 Compared with 2019, the annual salary of CEOs of the above seven large companies has declined to varying degrees in 2020, which is mainly related to the performance bonus. It also reflects the impact of the epidemic on the performance of each company, as well as the crisis response strategies on executive compensation.

Although the “annual salary formula” of CEOs of each company is different, generally speaking, the basic salary only accounts for a part, or even a small part, under normal circumstances, and this income is often relatively fixed.

Take Starbucks as an example. Roughly speaking, in the CEO’s salary composition, the basic salary only accounts for 4%, the annual performance bonus of 7%, and the long-term incentive bonus of 89%.

Nestle and Coca Cola are “the most stable”

As a result, snack generation found that Nestle and Coca Cola were the “most stable” CEOs, with a slight decline of 1.4% and 1.2% respectively. The annual basic salary and bonus of the two leaders have arrived.

It can be seen that the basic salary of Nestle CEO did not change last year, and at the same time, he paid various bonuses, so there was little change compared with the previous year.

According to the financial report of 2020, xiaoshidai said that the world’s largest food company has withstood the epidemic crisis and its organic growth has reached the highest level in the past five years. “In this unprecedented environment, we have achieved organic growth, profitability and return on investment for three consecutive years.” Schneider said earlier.

In addition, the CEO of Coca Cola and other executives of the company received a special one-time bonus equivalent to 30% of the annual target bonus. Members of Coca Cola’s board of directors said that the reasonable bonus payment was “based on the improvement of performance trend in the second half of the year, leaders’ coping ability during the epidemic period and efforts to carry out strategic restructuring”.

Zhan kunjie previously said that in 2020, Coca Cola has taken a series of measures to accelerate the company’s transformation, and is confident that it can resume growth in the next year.

In the above list, Starbucks, Abbott and Danone also have relatively small decline in CEO’s annual salary.

Among them, Abbott is also the company with the richest CEO salary. Previously, Robert Ford was the chief operating officer of Abbott and was appointed as the chief executive officer on March 31, 2020. As a result of his promotion, his basic salary will increase to $1.4 million in March 2020, and his corresponding performance bonus will also be raised. Last year, he successfully received various performance bonuses and other salaries.

It may be controversial that Abbott, whose product mix is far more than milk powder, is on today’s list. In fact, the CEO’s salary also reflects Abbott’s good performance growth last year. In addition to infant nutrition, the company also has many businesses, such as diagnosis, medical devices and drugs. According to the financial report, in 2020, Abbott’s global sales reached US $34.6 billion, a year-on-year increase of nearly 10%.

Interestingly, Starbucks is the only company on the list whose CEO’s “base salary” has increased. According to the documents, Johnson’s annual basic salary increased by 3% year-on-year, and he also received a bonus. However, due to the decline of income other than the basic salary, the overall annual salary decreased.

“When many companies choose to suspend or lay off their employees, (Johnson) leads the company to deal with COVID-19 successfully, leading a large number of industry-leading investments in Starbucks employees, including investment in a range of welfare and remuneration policies.” Starbucks pointed out that despite the business disruption caused by the epidemic, the annual dividend still increased by 10%, maintaining annual growth for the 10th consecutive year.

In addition, fan Yimou, CEO of Danone, who will be the chairman of the board of directors, also received all the basic salary last year, and this part of the annual fixed salary has not changed since it was determined in September 2014. However, due to less variable annual compensation, the overall annual salary in 2020 has decreased by one-third compared with that in 2019.

Not long ago, Danone officially announced that it would separate the positions of chairman and CEO, and the process of recruiting new CEO has started. Once completed, Mr Fan will focus on his role as a non-executive chairman.

The CEOs of the two beer companies have no bonus

In the above list, the biggest decline in CEO’s annual salary is that of the two beer companies – not only there are no bonuses, but also the basic salary has been “discounted”. It seems that in 2020, the big beer companies are really tightening their belts.

HeineKen pointed out that in order to deal with the COVID-19 crisis, executive board members will implement a pay cut. “No matter what the performance in 2020 is, short-term and long-term performance awards will not be issued. In addition, the executive board voluntarily decided to reduce the basic salary by 20% from May 1, 2020 to December 31, 2020, so as to make personal contribution to the financial measures taken by the company. ” Heineken said.

It should be pointed out that Heineken’s new CEO has been officially appointed since June 1, 2020, and has been the CEO for less than one year. To some extent, this will affect the annual salary data in the above list.

“Taking into account the COVID-19 in 2020, from May 1, 2020 to December 31, 2020, the executive board and SLT members voluntarily reduced their basic salary by 20%.” According to the company, the CEO’s fixed annual salary, or base salary, will be $1.42 million in 2020, based on employment contracts (and taking into account a voluntary reduction of 20%).

“In 2020, the overall achievement rate of performance standards reached 0%, which reflected COVID-19’s impact on the company’s operations and performance.” Budweiser explained that because it failed to meet the company’s and business unit’s overall goals, it would not receive variable compensation (i.e. bonus) regardless of the achievement of individual goals.

Snack generation noticed that in 2019, Budweiser’s CEO received a $2.93 million bonus. “The amount of these bonuses is based on the company’s performance in 2019 and the achievement of executives’ personal goals.” The company explained.

However, Budweiser’s board of directors has given borretto long-term incentive restricted shares in 2020, along with other company benefits, such as insurance and some allowances.

Snack food noticed that in a report published in January this year, Harvard Law School Corporate Governance Forum said that in general, because of the decrease in bonus and the poor performance of many companies during the hitherto unknown business interruption brought by COVID-19, the CEO salary of the S & P 500 enterprises (S&P 500) in 2020 may drop by 3% to 4%.