In the Chinese market, Nespresso (Chinese Name: espresso) of Nestle, the global coffee giant, has another “strong general”.

Xiaoshidai noticed that recently, this capsule coffee brand announced that vertuo Fuxuan series will be officially introduced into the Chinese market. The new coffee machine products and supporting coffee capsules of this series will first be listed in Nespresso national boutique and official website.

It is worth noting that since it entered the Chinese market in 2007, Nespresso has launched a new series of coffee machines for consumers 14 years later.

Up to now, espresso has three product lines in China. In addition to the newly launched vertuo and original series, there are also commercial solutions for professional catering channels, including commercial capsule coffee machines and commercial capsules for hotels, office buildings, restaurants and boutique coffee shops. 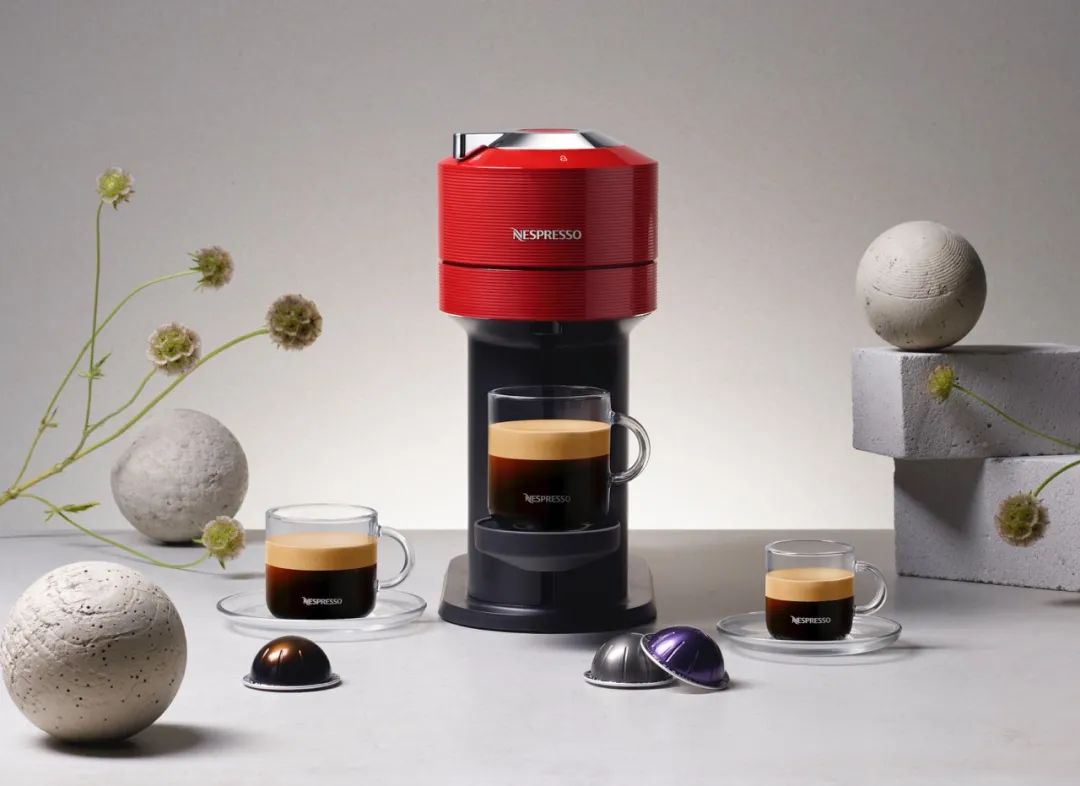 In the post epidemic period, this is also the latest move of Nestle China to increase home coffee consumption.

“The epidemic has made many Chinese consumers get used to consuming and drinking coffee at home, so to some extent, it also provides certain conditions for our business development.” “We will continue to broaden the choice of home coffee for Chinese coffee lovers,” Lin Shangming, general manager of Nespresso espresso Greater China, told xiaoshidai today

Tonight, we might as well take a look at the “niche business” in this coffee track and the latest way Nestle plays in this market segment.

Demand for large cups of coffee

As a matter of fact, this “fierce general” has a long history and has made great achievements in recent years.

In 2014, Nestle Nespresso launched vertuo capsule coffee machine in North America, and then successively entered France, Britain, Ireland, Switzerland, Germany and other countries. When praising the innovation cases in the group, Fran ˊ OIS Xavier Roger, chief financial officer of Nestle, disclosed that in 2018, the sales of the series had reached 400 million Swiss francs (about 2.68 billion yuan), with a growth rate of 60%.

Interestingly, when it was launched in China this time, vertuo Fu Xuan series aimed at the demand of “big cup of coffee”.

“This is a decision based on our long-term insight into the Chinese market. We found that (according to GfK data), in Chinese mainland, 93% of consumers prefer coffee, that is, 200 milliliters of coffee. Lin Shangming told Xu xiaoshidai today. Previously, the original series offered specifications of 25ml, 40ml and 110ml respectively. 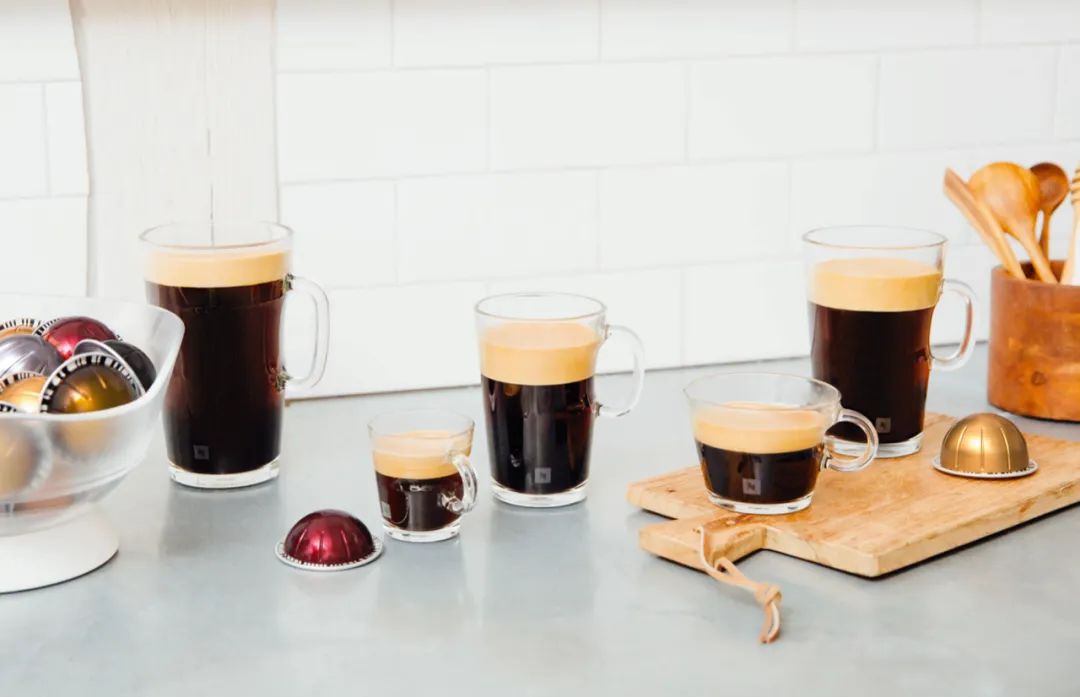 As an important part of the play, “big cup of coffee” also has more tastes. Xiaoshidai noticed that 230 ml capsule coffee products matched the most, with a total of 12 products, such as strong coffee, merlequio coffee, hazelnut cake flavor coffee, etc; The other specifications offer 3-4 flavors respectively. At present, the price of vertuo Fuxuan series capsules is mostly 4-7.3 yuan / capsule. 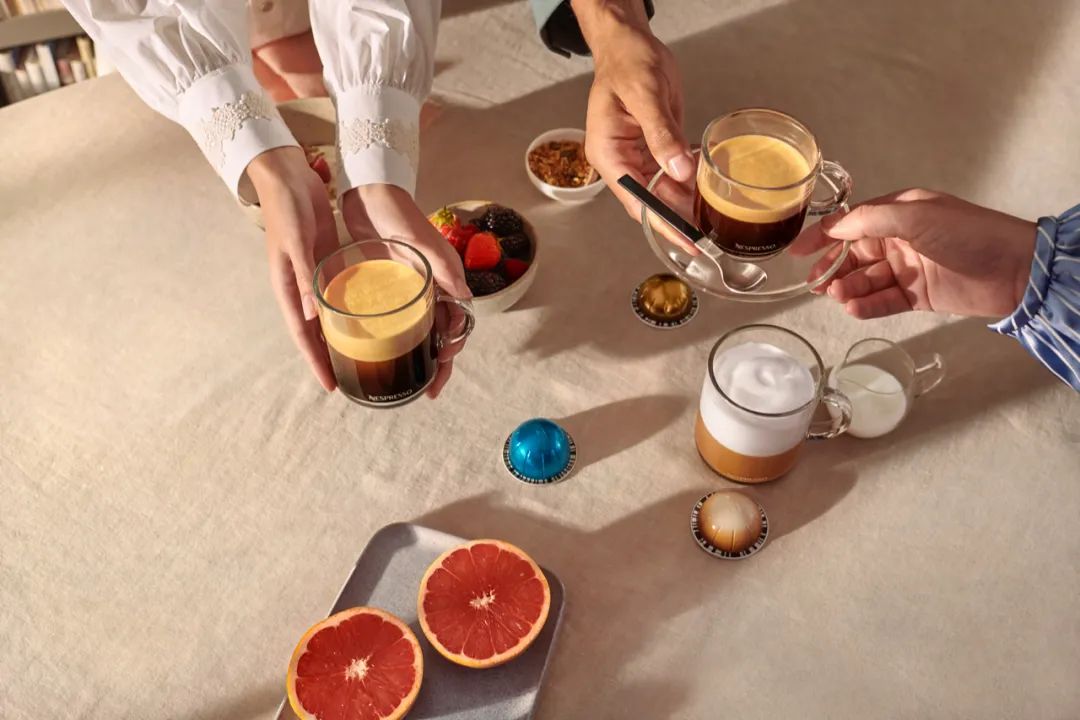 So, is there any “black technology” in this new coffee machine?

Vertuo has a “unique centrifugal force extraction technology” that changes the way coffee is extracted, according to reports. In addition, the bar code technology is used in the intelligent extraction system, which can identify 22 kinds of special capsules, and automatically adjust the extraction parameters for each. Users can get a cup of coffee with “accurate flavor presentation” by one touch.

“In the second half of this year, we will launch more mixed flavor and single origin coffees and models in China. In addition, we will introduce limited edition and seasonal coffee to enrich consumers’ taste choices. ” Lin Shangming told snacks to replace “spoilers”.

As high value-added products, coffee machine and coffee capsule have become one of the growth drivers of Nestle coffee business.

Currently, the world’s largest coffee company operates coffee machines and capsules in about 80 markets. In China, the coffee products sold by Nestle have expanded from instant coffee many years ago to ready to drink coffee, ear hanging coffee, capsule coffee and other sub categories.

In a report released in 2018, inmante pointed out that Nestle has become a “more powerful leading brand” in the coffee market in China, although the instant coffee business has been struggling.

According to the report, on the one hand, after being authorized by Starbucks, Nestle began to increase the retail channel’s high-end coffee business. On the other hand, Nestle has more potential in its current coffee business“ Capsule coffee is still a new thing for Chinese consumers, but the share of coffee machine is still increasing, which brings opportunities for Nespresso to improve its market penetration. “ However, compared with a cup of freshly ground coffee that can be drunk for more than ten yuan, it is not easy to sell the 1000 yuan level capsule coffee machine and supporting coffee capsules to Chinese consumers.

“I usually drink coffee when I work in the company and make it with the coffee machine in the office. On weekends, I seldom drink it. When I drink it, I usually drink coffee powder, or go to a coffee shop when I go out. I haven’t thought about buying a capsule coffee machine at home for the time being. ” Many young white-collar workers with coffee drinking habits expressed similar views to the snack generation.

Nestle CEO Mark Schneider previously pointed out to xiaoshidai that whether it’s coffee capsules or roasted coffee beans, these are not very useful for people who don’t have a coffee machine at home“ If you want the product to sell, you have to show people how the machine works, and you have to make people willing to put such a machine in a small kitchen where the space needs to be highly utilized. So consumer education still needs to be done. “ To this end, espresso has opened a number of offline boutiques for consumers to experience products directly.

“With the continuous development of the market, especially the rise of online business, we have expanded the business of tmall, Jingdong and other platforms.” He said the epidemic has also prompted the brand to continue to diversify its sales channels, such as opening a micro store on the wechat platform last year.

Offline, espresso is still expanding its boutique network. Lin Shangming had previously told xiaoshidai that more offline boutiques would be opened in the future, “at least one new city will be opened in 2021.”.

The scale doubled in two years

Although it is still relatively small at present, with the upgrading of coffee consumption in China, the increase of coffee lovers and the improvement of home coffee consumption, capsule coffee machine has also shown an amazing growth curve in recent years.

According to the data obtained by xiaoshidai from Euromonitor Euromonitor today, the market scale of China’s capsule coffee machine has been growing rapidly in the past three years, and the annual sales volume has doubled from 206000 in 2018 to 436000 in 2020; The total retail sales also increased from 312 million yuan in 2018 to 551 million yuan in 2020, nearly doubling.

This also attracted many players into the game. Nestle is still far ahead in this category.

According to Euromonitor data, in the past three years, in terms of sales volume, Nestle espresso and Nestle Dolce gusto have ranked first and second in the market share of China’s capsule coffee machine, accounting for more than 70% of the total market share, which is significantly different from that of Jiuyang capsule coffee machine, which ranks third. For example, in 2020, the market share of strong coffee, duoquus and Jiuyang will be 43%, 33.2% and 8.3% respectively.

However, it is interesting to note that the competition for this coffee segment is probably more important not from the coffee machine itself, but from the consumed capsule coffee, which is very similar to the business model of razor. Asked about the proportion of sales revenue of espresso from coffee machine and coffee capsule, Lin Shangming said to xiaoshidai today that it is “inconvenient to share the sales figures”. In the coffee capsule products, Nestle also has a “strong support”: Starbucks.

“As soon as Starbucks brand capsules are launched, they are loved by consumers. In particular, the multi flavor Starbucks coffee capsule set we built for consumers in the flagship store of e-commerce is a very popular product. ” Lin Shangming told xiaoshidai today that in the future, strong coffee will continue to launch more new coffee machines and new types of coffee.

Pay attention to “xiaoshidai” (wechat: foodinc) “and reply to” Nestle “to see the wonderful news.