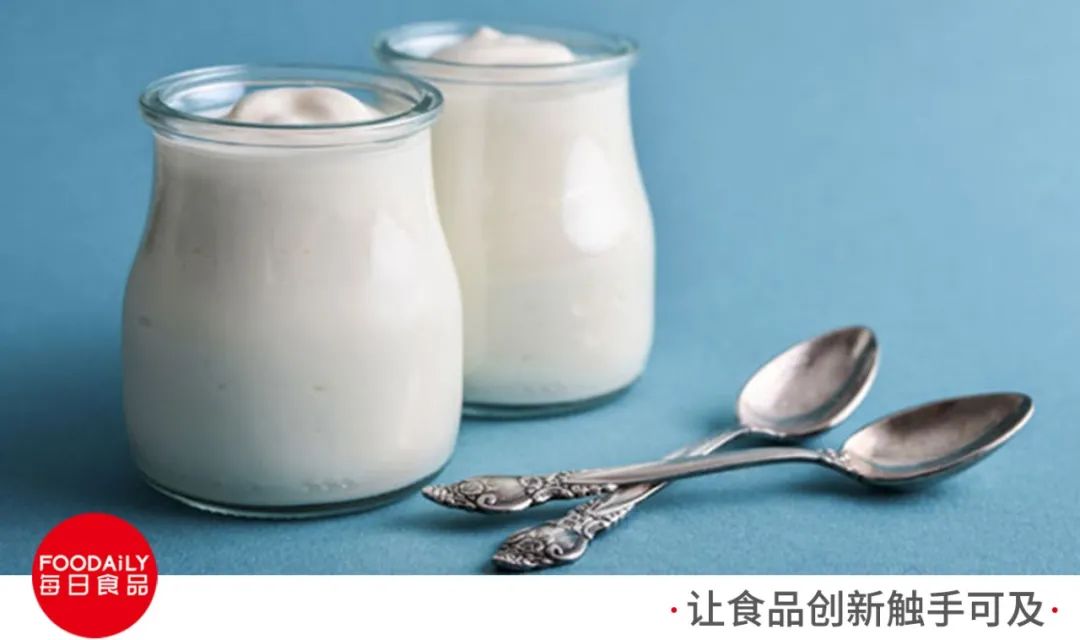 After the “milk tea freedom” and “chelizi freedom”, the “yogurt freedom” has recently been on the hot search. Senior dairy enthusiasts who grew up drinking yoghurt saw yoghurt bid farewell to the “2 Yuan era” all the way to break through the 10 yuan mark, but the amount was no more than 2 yuan yoghurt.

What is the reason behind the operation of “price increase without quantity increase”? What is the cost of yogurt production“ What are the ways to attract consumers’ wallets?

When did Chinese people drink yogurt?

As early as the Northern Wei Dynasty, Qimin Yaoshu written by Jia Sixie recorded the ancient method of making Qidi yoghurt (called “cheese”). Although Chinese people have a long history of drinking yoghurt, it was only in the last century that yoghurt was produced in batches.

Before Kedi’s milk company opened a factory to produce yogurt, most of the yogurt sold on the market was handmade and sold in limited quantity. Therefore, yogurt was not the main source of daily dairy intake.

However, with the large-scale production of yoghurt by local dairy factories, the “old yoghurt” packed in porcelain bottles began to be popular on the Chinese table. There used to be rows of porcelain bottles of yoghurt in the canteen at the entrance of the Hutong. After school, they spent two or three yuan to drink on the spot at the door of the canteen. After drinking, they had to return the bottles.

Later, yogurt gradually entered the supermarket, bag packed “stirred yogurt” occupied the shelf, a variety of fruit yogurt, oatmeal yogurt also enriched our choice. A cup of yogurt every day has become the habit of many families.

However, the pattern will run out one day. After finding that no matter what fruit grains are added, they can’t compete with big enterprises for market share, the emerging yogurt enterprises have come up with another way: high-end route.

How outrageous is the rising price of yogurt?

When it comes to high-end products, people’s first reaction is high prices. Yogurt, once used to be a popular drink, has actually gone up in price unconsciously. Through the comparison of several popular and high-end yoghurt on the market, Sixiang found that the era of 2 yuan has passed, and the high-end yoghurt is generally higher than 8 yuan / bottle, but the portion is no more than 2 yuan yoghurt. 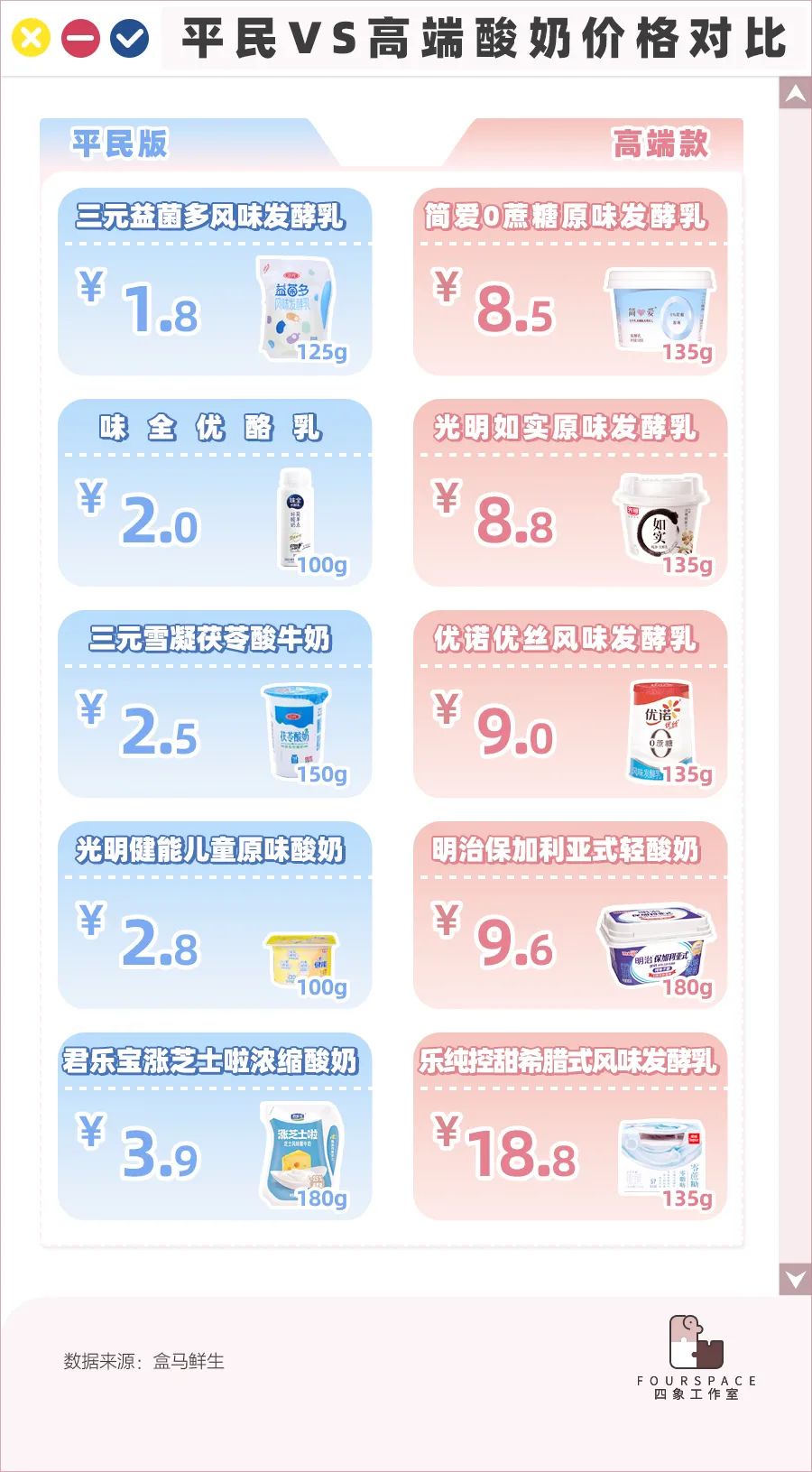 There are a lot of high-end yoghurt with more than 10 yuan that are not listed in the chart. The most exaggerated thing is to mention “Hermes” – blue glass archelaga in the yoghurt industry, which directly sells yoghurt. The price of a cup of “avocado, coconut, oatmeal and Pearl collagen yoghurt” on the signboard is as high as 42 yuan, far behind Xicha and Starbucks.

According to the enterprise survey data, up to now, 22 yogurt brands in China have received financing, with 35 financing events and 7.316 billion yuan of financing disclosed. Most of these emerging brands that have obtained financing take the high-end and online Red route, and all have their own product selling points, such as “Jane Eyre naked yogurt”, “Shengda yak yogurt” and “meow Xiaojiang porcelain can yogurt”. 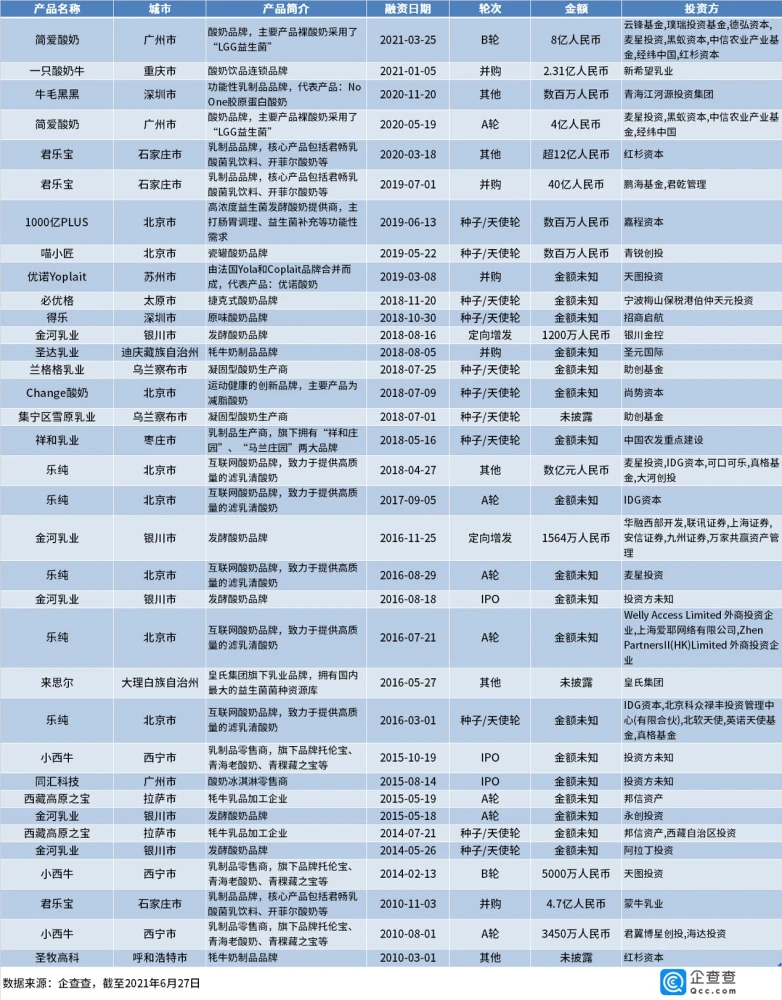 Although the actual quality of these brand yogurt is not necessarily as good as the publicity, it is certain that at least taking the “high-end route” can bring higher profits and business opportunities. 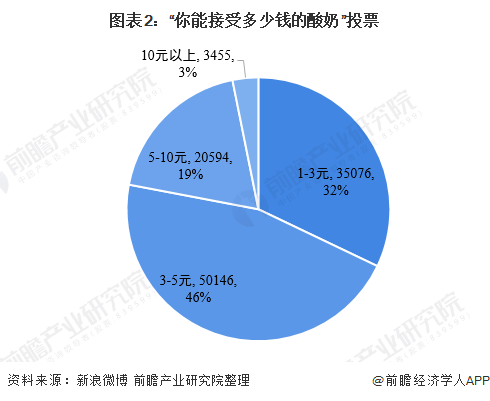 Is the rising price of yogurt related to the production cost?

As consumers, we all hope that every penny is worth spending. Is the rising price of yogurt caused by the increase of production cost or other premium unrelated to the product itself?

It seems that there are as many as eight steps, but the core step of making yogurt is to add lactic acid bacteria to milk for fermentation. In addition to the small cost of machine wear and tear, the main cost of yogurt production basically comes from raw milk, additives and lactic acid bacteria.

Beiqing daily once investigated about 20 different brands of “high-end yogurt” on the market, only three brands added more than four strains, and most of the other high-end yogurt only added 2-3 strains.

In fact, friends who have made yogurt should know the cost of a cup of yogurt. Online shopping 2 contains 10 kinds of probiotic yogurt powder, the price is only 10 yuan +, can make 20 cups of yogurt, plus the cost of milk, and the cost of the factory is almost the same.

The routine of yogurt price increase

In the article “can the net red ice cream return to its original heart when the price soars nearly 10 times”, we once checked the marketing gimmicks of “net red ice cream” that seem fancy, but actually have little to do with the ice cream itself. So, since the increase in the production cost of yogurt is not as exaggerated as expected, what makes consumers willing to pay for “high-end yogurt”?

After observing dozens of yoghurt with higher than average price on the market, Si Xiang summed up “four golden treasures” in the yoghurt industry.

The first is to claim that their products add a unique strain of “functional yogurt”. As we all know, the nutritional value of yogurt, in addition to the protein and calcium contained in milk, mainly comes from the addition of probiotics.

“Lg-21”, “R-1”, “lb-8″… The arrangement and combination of various letters and numbers try to create a tall feeling for consumers who don’t know why, and make people believe that drinking this yogurt can cure all diseases. The package of Meiji baileyiyou “lg-21” yoghurt product indicates that it is a kind of lactic acid bacteria that can “challenge stomach acid”. Even the little red book has the magical effect of “eliminating Helicobacter pylori”.

In fact, the scientific name of lg-21 is “Lactobacillus griffii oll2716 strain”, which is essentially a kind of Lactobacillus. This probiotic does have a certain inhibitory effect on Helicobacter pylori and gastritis, but it does not have the exaggerated effect of “cure the disease”. In fact, many cheap yogurt added with Lactobacillus on the market have similar effects, while this bottle of “lg-21” costs 12 yuan.

Relying on the introduction of fancy taste to attract money, can be said to be the same as many net red food“ Strawberry heart cheese yogurt, sounds like eating Michelin restaurant’s high-end dessert, but to say that it is different from ordinary fruit yogurt, it really can’t be said.

If it is said that the effort in taste actually makes consumers “taste” the sweetness, then the concept of “healthy and light body” and the marketing cost are completely separated from the yogurt itself and become a product premium. The so-called “sweet control” means less sugar, and the so-called “light yogurt” means less fat. However, these labels have become the bargaining chip for the rise in the price of yogurt.

In addition, it also costs a lot to invite traffic stars to speak for you, plant grass crazily on social media such as microblog and little red book, and market the concept of “online Red yogurt”. Chunxiang hired Yang Yang as its spokesperson, while anmuchi hired Cai Xukun… These costs are recovered by cutting leeks from fans, and the rest is borne by ordinary consumers.

Yogurt, which is supposed to be a daily consumer goods, has become more and more unbearable because of its marketing label. Needless to say, there is also a phenomenon of “Involution” in the yogurt industry. When other brands are promoting the idea of using higher quality milk source, better strains and healthier, if they do not have their own marketing strategies, they will be “rolled” into the torrent of the market. Enterprises will not wait to die. How much cheaper yogurt can we buy in the future?