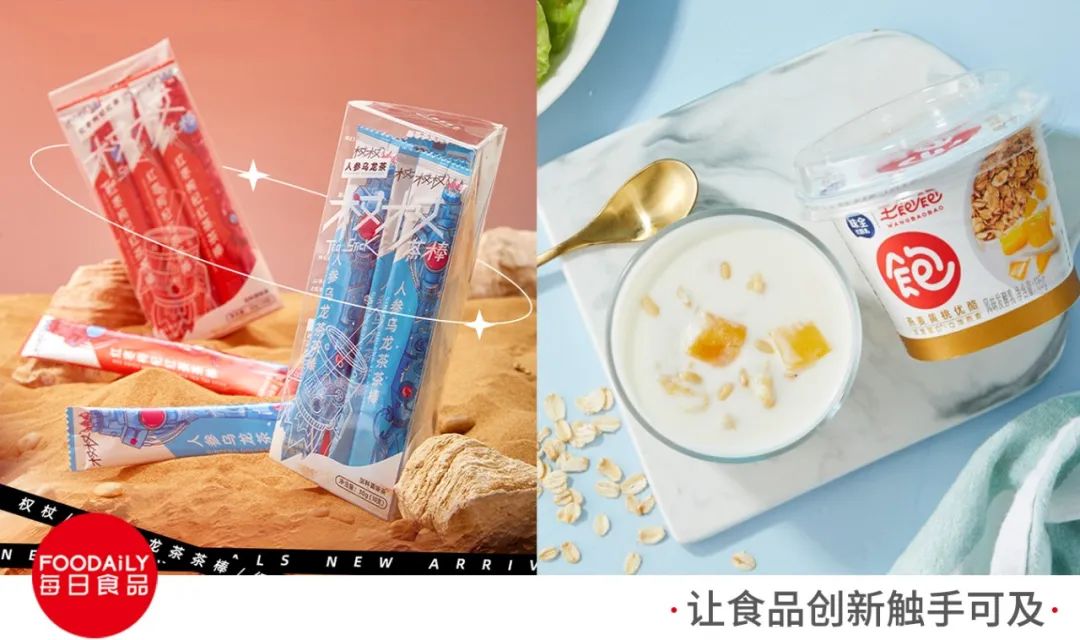 6. Continue the classic of “violent beating” and launch the new series of Xi tea and pop lemon tea

9. Lanzhou beef noodle brand Chen Xianggui won a new round of over 100 million yuan a round of financing, with a valuation of nearly 1 billion yuan

10. Seesaw coffee completed a + round of financing of more than 100 million yuan, and Xi tea took shares

11. M stand, a cutting-edge coffee chain brand, received a round B financing of more than 500 million yuan to accelerate store expansion

12. The A1 snack Research Institute, an innovative snack brand, received hundreds of millions of yuan of financing and continued to overweight the offline market

13. Xuanbo beer, a fine brewing brand, has completed a round of pre-A financing of nearly 50 million yuan, and its monthly sales are expected to exceed 10 million yuan

14. Dongpeng ® Taurine B vitamin beverage is an approved health product, which can alleviate physical fatigue

15. Qiaqia food established an investment company with a wholly-owned holding of 200 million yuan

18. McDonald’s China opens the annual “big potato day” Carnival, and the designer series are limited to be sold around

In July 22nd, according to the official WeChat official account of Le Chun’s partners, Le pure introduced new zero sucrose pure yogurt. It is reported that the new product focuses on pure formula, high protein and zero sucrose. Stevia glycoside and yidaixin sugar are used to replace white granulated sugar fermentation. It will not be used by microorganisms causing tooth decay. It is suitable for children, pregnant women and other people. At present, the new product has been launched on wechat at the price of 99 yuan / 12 cups. 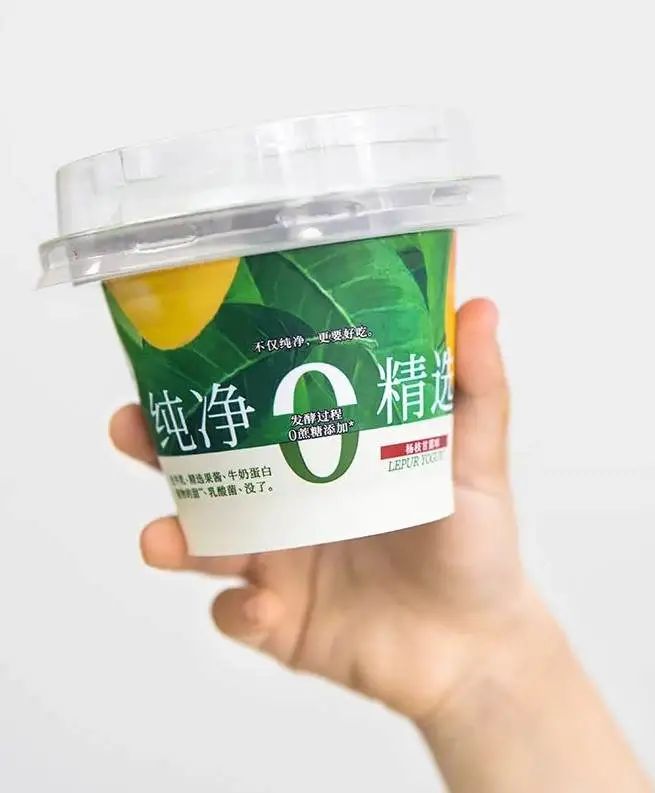 Recently, Wahaha officially launched a series of fruit flavored tea Taoyuan tea, focusing on the new Chinese fruit tea concept of health and low sugar. It is reported that Taoyuan tea series adopts the original leaf extraction technology to adjust the product flavor with real fruit juice, and the sugar content of the product is less than 5%. The tea polyphenols contained in the product also have a certain function for health care. At present, the new products have four flavors: Peach Oolong, emerald grapefruit, litchi qingti and Baixiang lime. 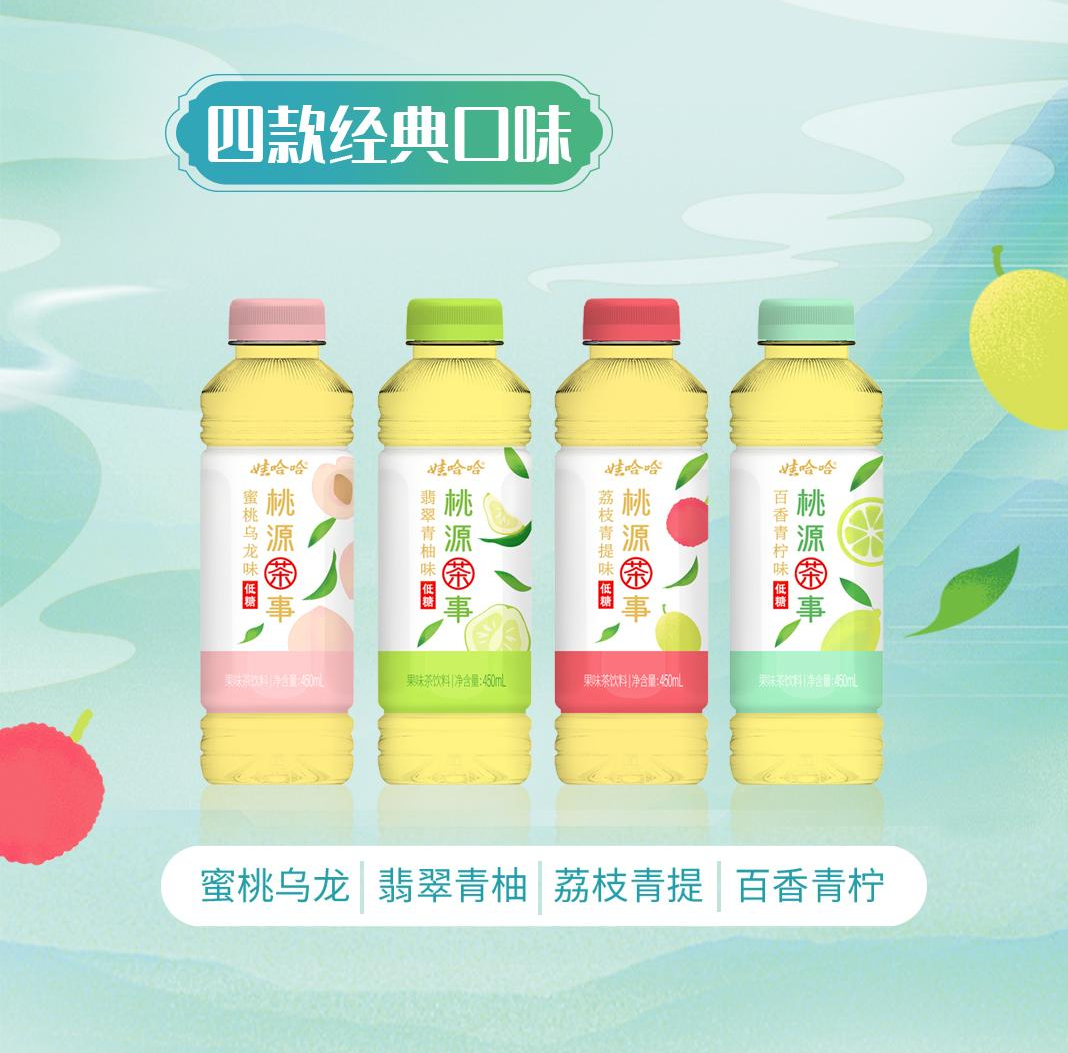 Recently, mint Health launched the scepter tea stick, which has two flavors: Ginseng oolong and red jujube medlar. Scepter is a new generation of brewing tea brand focusing on young people under Mint health. The formula is nutritious and healthy and adds multiple beneficial raw materials. It is worth mentioning that the scepter tea stick has 466 small holes, which can release the tea liquid evenly, and the tea stick is independently packaged, clean, sanitary and easy to carry. At present, the new product has been launched into the flagship store of mint healthy tmall, with a price of 109 yuan / 10 pieces. 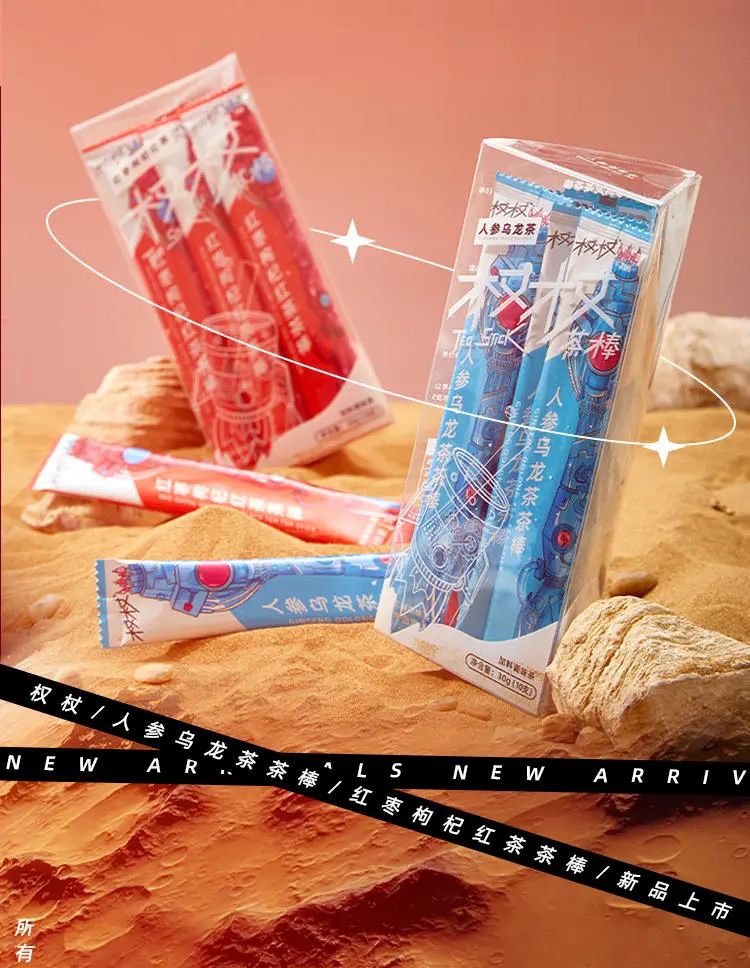 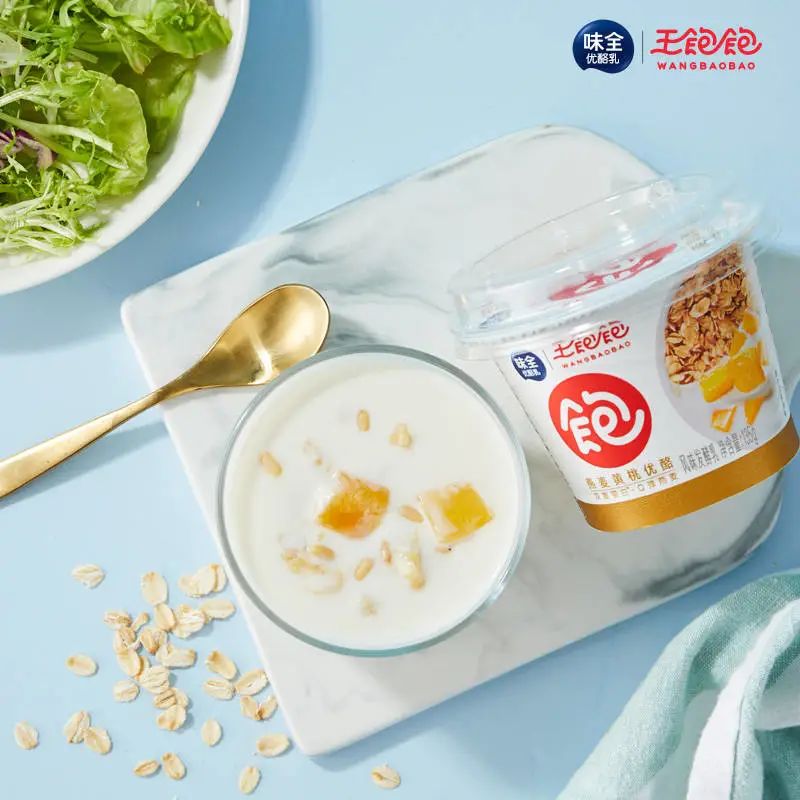 Recently, the new herbal bubble juice brand hope water launched a new rice wine brand Li Huanxi, and launched the original rice wine of the same name. The precision of the new wine is 8%. The raw materials are strictly selected from pure Kuaiji mountain spring water and high-quality rice in the current season. The higher part of the outer layer 35% fat is removed by grinding to reduce fermentation impurities; The combination of native high-purity yeast and natural enzymatic hydrolysis process brings natural sweetness; The physical snow falling process and low-temperature pasteurization were used to preserve the fresh taste of rice wine. At present, the new product has been launched in Li Huanxi tmall flagship store, with a price of 300ml / bottle / 48 yuan. 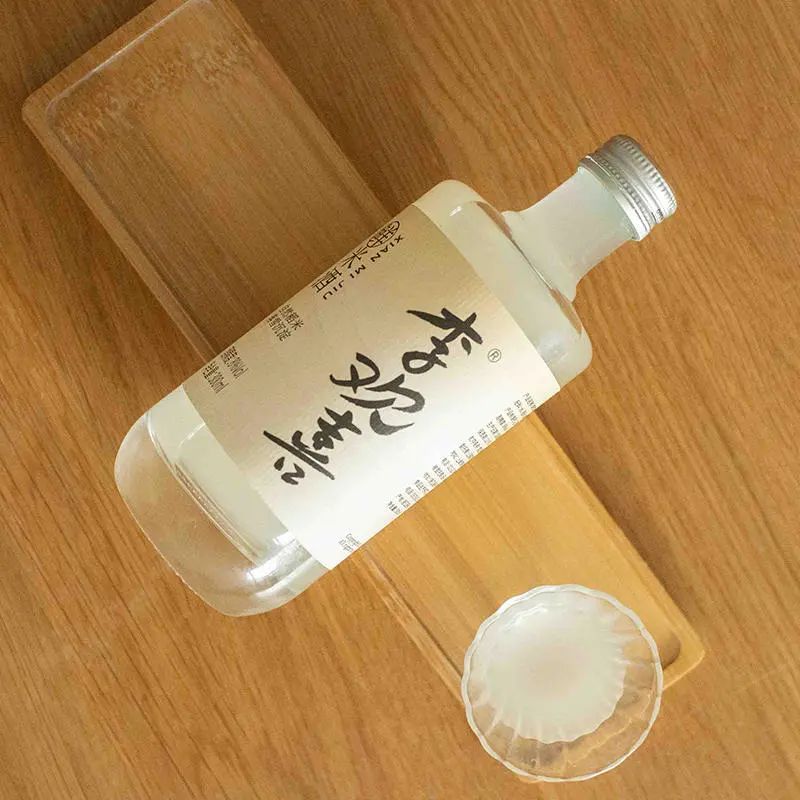 In July 16th, the green tea was introduced with two new products, namely, tender lemon and strong lemon, which are made from lemon and lemon, which are released by the scent and release of the fragrance. The rich “Guangdong red” tea is used as the base of thick pop lemon, and 100% lemon juice is added. The taste is thick and astringent, full of acidity, which is more in line with the flavor of traditional lemon tea. 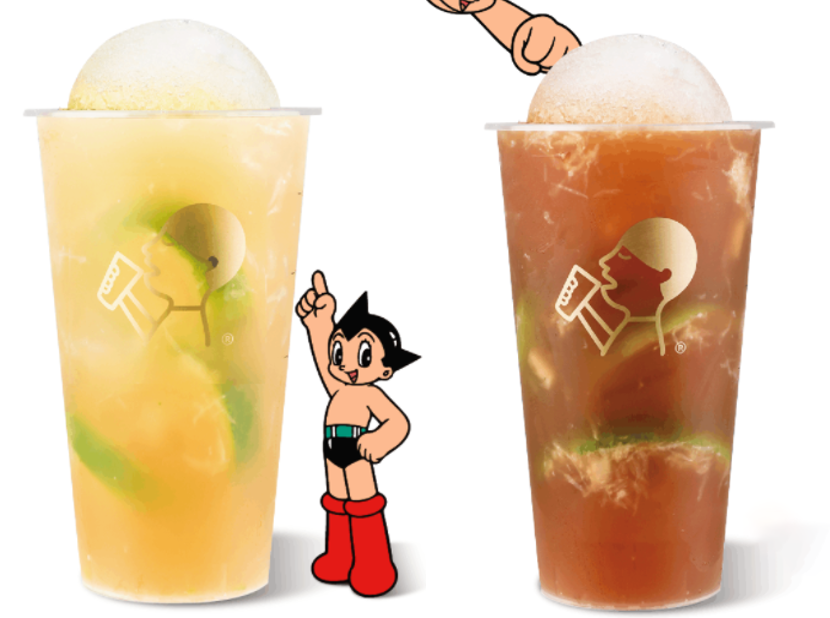 Recently, the “noodle” industry has been financing continuously, which is very lively. Foodaily recently learned that Lanzhou beef noodle brand Chen Xianggui has completed a new round of over 100 million yuan a-round financing, led by zhengxingu capital, followed by Yunjiu capital, the old shareholder source capital and angel investor song huanping continue to support, and Taihe capital acts as the exclusive financial adviser.
Chen Xianggui’s store was first opened in March 2020. Up to now, more than 50 stores have been opened in Nanjing and Shanghai, mainly promoting beef noodles, common baked string, bean skin and other snack categories. There are about 25 kinds of SKUs, and it is new every 2-3 months. It also launched Lanzhou characteristic drink – Fangha sweet fermented grains milk tea, so that customers can experience a more authentic Lanzhou culture.

On July 21, seesaw announced that it had completed a + round of financing of more than 100 million yuan, Xi tea took shares, and Hony Baifu, the old shareholder, followed the investment. This round of funds will be used for national store expansion, supply chain construction and digital construction.
Founded in 2014, seesaw focuses on high-quality coffee, builds its own coffee bean base, selects all direct stores for operation, and can follow the brand route. In 2020, seesaw incubated a creative coffee product line combining “high-quality coffee quality + creative product flavor”. In recent 12 months, the store performance has achieved continuous growth, with more than 1.5 million brand members and fans, and the repurchase rate of creative coffee is as high as 40%. 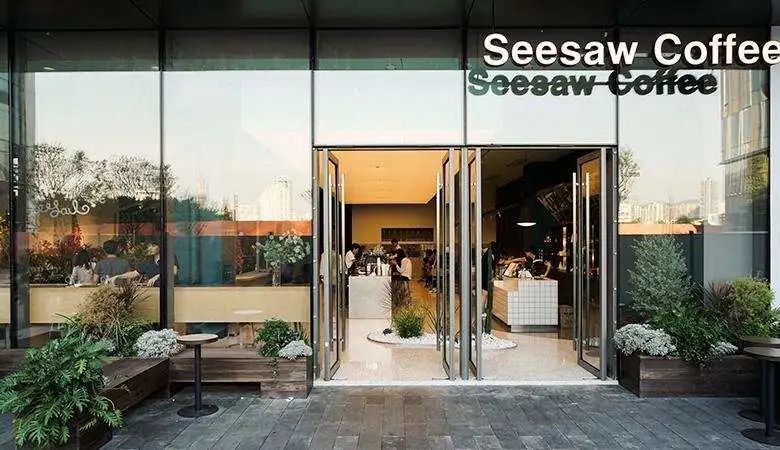 Recently, m stand, a new cutting-edge coffee chain brand, announced that it had completed a round B financing of more than 500 million yuan, which was jointly led by black ant capital and Qicheng capital, followed by Gaorong capital, continued to add CMC capital and Challenger capital, and Yikai capital served as the chief financial adviser. It is reported that this round of financing will be mainly used to build a top talent team, strengthen the supply chain system, upgrade the intelligent information digital platform and accelerate the expansion of stores nationwide.
M stand was established in Shanghai in 2017. The team has outstanding abilities in creative coffee creation and beautiful space design. At the same time, with Shanghai as the base, it has expanded rapidly to Hangzhou, Ningbo, Shenzhen and Guangzhou, and the scale of stores has increased several times at the rate of more than 10 stores a month. According to the current development rhythm, m stand will break through 100 stores this year. After this round of financing, the brand valuation is as high as 700 million yuan. 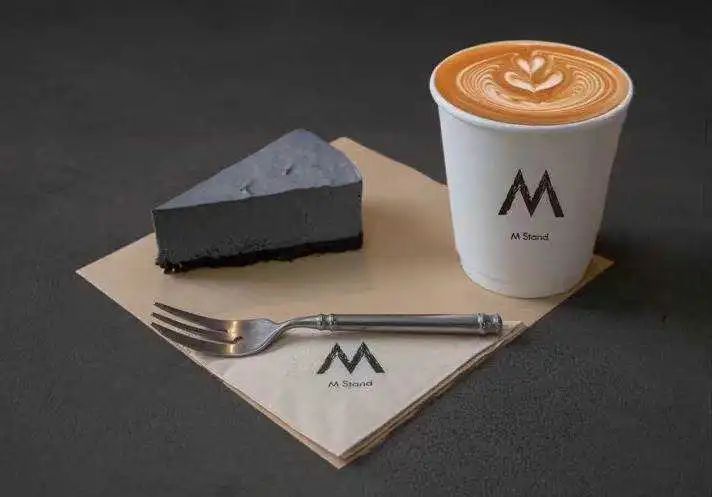 Recently, A1 snack Research Institute, an innovative snack brand, has completed a strategic financing of hundreds of millions of yuan. The investor is China Resources National dispatching fund, with a post investment valuation of more than US $1 billion.
Egg yolk puff, A1, was founded in 2016. It is a Internet plus type food company based on mobile e-commerce channel. It has more than 300 SKU including baking, nuts and meat products, and has made A1 cloud cake, egg yolk crisp, watermelon and toast. In the future, in terms of sales channels, A1 snack Research Institute will focus on new offline retail channels and open unique brand offline experience stores with distinctive visual symbols. 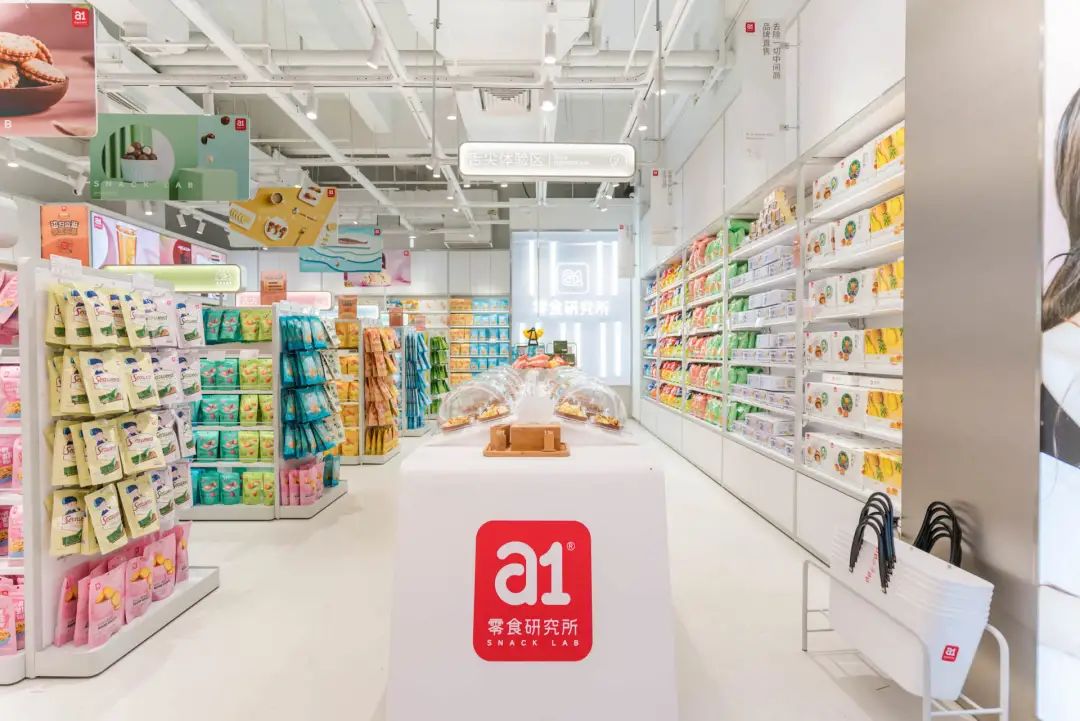 Foodaily recently learned that xuanbo beer, a fine brewing brand, has completed a pre-A round of financing of nearly 50 million yuan, led by Meihua venture capital, Pangu Chuangfu, Yuze capital, photosynthetic venture capital, Kaiying capital, Shenzhen carbon follow-up investment, and Yuze capital serves as the exclusive financial adviser. This round of financing is mainly used for increasing stock, supply chain upgrading and market promotion.
Xuanbo beer was officially launched on the e-commerce platform at the end of October 2020. The conventional 28 day brewing process was adopted to reduce the cost and improve the selling price through the localization and substitution of auxiliary materials, the transformation of process equipment and the optimization of supply chain. At present, there are three SKUs of 330ml portable, 1L and 2L, with a price of about 3.9 yuan / 330ml. In addition, the category that the brand is developing also includes grapefruit brewing, focusing on the women’s low alcohol wine market. 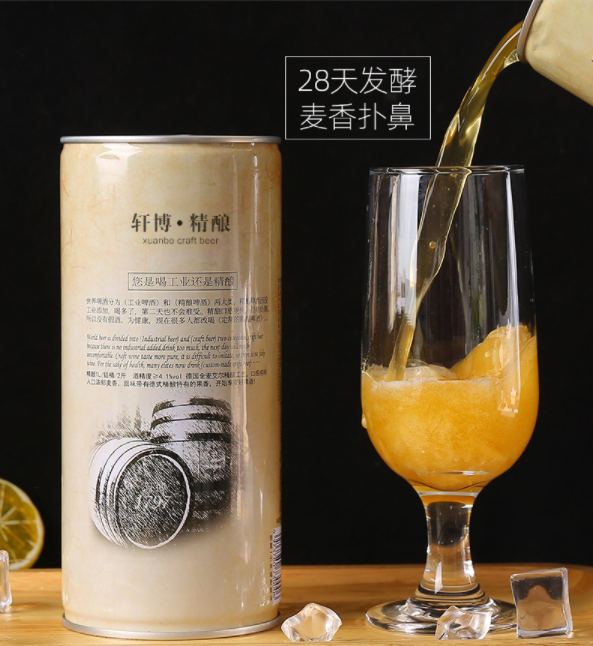 On July 15, Dongpeng beverage announced that the company’s subsidiary Guangzhou Dongpeng food and Beverage Co., Ltd. applied for “Dongpeng” ® The “taurine B vitamin beverage” product has completed the registration of domestic health food and obtained the registration certificate of domestic health food issued by the State Administration of market supervision and administration. The registration number of the product is Guoshi Jianzhu g20210087, which is valid until July 4, 2026. It has the health care function of alleviating physical fatigue and is suitable for people prone to fatigue.
Dongpeng beverage stressed in the announcement that the success of this registration will not have a significant impact on its recent operation, but it will help Dongpeng group further improve its product categories, enrich its product lines, enhance its competitiveness in the field of functional drinks, comply with the group’s strategic plan for the layout of healthy and functional drinks, and is of positive significance for its future development.

On July 19, Shanghai chuangwilai Investment Co., Ltd. was established. The legal representative is Chen Qi, with a registered capital of 200 million yuan. Its business scope includes investment consulting, investment management and industrial investment. Shareholder information shows that the company is wholly controlled by Qiaqia Food Co., Ltd.
Qiaqia Food Co., Ltd. is a foreign-invested joint stock limited company established by Anhui Qiaqia Food Co., Ltd. on August 9, 2001. The company is located in the national Hefei Economic and Technological Development Zone. It is a modern leisure food enterprise focusing on traditional fried goods and nuts and integrating independent research and development, large-scale production and marketing. It is known as the leader of China’s fried goods industry. 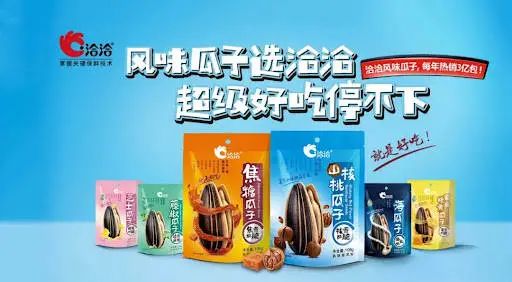 On July 20, Jingdong Qixian supermarket in North China fully launched Qixian control card meal. It is reported that the product is divided into two boxes, including staple food and main course. The staple food is composed of net red rice, comprehensive coarse grains, eggs and white dishes. The main course is one meat and two vegetables, including meat, mushrooms and green vegetables. The data show that the weekly repurchase rate of seven fresh control card meals reaches 44%. In this regard, the brand said that the card control meal will be gradually launched in the national stores in the future.
Qixian supermarket is a food and fresh supermarket under Jingdong. Relying on Jingdong supply chain, a professional buyer team goes deep into the country of origin for direct purchase, and establishes a full link quality management system from the country of origin to the table, covering live aquatic products, meat, poultry, egg and milk, fresh fruits and vegetables. At the same time, customers can also buy goods on the Qixian app and place an order, which can be delivered as soon as half an hour within three kilometers around the back door store. 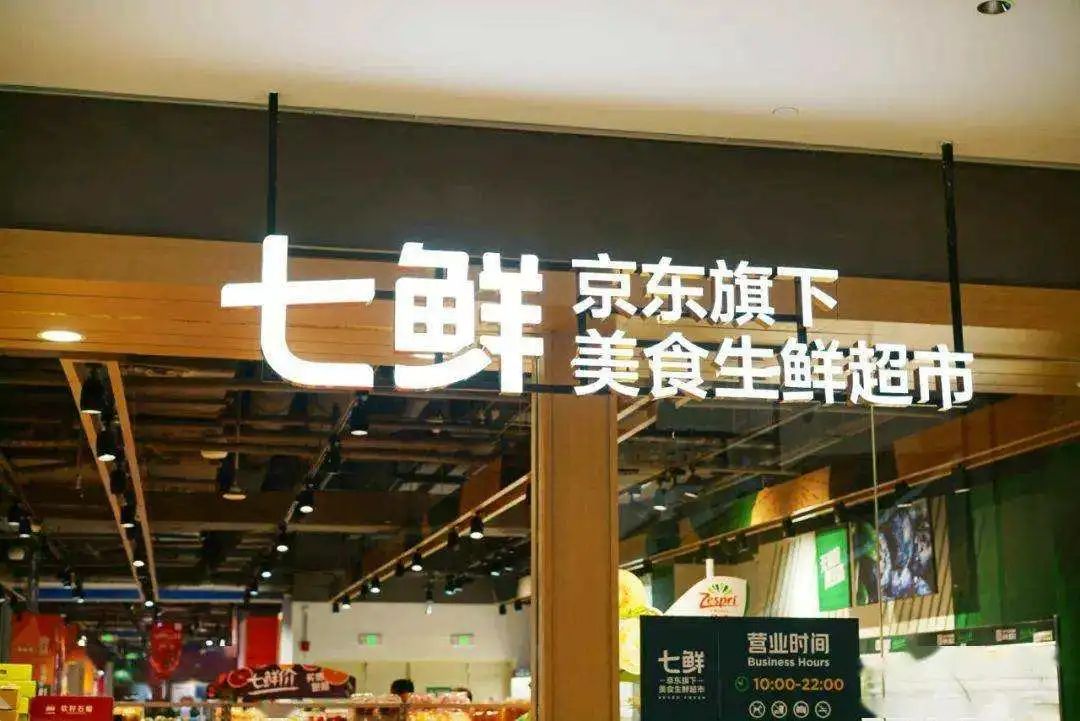 On July 22, the day of the summer solar term, McDonald’s China launched the annual “big potato day” Carnival. In addition to the half price big potato and one free one discount card coupon for big potato purchased in the wechat applet of “I McDonald’s gift card” from July 22 to 28, McDonald’s China also specially invited randomevent, a local Chinese designer brand, to make a special “100%” series around, including five items such as T-shirts, hats, picnic mats and folding chairs, and designated online stores for sale.
Heatstroke is one of China’s traditional 24 solar terms, and French fries are McDonald’s classic products. The two are homonymous with “potato”. Since 2015, McDonald’s China has held “big potato day” activities every year before and after the heatstroke solar term, inviting fans to “spend the summer with potato” to spend the hottest season of the year. 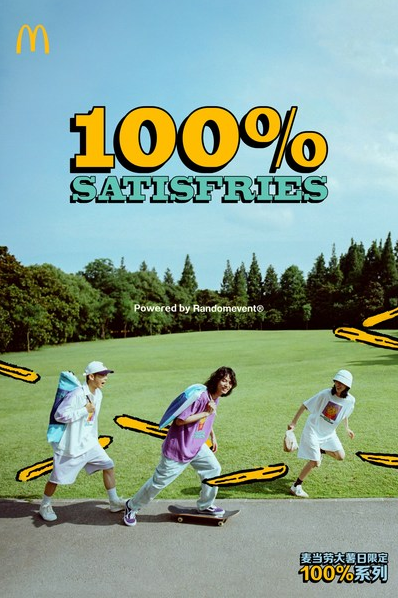