Just now, Nestle, the world’s largest food and beverage company, released a report card of strong growth in the first half of fiscal year 2021.

According to the latest data, in the first half of this year, the total sales reported by Nestle group increased by 1.5% year-on-year to 41.8 billion Swiss francs (equivalent to about 298.3 billion yuan), achieving an organic growth of 8.1% and an actual internal growth (rig) of 6.8%. The business growth was due to the strong growth of retail sales, the recovery of off home consumption channels, and the improvement of pricing and market share. 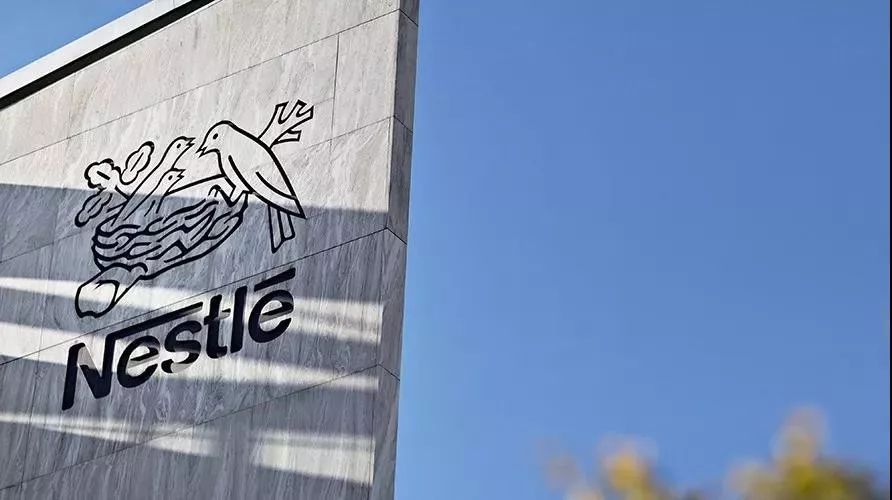 Nestle CEO Mark Schneider said in the financial report today that nestle achieved strong organic growth in most regions and product categories in the first half of the year, with strong retail sales momentum. The group also announced today to further raise its growth forecast for the whole year. It is expected that the annual organic sales growth will be between 5% and 6%, higher than the upper limit of the increase previously predicted by analysts. 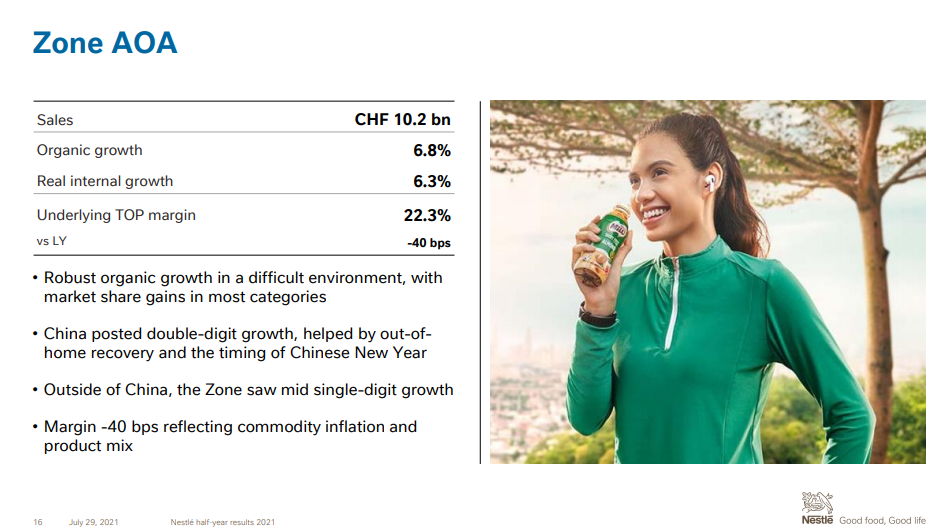 Based on strong organic growth and pricing contribution, Nestle achieved double-digit organic growth in the Chinese market in the first half of the year.

“Thanks to the recovery of outdoor consumption channels and the time of China’s Spring Festival, China has achieved double-digit growth.” Nestle pointed out that the largest contribution to the growth of the Chinese market is Nestle’s professional catering business, whose sales exceeded the level in 2019. In addition, coffee, condiments, dairy products and Purina pet care all achieved strong double-digit growth.

It is not difficult to find that many businesses of Nestle have moved frequently in the Chinese market since this year. 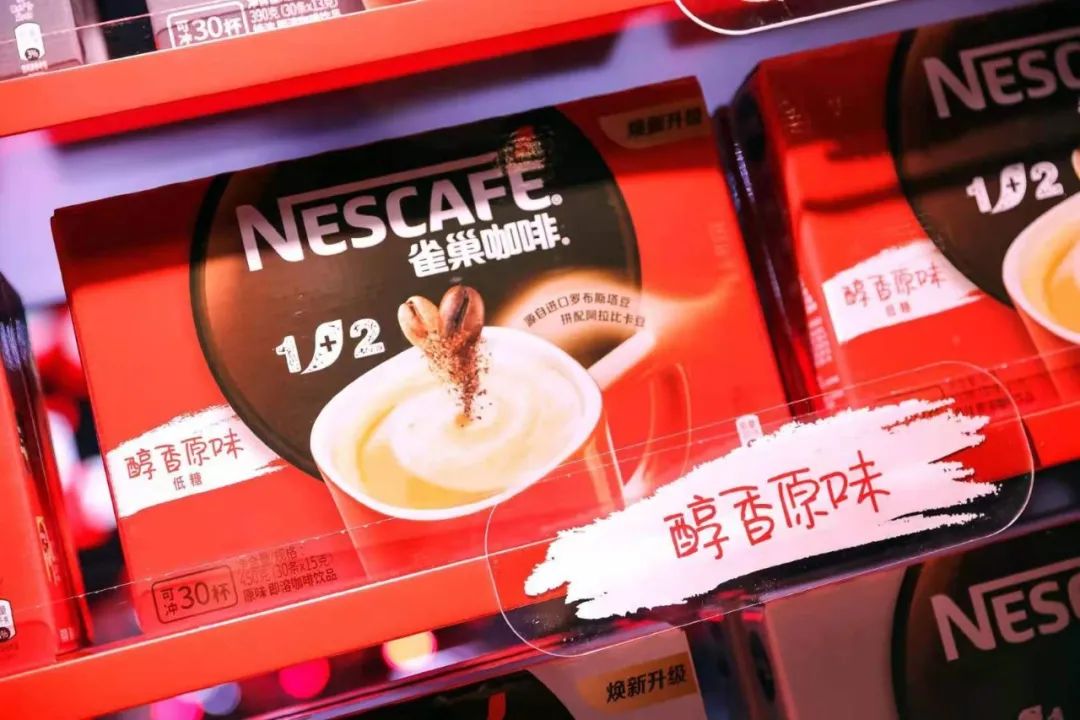 In the coffee business, Nestle 1 + 2 instant coffee announced a comprehensive upgrade in May this year, changing the taste from single beans to double beans, and released a new brand concept. Nongyu coffee, a capsule coffee brand belonging to Nestle group, also announced recently that it will officially introduce its vertuo Fuxuan series into the Chinese market.

In terms of pet food, in April this year, Nestle announced an increase of 230 million in China to increase the production capacity of high-end and ultra-high-end products of Tianjin pet food factory. In less than a year, the business has successively announced two investment plans with a total amount of more than 800 million yuan, becoming the highest investment business among a number of investments announced by Nestle since last year. 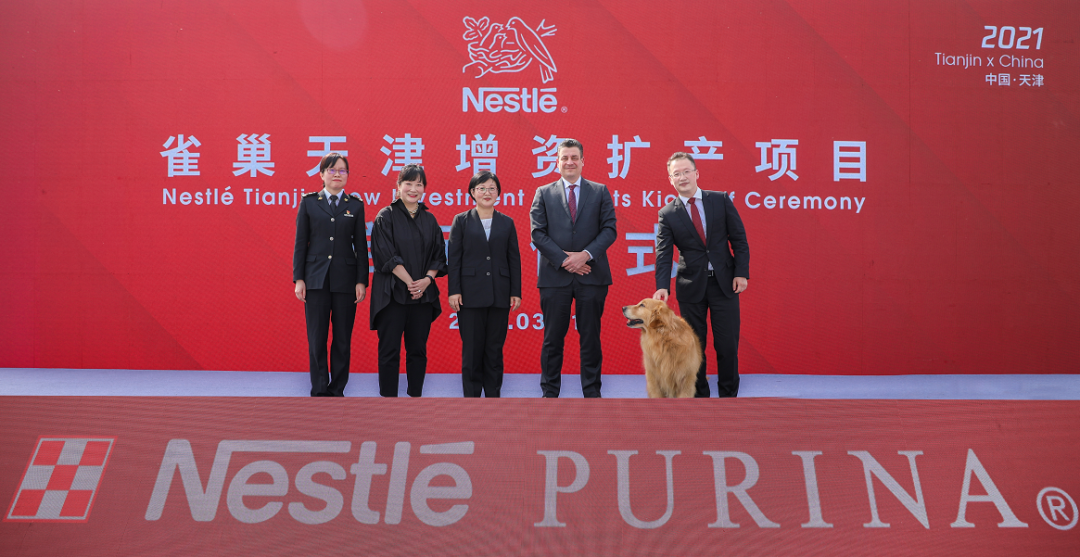 After the outbreak last year, China has become Purina’s fastest-growing market in Asia, Africa and Asia. The business also put forward the enterprising goal of “maintaining high double-digit growth in the next decade” in China. In addition to capacity expansion of Tianjin plant, the long-term plan also includes technology upgrading, channel integration, investment and M & A.

In addition, Nestle dairy products has taken the mining of functional products as a new breakthrough direction in China. 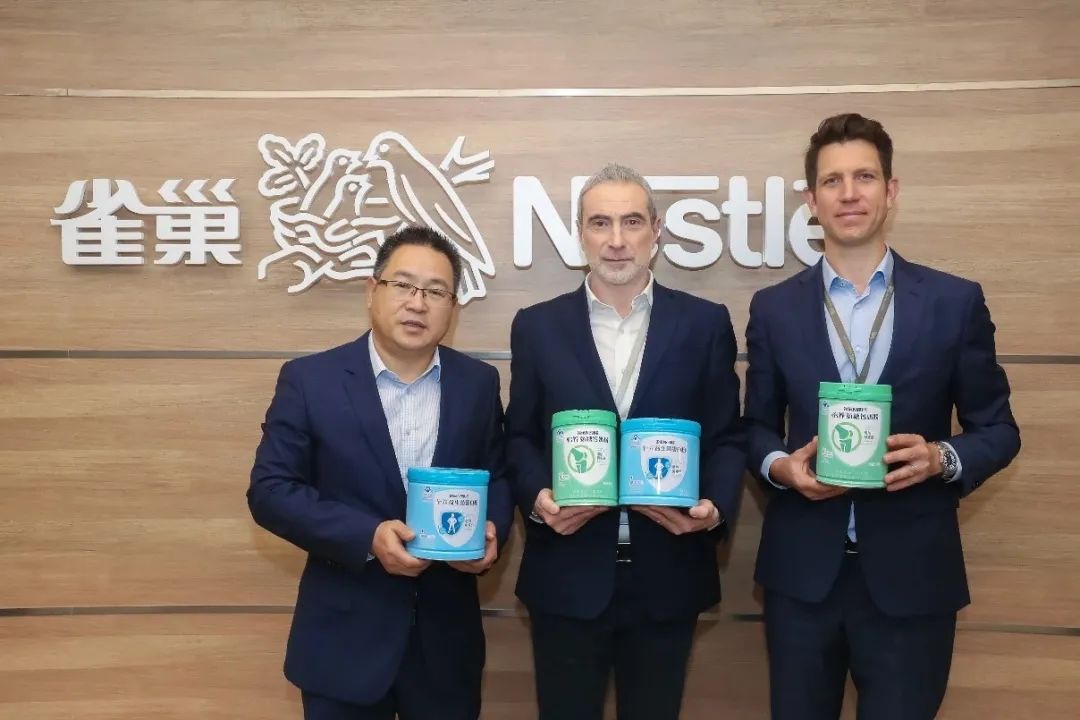 Angelo Giardini, senior vice president of Nestle’s dairy, ice cream, industrial raw materials and candy sales business unit in Greater China, previously revealed that nestle will continue to develop and try to apply for other health food in the future.

In March this year, Nestle launched the Nestle BEBA supreme Series in cross-border e-commerce. Wyeth illuma also launched two new products in April and June, including illuma Yunchun, which is known as the “most important product in China”, and illuma future, which focuses on adding six HMOs across the border. Data show that the cross-border Wyeth product line recorded double-digit growth during 618 this year. In addition, compared with 618 last year, illuma organic also recorded an increase of more than 150%. 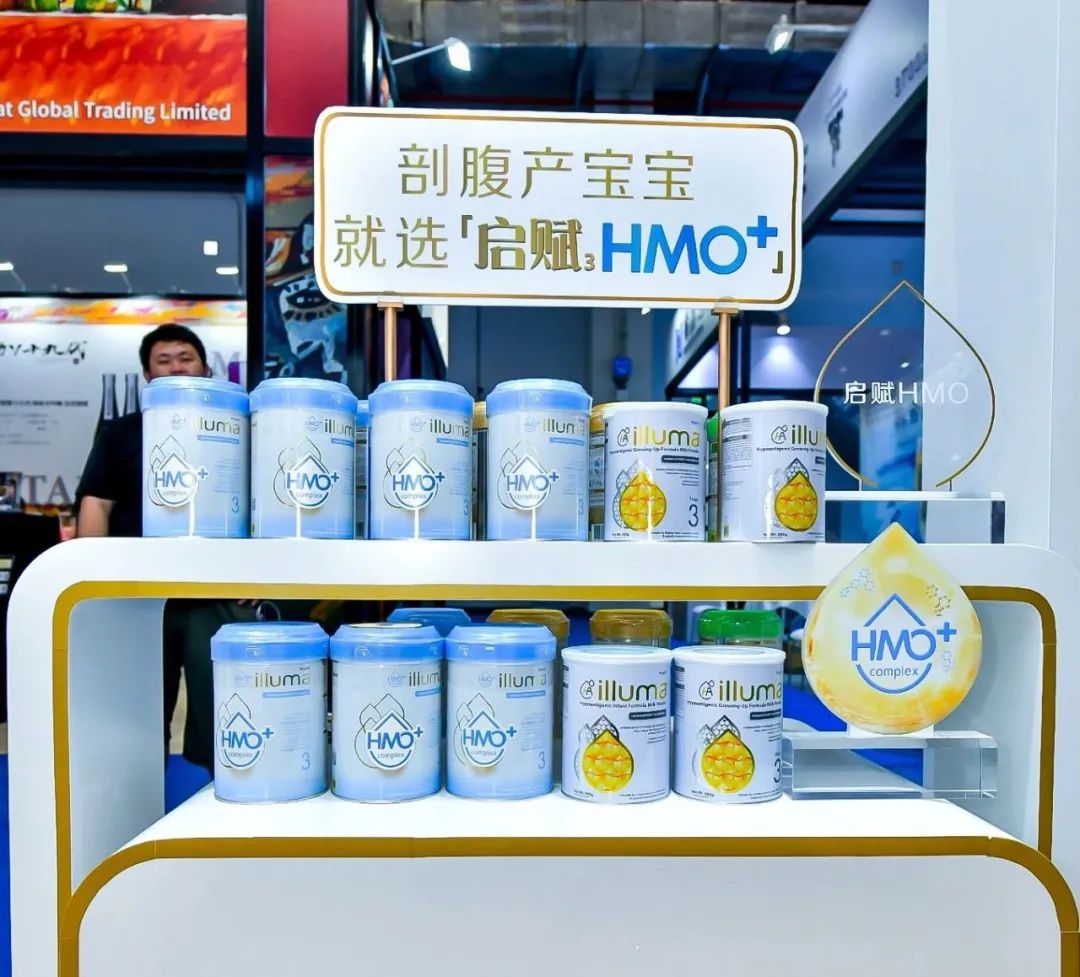 Nestle Greater China Chairman and CEO Luo Shide previously described Wyeth nutrition as the core of Nestle group’s nutrition, health and happiness (NHW) strategy, has always been an important contributor to the group’s business, and has “the most valuable brand assets and strong team in the industry”.

Snack generation once introduced that earlier this year, Schneider said that although Nestle faces the challenges of birth rate and local brand competition in the Chinese market, it is coping with it by improving the penetration of low-line cities and launching new products. At the same time, it emphasizes that China is the largest infant formula market, and nestle is very committed to achieving long-term success here.

Let’s take a look at the overall performance of Nestle group.

According to the financial report, Nestle’s business growth in the first half of the year covered most business areas, of which the organic growth rate in developed markets was 6.7%, mainly based on actual internal growth; The organic growth rate in emerging markets was 10.0%, mainly due to the contribution of strong real internal growth and pricing growth.

“Through fast-paced innovation, strong brand support, more digital applications and strict portfolio management, we have laid the foundation for stable medium single digit organic growth in the next few years.” Schneider pointed out in his briefing today that nestle group’s business has achieved strong organic growth in most regions and product categories, retail sales have increased strongly, and consumption channels outside home have also resumed growth. 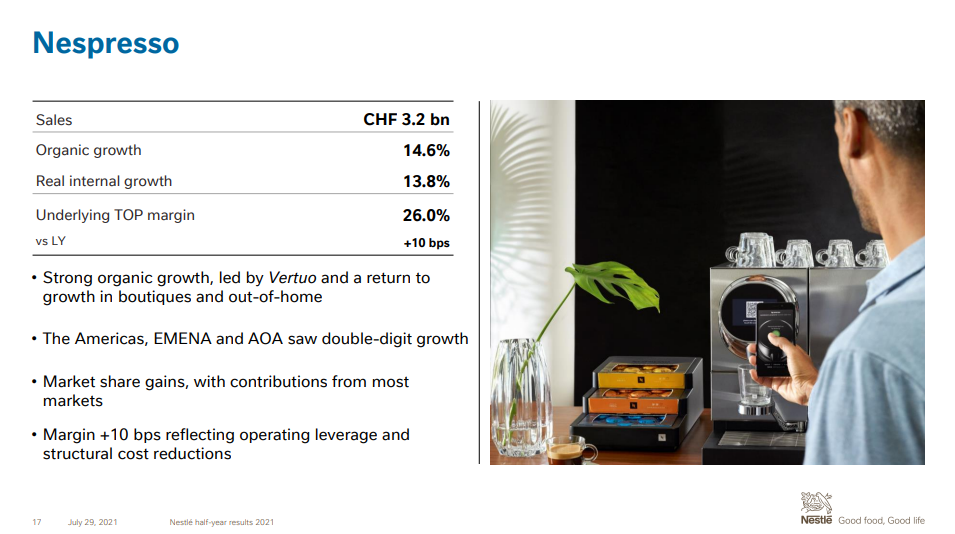 Among all product categories, the coffee business contributed the most to the group’s organic growth, with an organic growth of 11% in the first half of the year, mainly due to the strong demand of consumers for Nestle coffee, espresso coffee and Starbucks. Among them, Starbucks products increased by 16.7% and its sales in 79 markets reached 1.4 billion Swiss francs.

On July 26 this year, Nestle and Starbucks further cooperated and launched ready to drink coffee in specific markets in Southeast Asia, Oceania and Latin America. 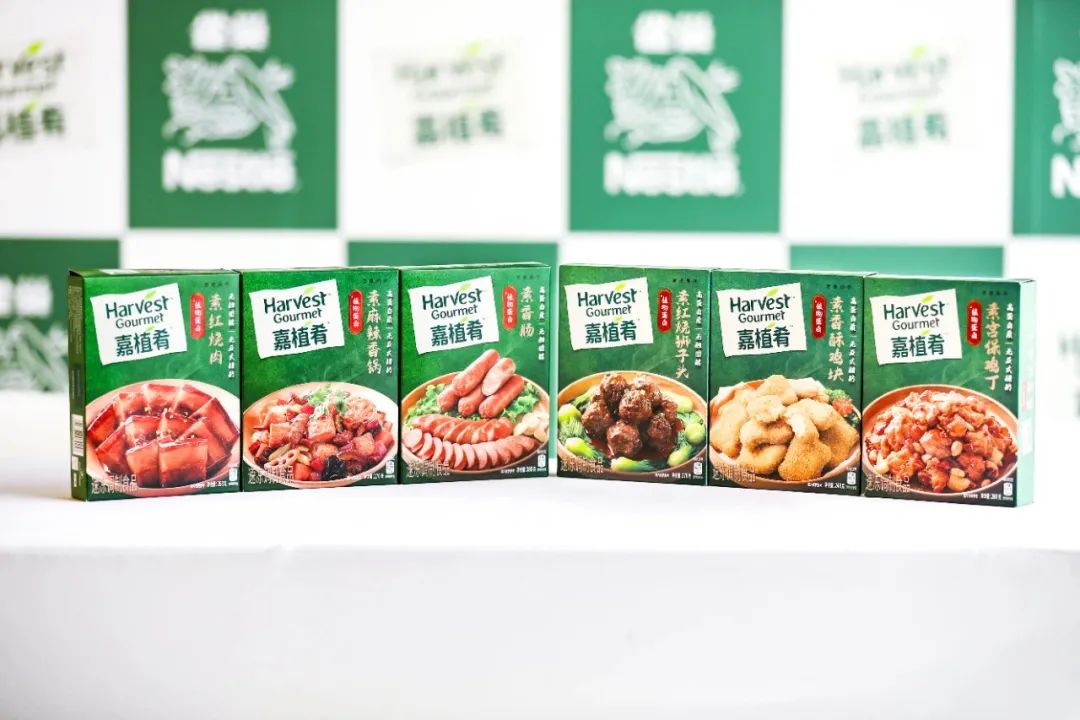 In addition, pet care brands such as Purina Guanneng, Purina one and Felix, vegetarian and plant-based foods represented by Jiazhi cuisine brands, and candy business driven by the strong growth of improvised products all recorded double-digit growth.

Under the guidance of high-end brands San pello and Paris water, the water business has also recovered positive growth. 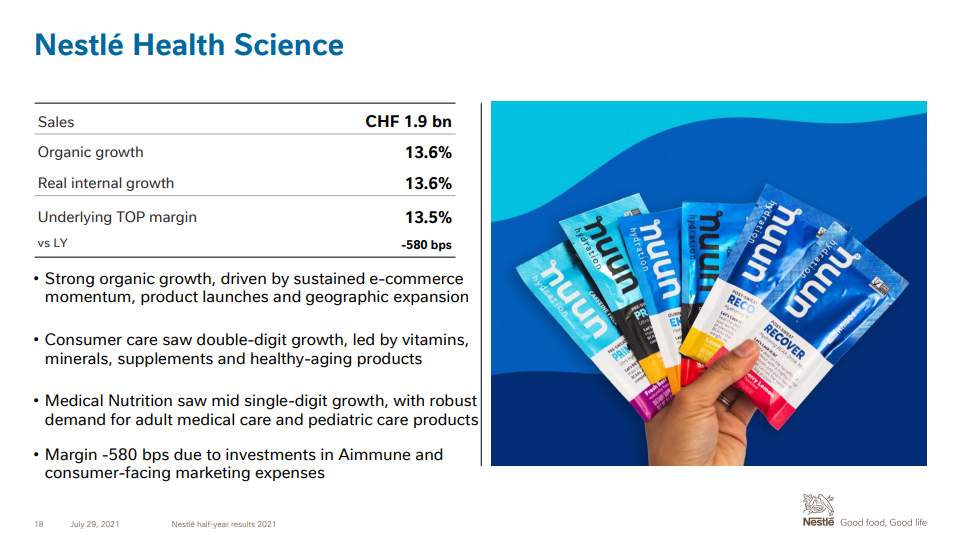 “Nestle Health Sciences’ sales grew at a double-digit rate, reflecting strong demand for vitamins, minerals and supplements and elderly health products.” Nestle also pointed out that the sales and market share of infant nutrition declined, but gradually stabilized during the period of COVID-19’s birth rate.

From different channels, retail sales achieved an organic growth of 7.3%, and e-commerce sales increased by 19.2%, accounting for 14.6% of the group’s total sales, including coffee, Purina pet food and condiments. Thanks to the relaxation of restrictions on the flow of organic channels outside the home, the growth rate was 21.3%.

The report also pointed out that Nestle is trying to cope with the soaring cost of impacting profit margins. Due to its well-known brands such as coffee and Purina pet food, Nestle may be more capable than other companies to offset rising costs by raising prices and improving efficiency. 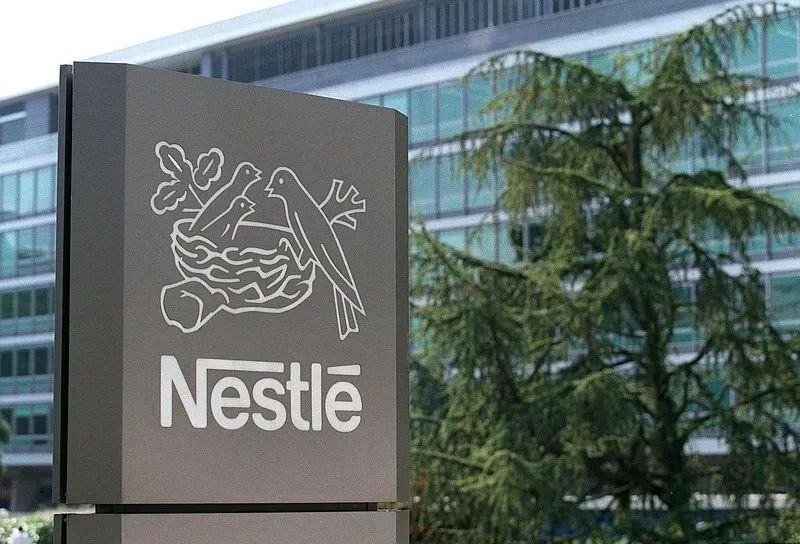 The Financial Times reported that nestle handed over its strongest growth report card in the first half of the year in more than 10 years, driven by consumers’ increased consumption of coffee and nutritional supplements during the epidemic. Analysts were impressed by Nestle’s growth data and believed that the company seemed to have an advantage over other companies in the consumer sector in managing price increases, the report said.

“After 2021, our medium-term expectation of moderately improving profit margin remains unchanged, while the basic earnings per share and capital efficiency in fixed currency are expected to improve this year.” Nestle said in the financial report.

Today, Schneider also talked about more ideas and measures for sustainable growth in the future. He pointed out that nestle will continue to invest in future profitable growth. 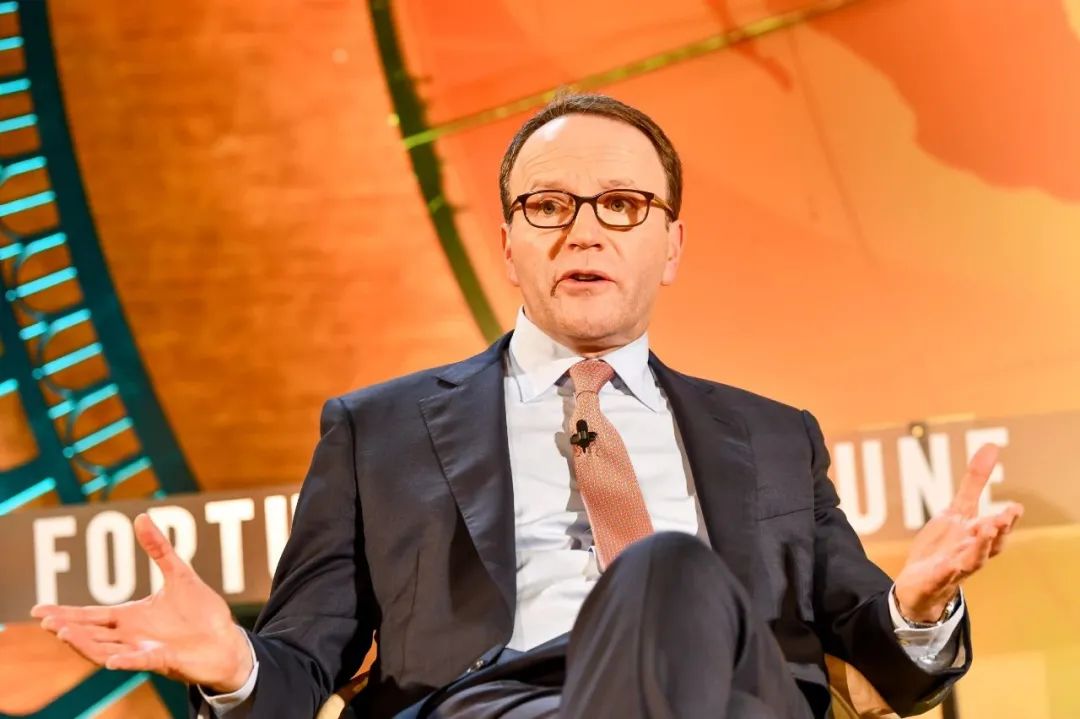 “By acquiring the core brand of the bountiful company (” bountiful “), we are creating a global leader in vitamin, mineral and supplement products. Our cooperation with Starbucks extends to ready to drink coffee, which will open up new opportunities in the rapidly growing market environment. Our portfolio selection, strong execution and bold action on sustainable development enable us to create value for all stakeholders. ” Schneider pointed out.

Xiaoshidai once introduced that in April this year, Nestle announced that the group was negotiating a full or partial acquisition of bountiful, but did not disclose the transaction price. At that time, the Wall Street Journal reported that the transaction price was about $5 billion (mid single digital bills, about 32.4 billion yuan). Bountiful’s natural treasure and met RX have previously entered the Chinese market.

Nestle disclosed in its financial report today that its acquisition of bountiful’s core brand is expected to be completed in August.