Summer is the peak season for beverage consumption, and it is also a critical moment for beverage companies to sprint their annual performance. Pepsi doesn’t want to miss it. In this summer, Pepsi Cola and Shanghai Disneyland Resort ushered in surprise parties. Pepsi Cola carefully created a series of surprises, saying that “everyone should hit it off with their love and meet their dream surprises”. I believe it will be favored by many consumers. 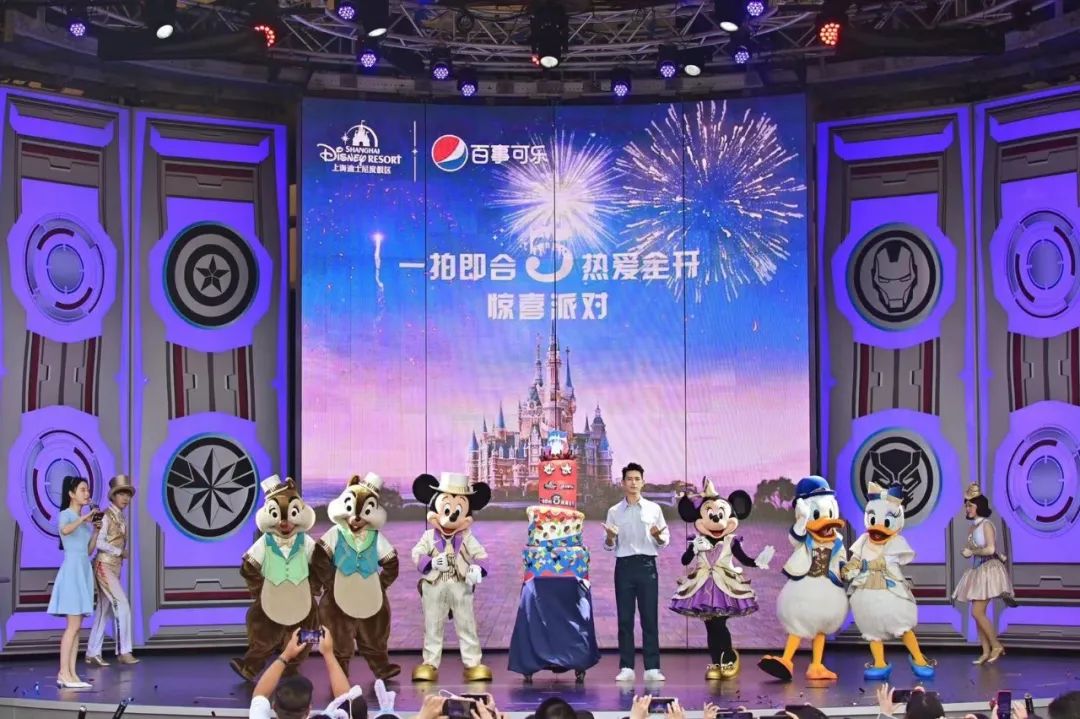 As a well-known beverage brand, under the background of numerous new products and consumption upgrading, how does Pepsi Cola push through the old and bring forth the new and seize the current local consumer group? We might as well take a look at the series of actions it and Shanghai Disney jointly celebrated their fifth birthday.

Grasp the keyword of “interest”

Pepsi Cola, as an enduring beverage brand, is inseparable from its emphasis on communication with young consumers. 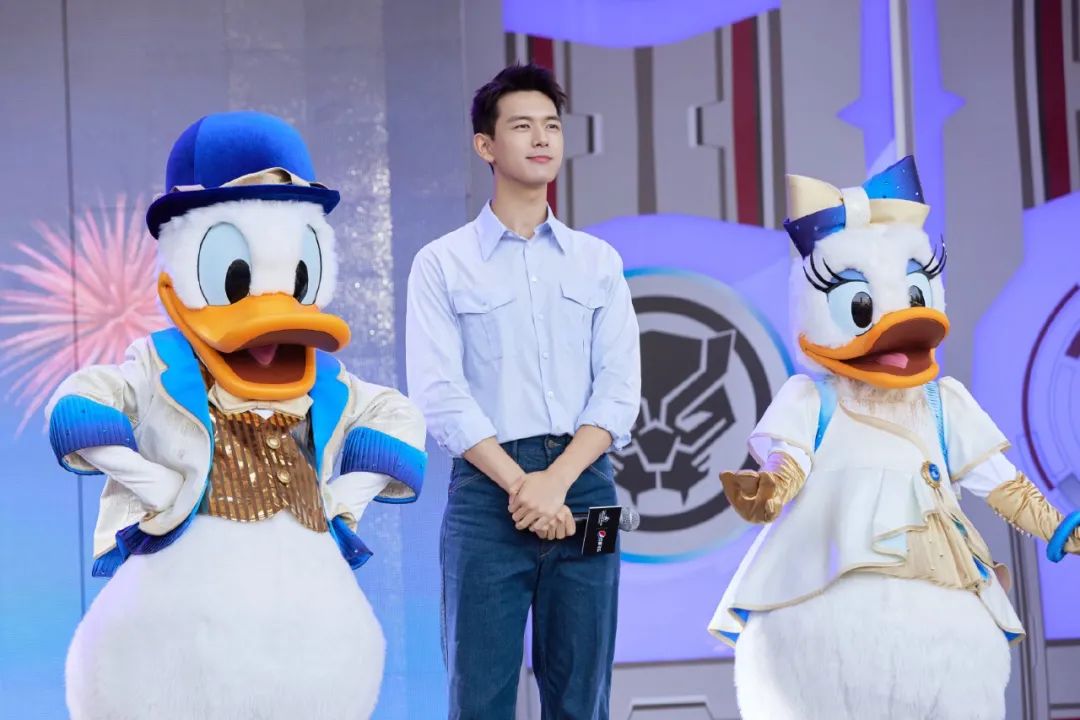 In terms of consumption preferences, young people pay more attention to whether the consumption experience is interesting and unique than buying a certain commodity. In addition, “beauty is justice” is applicable to all commodities and consumption behaviors for young people. Those commodities that are flattering in design can get the hearts of consumers to actively share. They are also willing to support what they love by buying peripheral products and following up topic interaction on major social platforms.

Ye Li, general manager of PepsiCo’s beverage business in Greater China and chief marketing officer and chief sustainable development executive officer of PepsiCo’s Asia Pacific region, mentioned this insight in an interview with snack generation in 2019, “freshness is very important for young people. A survey shows that 83% of consumers are very willing or more willing to buy products with novel and unique packaging, including product appearance and product name. 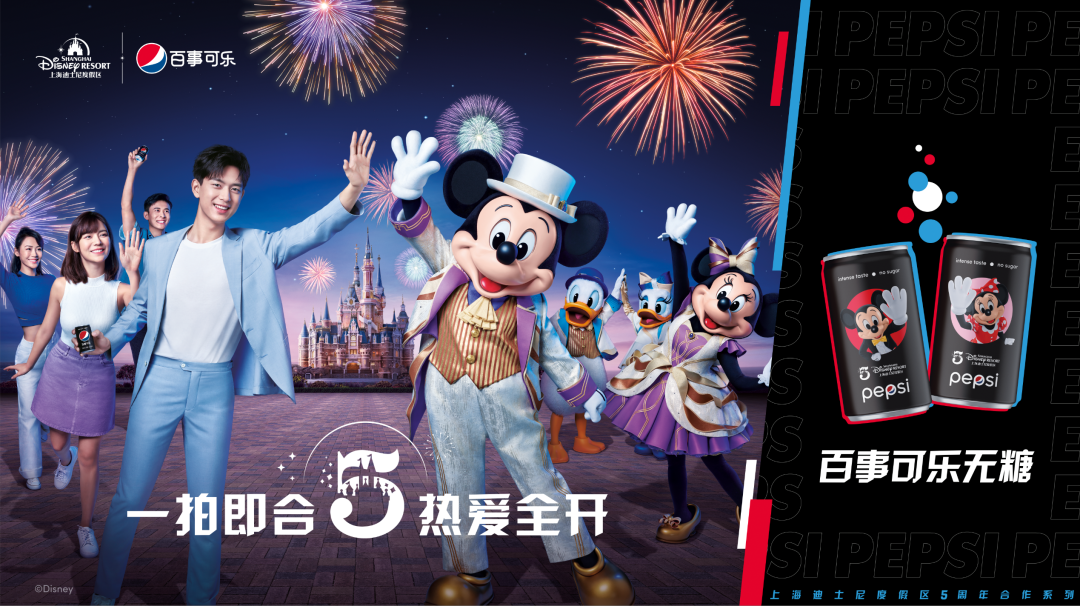 Linked with Shanghai Disneyland Resort, Pepsi Cola is also out of consideration to better communicate with young consumer groups.

As a well-known IP image in China, Disney has opened the “strange dream” Enlightenment of a generation and has a huge fan group; Since entering China in 1981, Pepsi Cola has been deeply rooted in the youth memory of generation after generation with its image of vitality and trend pioneer. They are all brand models with great global identity and committed to “delivering happiness and positive energy”, which are deeply loved by consumers. When the two sides work together to build creative products into an important carrier for brand emotion communication, I believe that many consumers will be willing to pay “the bill” out of their pockets out of emotion. 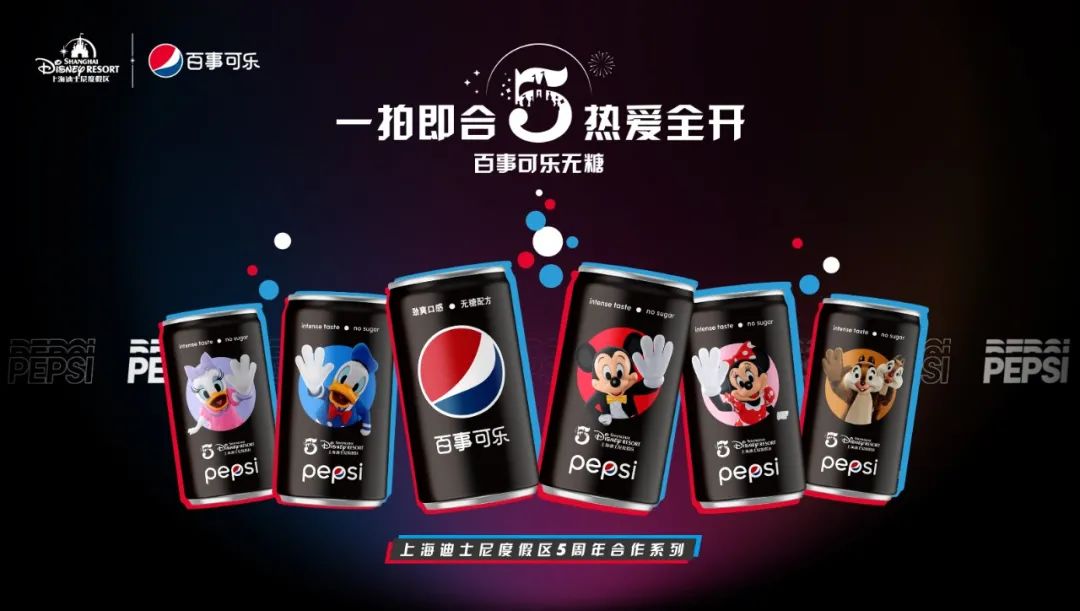 For the first time, Pepsi Cola printed the classic Disney characters Mickey, Minnie, Donald Duck, Daisy and the chichitti brothers on the cans, bringing them from Shanghai Disneyland Resort to consumers. These cute Disney partners lean forward and invite you to clap hands with them, providing a novel visual experience and conveying the concept of “hit it off and love it all”. In addition, the two sides combine the current black technology playing methods to bring the “Pepsi sugar free mini can” applet. Consumers can not only draw surprise gifts, but also share surprise moments with their friends. PepsiCo also invited spokesperson Li Xian and Disney partners to create themed blockbusters, integrating IP, music, dance and other elements to provide consumers with a fantastic experience.

Be a symbolic brand close to the young circle

Besides focusing on “brand rejuvenation”, localization is also one of the important strategies for the development of Pepsi Cola.

Pepsi Cola has gone deep into the Chinese market, continued to accompany local young people to pursue their favorite lifestyle, and launched a series of products and experiences close to young people and young family life. The long-term cooperation with Shanghai Disneyland Resort is one example.

Since its roots in China in 1981, China has been one of PepsiCo’s most important markets in the world. Not long ago, at the celebration of the 40th anniversary of PepsiCo’s roots in China, long Jiade, chairman and CEO of PepsiCo, affirmed this and said, “China is one of the engines of the company’s growth.” 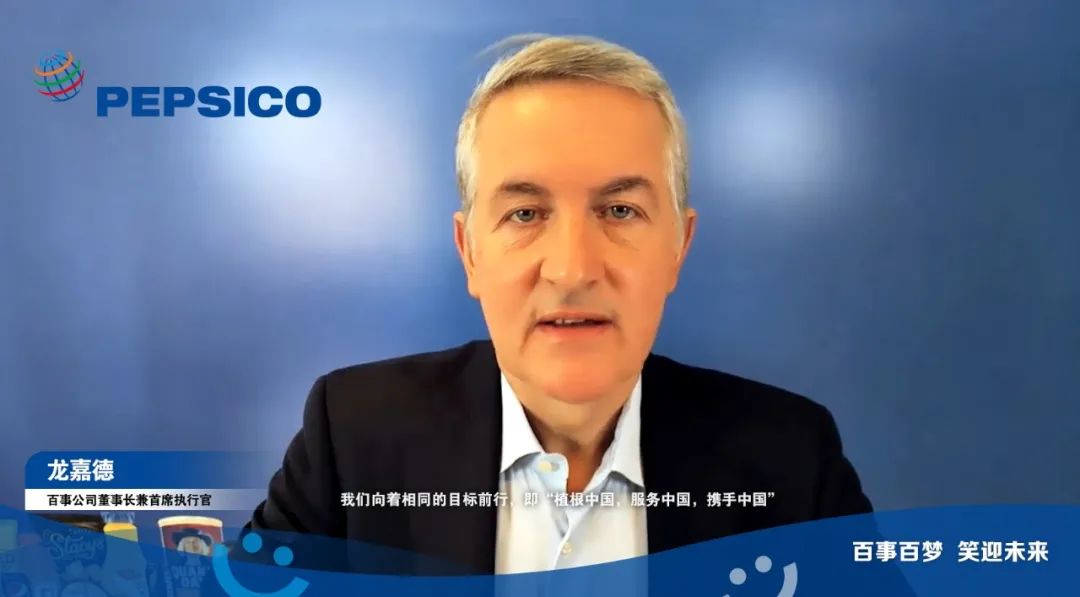 The vigorous development of China’s localized market has also brought brilliant performance to PepsiCo. According to PepsiCo’s 2020 financial report, its net income in the Chinese market has achieved double-digit year-on-year growth for two consecutive years.

Xiaoshidai learned that PepsiCo’s products in China, whether drinks or food, adhere to the principle of “focusing on Chinese consumers”. In 2012, PepsiCo established PepsiCo Asia R & D center in China, which is the largest and most integrated R & D center established by PepsiCo outside North America to develop tastes and products to meet the needs of consumers in China and the Asia Pacific region. 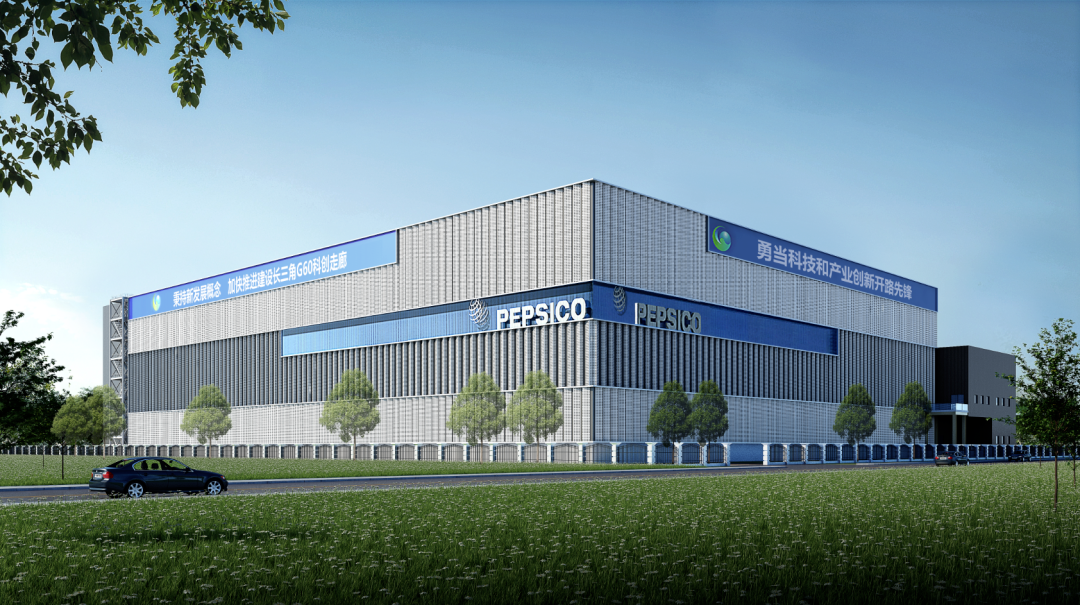 In recent years, according to consumers’ eating habits, Pepsi has successively launched Pepsi Cola sugar free and osmanthus flavor Cola of Taiqi series integrating Chinese traditional culture, as well as Baitao Oolong flavor Cola of Taiqi series launched this year. With international categories and Chinese elements, PepsiCo has creatively made the eastern and Western cultures collide in this small bottle of carbonated drinks, which has successfully attracted the attention of young consumers. 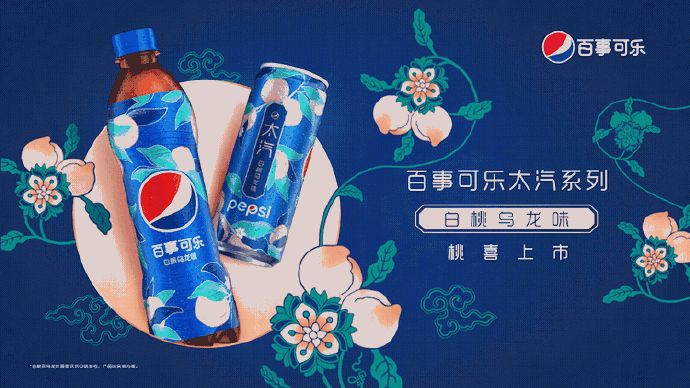 In terms of marketing, Pepsi Cola is committed to in-depth publicity with culture and connotation. Pepsi Cola has invested 10 years to successfully shape the value of “bringing music home”; Hand in hand with “made by mother” to protect and inherit the ancient Tibetan intangible cultural heritage; Inject the new power of Chinese traditional culture into PepsiCo Gainian store, and revitalize the era value of traditional heritage with the concept of Sustainability… Various activities have successfully realized the spiritual communication between Pepsi Cola Brand and contemporary young groups. 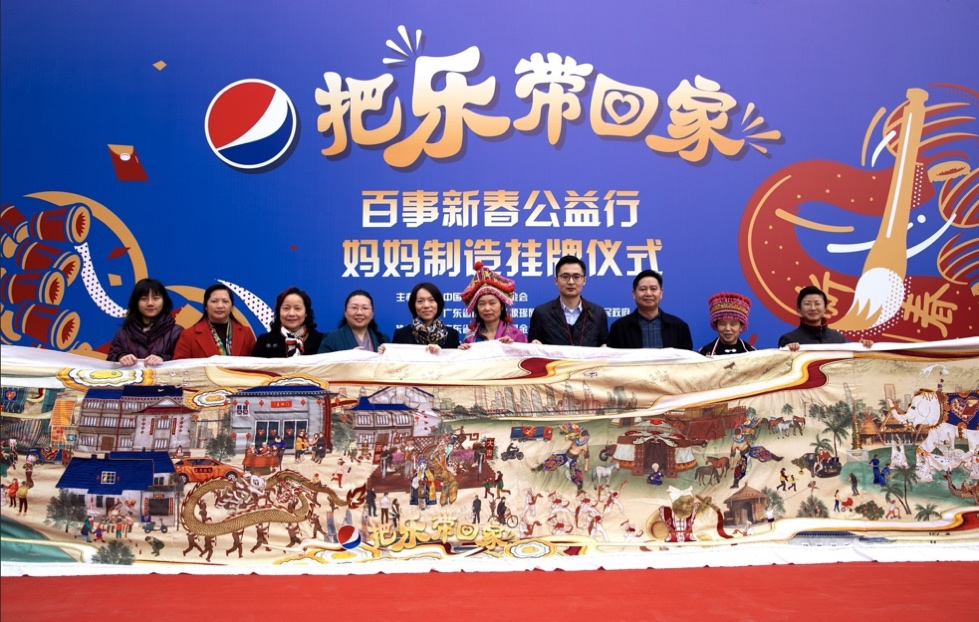 Whether the cooperation with Shanghai Disneyland Resort or the localization innovation strategy as always, PepsiCo has found emotional contacts that resonate with young people in order to meet the spiritual needs of young consumers. As PepsiCo said earlier, “the formula of Pepsi Cola has not changed for more than 100 years, so it is more innovative in communication methods to convey to people that Pepsi Cola is an enduring brand. In addition to expression innovation, product innovation is also very important. ” In the future, PepsiCo will also comply with market demand and provide Chinese consumers with more value-added products and experiences.