Yesterday, Ruixing coffee announced that the company signed a settlement letter of intent of US $187.5 million (about RMB 1122.8 million) with the plaintiff representative of the US class action lawsuit, which is far lower than the previous speculation of the legal profession on the matter – in December last year, a lawyer predicted that Ruixing coffee may face a total of about US $11.2 billion in investor litigation compensation. However, Ruixing also pointed out in the announcement that the settlement agreement still needs to be approved by the Cayman court supervising the conditional liquidation of the company and the U.S. court hearing class action.

In addition, as of July 31, 2021, Ruixing coffee had 4030 self operated stores and 1293 affiliated stores in China, with a total of more than 78.4 million trading customers. (CNR network) 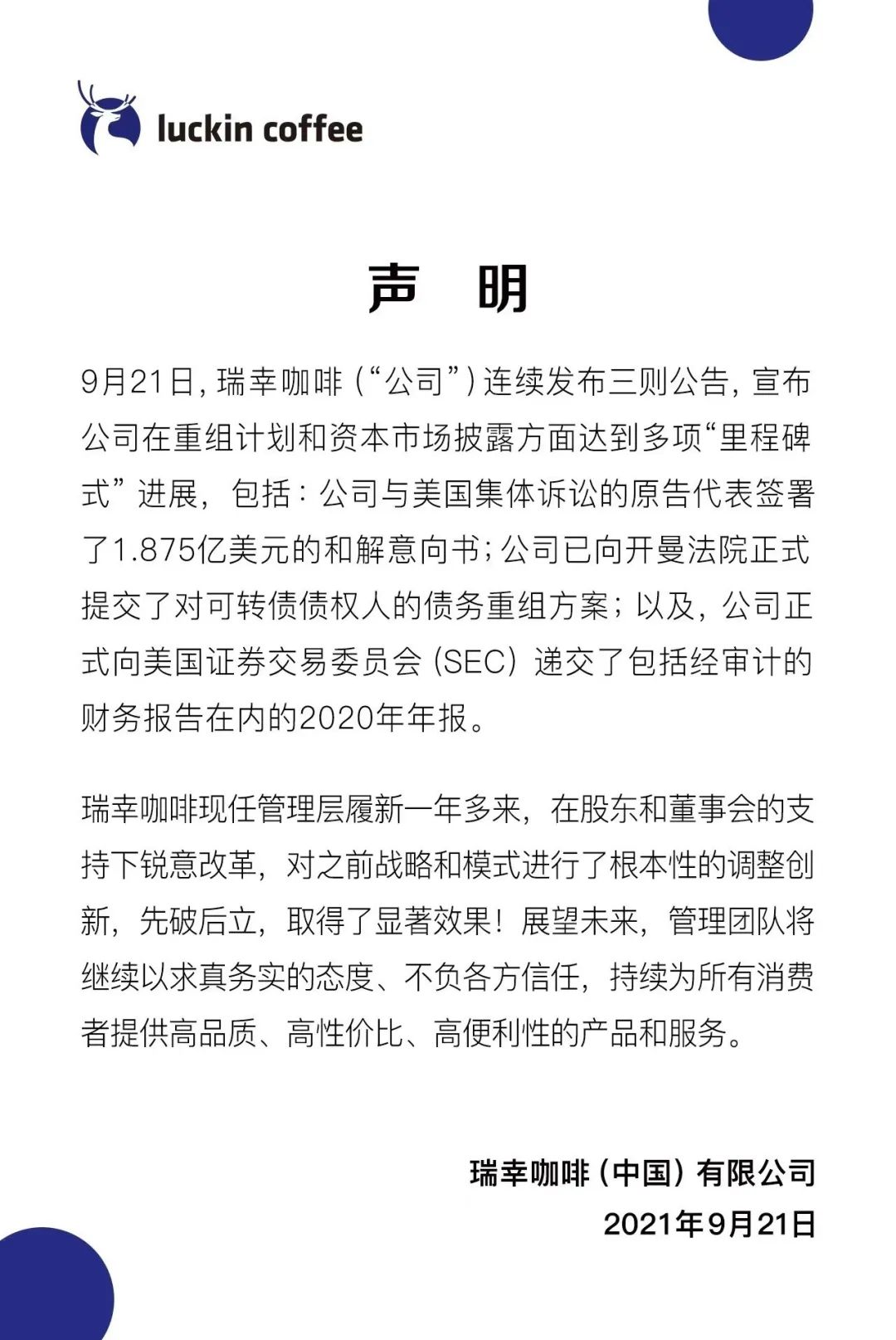 Recently, an institution called “Guanzi private equity fund management (Hangzhou) Co., Ltd.” completed the filing and registration in a low-key manner in the China Foundation Association, and its actual controller is Zhong Fuxin, founder of nongnongshan spring. At present, the number of executives of the company is 2 and the number of employees is 6, of which 4 have obtained fund qualification. (China Fund News)

Henan Kedi Dairy Co., Ltd. announced today that on September 16, 2021, the company received the decision on administrative punishment and market prohibition issued by Henan regulatory bureau of China Securities Regulatory Commission. According to the announcement, the company has illegal facts such as false records and failure to disclose information as required. The announcement also mentioned that the company’s current production and operation is normal, and it is preliminarily judged that the company has not touched on major illegal compulsory delisting. (company announcement)

McDonald’s announced that from today to the end of 2025, it will significantly reduce the amount of plastic in toys and gradually use green materials instead. The goal is to greatly reduce the amount of plastic in toys by 90% compared with the level in 2018 by the end of 2025. The company has carried out transition plans in the UK, Ireland and France since 2018 to gradually provide more sustainable toys. At present, the consumption of plastic has been reduced by more than 30%. (Hong Kong Economic Daily)

Recently, Wal Mart announced that it would label healthy and sustainable products with “build for better” on its website to attract shoppers who are willing to spend money to vote for better nutrition and environmental management. Wal Mart said that this measure will start with nearly 2000 kinds of goods and will continue to increase. (American Stock Research Society)

Today, yum! Brands announced that Sabir Sami, 54, was promoted to CEO of KFC and reported to David Gibbs, the company’s CEO. The appointment will take effect from January 1 next year. Sabir Sami has previously worked in the company for 12 years and currently serves as chief operating officer of KFC division and managing director of KFC Asia. (issued by the company)

Recently, good meat, an artificial meat subsidiary of American sustainable food company eat just, raised another $97 million after announcing that it raised $170 million in May. At present, the company’s investors include UBS O’Connor, graphne ventures and K3 ventures. Good meat plans to use this fund to expand production capacity by expanding production and accelerating R & D activities. （FoodBev）

Budweiser will launch its first zero carbohydrate beer bud light next early next year. This product will be aimed at younger and more health oriented drinkers who prefer to buy zero carbohydrate hard soda. Andy goeler, vice president of marketing of bud light, said that bud light next is part of the brand’s efforts to continuously “develop and innovate” for new audiences. （Stl Today）

Blue bottle coffee promises to be carbon neutral by 2024

In the first half of the year, the import and export volume of cross-border e-commerce increased by 28.6%

Mirakl, an e-commerce platform, received a round e financing of US $555 million

Recently, mirakl, a French online shopping service startup, raised US $555 million in the e-round financing. Silver Lake capital, Bain Capital and Felix capital participated in the current round of financing. The current valuation of the company, which has been established for 10 years, also exceeds US $3.5 billion. Mirakl’s main business is to support the online market of 300 companies. Mirakl has become an important ally for retailers eager to steal online business from Amazon. (Forbes China)