Yesterday afternoon, Miaoke Lando held the fourth extraordinary general meeting of shareholders in 2021, and Lu Minfang, President of Mengniu Dairy, also attended the meeting. That night, the latest personnel appointment results of Miaoke Lando were released. Lu Minfang was elected chairman of miaokelando, and chaixiu, the founder, was the vice chairman. Lu Minfang said that in the future, as the chairman, he would not participate in specific business operations. The management team of miaokelando remained unchanged, and the board of directors was responsible for the strategic direction and some large investment and financing. “It must be a 10 billion scale to be able to make friends with mikolando, otherwise the track will not be done well.” (International Finance News)

Many peach and plum bread factories were cut off

Last night, Taoli bread Co., Ltd., a bread manufacturer, announced that due to the tight power supply, Jiangsu Taoli, a wholly-owned subsidiary, had limited power and stopped production from September 25 to September 30; Dongguan Taoli, Changchun food, Shenyang Taoli, Dalian Taoli, Shandong Taoli, Tianjin Taoli, Dandong Taoli and Harbin Taoli actively cooperate with the power restriction measures according to the relevant notices of the local government on orderly power consumption. The power rationing will have varying degrees of production reduction impact on the above subsidiaries, and the specific impact cannot be accurately predicted for the time being. (company announcement)

On September 26, Shenzhen wenheyou officially announced the launch of a new field – “Laojie oyster market”, which is the biggest change since wenheyou entered Shenzhen and the first independent regional characteristic IP of wenheyou. In the view of some people in the industry, this is actually a “renaming” of Shenzhen wenheyou. Synchronized with the “renaming” is a deep-seated “localization transformation”. After the “renaming”, wenheyou will provide more “Oyster” products and local snacks in Shenzhen. (tiger sniffing)

The subscription of international rice noodles operating in Hong Kong is closed today. It is pointed out that the international plan is priced close to the second half of the offering, and the company’s bidding price is between HK $3.33 and HK $4.17. Previously, the news has indicated that its international placement has been fully subscribed. (Hong Kong Economic Daily)

Shuanghui development: pork price fluctuation will have a certain impact on the company’s operation

Yesterday, Shuanghui development said on the investor interaction platform that pigs and pork are the main raw materials of the company’s slaughtering industry and meat products industry respectively, and their price fluctuations will have a certain impact on the company’s operation. (Beijing business daily)

A new foreign investment is added to modern animal husbandry. The investment enterprise is Hainan Liangyuan Technology Co., Ltd., with a shareholding ratio of 100%. The company was established on September 27, 2021. Its legal representative is Jia Yutao, with a registered capital of 50 million yuan. Its business scope includes the import and export of goods; Technology import and export; Import and export agency; Veterinary drug management; Grain purchase; Food business (sales of bulk food), etc. (Leju Finance)

Recently, the civil ruling of first instance on the dispute over infringement of trademark rights between honey snow ice city and honey snow time affiliated companies was made public. The plaintiff Michelle ice city sued that the defendant maliciously imitated and maliciously “hitchhiked” in its trademark name, store decoration and other aspects, and the defendant company continued to use the Michelle time trademark after it was rejected, which constituted trademark infringement and unfair competition. The court held that the dispute between the plaintiff and the defendant should be resolved by the relevant administrative authorities, which did not meet the conditions for prosecution stipulated in China’s civil procedure law. The judgment result is that the lawsuit of Michelle ice city company is rejected. (Beijing News)

Recently, the list of Dutch infant formula dairy manufacturers registered in China was updated as follows: (General Administration of Customs) 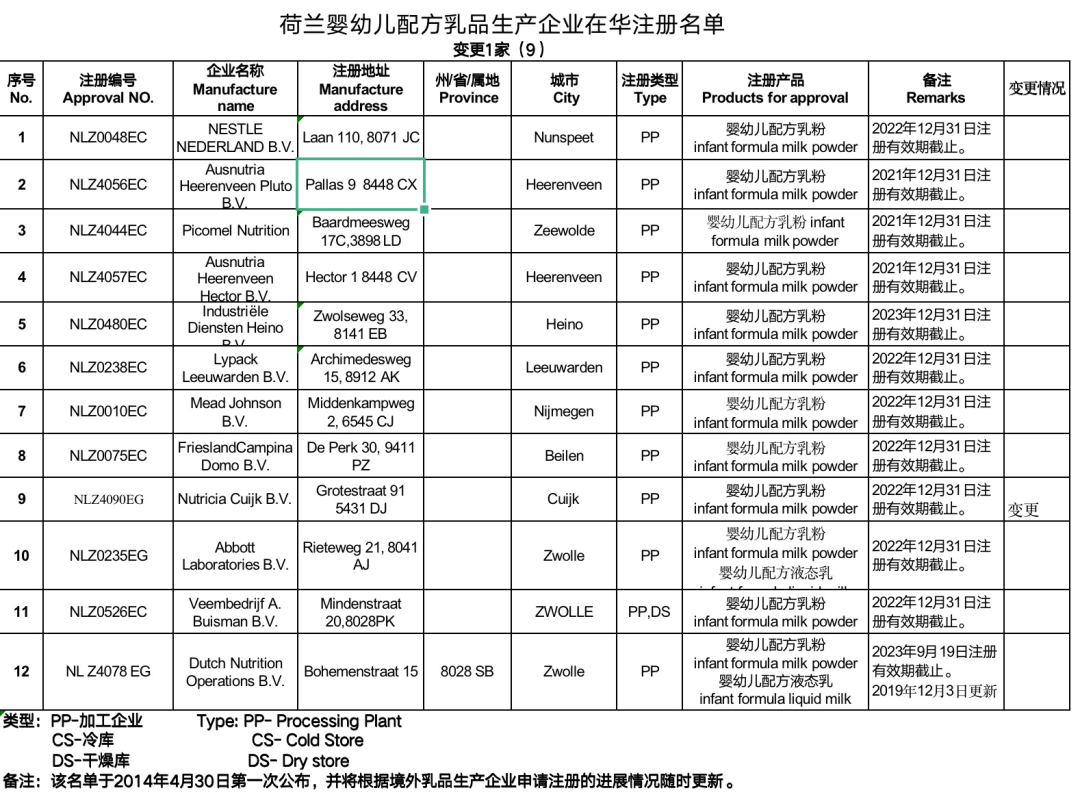 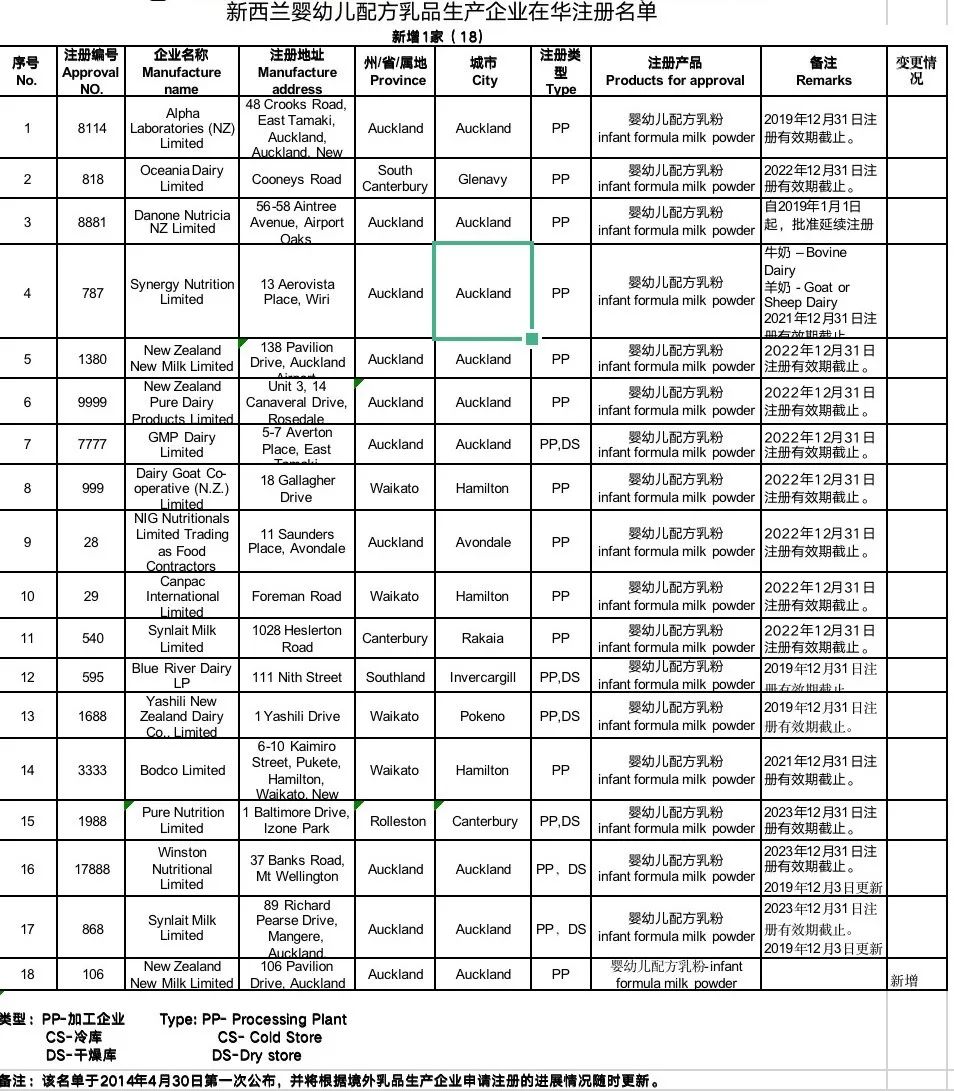 Recently, the review meeting of the 2021 Lee Kum Kee cup student innovation competition co sponsored by the Chinese society of food science and technology and Lee Kum Kee sauce group was held in Beijing. The theme of this competition is “Oyster life, fresh people step by step”. (issued by the company)

Today, Nestle China’s official wechat revealed that from 2018 to 2020, the proportion of railway transportation in Greater China increased from 10% to 15%, sea transportation increased from 7% to 12%, and highway decreased from 82% to 73%. As of July this year, various transportation modes have contributed 4767 tons of carbon dioxide emission reduction, and the coverage of new energy vehicle distribution has expanded from 27 cities at the beginning of the year to 77 cities, contributing 1312 tons of carbon dioxide emission reduction. (issued by the company)

Vita coco company, a US coconut water brand, submitted its listing application in the US yesterday. Founded in 2004 and headquartered in New York City, the company took the lead in launching packaged coconut water in the same year and recently began to expand to other health beverage categories. For the 12 months ended June 30, Vita coco company had sales of $334 million. (US IPO radar)

Danone said today that after seven years on the company’s Executive Committee, Bertrand austruy, the chief human resources officer and the company’s secretary general, had decided to leave. (issued by the company)

ROQUETTE warned of rising prices in the vegetable food market

French food producer ROQUETTE said yesterday that the surge in global pea prices was related to insufficient supply of plant protein and increased demand, which inevitably needs to be passed on to consumers and manufacturers of alternative foods such as meat free hamburgers. ROQUETTE said that the sharp decline in pea production this year was mainly due to the severe drought in Canada’s largest supplier, resulting in a 45% reduction in production and a 120% increase in prices over last year. Meanwhile, in France, crops are severely damaged by wet weather during harvest. (Reuters)

Today, the Information Office of the State Council issued a white paper entitled “China’s overall well-off society”. The white paper points out that China’s all-round opening to the outside world promotes win-win cooperation. Facing the trend of anti globalization, China unswervingly pursues the opening-up strategy of mutual benefit and win-win results, adheres to the development of a higher-level open economy, promotes the formation of a new pattern of comprehensive opening-up, and provides more market opportunities, investment opportunities and growth opportunities for all countries. (Xinhua News Agency)

Alibaba responded that its applications have been connected to wechat payment

Today, some media reported that Alibaba’s hungry, Youku, barley, koala Haigou, Shuqi and other apps have been connected to wechat payment, and taote, Xianyu, HEMA and other apps have also applied for access to wechat payment and are waiting for wechat review. In this regard, the relevant person in charge of Alibaba group said: “the news that Alibaba’s applications have successively accessed wechat payment is true. Alibaba firmly believes that sharing, connection and openness are the basis of a healthy digital ecology. We will continue to face the future together with other platforms.” (surging News)

Chinese sellers under the “most stringent Title tide”

Under the environment of “shutdown” in some parts of the world, China’s foreign trade has walked out of an independent market. According to the data, in 2020, 42% of Amazon’s top sellers were Chinese sellers, and the proportion of Chinese cross-border e-commerce on Amazon’s US website has reached 63%. However, since the end of April this year, Amazon’s “title” incident has aroused huge waves in the industry. The industry uses “how hot last year, how tragic this year” to describe the situation of cross-border e-commerce head sellers. (First Finance)