Xiaoshidai learned today that according to the latest “war report”, KFC still firmly occupied the first place in the list of food to store vouchers on the double 11 this year – this is the third year that KFC has been the top of the list. In addition, KFC continued to win the second place in tmall’s double 11 Carnival hot selling list – fresh food list this year. 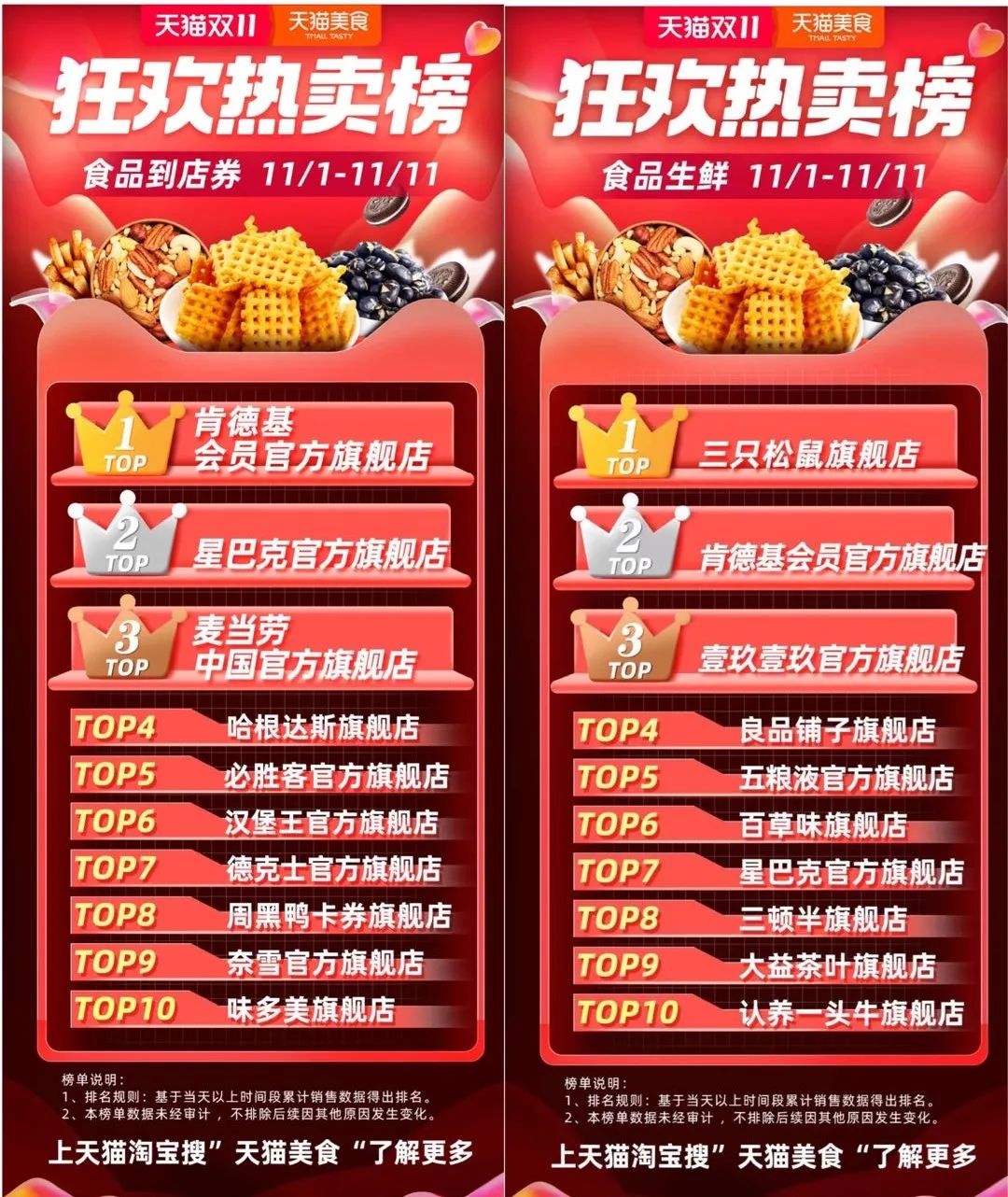 However, what is more striking is that according to statistics, during the promotion of the double Eleventh National Congress of KFC this year, the Gmv (i.e. total transaction volume) of global e-commerce exceeded 320 million, setting a record high for the brand. With more and more traffic grabbing and more players, it is not easy for top brands to continue to grow on the double 11. How does KFC do it?

We might as well taste KFC’s playing style together.

An obvious change is that KFC has more “battlefields” on the double 11 this year, which has brought new traffic and sales increment.

Xiaoshidai noticed that KFC had three main battlefields on the double 11 in previous years: the first was platform e-commerce tmall; The second is local life e-commerce, including word-of-mouth and meituan; The third is its own platform, namely KFC super app. This year, the tiktok has opened up the “fourth battlefields”, and has made an effort to get electricity from the interested parties. For the first time, the eleven battle has been promoted.

“This year’s double eleven, we are the layout of the tiktok, all channels are in the force.” KFC officials told today that “the last eleven, we still have the main line of Ali, that is, mainly in Tmall, plus word-of-mouth platform. This year, we have joined the new platform, which was completely absent last year.”

Although no relevant data were disclosed, the above official disclosed to the snack generation that the GMV of the eleven year old tiktok platform for KFC is quite impressive.

This is also due to the early accumulation of tiktok on the new business platform. Ktiktok introduced that KFC started its live broadcasting with its vibrato at the end of 2020, and opened its official account, KFC tiktok, to regularly broadcast itself, becoming the first restaurant brand to try to broadcast itself in the jitter. It is reported that the “KFC food and goods Bureau” broke through one million Gmv per game in two weeks and broke through the cold start period in less than a month, that is, the fans of the new account accumulated from 0 to 1 million. After only four months of operation, the single live broadcast broke through ten million Gmv.

Ktiktok has built 11 tiktok on the trill since June this year, including Changsha, Suzhou, Liao Ji, Guangzhou, Shanghai and Wuxi, and gradually expanded the self broadcasting matrix of the brand on the platform. It is reported that these local numbers are operated by KFC’s marketing teams around the country. They are broadcast live according to local marketing needs. Sometimes local restaurant employees will interact with consumers in the live broadcast room to introduce KFC products and preferential benefits in detail, which will also better shorten the distance between the brand and consumers.

Tiktok searches KFC, and the matrix numbers have been established.

All this is prepared for KFC’s eleven tiktok explosion.

Tiktok, in November this year, took the opportunity of double eleven to truly connect its location on the vibrato. 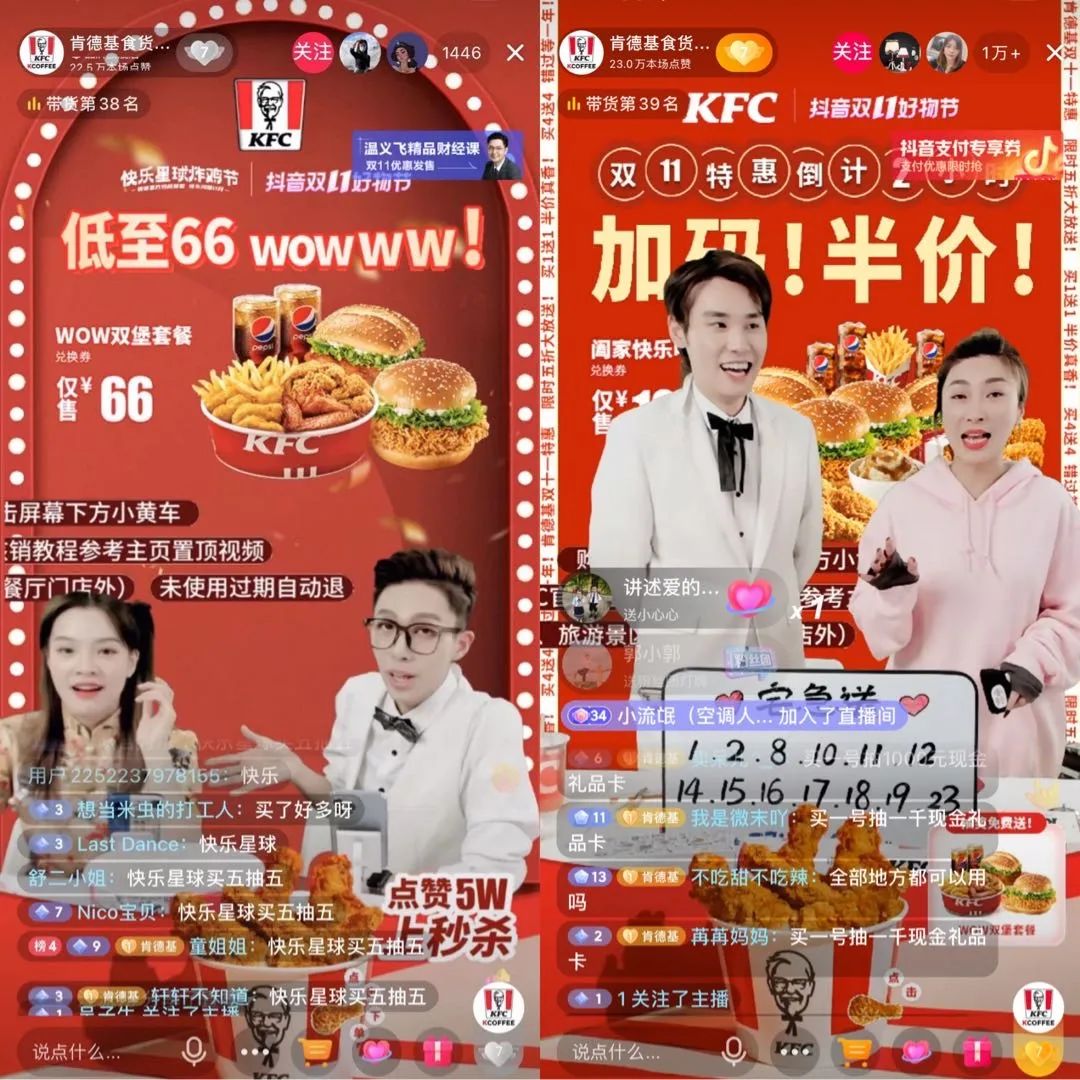 However, this does not mean that the contents of all local numbers are completely consistent. We found that under the atmosphere of promotion, local numbers will also have their own characteristics. For example, the configuration of people and goods yards in the live broadcasting room will be customized according to the preferences of consumers in different places. 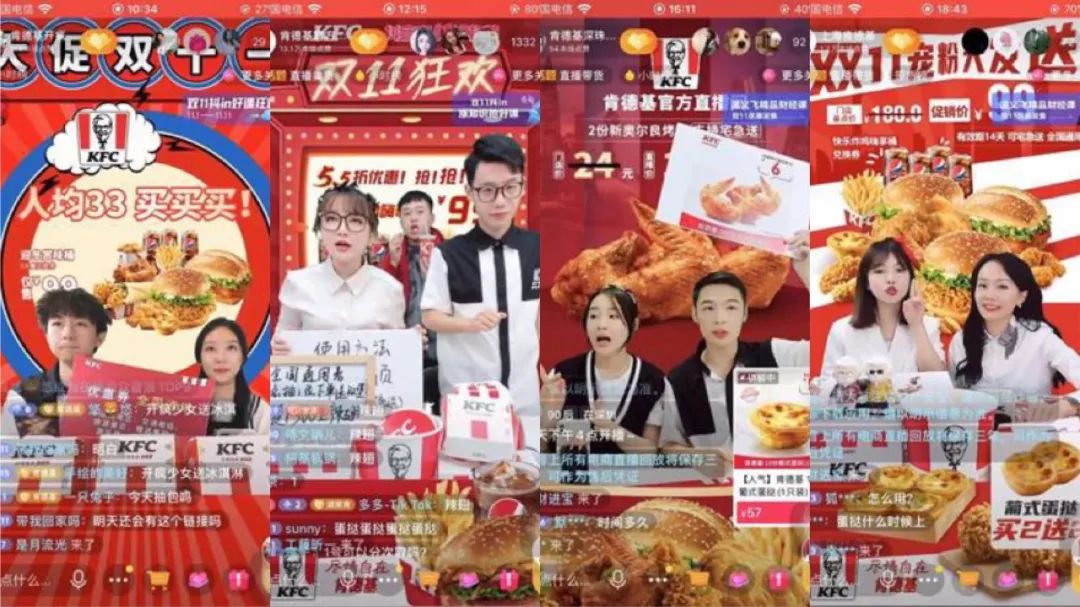 And during this event, we observed that the commodities of the live room were more abundant. Tiktok sold the tickets on the flick sound before the single ticket, but this time it launched the new coupon and the large electronic gift card. From the price point of view, this tiktok is the biggest concession on the sound.

A very special point is that “KFC free kitchen” not only has ordinary express logistics distribution, but also has the function of o2o real-time distribution, which is rarely used by businesses on tmall platform. In other words, when consumers place an order on tmall, they can choose to make an appointment for the arrival time of the day, distribute goods by KFC stores, and send them home by house express riders “After placing an order online, consumers can send it home as soon as an hour.”. 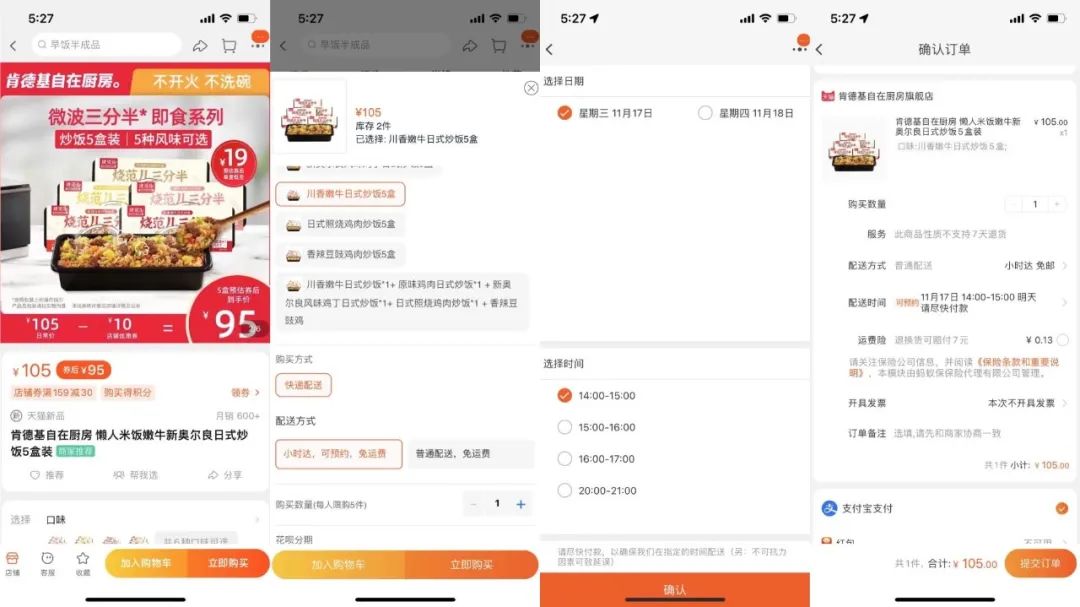 In addition, xiaoshidai noticed that in May this year, KFC also opened a new “KFC K coffee flagship store” on tmall. In the month of opening, it set a new sales record of tmall’s new store and became the head brand of tmall’s new brand creation camp.

K coffee has always been committed to providing consumers with “the experience of drinking a cup of good coffee anytime and anywhere, and constantly breaking the dimensional wall of cross-border cooperation to give consumers more resonance in interests or recognition of values”. The company said that it hopes to build “drinking K coffee” into a symbol of adult light fashion and cool.

At present, the products sold by the store include freeze-dried coffee powder, fresh extract coffee liquid, ear hanging coffee bag, etc., to meet the needs of different coffee lovers. It is reported that this year is k coffee’s first double eleven on tmall. When the coffee liquid rushes into the top 10 of such items, the brand has arranged the new track of ear coffee in advance and continued to expand the items of coffee consumer goods.

It is worth noting that these two new businesses of tmall flagship stores, which joined the “double 11 war” for the first time, not only promoted KFC product Gmv, but also expanded the business of this fast-food chain to more consumption scenarios.

For example, this year, KFC not only sells catering cards, but also starts to sell some home products, which is a great change. KFC’s free kitchen caters to the trend of one person food and home catering, extending from the restaurant consumption scene to the home kitchen scene. KFC K coffee flagship store also helps to bring KFC coffee business from offline catering to retail. “

As for the prepaid voucher business of tmall platform, which still accounts for the “majority” of KFC’s double 11, it uses e-commerce traffic to guide offline stores and further strengthen the consumption scenario of food in the hall / out of KFC stores.

The snack agent noted that this business has also launched more forms of goods this year, including 30 snack free choices (1 out of 5), 10 hamburger three piece single meals, 20 double deals and 12 yuan equivalent coupons. Among them, “30 snacks are optional (1 out of 5)” has become the hot money this year – it is revealed that KFC and Weiya started the pre-sale of tmall on October 20, and the single chain output of this card and voucher product is nearly 40 million Gmv.

KFC’s self broadcast on tmall platform on double 11 this year also brought a lot of Gmv growth. Official data show that in 2021, KFC’s self broadcast Gmv increased by 18% year-on-year, and the number of new fans increased by 37% year-on-year. During the whole activity period, the single product sales of “finger sucking original chicken” reached 2 million yuan, ranking first in the cumulative transaction list of businesses in the industry.

In order to attract more young consumers, KFC has also made a “big move” on double 11 this year.

For example, bet on E-sports. The 2021 S11 League finals, which was held in November 6th this year, is sure to be remembered. The winning of the Chinese team from the Chinese mainland has led to a huge public opinion fever. The related topics were once contracted to micro-blog hot search and the circle of friends.

In particular, a large number of young people who love E-sports celebrate this carnival. Some even joked that how many people in your circle of friends can congratulate the Chinese E-sports team on winning the championship to test the “young content”. In station B, which has a large number of young users, the live broadcast of the S11 finals attracted 400 million popularity.

In this carnival of young people, KFC has already taken a seat in advance. Xiaoshidai noticed that during the double 11 this year, as the official partner of China in the S11 global finals of the League of heroes, KFC pre sold the S11 gift box on tmall platform in advance, including the group image flash card of its sponsored E-sports team, KFC gift card worth 500 denomination, and surrounding information related to E-sports. 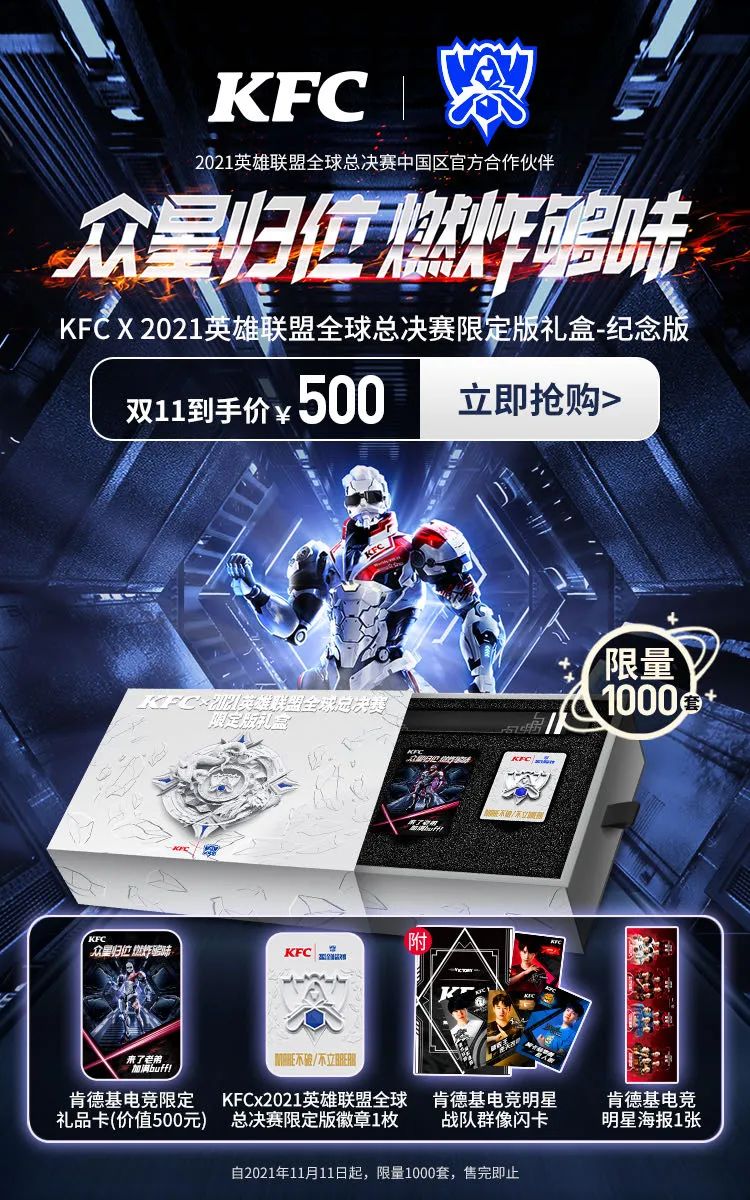 In addition, the above-mentioned K coffee brand-new tmall flagship store also launched the “KFC x 2021 hero League global finals limited edition coffee gift box” to accompany hundreds of millions of young people who pay attention to E-sports to “stay up late to watch the game and raise their glasses to love”. Statistics show that since 2018, KFC has become the official partner of hero alliance in China for four consecutive years.

“This year’s double 11, we arranged relevant products for the e-sports crowd in advance, including the e-sports gift card and coffee gift box of S11, because we judged that the Chinese team in this year’s S11 E-sports competition is likely to win the championship. From the results, this wave has really brought the flow of our whole e-commerce business.” the relevant person in charge of KFC told the snack generation. 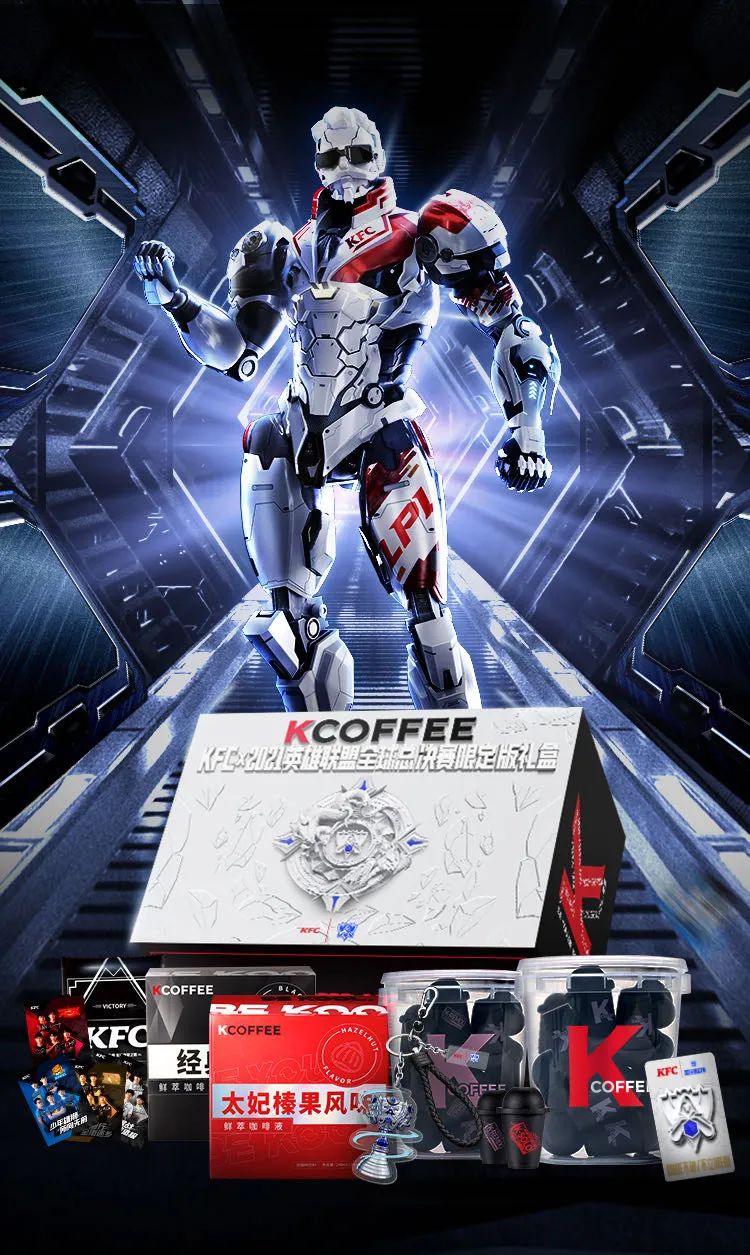 In order to effectively shorten the distance with young groups, KFC also tried to “airborne campus” in a special form for the first time during the double 11 this year.

Xiaoshidai noticed that around this year’s double 11 theme “Happy Planet fried chicken Festival”, KFC, together with tmall campus and members of the three person basketball national team, met Hangzhou Normal University for a cross-border game integrating sports, so that students “enjoy the joy of a basket of fried chicken”. In addition to offline activities, online KFC also carries out student exclusive preferential activities with tmall campus. 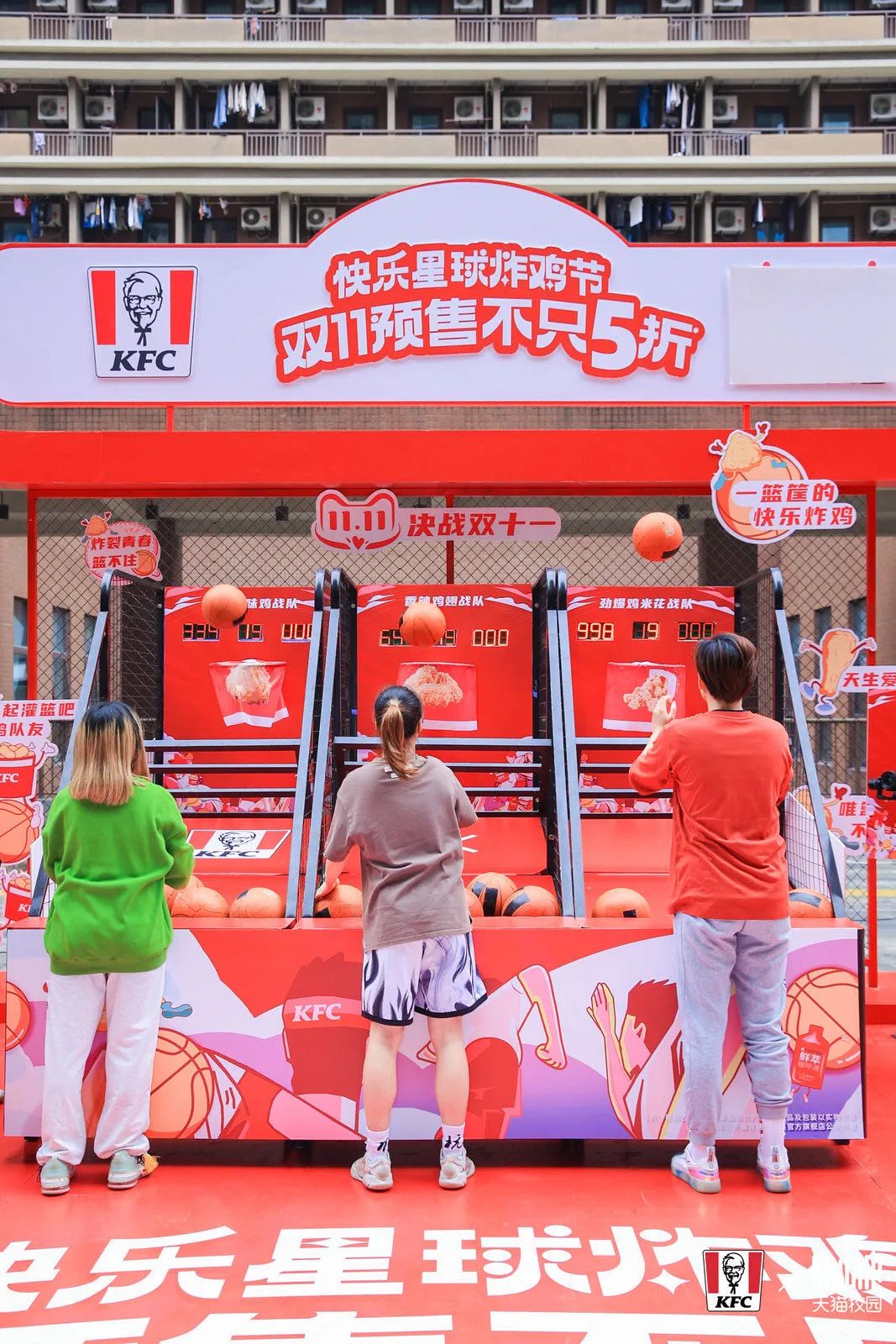 It can be seen that after six years of “double 11 war”, KFC not only did not show the fatigue of growth, but “became braver and braver” to some extent, leading the innovation of e-commerce play in the industry. For a large-scale catering giant, this is not easy.

“Where consumers gather, KFC’s e-commerce services extend to. Looking for new positions for effective communication with consumers, continuous innovation and development, and bringing cost-effective products and new experiences to consumers is one of the important ways for us to seek increment.” the relevant person in charge of KFC told the snack generation that in the future, We will continue to expand scenarios, channels and consumer needs in KFC e-commerce business, shoulder more social responsibilities and strive to provide consumers with better products and services.