The London based FMCG giant announced that it had reached an agreement today to sell its global tea business to CVC Capital Partners Fund VIII in a cash free and debt-free manner at a price of 4.5 billion euros (about 32.7 billion yuan). It is worth noting that this business now has a new name – ekaterra.

This means that many tea brands, including China Lipton business, will be completely stripped from Unilever and transferred to CVC, a private placement company. This also means that Unilever will bid farewell to the title of “the world’s largest tea company”.

Let’s take a look at the latest transaction details. 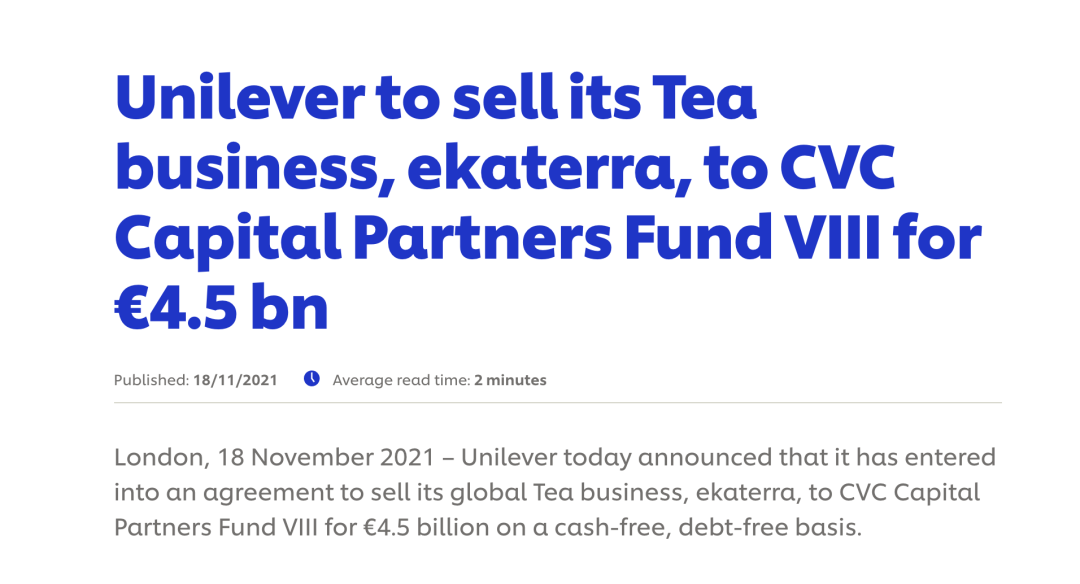 “Everything is going well”

Unilever said in a briefing today that ekaterra is “the world’s leading tea business”, with 34 brands, including Lipton, PG tip, pukka, T2 and Tazo. The revenue of relevant businesses in 2020 is about 2 billion euros (equivalent to about 14.5 billion yuan). The business has 11 production bases on four continents.

Alan jope, chief executive of Unilever, said that the evolution of the portfolio to high growth is an important part of Unilever’s growth strategy. The decision to sell ekaterra shows that Unilever has made new progress in realizing the plan. 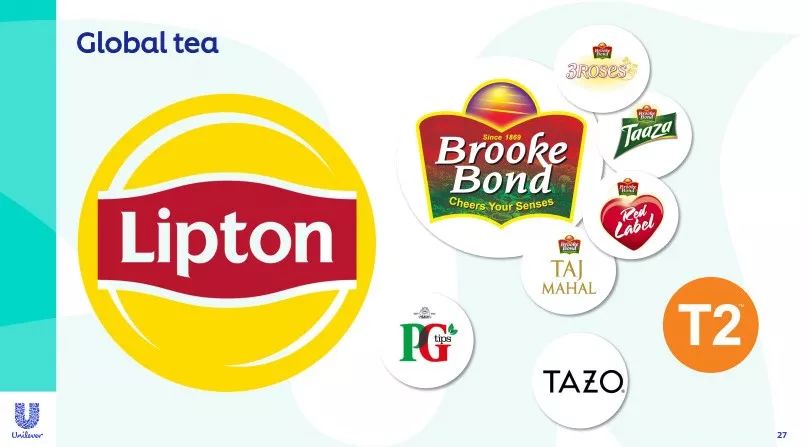 “We are proud of the position of the tea business in the company’s history,” he said, looking forward to seeing ekaterra with a strong brand and global footprint flourish under the leadership of CVC. He also thanked the employees of the tea business and wished them all the best in the future.

PEV Hooper, the managing partner of CVC, said that ekaterra is a “great business”, which is based on “a strong foundation of leading brands”. He also described its tea market as attractive and in a competitive position, which can accelerate growth in the future. He looked forward to cooperating with the team and giving full play to its potential.

Statistics show that CVC is a private equity and investment consulting company with 25 offices in Europe, Asia and the United States, managing about $125 billion in assets.

It is reported that after ekaterra “flew alone” from Unilever, John Davison continued to serve as its CEO (appointed in April this year). He said today that ekaterra is a business with positive development momentum and has “an exciting future under CVC. We look forward to entering a new stage in its journey as the world’s leading tea business.” 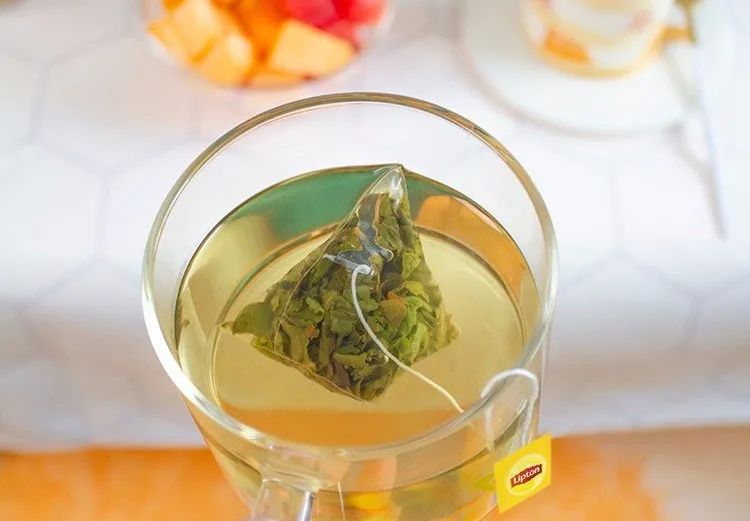 The completion of this transaction still needs some approval and is expected to be completed in the second half of 2022. The transaction scope does not include Unilever’s tea business in India, Nepal and Indonesia, as well as Unilever’s interest in PepsiCo Lipton instant tea joint venture and related distribution business.

According to Euromonitor information consulting, in 2018, Unilever was far ahead of the global tea companies with a share of 10.6%, and its share even exceeded the total share of the second to fifth companies – Tata Group in India (2.3%), followed by United Foods (2.3%) with Twinings and Yunnan Dayi Tea Group in China (1.7%) and teekanne, a German company selling vanilla tea brands such as Pompadour (1.7%).

Hanneke Faber, President of Unilever global food and beverage, also pointed out at the 2019 general meeting of the company that in all the markets the company entered, its tea business accounted for more than 20% of the market share in terms of sales. 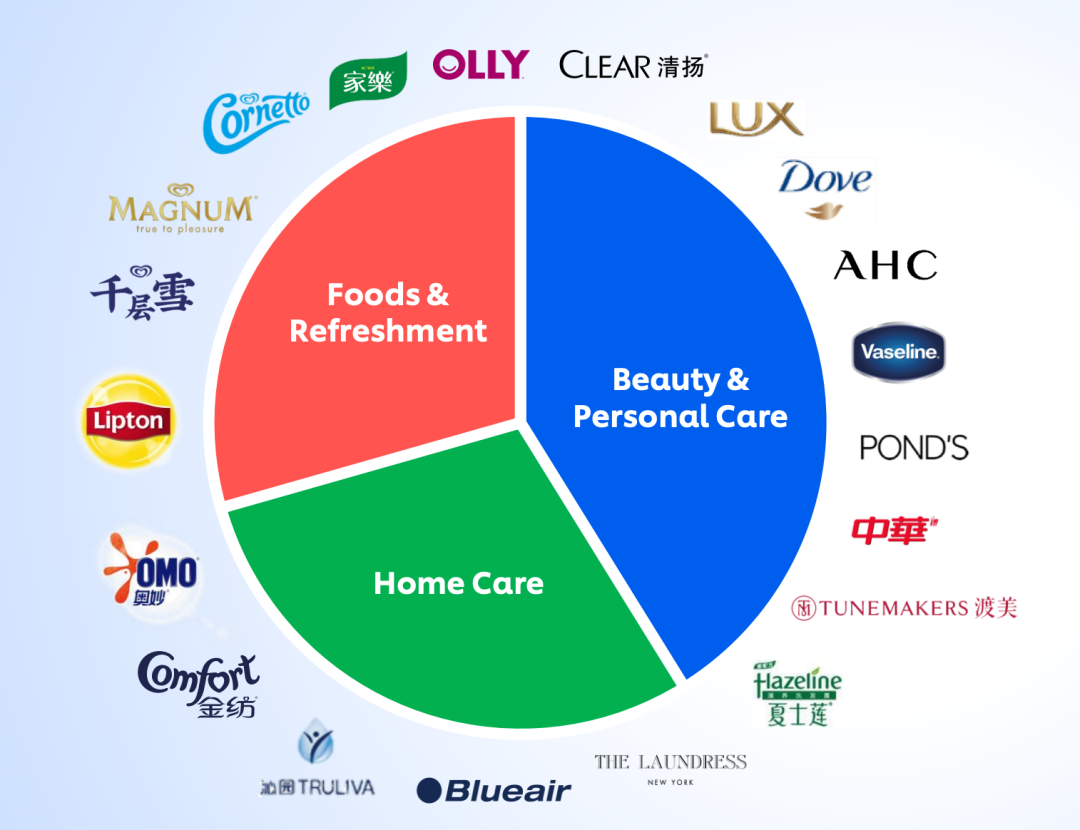 Xiaoshidai once introduced that in order to cooperate with the sales process, Unilever’s tea business in China has already launched the “independence” plan.

In June this year, Unilever disclosed to the snack generation that the independent work of tea business in China will be completed in the second half of the year. “John Davison will lead the tea company to start a new journey. We will continue to adhere to the brand mission and seek the rapid growth of global business.” Unilever told the snack generation at that time.

Statistics show that Unilever’s tea business has a history of more than 150 years, which can be traced back to Brooke bond Tea Co. (1869), a tea company established in the UK, and Thomas J. Lipton Co. (1890), who later began to transport tea to the United States.

“For China, we have further improved the team organizational structure and have a larger and better operation team. The new team has taken over various businesses in the past quarter,” Unilever said earlier.

Today, the snack generation landed on Unilever China’s official website and found that Lipton was still displayed on the official website. The company said that “the Centennial tea making process has been popular in many countries”. 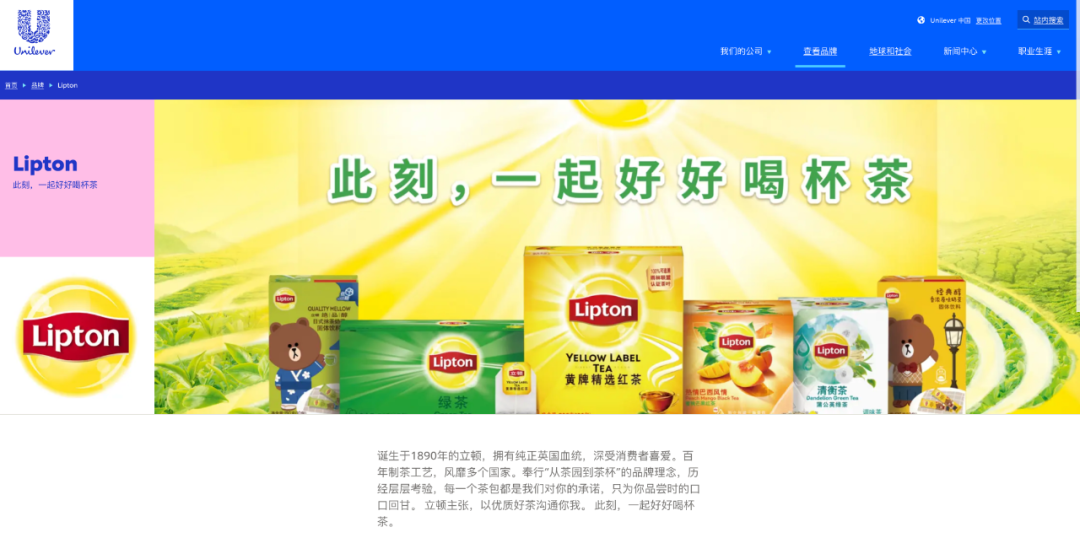 In fact, unlike Unilever, which needs to solve the problem of growth slowdown at the global level, the tea business is still in a stage of continuous development in the Chinese market. Looking at the performance of various channels in the first half of this year, the business has achieved double-digit growth in China.

Lipton has maintained double-digit growth in the Chinese market in recent years and has been firmly in the “top position” in the Chinese tea bag market all year round. According to Nielsen data, Lipton accounted for more than 70% of the tea bag Market of non herbal tea in offline channels in 2019.

At present, Lipton operates more than 200 products in the Chinese market, covering tea bags, tea powder, canned loose tea and other categories, and sells about 2 billion cups of tea every year. In addition to the retail C-end business, Lipton also operates a large-scale catering b-end business in China, covering tens of thousands of catering stores nationwide.

Xiaoshidai noted that although it has entered the sales stage, there are still new investments in the tea business in China. In September this year, Unilever, Lipton tea and other projects also signed contracts with Huangshan City to invest locally. However, with a large number of local tea bag start-ups pouring into the track with innovative ideas, it remains to be seen whether Lipton can still maintain its advantage in the increasingly fierce competition. Bag tea, also known as “tea bag”, is a tea product that takes black tea, green tea and flower tea as raw materials and forms instant drinking after processing.

After the Chinese business is taken over by CVC, the snack generation will continue to pay close attention to the new development trend of Lipton and other brands. 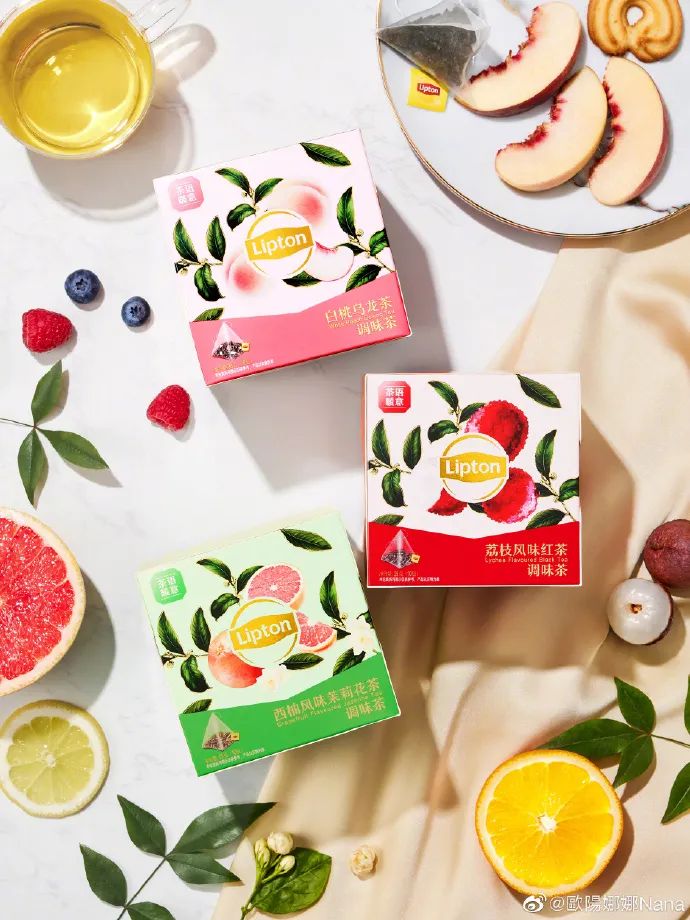 International public opinion has also expressed concern about this sale.

An article on the official website of the Wall Street Journal today pointed out that Unilever has been trying to accelerate growth in recent years by acquiring a series of popular categories of businesses, including vegetarian butcher, a plant-based food brand, graze, a manufacturer of healthy snacks, and a series of high-end skin care and vitamin brands.

Meanwhile, Unilever hopes to sell the slower growing part of its portfolio, such as selling the troubled margarine and spread business to KKR for about $8 billion in 2018.

Unilever is currently the world’s largest tea manufacturer. However, in January 2020, the company said that consumers in developed markets such as the United States and Europe increasingly prefer coffee and other drinks rather than black tea. “The sale is the latest move by the consumer goods giant to abandon some of its slower growing businesses,” the Wall Street Journal said. 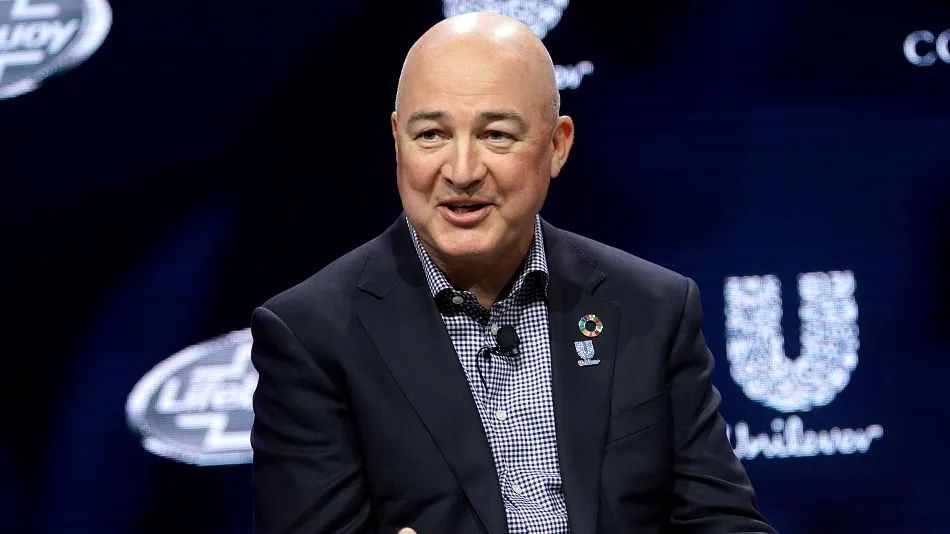 Reuters pointed out today that the sale has freed Unilever from the business that has dragged down profits for many years because of the weakening demand for black tea and the change in consumers’ tastes.

“Qiao’anlu has been under pressure to reverse Unilever because its share price is weak and it is difficult to compete in the face of high inflation costs, especially in emerging markets, which is its largest source of revenue.” Reuters said today that qiao’anlu’s plan is to focus on faster growing areas such as plant-based food, nutrition and high-quality beauty to promote sales growth.

The company reported better than expected quarterly organic sales last month, but warned that inflationary pressures would only become greater in 2022.

“The sale of the tea business called ekaterra marks a much-needed victory for Joan Road,” commented Bloomberg today, who has been seeking to adjust the company’s portfolio to keep up with changing consumer tastes.   Bloomberg quoted people familiar with the matter as saying that the company abandoned its plan to sell its beauty product portfolio for $1 billion earlier this year because it failed to attract enough demand from potential buyers.

In July 2020, Unilever’s tea business evaluation results were “released” and announced that it would divest most of its tea business. According to the financial report, the revenue of this tea business in 2019 was 2 billion euros, accounting for about 2 / 3 of the company’s tea business revenue. Among them, China’s tea business is also within the scope of stripping, but Lipton instant tea, which cooperates with PepsiCo, is not affected. 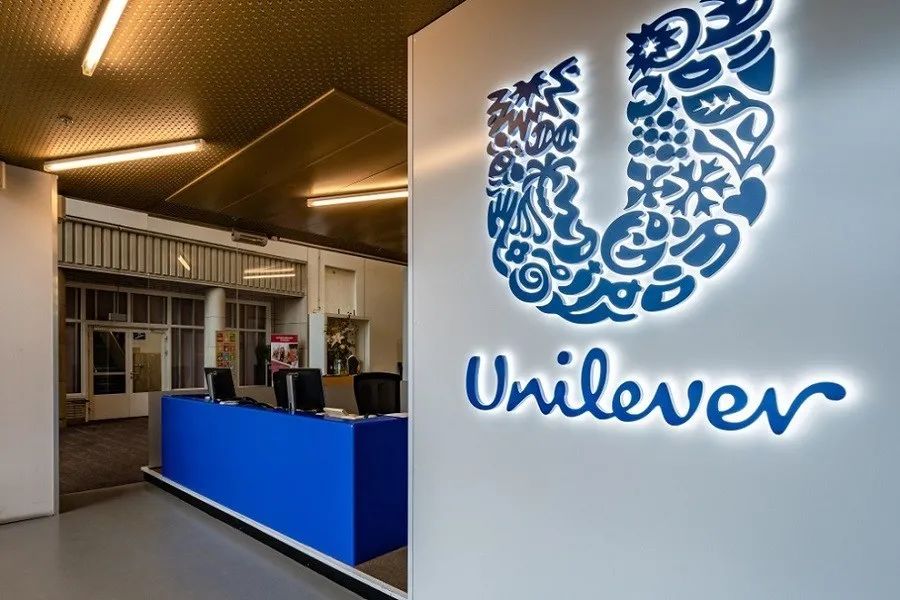