Luhua denied selling wine across borders, saying it was only for internal sales

Shandong Lu Hua recently launched two Maotai Baijiu liquor in its member shopping mall, so the industry therefore speculated that Lu Hua would distribute wine industry and cross border “sell wine”. On December 2, the relevant person in charge of the Publicity Department of Luhua group denied this speculation. The official said that Maotai flavor liquor is only used for internal sales of the group. The company mainly focuses on the development of its main business and will not layout the liquor industry. (Beijing News)

According to the official website of Shanghai Municipal Bureau of supervision, the advertisement for non health food honey fudge released by Ruiqi olan (Shanghai) Food Technology Co., Ltd. claimed to have health care effect and violated the regulations on the implementation of the food safety law of the people’s Republic of China. It was fined 10000 yuan by Shanghai Putuo District market supervision and administration and ordered to stop publishing the advertisement. The date of punishment decision is November 24 (Shanghai Municipal Bureau of supervision)

Dali food announced on December 2 that it would adopt the share award plan and purchase shares according to the share award plan. The board also resolved to provide the trustee with funds from time to time, but in any case not exceeding HK $1 billion in total, to purchase existing shares at an appropriate time and hold them for future grant of shares under the scheme. （Wind）

Sipping sipping will return to the mass consumption line

On November 30, he Guangqi, founder and chairman of Xiabu group, disclosed the latest strategic actions of the group at a financial summit, involving Xiabu’s return to the mass consumption line, and plans to launch Xiabu x, a mid-range hot-pot/" 22375 rel="nofollow" target="_self">hot pot brand, next year. At present, there are two brands of Xiabu group, Xiabu Xiabu and the “gather together” launched in 2016. According to he Guangqi, Xiabu x is positioned at about 90 yuan per capita, separated from the positioning area of about 60 yuan per capita and about 120 yuan. (interface News)

On November 30, the emperor’s casserole restaurant “Emperor Huang Youliao bureau” opened. In addition to the main cured casserole rice, it also provides a series of dishes such as Cantonese stewed brine and Western meat. At present, the store package price ranges from 38-59 yuan. According to the plan, the Emperor Group will open more stores with information bureau (but did not disclose the specific number). At the same time, it also intends to transform and upgrade the existing 12 retail stores of the group into catering stores. (interface News)

Recently, Mingsheng company announced the latest results. The MSCI ESG (environmental, social and corporate governance) rating of Mengniu Group was adjusted to “BBB” from “BB” last year. This year, Mengniu’s MSCI rating was raised to BBB, and Hang Seng’s ESG rating was raised to a +, both of which achieved the highest ESG rating in China’s food industry (investment times)

Jab announced on December 2 local time that the company signed a three-year total return swap agreement with BNP Paribas, which can purchase up to 6.5 million shares of Krispy Kreme, an American doughnut chain brand. Jab said it believed that Krispy Kreme could create value in the long term. Jab currently owns about 44.77% of the outstanding shares of Krispy Kreme and intends to act as a major shareholder in the coming years. (issued by the company)

American investment management company Vaneck will launch Vaneck future of food ETF (Vaneck future of food ETF) on December 2 local time, with the code of “yumy”. According to the company, the ETF adopts bottom-up basic research for the first time, and will focus on companies engaged in agricultural and food technology and innovation. It is expected to be listed on Arca of New York Stock Exchange (Zhitong finance and Economics)

On December 2, Suntory group announced that it had successfully manufactured PET bottles made of 100% plant materials. Suntory’s goal is to stop using PET plastic bottles made of petroleum extracts worldwide and achieve 100% recycling or use plant-based PET bottles by 2030. (issued by the company)

Kellogg will cooperate with Tesco, a British supermarket, to try paper packaging in some stores from January 2022. At present, the outer packaging box of cereals has been completely recyclable. After using the new inner packaging bag, the whole packaging of Kellogg’s cereals will be completely made of paper. （foodbev）

On December 2, the import and export food safety bureau of the General Administration of Customs updated the registration list of a number of overseas manufacturers of imported infant formula dairy products, including the Netherlands, Denmark, Poland, South Korea, New Zealand and Australia. Among them, Nutricia Cuijk B.V., a new enterprise in the Netherlands. (General Administration of Customs)

On the morning of December 1, the expert consultation and demonstration meeting on the construction scheme of the national dairy technology innovation center was held. Bao Xianhua, vice chairman of Inner Mongolia Autonomous Region, Pan Gang, chairman of Yili Group, and others attended the Inner Mongolia branch meeting. The construction of the national dairy technology innovation center is of great practical significance to further promote the action of “Prospering Mongolia through science and technology”, support the high-quality development of dairy industry, create an innovative dairy ecology and enhance the national industrial competitiveness. (Science and Technology Department of Inner Mongolia Autonomous Region) 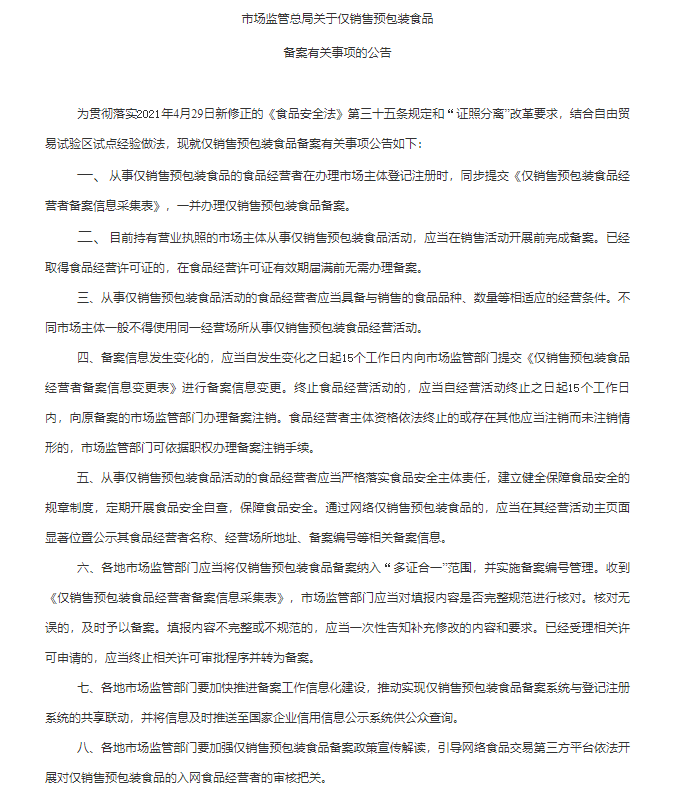 Hungry? Launched an AI dish analysis system “hungry taste” for businesses to help businesses develop new dishes through the platform’s digital technology and market insight. The current beta version has developed 12 new products in cooperation with a number of catering chain brands, and has been internally tested in 41 cities. (Yibang power)

Blockchain will be used to protect food safety

The website of Spanish newspaper abessay recently reported that blockchain technology is becoming a “powerful weapon” to protect food safety. According to the report, “baas” (“blockchain as a service”) is an important blockchain application that provides a “digital footprint” for the supply chain. It reduces the possibility of fraud (data cannot be edited or deleted), optimizes costs and ensures food safety, which is a global scene brought about by the joint efforts of IBM and Wal Mart. Blockchain technology can track the carbon or water footprint of products or batches, ensure food quality and safety, or become an excellent data exchange connection between suppliers and customers, and strengthen activities and trust between both parties. (reference message)

Today, Didi travel said that after careful research, the company will immediately start delisting on the New York Stock Exchange and start preparations for listing in Hong Kong. (surging)

On December 2, grab, known as “didi + meituan in Southeast Asia”, officially landed in the US stock market. The company was publicly listed in the United States through merger with Altimeter growth Corp., a special purpose acquisition company (SPAC). Grab opened up more than 18%, then opened high and went low, and finally closed down more than 20%. (gelonghui)