With the rising cost, Fonterra, a New Zealand dairy giant, faces great challenges at the beginning of fiscal year 2022. Today, the dairy cooperative released the results of the first quarter of fiscal year 2022, improved the forecast range of the raw milk purchase price range in 2021 / 22, and revised its revenue guidelines.

According to the financial report read by snack generation, Fonterra group achieved an EBIT of NZ $190 million (about RMB 820 million) in the three months ended October 31 this year. “This was achieved when the input cost was significantly higher than that in the same period last year,” the company noted that the price of whole milk powder increased by 30%. 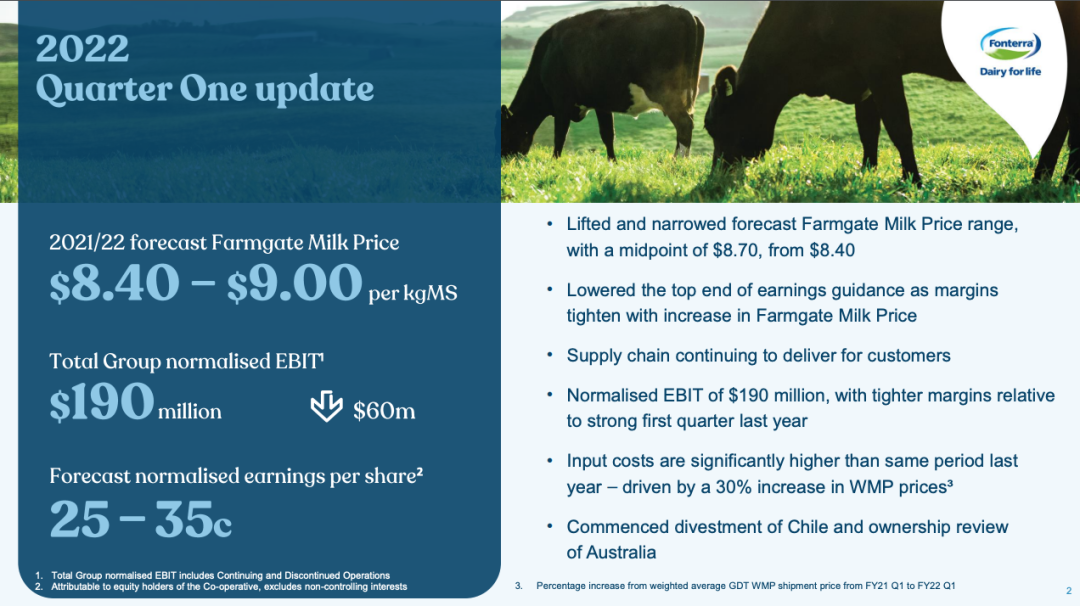 Hurrell pointed out that the sales volume of Fonterra’s catering service business was stable in the first quarter, but the high milk price squeezed the profit space. Tighter profit margins and exchange rate factors also affected its overall consumer goods business. As for the raw material business, he said that the profit margin in Fonterra’s longer-term pricing contracts was returning to a more normal level, which would help to improve the group’s gross profit margin.

“On the whole, I am proud of what we have achieved,” he said. 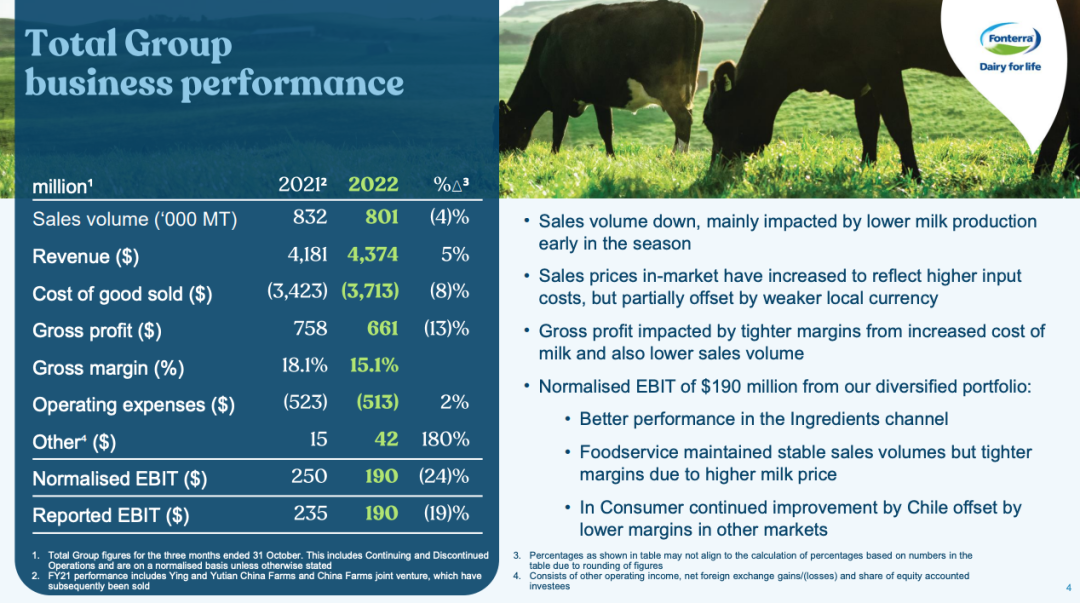 Hurrell said that although the epidemic continues to affect all over the world, Fonterra is trying to serve shareholders and customers such as dairy farmers and provide support to employees.

However, he also pointed out that there are still many worrying problems. For example, virus variants may be more resistant to vaccines; In addition, whether the economy can rebound from the epidemic and maintain a healthy financial situation “is still a problem”. 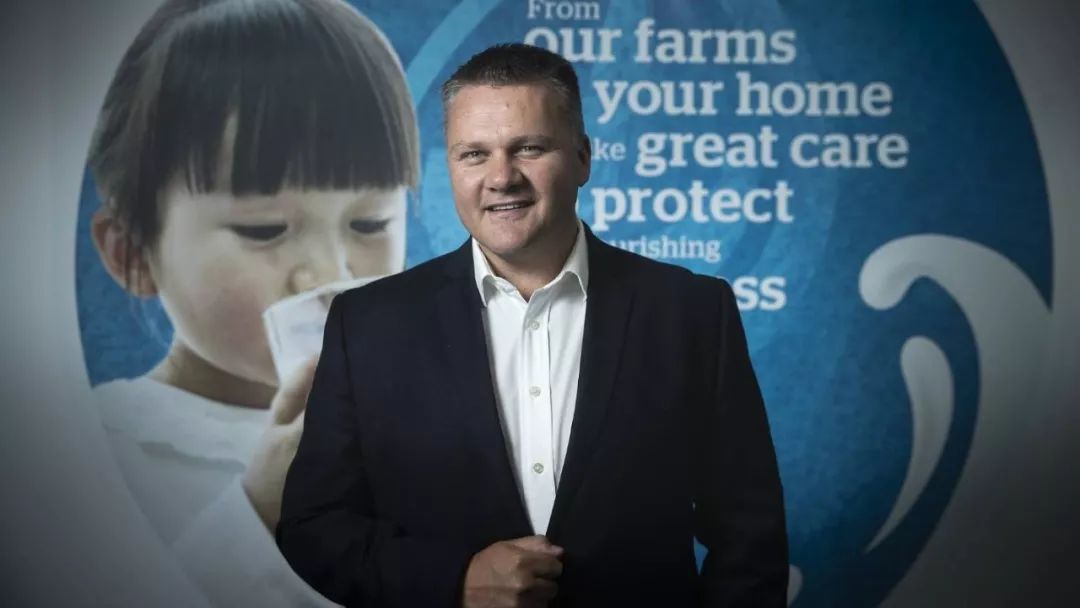 In the Chinese market, Fonterra’s outlook for fiscal year 2022 is cautiously optimistic. “There will be some challenges and optimism in fiscal year 2022.” Zhou Dehan, CEO of Fonterra Greater China, told xiaoshidai in November this year that the challenge comes from the uncertainty of the epidemic on the one hand and the rise in raw material prices on the other.

For whether Fonterra will ease the pressure by raising prices, he once responded to the snack generation that the industry will basically price according to the global dairy trade index, which has shown an upward trend recently. “The price will always follow the market, and we will respond according to the market conditions.”.

According to Fonterra’s latest release today, the purchase price range of raw milk is expected to be NZ $8.4-9 per kilogram of milk solid, higher than the previous NZ $7.9-8.9. The price range has been further improved and narrowed. 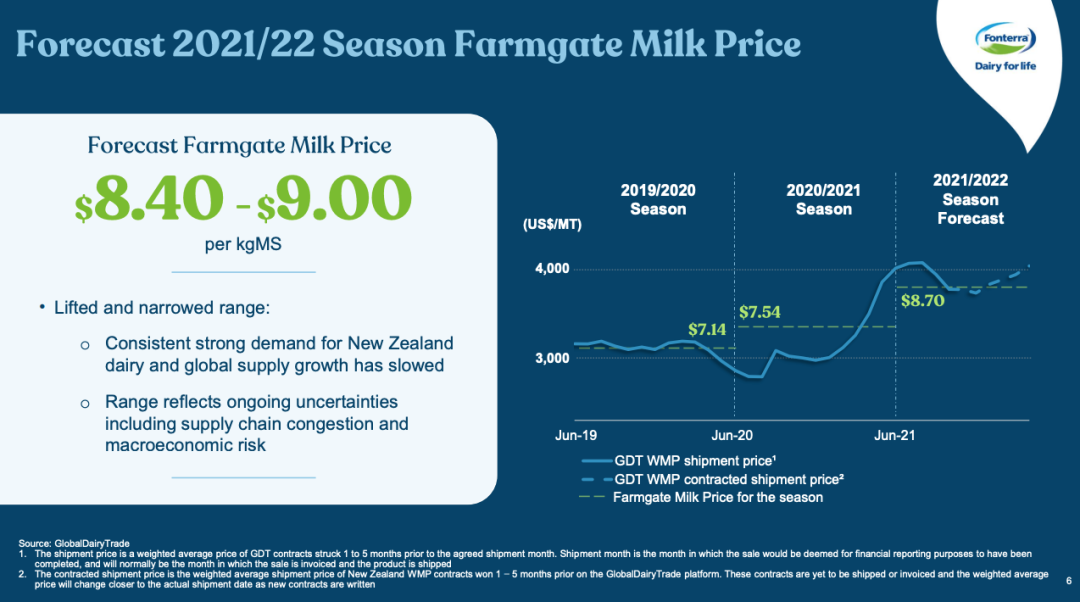 “This raised the middle point of the price paid to dairy farmers to NZ $8.7 per kilogram of milk solids.” the company said that as milk prices rose, it revised its earnings guidelines to 25-35 cents per share, compared with 25-40 cents per share.

Hurrell said today that raising the predicted raw milk purchase price range of 2021 / 22 is “good news” and is expected to contribute more than NZ $13.2 billion to the New Zealand economy.

“This is driven by the continued strong demand for dairy products under the condition of limited global supply,” he said. In the first quarter, there were a series of factors affecting events, including the high price of feed in the United States and the lower than expected supply in Europe. 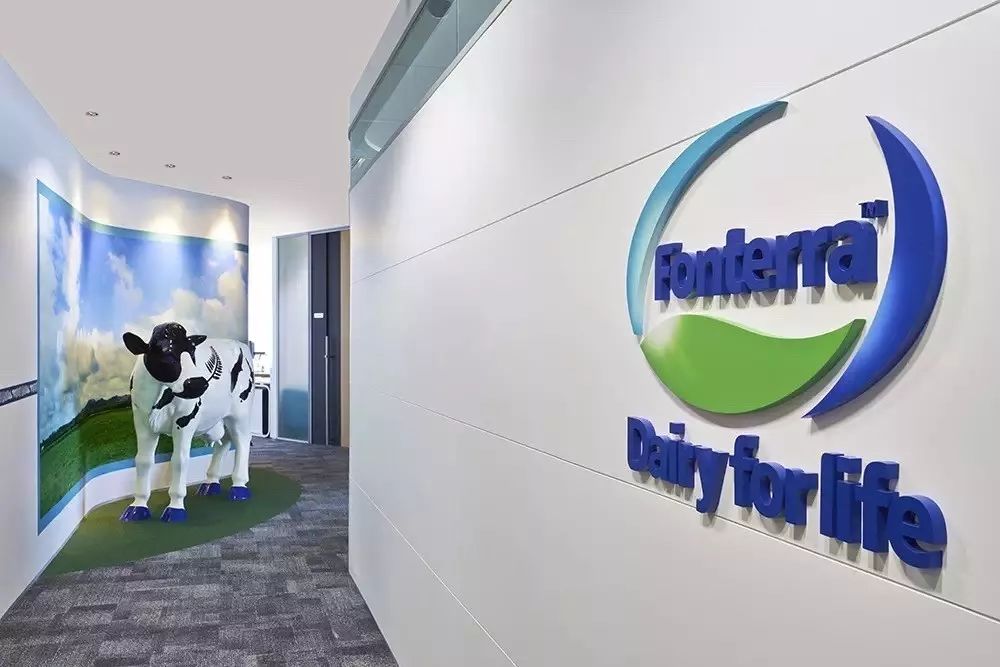 Hurrell said that it is predicted that the milk collection in 2021 / 22 quarter will be 1.525 billion kg of milk solids, which will be less than 1.539 billion kg of milk solids in the previous quarter. “Although we see a slight weakness in demand in the Chinese market, global demand is still strong, and we think it will still be a short to medium-term trend,” he said

However, he also pointed out that raising the forecast range of raw milk purchase price to this level will also put pressure on Fonterra’s profit margin. “That’s why we lowered the upper limit of our income guidance range.”

Today, Fonterra also released the latest progress of the 2030 strategy.

Xiaoshidai introduced that in September this year, Fonterra released its fiscal year 2030 objectives and new long-term strategy for the first time. “We have made three strategic choices to achieve the goal (fy2030) – continue to focus on New Zealand milk, become a leader in sustainable development, and become a leader in dairy innovation and scientific research,” hurrel said earlier.

Today, hurrel expressed confidence in achieving the goal of fiscal year 2030, and there are early signs of progress.

“As we continue to focus on New Zealand milk, we are divesting our business in Chile and reviewing the ownership of our business in Australia. We have appointed consultants to assist in the advancement of these two processes. Depending on the final result, we plan to return approximately NZ $1 billion to our shareholders by fy2024,” hurrel said. 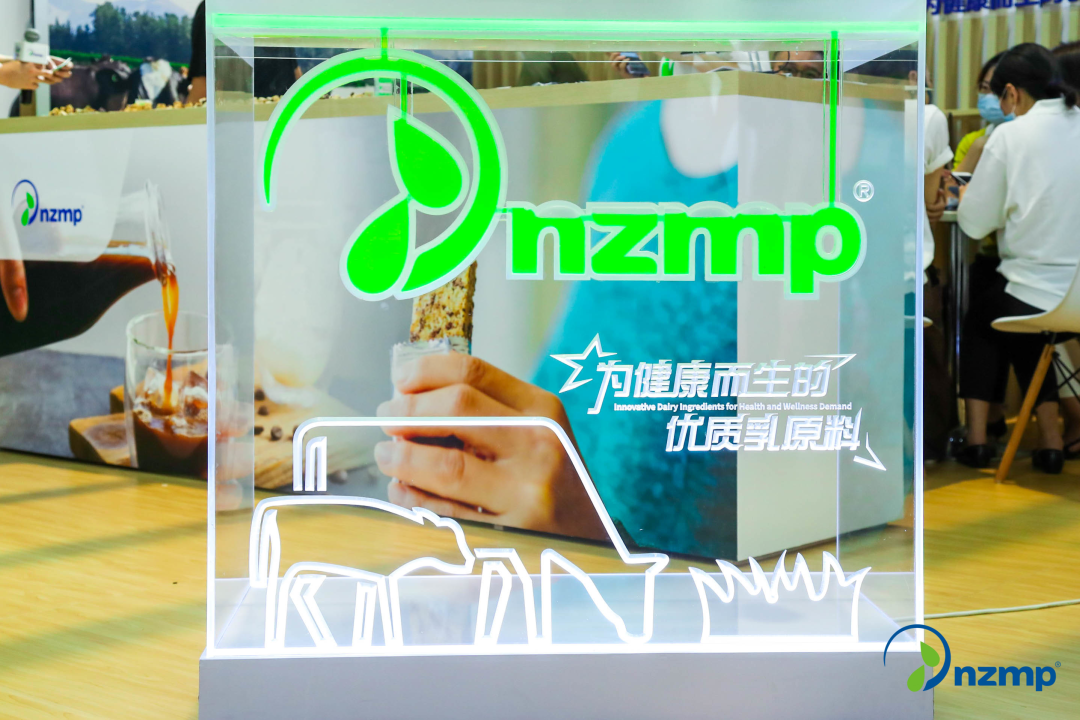 Fonterra also has many new actions in focusing on New Zealand milk.

For example, hurrel mentioned that Fonterra recently launched the mainland cheese Series in Dubai’s largest supermarket chain, which was very popular and “sold out”. “Our local team is now looking to extend the product range to other countries.”

In terms of technological innovation, for example, in November this year, Fonterra reached a cooperation agreement with vitakey, an American biotechnology company, to find ways to use probiotic strains to prolong product freshness and nutrition. Under the pressure of the current epidemic on the global supply chain, the importance of maintaining product nutrition and prolonging product storage life is more prominent.

Pay attention to “snack generation” (wechat: foodinc) “and reply to” Fonterra “to see the wonderful news.