As quick-frozen dumplings, dumplings and other products are well-known Sanquan food for consumers, we are now ready to overweight the breakfast product market.

Recently, the company launched three new products of small steamed buns, starting with authentic flavor and with the improvement of noodle rolling technology, Sanquan food hopes to meet the taste needs of more consumers. In the same period, Liu Tao, a well-known actor of official publicity, became the spokesman of Sanquan food, and there will be a series of new measures in the follow-up.

No matter how busy life is, breakfast should not be dealt with casually. How to bring “formal but effortless” breakfast to consumers is the initial intention of Sanquan food overweight business. 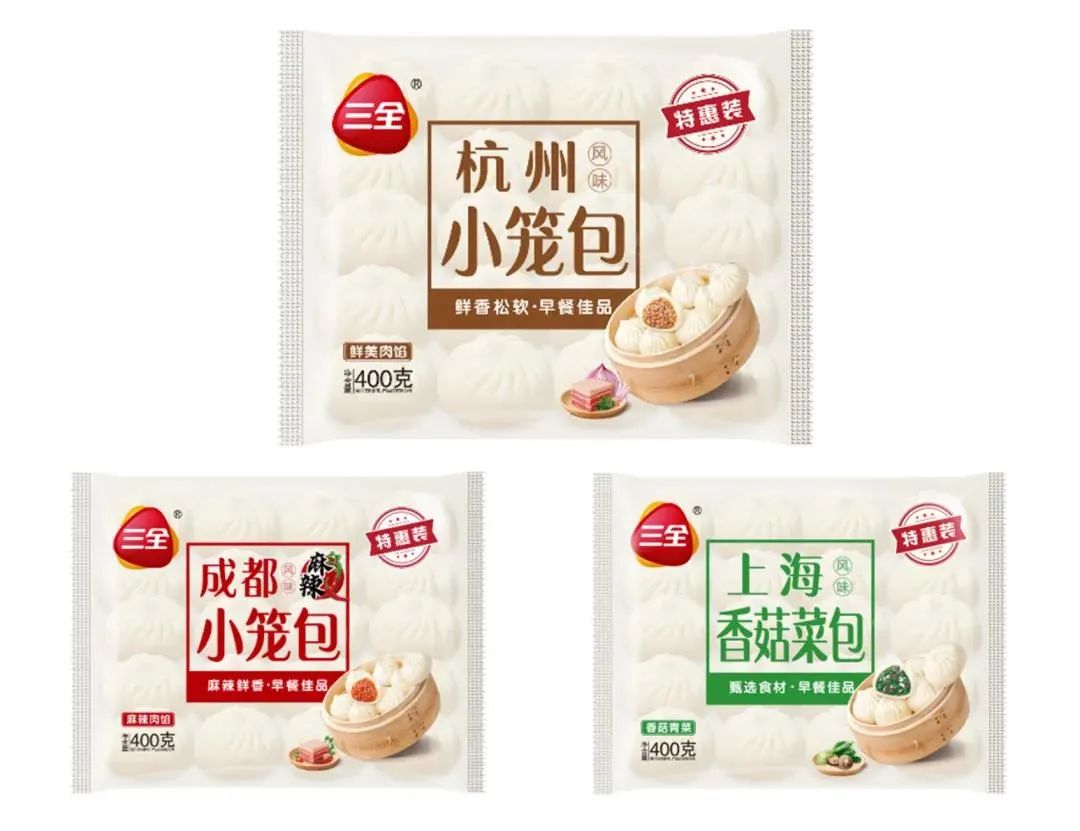 In order to make the taste of xiaolongbao comparable to that of xiaolongbao sold in offline stores, Sanquan food has made a lot of efforts in R & D and design.

In terms of taste selection, Sanquan xiaolongbao takes the authentic flavor as the starting point, trying to restore the traditional formula of the local package, which is considered to be easier to attract Chinese family consumers. 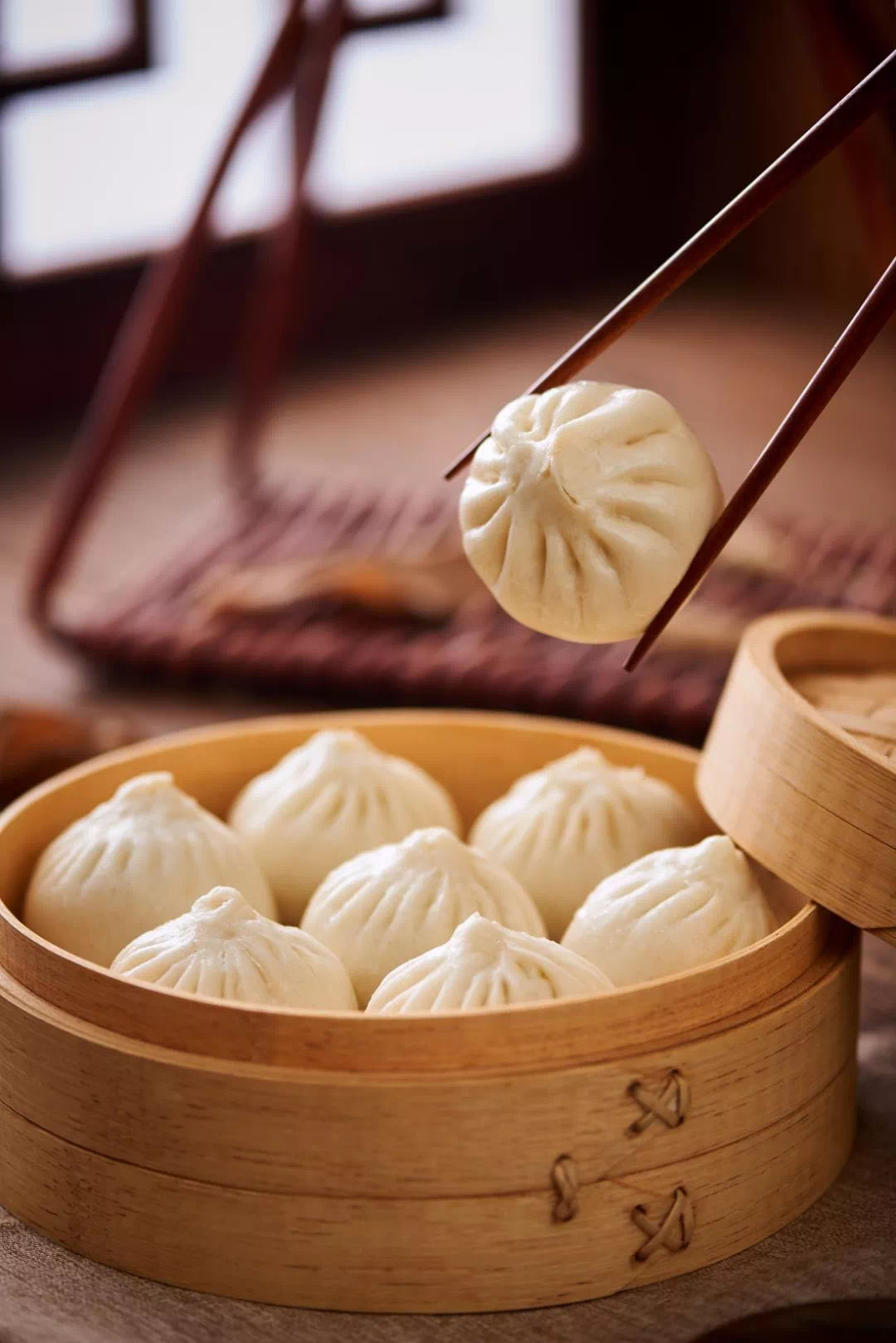 In addition, in terms of specification setting, Sanquan food adopts a large packaging design of 400g to meet the breakfast needs of the family and achieve the goal of “the whole family can eat”.

Sanquan food said that the new products of xiaolongbao will mainly face the distribution channels and hope to cover the markets of non first tier key cities. The target audience groups include housewives (family users) and office workers (individual users) with fast-paced life.

According to public data, the scale of China’s quick-frozen food market has reached 139.3 billion yuan in 2020 and is expected to reach 19.6 billion yuan by 2024. Pasta food is an important branch of quick-frozen food, and most of the varieties in China’s breakfast market are rice noodles. This market capacity gives Sanquan an opportunity. Since joining the breakfast track in 2017, Sanquan food has launched more than 100 Chinese and western breakfast products, including fried dough sticks, pumpkin cakes and croissants. Since then, it has been deeply cultivated in the Chinese breakfast market.

With the acceleration of people’s pace of life, how to eat a comfortable breakfast quickly and painlessly has become a topic that many family “masters” are studying. Sanquan food hopes to help Chinese families solve the breakfast problem more painstakingly, which has also become the main reason for its increasing breakfast market.

The launch of new products such as xiaolongbao is regarded as the practice of Sanquan food to improve brand awareness, which can also expand its sinking market share.

Public data show that in China, 670 million users in the sunken market account for more than half of the market. In the post epidemic era, Sanquan food chooses breakfast 2.0 series products with higher cost performance. Liu Tao, who has a gentle and friendly image, is selected as the representative of Sanquan food. With the help of interactive forms such as short video challenge, it can better get close to the sunken market and home Court audience. In addition, enriching breakfast products is also one of the diversification strategies of Sanquan food products. Diversified products are conducive to breaking through and further consolidating the position of the industry.

In recent years, the company has made many strategic adjustments, positioning itself from tangyuanwang to fast food products, gradually transformed into a table food supplier, and successively added several new products in the field of household quick-frozen food, catering business market and fresh food. For example, in 2020, aiming at the family breakfast scene, the company launched breakfast products such as thin skin pie, animal City cartoon bag, steamed and fried dumplings, potstickers, Shaomai and so on.

In addition, in the traditional category, it also launched a variety of new products such as “black gold series” dumplings with upgraded quality, private kitchen super seafood dumplings, fairy taro dumplings, shrimp wonton and so on.

While upgrading the product structure, Sanquan food also actively accelerated the channel layout and expanded the number of dealers. According to the company’s financial report, Sanquan food had 5622 dealers by the end of 2020, an increase of 1316 compared with the end of 2019. Through the dealer model, Sanquan food has built a sales channel and network covering all provinces, cities and counties in China to ensure that the products can be quickly promoted to the end markets all over the country. At the same time, it also improves the brand awareness of Sanquan food and plays the role of new product display and consumer education.

Division of labor and cooperation is a new function of the quick-frozen industry. In order to better cooperate with dealers, Sanquan food is constantly improving its own strength.

In terms of production capacity layout, since the listing of Sanquan food, on the one hand, it has invested in the construction of its headquarters Zhengzhou comprehensive base, on the other hand, it has stepped up the layout of production places outside Zhengzhou, and successively distributed production capacity in Foshan in South China, Chengdu in Southwest China, Taicang in East China and Tianjin in North China. At present, it has formed five major production places in China. In terms of supply chain layout, the company has created a new food safety supply chain from farmland to dining table, which fully ensures the quality and safety of products in the whole supply chain from raw material planting and breeding, production and processing, storage, transportation to terminal sales; In terms of logistics, the company has also built a perfect “full cold chain” system covering the whole country to ensure the freshness and safety of products.

Since the launch of China’s first quick-frozen dumpling and the first quick-frozen zongzi, Sanquan food has always adhered to the mission of “promoting Chinese food, aspiring to create an industrial pioneer and achieve a century old foundation” and the vision of “leader of table food supplier”. The essence of being a table food supplier is to industrialize the table food. In an interview with the media, Chen Xi, President of Sanquan food, said that on the whole, China’s “food” industrialization still lags behind, and the lag is the value depression. The industrialization of Chinese food is bound to set off a huge wave of the times.

“Sanquan has basically completed the industrialization transformation process of rice noodle products such as dumplings and dumplings, but what we do is the staple food. It is the products that consumers can see when they go to the restaurant and turn the menu to the last few pages, and there are still a large number of categories in front that have not completed industrialization,” Chen Xi said.

If these categories and products can appear on consumers’ tables in diversified forms in the future, it will further promote the industrialization of traditional gourmet food. According to the prediction of Guohai Securities Research Institute, according to the compound growth rate of 20% per year, the quick-frozen food market is expected to grow into a trillion yuan market in the next 6-7 years, and is now in the stage of scattered brands and product-oriented.

As a leading enterprise in the industry, Sanquan food will fully share the market dividend and continuously expand the product scene. Giving play to the advantages of production capacity and supply chain, and improving channel capacity will show more possibilities in promoting the industrialization of traditional gourmet food.