The centre for food safety of the Hong Kong food and Environmental Hygiene Department received a notification from the European Commission’s food and feed rapid warning system today that the stabilizers used in six Godiva ice creams were found to contain ethylene oxide, a pesticide banned by the European Union. According to the information of the early warning system, the affected products were imported into Hong Kong and the importer was Godiva chocolate (Asia) Limited. The importer has removed the affected batches of products from the shelves and stopped selling, and started recycling. (Hong Kong food and Environmental Hygiene Department) 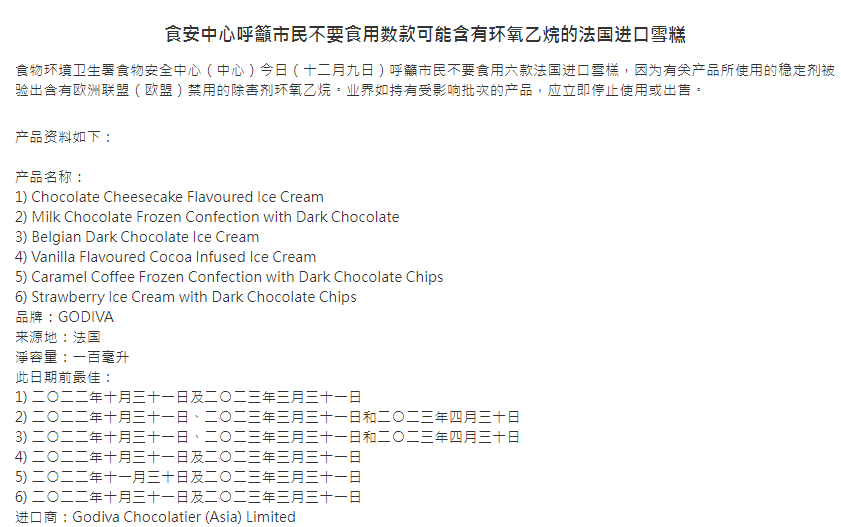 This morning, meituan takeout rider app was unable to receive orders due to technical failure. Meituan takeout posted on the official microblog that the failure had been fully repaired at 10:46 and apologized to the affected users, businesses and riders. Affected users can choose self-service refund and get a 10 yuan non threshold red envelope. The normal meal loss suffered by the merchant due to system failure will be borne by meituan takeout. The rider will also be exempted from liability for all assessment problems such as overtime delivery and poor evaluation caused by failure. At the same time, the rider’s income today will be compensated through activities such as red envelope rain. (issued by the company)

Meituan takeout recently launched the “peace of mind guard plan”, which will cooperate with businesses across the country to increase the popularity of “food security seal”. The relevant person in charge of meituan takeout said that 100 million “food safety seals” will be put into pilot cities in Anhui, Zhejiang and Guangdong in the near future. The food safety seal is made of one-time special materials and pasted by the merchant when the food is packaged. If it is torn, it will leave a trace of permanent damage. Consumers can use this to confirm whether the food is intact in the distribution process, so as to eliminate the food pollution caused by unexpected factors. (interface News)

New hope Dairy Co., Ltd. announced today that its wholly-owned subsidiary GGG Holdings Limited signed a loan contract with Rabobank Hong Kong Branch on October 26, 2021 to borrow a one-year commercial loan of US $52 million. The purpose of the loan is to purchase 16805598 ordinary shares of austasia Investment Holdings PTE. Ltd. As the guarantor, the company provided joint and several liability guarantee for GGG’s loan. At the same time, GGG also pledged and guaranteed the loan with all its shares in Australia Asia investment. (company announcement)

Wu Chengyun, deputy general manager of Yantang dairy, plans to reduce his holdings of no more than 67400 shares

Yantang dairy announced that the company received the notification letter of share reduction plan issued by Wu Chengyun, deputy general manager, on December 8. The planned reduction of shares does not exceed 67400 shares, accounting for 0.0428% of the total share capital of the company. (company announcement)

Today, Rio’s parent company, Shanghai Bairun Investment Holding Group Co., Ltd., announced that based on various cost increases, the company decided to adjust the ex factory prices of various series of products. The price increases of main products ranged from 4% to 10%, and the new prices were implemented according to the product price adjustment notice since December 25, 2021. (company announcement)

Weixiaofan, a new digital fast food brand, has recently completed a round of financing of nearly 100 million yuan. This round of financing is exclusively invested by Tiantu investment, and the financing funds will be mainly used for market development. Weixiaofan, founded in March 2019 and operated by Shenzhen Weishi Intelligent Health Management Co., Ltd., is the pioneer of the first digital fast food in China. The brand has built a central kitchen covering the whole chain of end-to-end dish production functions such as R & D, processing, cooking, packaging, inspection and storage. At present, weixiaofan has 250000 registered users, reaching 15000 daily lives, and there are nearly 40 “CBD smart stations”. （36Kr）

On December 8, deliveroo, a Hong Kong takeout platform, announced the opening of household kitchens in Tseung Kwan O, Hong Kong. Xu Zhixian, general manager of household delivery in Hong Kong, said he hoped to help restaurant partners provide solutions through household kitchens, so as to improve turnover and expand business; The company will continue to invest in this business in the future. (Ming Pao)

The world brand laboratory released the world’s top 500 brands in 2021, and 34 brands in the food and beverage industry were listed!

COFCO announced on December 6 that on December 1, the group’s China tea signed a tripartite strategic cooperation agreement on industrial assistance with the planning and Finance Department of the Ministry of civil affairs and the people’s Government of Suichuan County, Jiangxi Province. Through government enterprise cooperation, it continued to increase guidance and support for the gougunao tea industry in Suichuan County, so as to drive the development of the tea industry in Suichuan County, We will help Suichuan County effectively link its poverty alleviation achievements with rural revitalization. (issued by the company)

Recently, the 2021 China new growth list was announced. Nestle was selected into the “2021 China new growth · ESG innovation practice list” by virtue of its excellent practice throughout the whole value chain in the process of low-carbon transformation. Nestle promises to reduce greenhouse gas emissions by 20% by 2025, use 100% renewable electricity, realize 100% packaging recyclable or reusable, and reduce the use of primary plastics by one third in the same period. (issued by the company)

Since early October, about 1400 workers at Kellogg’s four grain food factories in the United States have been on strike to protest what they call unfair wages and benefits. Kellogg announced on December 8 that it would permanently dismiss about 1400 striking workers, who had previously rejected the tentative agreement of “raising salary by 3% and retaining medical benefits”. Kellogg said that the company did not arrange further negotiations and had no plans to meet with the trade union. (Sina)

Beyond meat announced on December 8 that two industry veterans of Tyson Foods were appointed to join the senior management team to prepare for a high-profile entry into the fast food industry next year. Doug Ramsey, who is in charge of poultry and McDonald’s business at Tyson food, will take over from Sanjay Shah as the chief operating officer of beyond meat; Bernie Adcock, who is responsible for Tyson’s operation and supply chain management, will serve as the newly established position of chief Supply Chain Officer (CSCO) of beyond meat, and his direct superior is Ramsey. (issued by the company)

Retail revenue of impossible foods increased by 85% in the quarter

Plant meat company imposible foods released some key financial data on February 8. The company’s quarterly retail revenue increased by 85% year-on-year. The company’s retail business has increased significantly to more than 20000 grocery stores and supermarkets. In the field of food services, the number of restaurants is about 40000. Dennis Woodside, President of impossible foods, said that the company’s household penetration has tripled in one year, and the sales volume and sales speed of retail stores have increased significantly. （Market Watch）

Kraft Heinz will merge its U.S. and Canadian operations to create North America

On December 8, kraft Heinz said it would merge its operations in the United States and Canada to create North America, which is expected to take effect in the second quarter of 2022. The move aims to promote the company’s long-term sustainable growth plan. The company announced that Carlos Abrams Rivera, the current president of the United States, will be responsible for the business in North America; Bruno Keller, the current president of Canada, will be responsible for the company’s Latin America business; Robert Scott, currently vice president of global product development, will serve as president of North American R & D. （dairyfoods）

Redefine meat, an Israeli start-up, uses 3D printing and artificial intelligence to manufacture plant-based steak. The raw materials include soybean, pea protein, beetroot, chickpea, nutritional yeast and coconut fat. The company uses artificial intelligence technology to capture the feeling of muscle fibers of animal meat, as well as the juicy and solid texture, so that the 3D printed steak made by the company looks, tastes and feels like real beef or mutton. The 3D printed plant-based steak is now sold in restaurants for $25 to $40, which is similar to traditional steak

Heineken, a Dutch brand, launched “alcohol free” beer 0.0 in the United States in 2019. In addition to stating the alcohol content of 0.0%, the product is also labeled “alcohol free”. Recently, a Louisiana woman is suing Heineken USA, saying that the label of Heineken 0.0 beer is misleading because it actually contains 0.03% alcohol. The company said the Heineken 0.0 label and ingredient declaration comply with local food laws and regulations. （Food and Wine）

McDonald’s said it would provide $250 million in low-cost short-term loans in the United States over the next five years to promote the diversification of its franchisees. (Reuters)

Campbell soup warned on December 8 that its gross profit margin would face pressure in the second quarter due to rising labor and raw material expenditure. (Reuters)

From January to October, Uruguay became the second largest supplier of milk powder to China

According to a recent report by the Uruguayan agricultural information website bicho de Campo, from January to October this year, Uruguay surpassed Australia to become the second largest supplier of milk powder to China. The sales volume of Uruguayan milk powder in the Chinese market doubled to 28576 tons. From January to October, China’s imports of dairy products increased by 22.9% year-on-year, with a total import volume of US $12.525 billion, of which US $4 billion was milk powder (including whole fat and degreasing), and US $367 million was infant formula. (Ministry of Commerce)

The price of coffee in the futures market has risen to the highest point in 10 years, and enterprises and traders have locked in supply to cope with the transportation bottleneck and the rising demand at the end of the year. The futures price of high-quality arabica coffee beans now reaches $2.50 per pound, almost double that in early 2021. (Financial Times)