In the last month of 2021, the famous coffee chain Starbucks boarded the hot search in an unexpected way.

According to the news of the Beijing news this morning, the reporter of the newspaper recently conducted an undercover investigation in two Starbucks stores in Wuxi and found that some stores frequently touched the red line of food safety: the ingredients continue to be used after expiration and are sold as a variety of best-selling drinks; Supervisors and clerks “teach by example” tampered with the shelf life, and some ingredients were artificially “extended” for one week; Cakes promised to “stay overnight after unsealing” were secretly put on the shelves the next day. 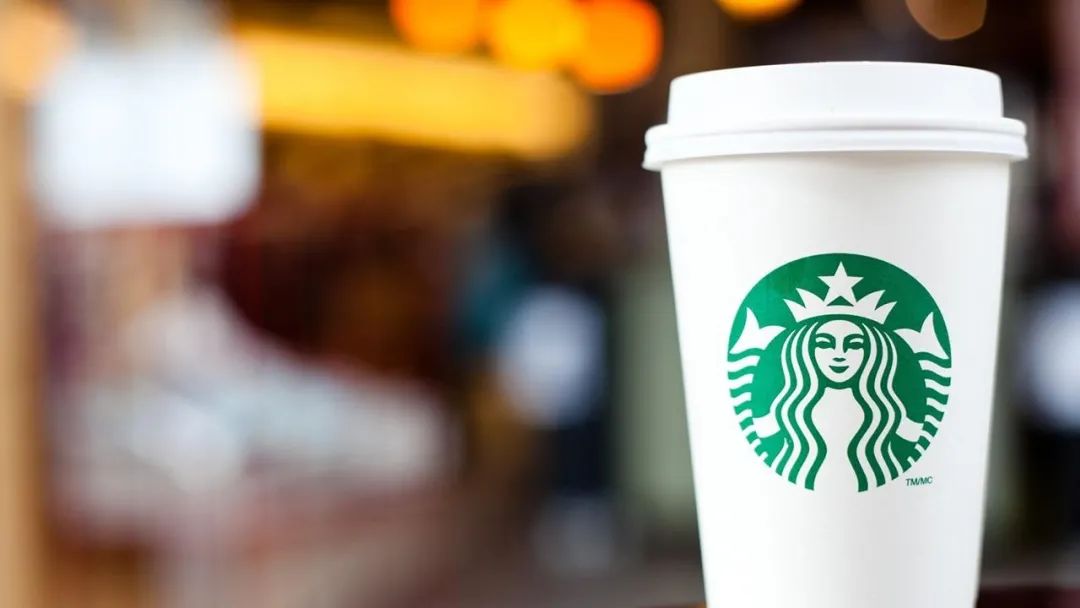 This evening, the Wuxi market supervision department informed on its official wechat that on December 13, in response to the media exposure that the two Starbucks stores in the city had the problem of “replacing ingredient labels and using expired ingredients”, the market supervision department attached great importance to it and immediately organized a special class to carry out comprehensive verification and disposal.

Wuxi’s market supervision department conducted simultaneous investigation on 82 other Starbucks stores in the city and found 15 problems, such as employees not wearing work hats, disorderly placement of goods in the processing zone and incomplete disinfection records, which have been ordered to make rectification. The municipal Market Supervision Bureau conducted an administrative interview with Starbucks (China) in North East China, requiring the company to conduct a comprehensive self-examination and implement rectification of existing food safety problems. 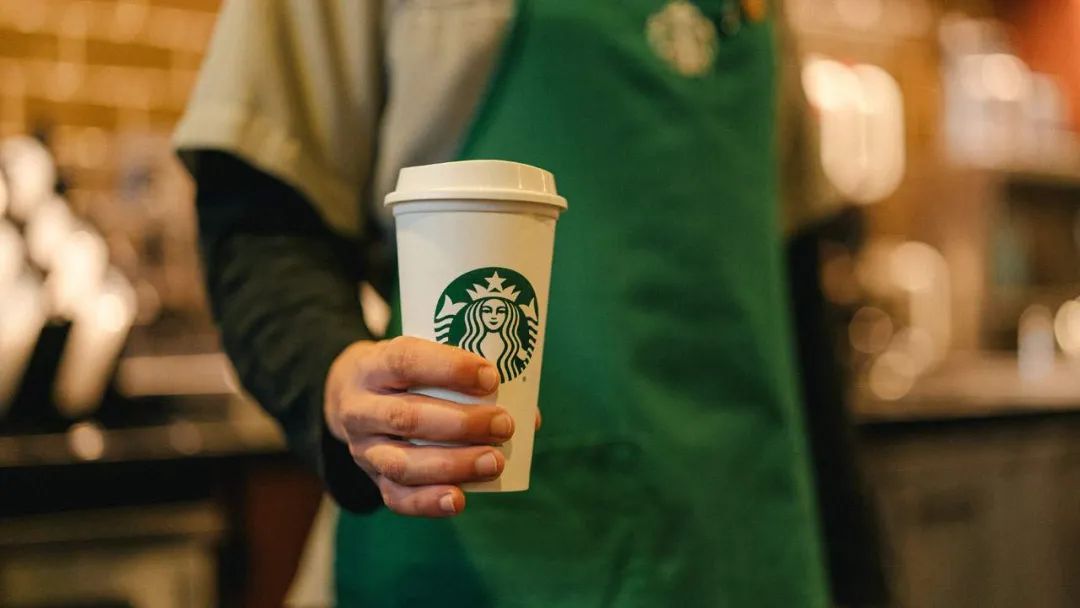 Starbucks China said on its official microblog this evening that after investigation, The partners of the two Wuxi stores reported by the media on December 13 have been confirmed (employees) there are indeed violations in operation. We are duty bound to ensure food safety. The situation of these two stores is a high warning of our shortcomings in the daily implementation of food safety standards. For this, we sincerely apologize to all Starbucks customers. Starbucks also said,

1. The two stores involved have been closed for investigation and rectification; 2. All Starbucks stores in mainland China immediately start a comprehensive self inspection on the implementation of food safety standards; 3. Immediately organize retraining for all retail partners in stores and strictly implement the company’s food safety system; 4. For all stores, increase the frequency and scope of regular inspection and surprise inspection from internal and third parties; 5. Strengthen the internal reporting channel of partners on food safety issues; 6. Actively explore more technical means to reduce the interference of human operation factors and strive to eliminate the occurrence of such events from the source. “In the 22 years since Starbucks entered the Chinese mainland market, we have always put food safety in the first place. We apologize again for this incident and will actively correct it. At the same time, we will closely cooperate with the investigation of relevant government departments and urge the public and the media to continuously supervise us.” Starbucks said. 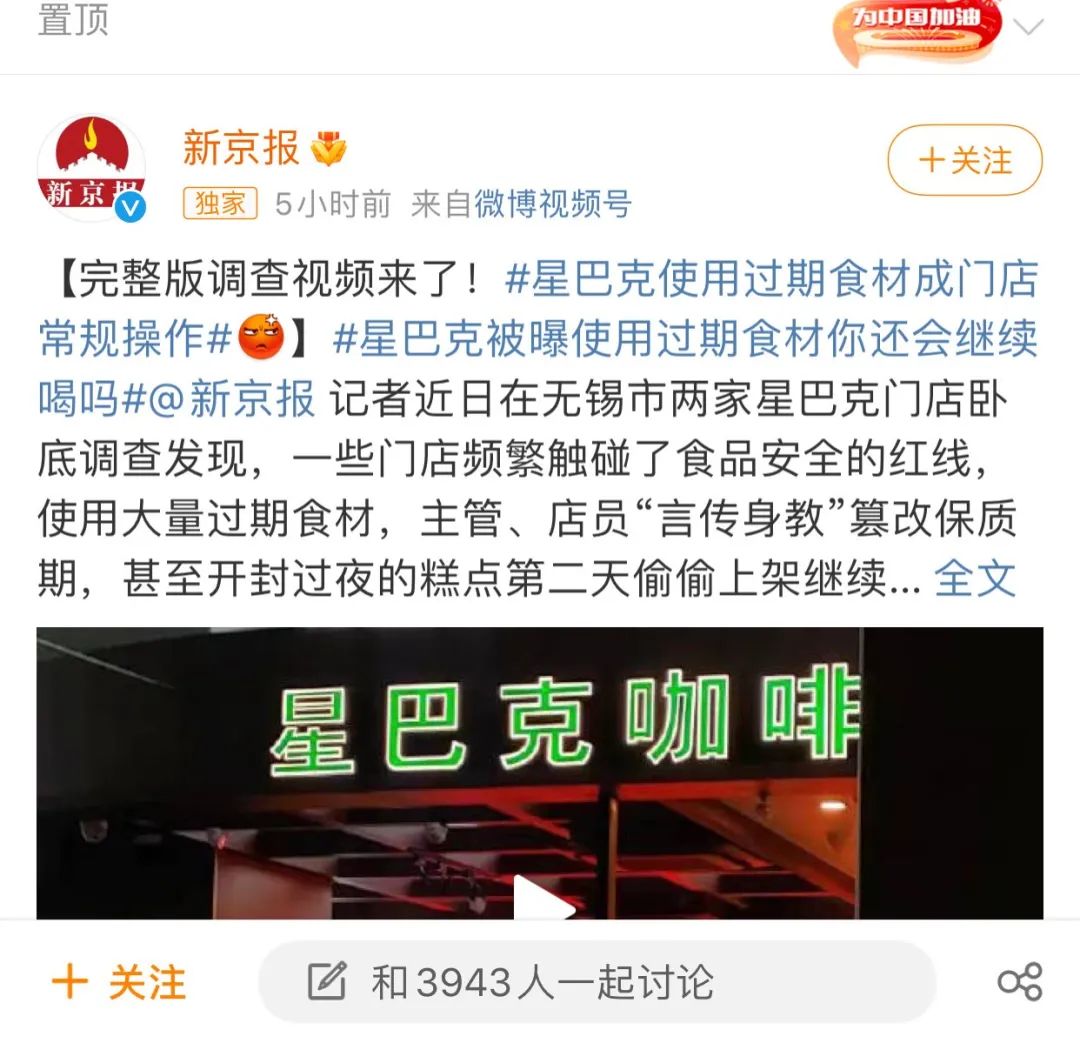 At present, Starbucks has opened more than 5300 Direct stores in more than 200 cities in mainland China. It is one of the largest coffee chains in the Chinese market. Due to its popularity and influence in the industry, the reports focusing on its food safety issues quickly attracted a lot of attention.

According to the Beijing news video report, from the end of October to mid November this year, Beijing News reporters applied to enter two Starbucks stores for unannounced visits.

The two stores are Starbucks Wuxi Changxing building store and Starbucks Wuxi Zhenze Road store. After the investigation, the Beijing News found that the phenomenon of “using expired raw materials” exists in a variety of food materials such as cream, peach flesh, chocolate liquid and Matcha liquid. 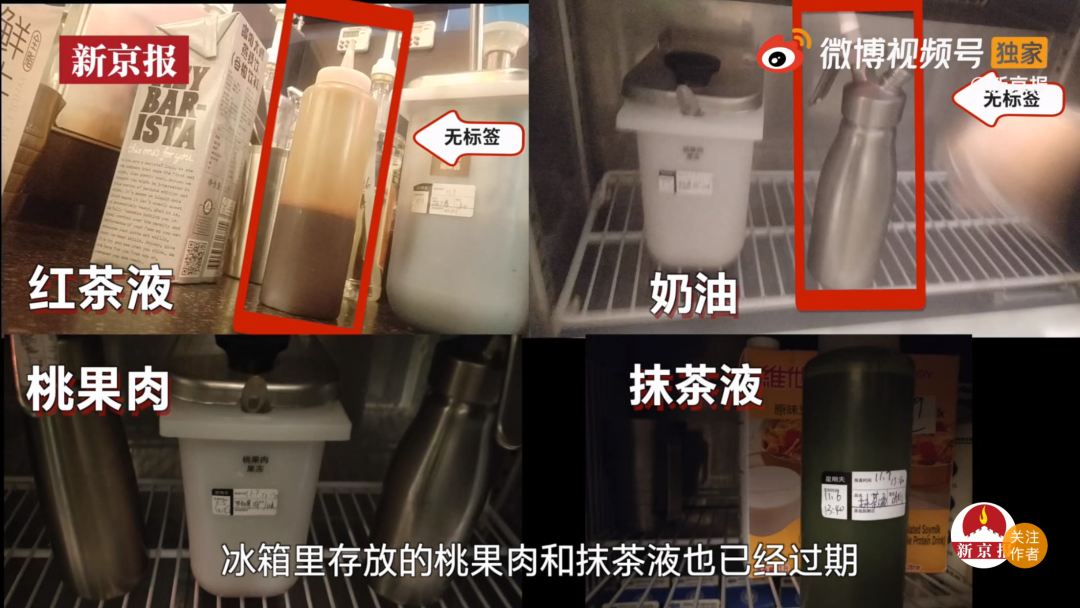 In addition, the video also pointed out the health problems of the above stores. According to Starbucks’ internal regulations, another special cleaning cloth is required to wipe the trash can.

In addition, the Beijing News reported that the two Starbucks stores secretly visited had the same problems. In order to continue to use the expired ingredients, they tore up the expired raw material labels and tampered with the shelf life labels, so as to cover up the real shelf life. According to the secret interview video, the illegal operation of Starbucks stores is to save operating costs.

This morning, when Starbucks China replied to the snack agent’s query, it said: “we have been concerned about the reports about the two Starbucks stores in Wuxi. We are deeply shocked by the food safety issues involved in the reports. We are highly concerned about this incident, have closed the two stores for the first time and immediately launched an in-depth investigation.”

“In the past 22 years since entering the Chinese market, we have been committed to implementing strict food safety standards and resolutely adopting a zero tolerance attitude towards food safety issues. We welcome the public and the media to continuously supervise us.” The company responded. 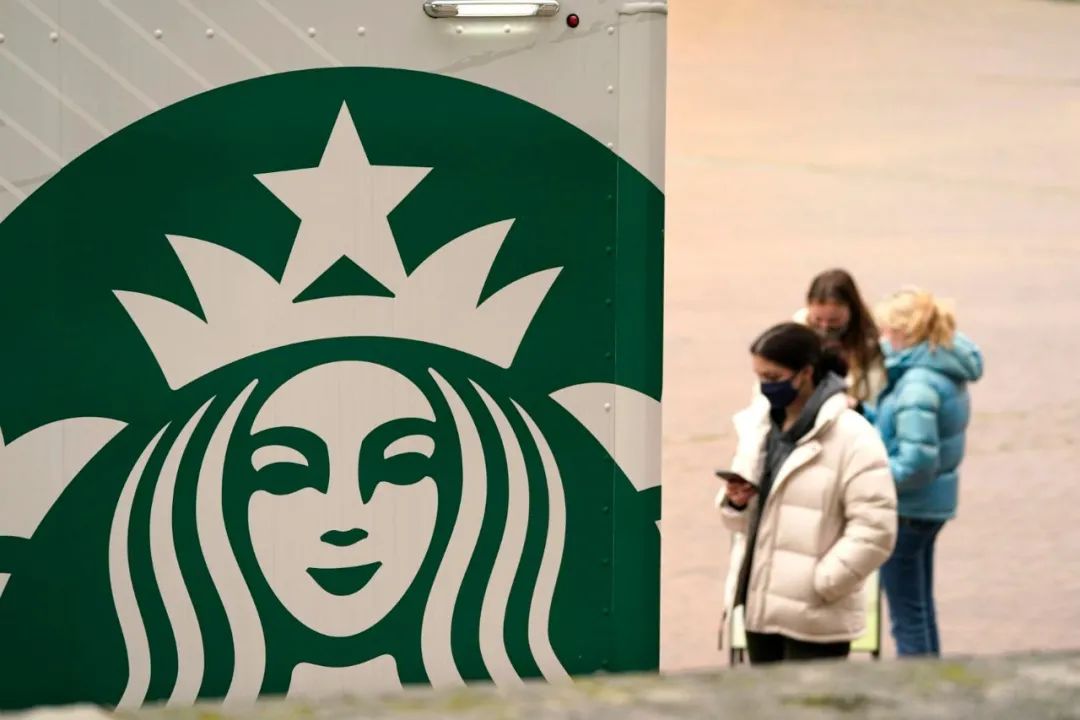 China is the global market of Starbucks, second only to the United States. For the year ended October 3 this year, Starbucks’ same store sales in China increased by 17%.

“Most of our growth in China comes from actively expanding our store footprint and bringing Starbucks experience to more consumers.” The company had previously said that in fiscal year 2021, Starbucks China had a record net increase of 654 new stores, including a net increase of 225 in the fourth quarter.

After years of deep cultivation in the Chinese market, Starbucks has developed into one of the favorite coffee chain brands of Chinese consumers. Based on the brand tracking research conducted by the company in July this year, Starbucks is the first choice for Chinese consumers in the category of non home (AFH) coffee and fresh drinks. One of every two consumers prefers Starbucks to other brands.

For the secret interview report released today, Reuters analysis pointed out that Chinese consumers and the media have become more active in protecting consumers’ rights and interests and supervising the behavior of big brands, including foreign brands and Chinese local brands.