The market supervision and Administration Bureau of Suzhou Industrial Park said today that there are 56 Starbucks stores in the park, all of which are direct stores. As of 16:00 p.m. on December 14, the market supervision bureau of the park had dispatched 38 law enforcement personnel to complete the full coverage surprise inspection of 56 Starbucks stores. Focus on environmental sanitation, food processing and production, health management of employees, etc. During the inspection, no illegal acts such as “changing labels, changing time and selling expired food” reported by the media were found. For the problems found in the inspection that the food additives in individual stores were not stored in the counter (position) and the tools and instruments cleaned and disinfected were not sealed, the law enforcement personnel issued 4 administrative proposals and asked the problem stores to rectify immediately.

Jiaxing Market Supervision Bureau said that the economic development branch immediately conducted surprise inspections on the three Starbucks stores under its jurisdiction, focusing on the health status in the stores, In particular, we conducted a comprehensive investigation on the raw materials of drinks (jam, milk and other raw materials during the opening and preservation period), asking for certificates and tickets, and employees working with health certificates. After inspection, it was found that no food safety violations were found at the site of the three stores, and all food materials were within the preservation period. The inspectors of the Branch Bureau interviewed the heads of each store and required strict compliance According to the provisions of the food safety operation specification for catering services, strictly record the waste account of expired food, so as to ensure the safety of the food sold and make consumers feel at ease. 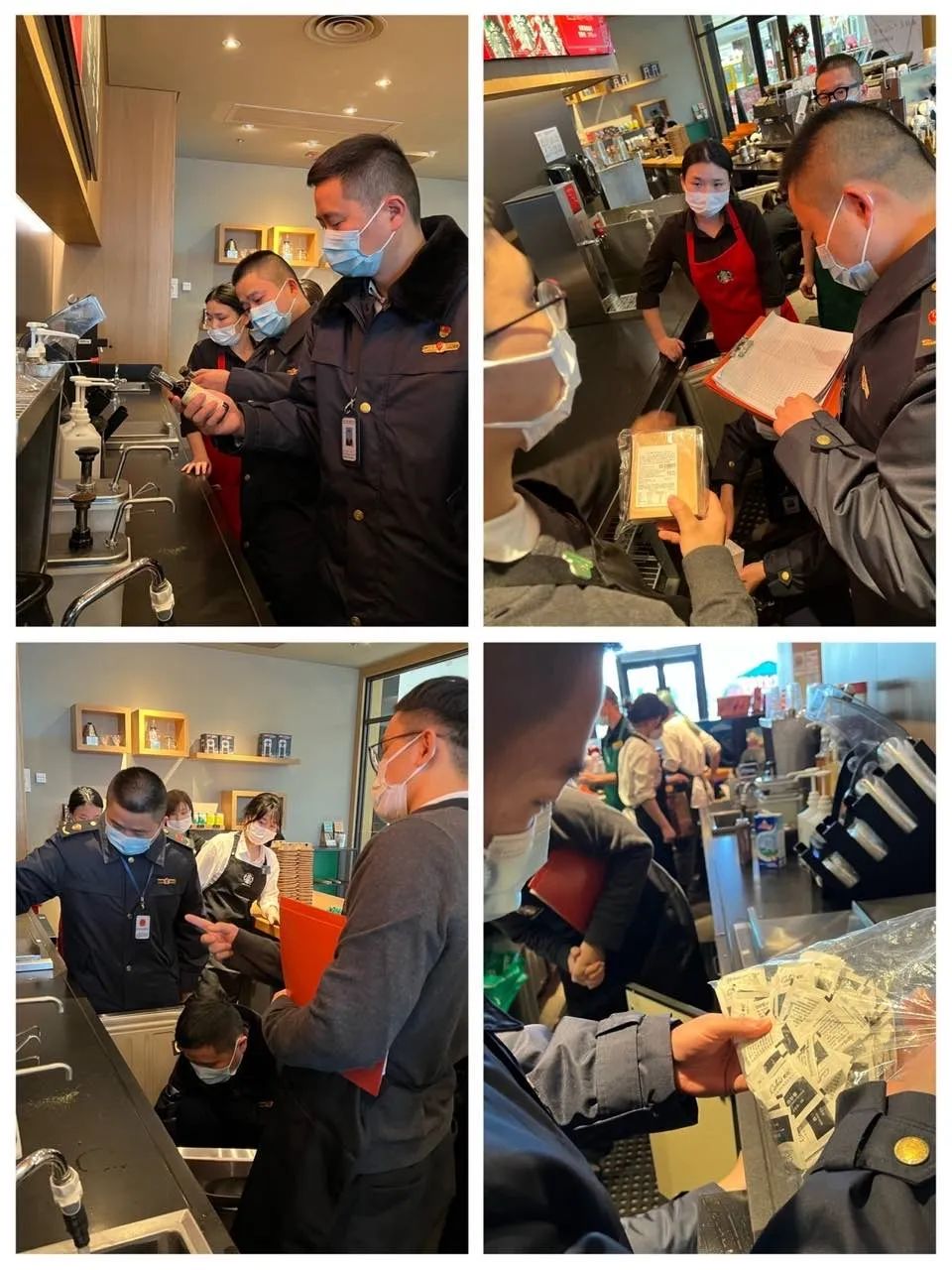 Hongshan District market supervision and Administration Bureau of Chifeng City, Inner Mongolia Autonomous Region said that on the afternoon of the 13th, the Bureau organized law enforcement personnel to carry out full coverage surprise inspections on three “Starbucks” stores in its jurisdiction. Law enforcement officers conducted comprehensive supervision and inspection on the food operation sites and warehouses of Starbucks stores, focusing on the records related to the purchase of food raw materials, the food label identification, and the key links such as food storage, food processing operation process and tableware disinfection, The use of expired food and tampering with production date reflected by network public opinion have not been found in the three “Starbucks” stores under the jurisdiction. In view of the non-standard operation found in the inspection that some employees did not wear work hats, the law enforcement personnel ordered them to correct immediately on the spot. (snack generation)

Ruixing coffee announced today that the Grand Court of the Cayman Islands has approved the plan proposed by Ruixing coffee with the support of its joint provisional liquidator, involving the restructuring of its US $460 million convertible senior notes due in 2025 with an annual interest rate of 0.75%. In addition, the hearing on the relevant plan will be held in the United States on December 16, and all affected creditors have the right to attend.

The privatization of Yoshino’s parent company Hexing group was approved

Hexing group, which operates Yoshino’s business in Northeast China, announced that it voted on privatization today, which was approved by 96.7% of shareholders. Hexing has been listed in Hong Kong for 33 years. December 16 is the last trading day of the stock and January 27 is officially delisted.

Recently, Huai’an Economic and Technological Development Zone and Jinqi biological group, a probiotic business brand of Aoyou, successfully signed a cooperation agreement on the production of probiotic fermentation powder. The total investment of the project is US $20 million. It is planned to build a plant with an annual output of 60 tons of probiotic fermentation powder, with an annual output of 150 tons in the future. Liu xuecong, chairman of Jinqi biological group and vice president of Aoyou dairy China, introduced that Jinqi biological group currently has five factories in three places on both sides of the Strait. After the probiotic fermentation powder production project is put into operation, it can meet all the supply of bacterial powder in the mainland. (Management Committee of Huai’an Economic and Technological Development Zone)

Recently, Qiqihar Municipal People’s government and China Feihe Co., Ltd. held a signing ceremony of “strategic cooperation in the construction of 100 billion ecological characteristic industrial clusters”. The two sides arranged around the intensive processing of dairy products and organic agricultural products. It is reported that the signing project with Feihe will enable Feihe to obtain better environmental support and greater development space. (Phoenix)

Thomson Beijian’s 2021 annual dealer conference was held in Zhuhai from December 11 to December 12. In 2022, Thomson Beijian will continue to build a marketing strategy reform with terminal mobile sales as the core, focusing on building a nutrition day group for thousands of people, and refers to “this is the reconstruction of terminal innovative mobile sales and service mode with incremental interests as the core”. (issued by the company)

During the 9th China Entrepreneur Development Annual Conference held recently, 11 projects signed cooperation intentions on site. Among them, Fujian Provincial Department of Commerce and McDonald’s China signed a strategic cooperation framework agreement. According to the agreement, McDonald’s China will increase its investment in Fujian Province and expand its industrial layout in the next five years. It will invest about 1 billion yuan and open more than 250 new restaurants. At present, McDonald’s has 253 restaurants and 10000 employees in Fujian. (Fujian Provincial People’s government portal)

Yesterday, nongnongshan spring announced that the board of directors would select plan participants and determine the number and conditions of incentive shares to be granted. This plan will help employees’ long-term interests and attract talents. It is expected that nongnongshan spring will maintain medium to high double-digit sales growth in 2022. Company announcement, Zhitong finance and Economics)

Yesterday, the new dairy announced, It is disclosed that it has passed the agreement with new hope Property Service Group Co., Ltd. (hereinafter referred to as “new service group”) ）Signing related party transaction agreements and increasing daily related party transactions. The board of directors agreed that the total amount of milk products purchased from the company by Xinfu group and its subsidiaries in 2021, 2022 and 2023 should not exceed RMB 6 million, RMB 16 million and RMB 24 million respectively, and signed the general agreement on the purchase of milk products. (company announcement)

Yesterday, Yantai zhongchong United Supply Chain Co., Ltd. was established. The legal representative is Jiang Yishan, with a registered capital of 150 million yuan. Its business scope includes the wholesale of pet food and supplies. It is reported that the company is wholly owned by Yantai Zhongchong Food Co., Ltd. (Beijing business daily)

Bingfeng beverage prospectus was 54 asked by the CSRC whether there is interest transmission?

Xi’an Bingfeng Beverage Co., Ltd. (hereinafter referred to as “Bingfeng beverage”) is a subsidiary of the time-honored soda Bingfeng ）IPO has made new progress. Recently, the official website of the CSRC disclosed the feedback on the application documents for the initial public offering of Bingfeng beverage. In view of the four major aspects of the prospectus of Bingfeng beverage, including normative issues, information disclosure issues and issues related to financial and accounting materials, the CSRC raised a total of 54 questions, which not only requires the supplementary disclosure of a number of information, but also needs to explain whether there is any adjustment of income, profit or cost through related party transactions, whether there is benefit transmission, etc. (Beijing News)

Lele tea recently announced that it will open more than 20 new stores between December this year and January next year, and plans to expand the total number of stores in China to more than 300 in 2022. At present, the locations of more than 20 new stores announced are located in Shanghai and its surrounding cities, except for 6 stores in Beijing, Wuhan and Chengdu, which still continues the brand’s overall opening strategy of focusing on the East China market. (Interface)

A beverage store in Wuzhong District, Suzhou was recently listed as a serious illegal and dishonest list by the market supervision department. The store was once a franchisee of the brand milk tea “tea hundred ways”. Previously, Suzhou market supervision and Administration Bureau received relevant clues that the above “tea Baidao” Suzhou stores used expired food. It is reported that the person in charge of chabaidao marketing department said that the “chabaidao” milk tea store mainly focuses on franchising. The Suzhou store involved has closed on October 1 this year and will never become a franchisee of chabaidao. (surging News)

Four ol é stores under huarunwan will be opened this month, and the total number of stores will reach 100

Recently, ol é, a boutique chain super brand of China Resources Wanjia, announced that four stores will be opened in Shenzhen, Guizhou and Ningbo in December. At that time, the number of new stores will reach 15 and the total number of stores will reach 100 in 2021. In the next five years, ol é plans to continue to expand at a double-digit rate of new stores, and plans to enter more than 10 cities. At the end of the 14th five year plan, the sales will exceed 12 billion. (lianshang.com)

Recently, Changning No. 4 branch of Shanghai HEMA Network Technology Co., Ltd. was confiscated of its illegal income of 2041055 yuan and fined 1224633 yuan by Shanghai Changning District market supervision and Administration for engaging in food production and operation or food additive production activities without permission. (Shanghai Municipal Bureau of market supervision)

Recently, Beikang International announced the acquisition of guanghetang, a brand of monthly meal. The former is the parent company of Saint Bella and little Bella baby Bella. The sellers of this transaction are Yunfeng fund and Jingwei China, which have full power to sell shares. (36 krypton)

Genben, a healthy food and beverage brand, has basically completed a million yuan seed round of financing

The healthy food and beverage brand “Genben fundamental” has completed a million yuan seed round of financing, led by Sogal ventures. This round of financing is used for product R & D and team building. “Genben fundamental” was founded in 2021. It is a healthy food and beverage brand. At present, it has launched the Oriental plant extract solid beverage series “Shuiguang berry” and “Wengan ginger”. (36 krypton)

The plant meat company imposible foods has launched its own fast food chain the imposible shop, which is operated by the catering chain dog Haus and only supports takeout services. At present, it has been launched in nearly 40 outlets in 8 states of the United States. （Food & Wine）

The catering industry is becoming younger and younger, accounting for half of the sky after 95 and 00

Recently, five departments in charge of market supervision, public security, environmental protection, natural resources and taxation in Guizhou will work together to strengthen supervision over Baijiu production. It is reported that Guizhou will severely crack down on the illegal behavior of liquor market price and actively maintain the order of liquor market price. In addition, in Baijiu propaganda, we should strengthen the advertising monitoring of Baijiu market, and severely crack down on commercial speculation, production of “special supply”, “special” wine, propaganda and drinking behavior and false advertising information. (surging News)

Yesterday, the notice on the unqualified sampling inspection of 8 batches of food issued by the State Administration of market supervision showed that 8 batches of samples of 4 categories of food, including catering food, edible agricultural products, biscuits and vegetable products, were unqualified. The main problems found were excessive pesticide residues, heavy metal pollution, excessive use of food additives, substandard quality indicators and so on. (General Administration of market supervision) 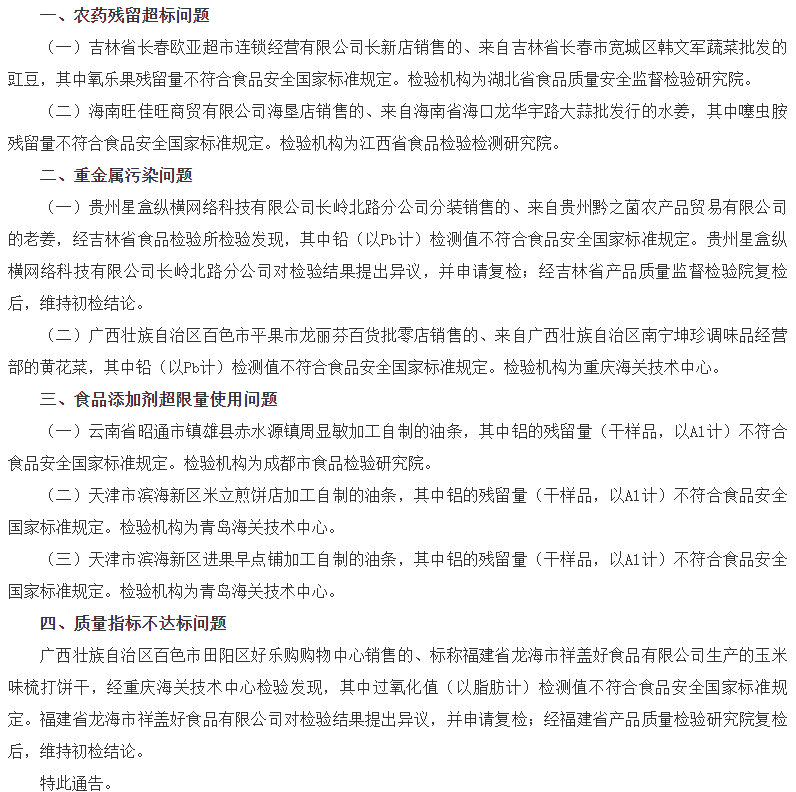 From December 6 to 10, Huaihua market supervision department carried out a week-long special rectification on the “spoof snacks” with vulgar and explicit packaging and food safety problems. During the period, the market supervision department of Huaihua City issued 18 notices ordering correction for the problems found in the investigation, such as incomplete certificates and tickets and imperfect sales accounts, and further urged the food operators to fully implement the main responsibility of food safety and standardize their business behavior. (Hunan market supervision and Administration Bureau)