The ice cream market is still lively in the cold winter.

“For Chinese consumers, ice cream as a seasonal commodity is a thing of the past. Eating ice cream seems to be an important way of life to delight themselves or others.” Jiang Nini, senior vice president of Nestle’s candy and ice cream business in Greater China, told the snack generation today.

Soon, the ice cream giant will also have a wave of new products on the market.

Jiang Nini revealed to the snack generation that Nestle has made an overall plan for its business in the coming year, including the launch of more than 20 new ice cream products in 2022, which will be launched early next year. These new products will cover many brands under Nestle China, such as Nestle “Chengzhen”, Nestle “8th power”, Nestle “mojue”, and the newly launched “Guangdong Xinyi” in the first half of this year, as well as cross-border cooperation brands.

A very clear overall idea is that Nestle China has decided to make more “cross-border borrowing” in the ice cream business.

“For Nestle, a big advantage is that in addition to ice cream, we also have many high-quality brands, which are very suitable for cross-border. 1 + 1 must be greater than 2.” Jiang Nini told the snack generation that Nestle has more than 2000 international brands around the world. Nestle ice cream will make full use of its “internal advantages”, first aim at those brands with sales of more than 1 billion yuan and carry out cross-border cooperation with the ice cream business.

For example, yingma condensed milk is a century old brand from the United States and has been popular in southern Guangdong for half a century. It is a standing product for catering, dessert making and daily diet of many consumers. “Next year, we will creatively use Eagle mark condensed milk as raw material to create a new dessert ice cream.” She said. 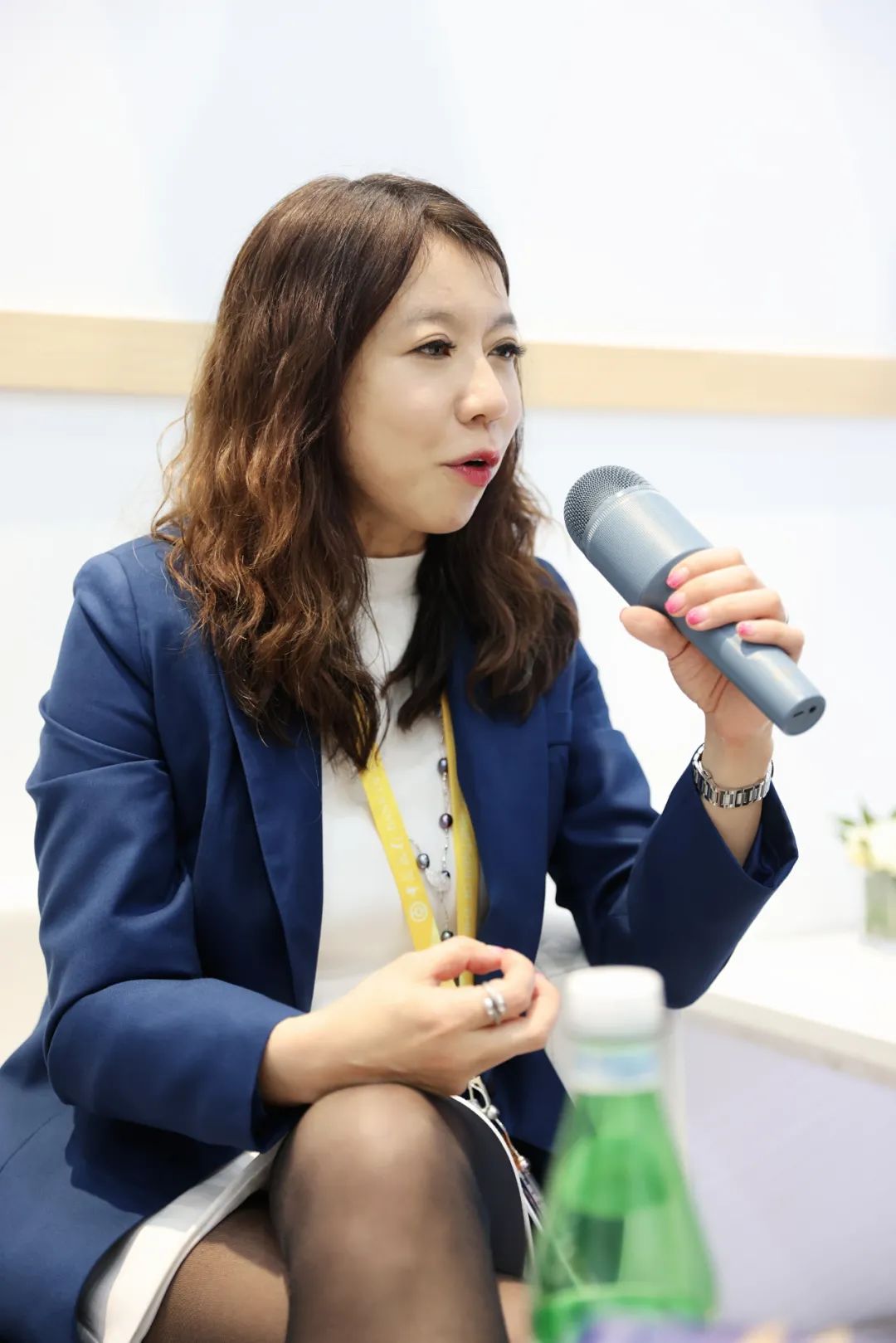 These “cross-border actions” also include the latest extension of Nestle’s other well-known brands in China to the ice cream category.

Xiaoshidai noticed that this summer, Nestle’s global chocolate brand Kit Kat also launched ice cream products and introduced them into the Chinese market by means of import. “Weihua flavor Qiqiao ice cream can be described as a major innovation in the world. Although the global supply is tight and there are many import challenges, this year we will try our best to introduce it to China under the implementation of legal compliance, so that Chinese consumers can taste it for the first time.” Jiang Nini said. 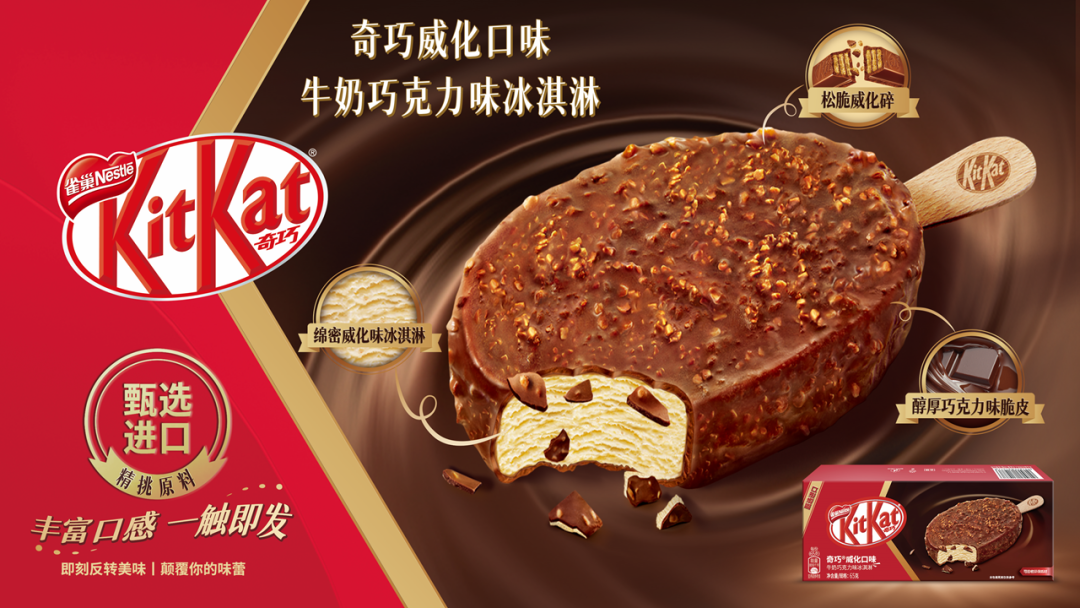 In terms of taste innovation, “cross-border” has also become one of the inspiration sources of Nestle ice cream.

Jiang Nini told the snack generation, for example, that the creativity and ideas brought by tea and coffee are affecting the taste preferences and consumption choices of young consumer groups. “Therefore, in the new products next year, we will integrate the elements of coffee into the 8th power and Mercure sub brands, not only to meet the demands of coffee controllers for coffee taste, but also to provide ice cream lovers with a new choice of afternoon tea.” She said. 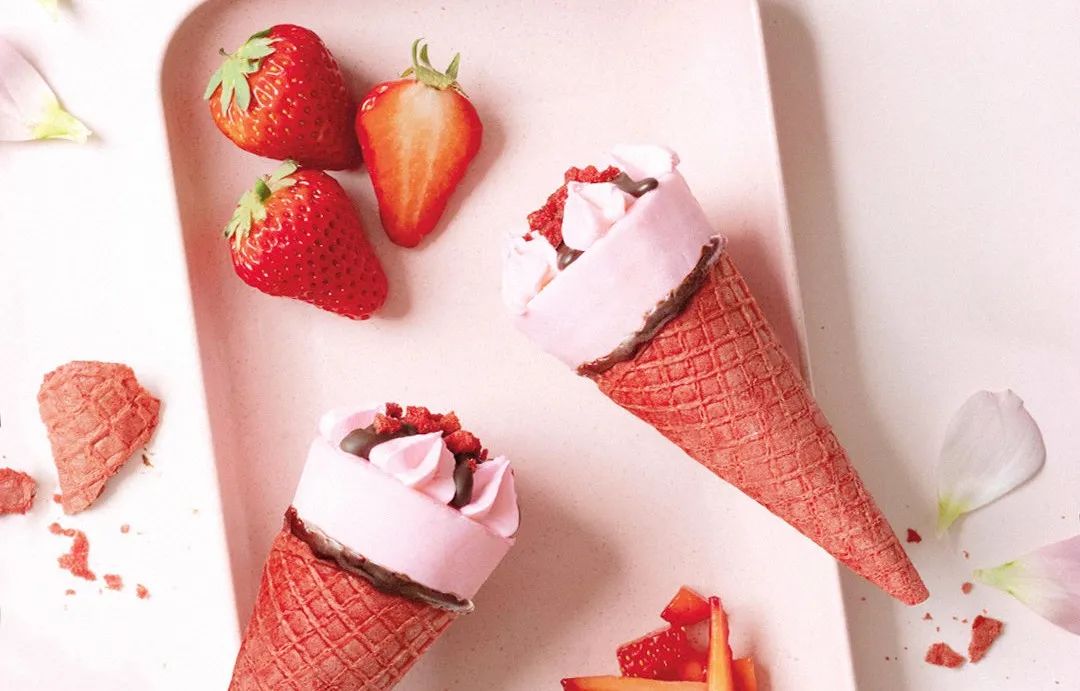 In addition to developing rich taste combinations, the ice cream giant has also made more efforts in the emotional connection between the brand and Chinese consumers.

“When it comes to cultural connotation and emotional value, I believe everyone also has a consensus – today’s Chinese young people, especially generation Z, have higher and higher recognition of national culture; everyone is proud and obsessed with ‘created in China’. The ‘National tide’ is more and more popular with young people.” Jiang Nini said.

In the hands of Nestle China, the new brand “Guangdong Xinyi” launched in the first half of this year is the trump card to cater to this trend.

The snack generation introduced that when it began to layout China’s ice cream market in the 1990s, Nestle, which is optimistic about Cantonese ice cream, acquired the equity of Guangzhou Frozen Food Co., Ltd. (hereinafter referred to as Guangzhou frozen factory) in 1999, and the familiar “Wuyang brand” ice cream in South China has officially become Nestle’s ice cream brand.

In May this year, according to the agreement with its partners, Nestle China officially ended its operation of the “Wuyang” brand. Based on more than 20 years of deep experience in Guangdong market and Guangdong ice cream category, the company launched the Guangdong ice cream brand “Guangdong Xinyi” facing the national market in early 2021. This is also an important platform for Nestle to cater to China’s “national tide” culture. 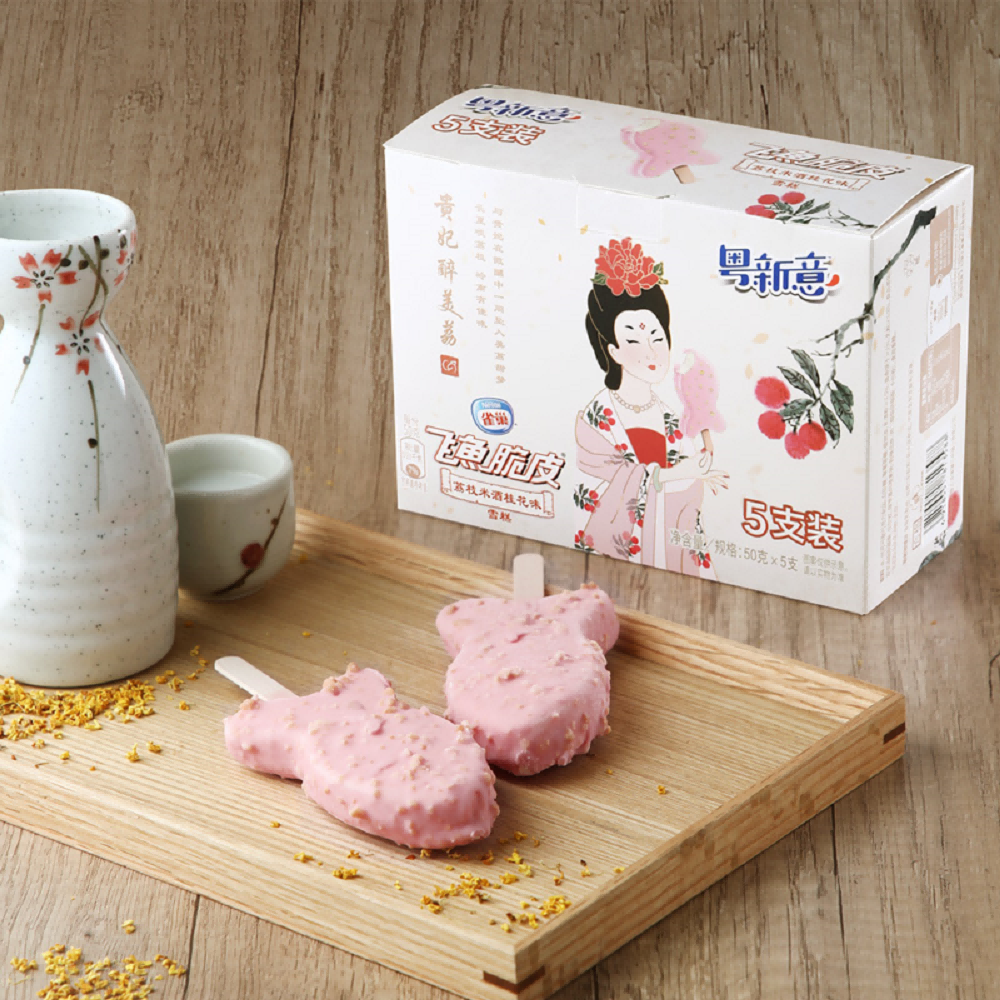 “In the past, most of the impression of Chinese style was ancient, but in recent years, with the rise of the concept of national tide, Chinese style has been given a broader concept. It is not only a traditional culture we are proud of, but also leading a new fashion and trend. One of the representatives of Chinese style is Guangdong culture and food.” Jiang Nini said.

“From the proposal of brand concept, to the R & D and innovation of taste, and then to the packaging design of products, Guangdong Xinyi has absorbed the essence of traditional Guangdong culture and endowed it with the new meaning of the times.” She said that China is an important market with strategic significance in terms of Nestle ice cream, and Guangdong ice cream is a “strategic key category” for its rapid development in China.

In order to integrate the tradition and trend, on the one hand, yuexinyi chose “replica classics” in the research and development of new products.

Many classic ice cream products have been produced in the past 30 years of development of guangfrozen factory. Xiaoshidai learned that the formula of these classic products belongs to Nestle.

“In recent years, we have heard the voices of many consumers on social platforms, who strongly demand the return of classic products. Therefore, we started the return project from 2019, and re launched the ‘traffic light’ and ‘egg milk batch’ this year.” Jiang Nini told xiaoshidai. 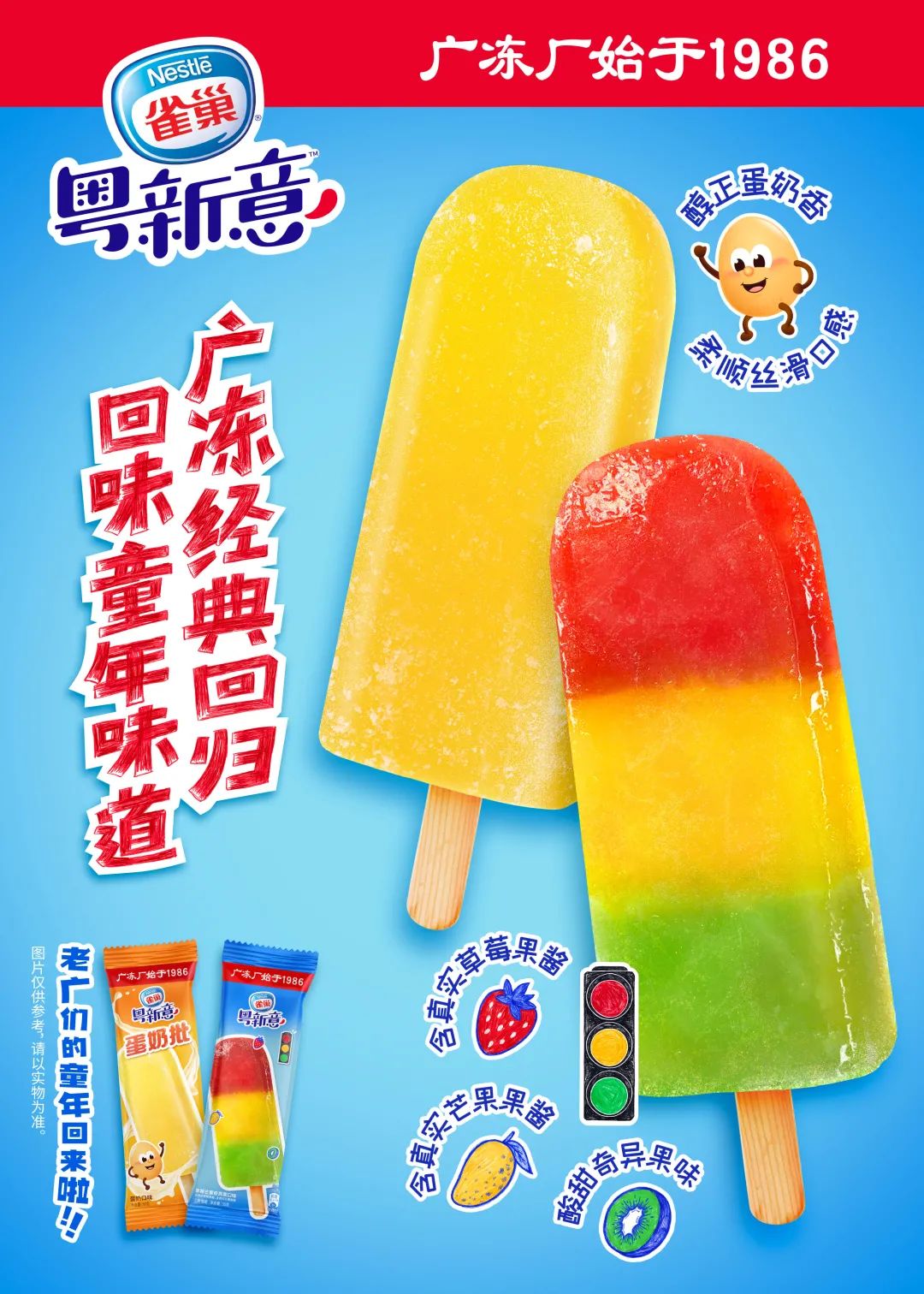 In 2022, Nestle also plans to upgrade the “Classic Silver Tube” and re launch it. “This 3.5 yuan cone ice cream was once the favorite of many ‘laoguang people’. Next year, we will engrave the taste in your memory, upgrade this cone ice cream carrying countless youth and memories, and officially return it to Guangzhou frozen factory.” Jiang Nini said.

On the other hand, Guangdong Xinyi is also “creating new ideas” in new product R & D.

“We hope that the combination of tradition and innovation will not only represent the traditional culture of Guangdong, but also inject new ideas, so that generation Z feels that it is fresh and interesting, rather than conservative.” Jiang Nini said that most of the R & D teams of yuexinyi come from Guangdong or have a Guangdong background. Based on the “deep understanding” of Cantonese desserts, yuexinyi is also applying the inspiration from Cantonese classic desserts to product innovation.

“Guangdong’s food culture has a long history. Among a wide range of sugared water, double skin milk and Phoenix milk paste are the representatives of desserts famous at home and abroad. We apply these flavors to ice cream, which are significantly different from competitive products. I believe they can bring us unique competitiveness.” Jiang Nini said.

In fact, in the field of packaged ice cream retail, the competition pattern of leading enterprises has been quite stable for a long time.

According to the data obtained by snack generation from Euromonitor Euromonitor today, the ranking of the top four companies in terms of market share in terms of total retail sales in China’s ice cream market has not changed in the six years from 2016 to 2021. In 2021, Yili ranked first (17.8%), Unilever ranked second (9.3%), Mengniu ranked third (8.4%), and Nestle ranked fourth (5%).

However, new consumer brands in recent years are bringing new variables to this market. According to IMT’s global new product database, Zhong Xuegao is one of the most active Ice Cream Companies in the domestic market in 2020 after helushue (a brand of Unilever) and Nestle. According to the data, Zhong Xuegao won the sales crown of tmall ice products during the “double 11” Shopping Festival in 2020 and 2021. 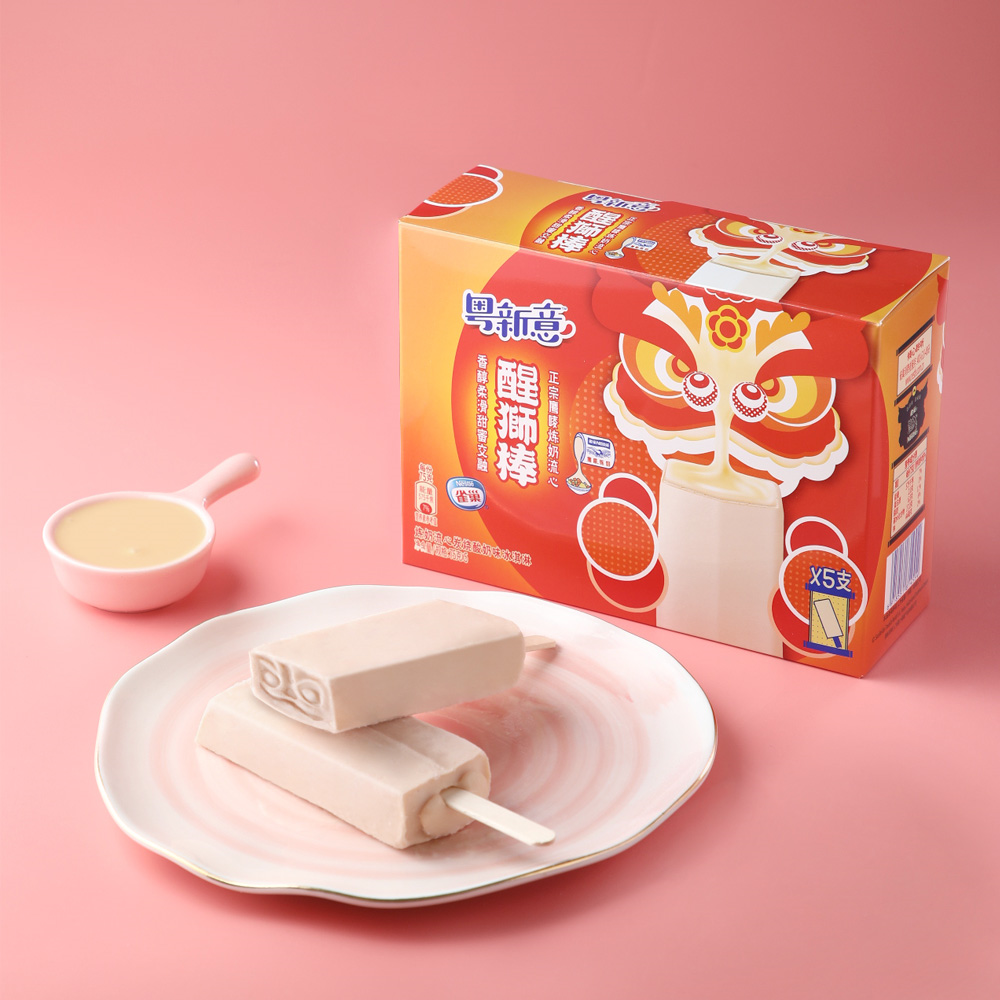 After saying goodbye to the “Wuyang brand” operated for many years, Nestle obviously hopes that the new brand can help it stabilize and even further capture more market share. In the future, Guangdong Xinyi also plans to expand nationwide.

“We hope to use these 20 years of experience and our understanding of the people of Guangdong to cultivate such a new brand. Guangdong Xinyi is born in Guangdong and will also be rooted in Guangdong. Its base camp is still in Guangdong because it is the representative of the culture here. However, on this basis, we hope to bring this brand and brand experience to consumers all over the country step by step and very steadily in the future “Who.” Jiang Nini said.

She said that Nestle is not the first brand to bring Cantonese food culture to the country. “For example, in the previous moon cake and beverage industry, their successful cases have given us a lot of confidence”. It is revealed that yuexinyi’s business “has achieved good results” in 2021.

In the process of national expansion of regional characteristic brands, e-commerce and new retail channels will play an important role. “Yuexinyi will settle in our e-commerce flagship store to help it expand steadily from Guangdong to the whole country.” She said that in addition, yuexinyi is also reaching diversified consumers through diversified e-commerce and home platforms including HEMA, so as to comply with the purchase trend of the whole ice cream industry.