With the coming year of the tiger in the lunar calendar, the food industry is preparing for the “annual exam”. This year, Xu Fuji, a sugar dot giant, has made comprehensive preparations for the New Year campaign.

At present, Xu Fuji is focusing on improving product power and creating a more dynamic brand image with the keyword of “Youth”. This time, Xu Fuji has four categories: annual sugar, cake points, gift boxes and chocolate flavor gift boxes. There are as many as 38 product styles, including 13 new products.

Xufuji is a national brand closely related to the Spring Festival. When it comes to xufuji, many consumers will naturally think of many classic new year products of xufuji, such as new year candy, crisp heart candy and nougat. As a national brand with strong annual flavor gene, Xu Fuji launched a grand self “innovation war” this year, focusing on its classic pastry, nougat and peanut pastry, and launched the “masterpiece” series of high-end gift boxes. 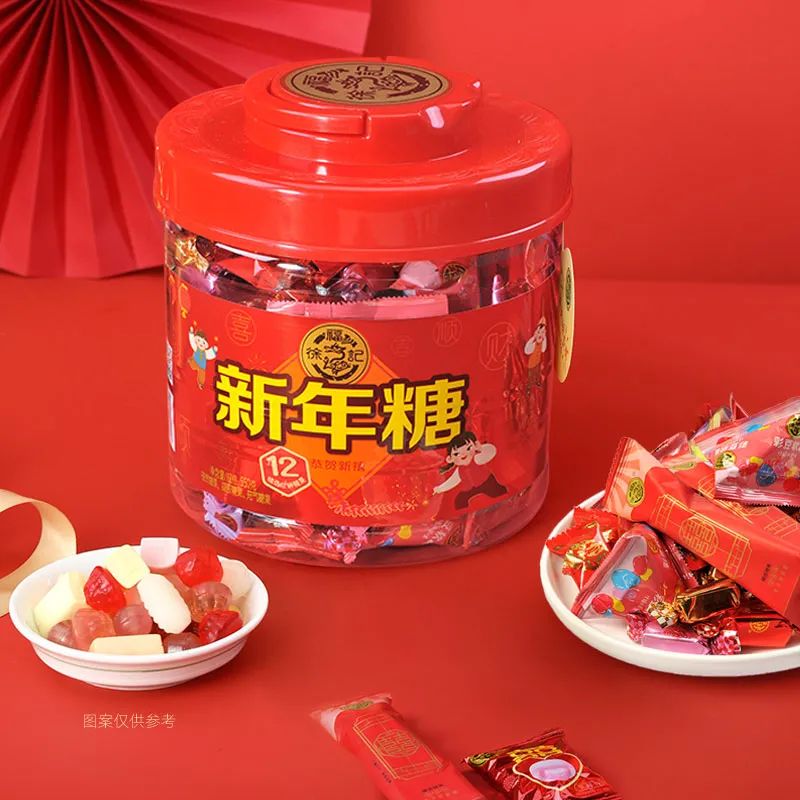 Looking at the ingredient list of the three products in the master’s work series, we can find that Xu Fuji has made a lot of efforts to follow the trend of high quality and health. It is reported that its master series of crisp Heart Candy not only adds imported Qiya seeds, but also pulls sugar manually for at least 6 times, so that 128 layers of sugar skin are evenly integrated into the broken nuts, and then folded layer by layer, which is “crispy and soluble” at the entrance. The content of Badan wood added by nougat is more than 14.5%, and there are freeze-dried strawberry grains, “Luzhou flavor alcohol” taste is endless; Five kinds of refined nuts including Padan wood, cashew nuts, pumpkin kernel, sesame and peanut are added to the nut crisp. The non fried baking process is used to lock the true taste of the nuts. The product focuses on “crisp taste, salty and sweet aftertaste”.

Behind the master’s work is a c2m product innovation model, which stems from Xu Fuji’s capture of consumption trends and changes in market direction. Xu Fuji believes that health demand has become a major consideration for consumers’ purchase behavior. At the same time, the sudden rise of nut power in the snack market can not be ignored. 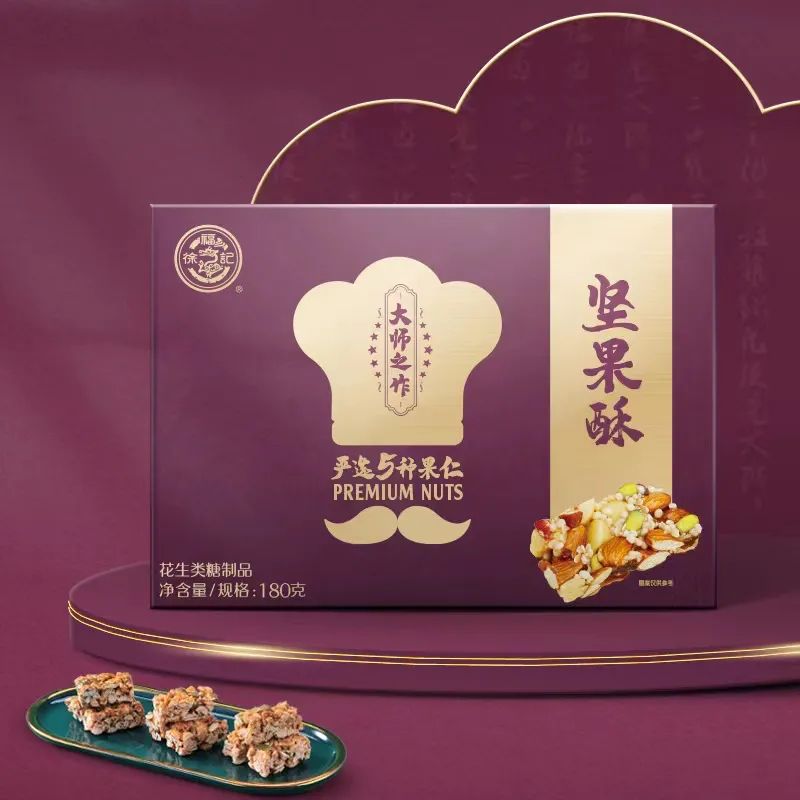 The 2021 tmall nut consumption trend report released by tmall and cbndata shows that pastries, nuts and biscuits lead the snack consumption, with a total market contribution rate of more than 50%. Among them, the market scale of fried nuts is second only to cakes and snacks, and ranks second in snack consumption.

Different from the direct launch of nut products and the face-to-face confrontation with nut representatives, Xu Fuji chose to integrate nut ingredients into annual sugar this year. This can not only make its classic annual sugar series glow with new vitality, but also is expected to directly drive the sales of this advantageous category and test the high-end of annual sugar. After all, in the consumption of new year goods, Xu Fuji’s new year sugar series has a unique memory and natural favor in the hearts of consumers.

Cbndata’s 2021 annual trend report on online snack gift boxes points out that the Spring Festival is the most important growth node of snack gift boxes, which usually peaks from November to January of the next year. Damp taste, ancient taste, flavor and interest have become the four major trends of snack gift bags.

This year, in addition to maintaining the Jufu brocade gift box launched last year, Xu Fuji’s gift box series continues to set foot in the two main directions of interest and fashion. On the one hand, focusing on the background of the Lunar New Year of the tiger and catering to the annual consumption boom of the Chinese zodiac, Xu Fuji launched an interesting gift box for the Chinese zodiac in the year of the tiger. There are not only more than 10 classic products in the gift box, but also red envelopes, calendars, origami, etc. with the tiger as the main image, which vividly reflects the “good intentions” of consumers in the year of the tiger. 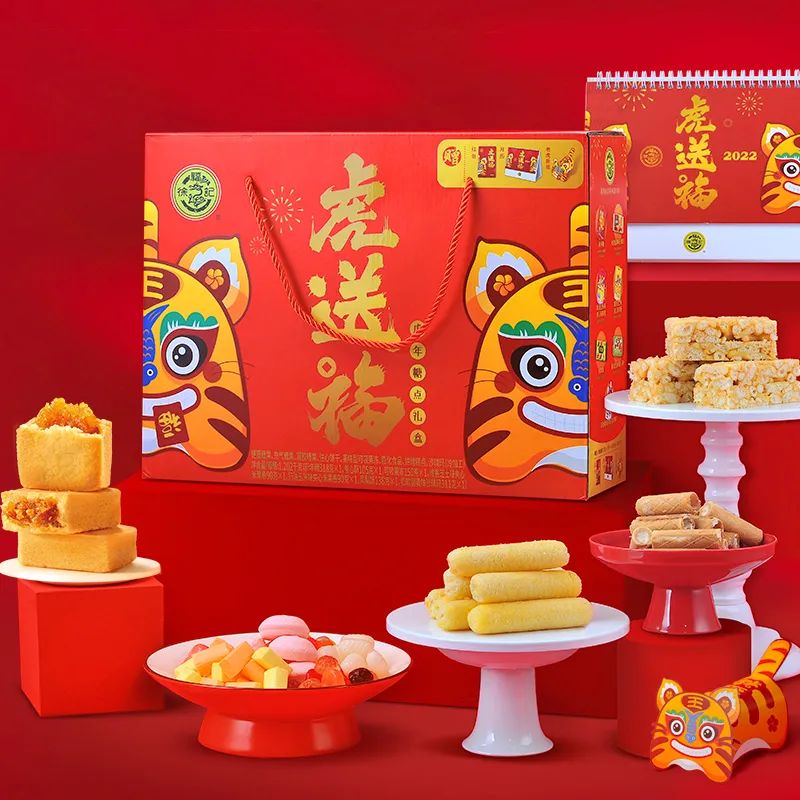 On the other hand, Xu Fuji and Coca Cola launched a joint gift box to actively try the cross-border integration of trendy flavor again. In this joint gift box called “fule Haoli”, consumers can enjoy a variety of products such as drinks and sugar points, implying that they should “eat and drink well” in the new year. Cbndata report also shows that in the past two years, online joint cross-border snack gift boxes have increased by more than 12 times, especially favored by core groups such as generation Z and exquisite mothers.

The carefully planned gift box series can bring more discussion topics for Xu Fuji from the marketing level. One box covers a wide range of products, which can not only be shared by the whole family, but also meet the gift giving needs, so as to consolidate Xu Fuji’s leading position in the increasingly competitive new year goods campaign. 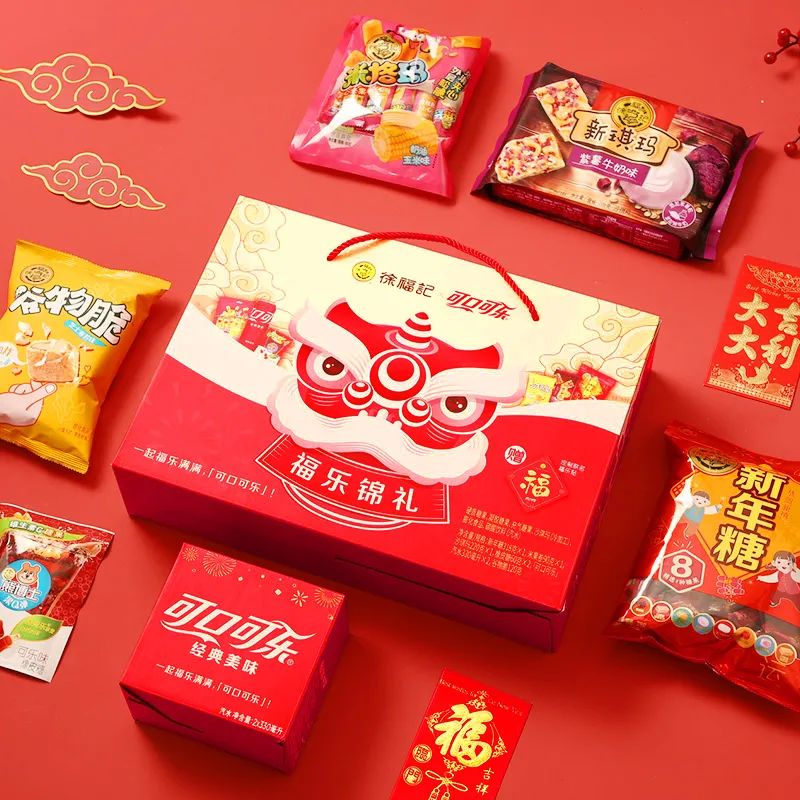 The marketing communication in the Spring Festival season has always been regarded by Xu Fuji as the best window for dialogue with consumers. In this marketing campaign, Xu Fuji’s “killer mace” is his new spokesman Gong Jun. In this ten million level marketing investment, Gong Jun continued to be active in the diversified launch and communication of cross screen media, outdoor media and social media. 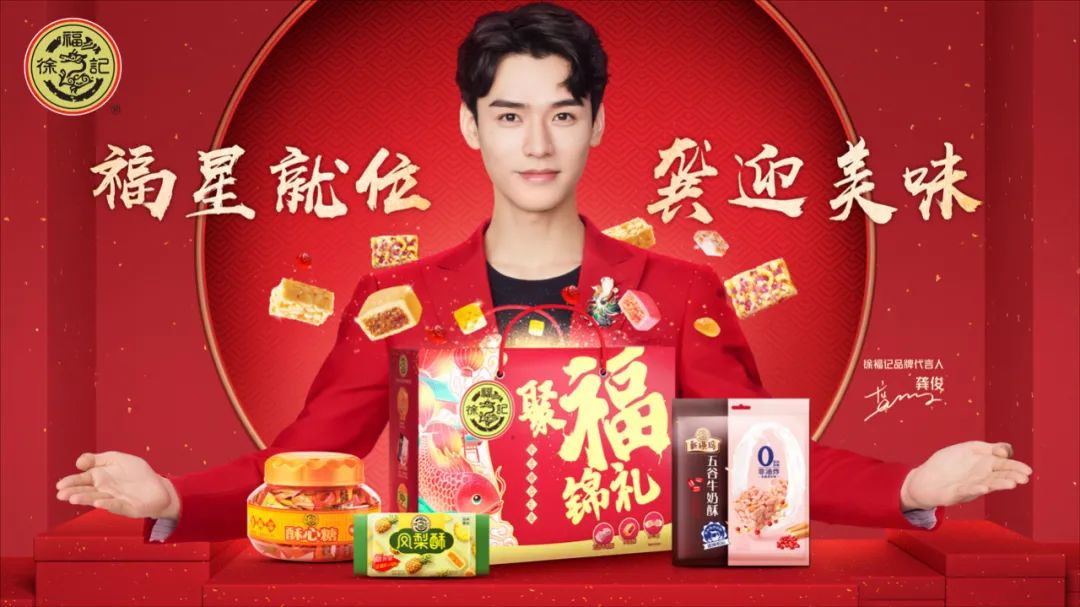 Since Gong Jun, the official publicity spokesman in October last year, Xu Fuji has made many efforts and innovative attempts in the rejuvenation of marketing. At present, Xu Fu Ji pays more attention to the gathering place of young consumers, namely micro-blog, jitter and other social media platforms, and actively seize important nodes such as official propaganda and spokesperson’s birthday, important marketing nodes such as tiktok and Spring Festival, and use rich and interesting interactive methods to win the circle in the media platform.

In the face of the rapidly changing development pattern of today’s consumer market, Xu Fuji is catching up and showing strong evolutionary power from the big wave of health to younger consumers and communication methods. This is also inseparable from Xu Fuji’s Precipitation over the years.

In 1992, the four brothers of the Xu family began their entrepreneurial journey, and from then on, they wrote Xu Fuji’s 30-year brilliant entrepreneurial history. Xu Fuji has not only become a leader in the manufacturing and sales of various categories in the food industry, but also ranked among the top in the market share of candy categories and ShaQima products. Its products leave the unique growth memory of the post-80s, post-90s and even post-00s. As the brand story says, “brighten the happy moment with delicious food”.

Standing at 30, it’s just 30. Can Xu Fuji continue to make progress and become the largest business unit of Nestle’s global candy business in the future? It can be predicted that Xu Fuji’s challenges will be many and his foundation will be very solid. Let’s wait and see what happens next.