China Resources Heineken beer production base or landing in Xiamen

Recently, Xiamen Tong’an issued a notice on the selection of evaluation institutions for the project of “China Resources Heineken beer production base”. According to the released information, the comprehensive project of Xiamen China Resources beer town regional settlement headquarters production base is planned to be located in Tongan new town area around the East Sea area, where it will invest in the construction of beer town project with beer as the theme and integrating commerce and residence, as well as digital town and China Resources beer regional settlement center. (leju.com Xiamen)

On January 15, the commissioning ceremony of Zhengda Group Inner Mongolia food processing project and Mengniu China Dairy Industrial Park Phase VIII project was successively held in Hohhot. It is reported that the Inner Mongolia food processing project of Zhengda Group is an important supporting plant for the whole pig industry chain project of Zhengda Group in Inner Mongolia. The total investment of the project is 1.3 billion yuan, covering an area of 380 mu, which is constructed in two phases. Mengniu China Dairy Industrial Park Phase VIII project has a total investment of 2.1 billion yuan and an annual output value of 5 billion yuan, which is a milestone for enriching the “milk capital” product matrix and optimizing and improving the level of the industrial chain. (Hohhot daily)

Wuwei Yili green production and intelligent manufacturing demonstration application project is the only dairy processing enterprise laid out and constructed by Yili Group in Hexi Corridor, and it is also the project with the largest overall investment among the hundreds of branches of Yili Group. By the end of 2021, 124436 tons of Jindian, pure milk, yogurt and other products will be produced, with an output value of 1000.2 million yuan. Since its establishment in 2007, Lanzhou Yili dairy has developed into the largest dairy enterprise in Gansu Province. By December 2021, the cumulative output was 1.51 million tons, the cumulative revenue was 9.204 billion yuan, and the cumulative tax payment was 119 million yuan. In addition, since 2019, Lanzhou Yili factory has achieved an output value of more than 1 billion yuan for three consecutive years. (China Gansu network)

Jianhe issued an announcement on the proposed sale of senior notes

Today, Jianhe (H & H) International Holdings Co., Ltd. issued an announcement on the proposed sale of senior notes. The announcement shows that the company proposes to offer senior notes valued in US dollars only to professional investors. The notes will be guaranteed by several subsidiaries of H & H International Holdings. The pricing of these notes (including the offer price and interest rate) will be determined through cumulative bidding coordinated by the preliminary buyer. (issued by the company)

In 2021, the liquor output of Maotai Group increased by 18.5% year-on-year, and a total of 198 liquor brands and 2694 products were reduced. For 2022, it is clear that it will enhance the brand competitiveness of “Maotai family”, build a digital marketing platform, and fully complete the iterative upgrading of “the third generation store” of Maotai liquor store. （Wind）

Listing of Sanyuan biology, the core supplier of Yuanqi forest

Recently, the GEM Listing of Shandong Sanyuan Biotechnology Co., Ltd. has been registered and effective, and plans to raise 900 million yuan. The raised capital of 770 million yuan is used for the project of erythritol and technology center with an annual output of 50000 tons, and 130 million yuan is used to supplement working capital. Sanyuan biotechnology is a professional manufacturer that started the industrial production of erythritol earlier in China. In 2021, Yuanqi forest became the largest customer of Sanyuan biotechnology. The other top five customers include hhoya B.V., saroya, ADM (Shanghai, the United States, Europe) and nongnongshan spring. (Inspur new consumption)

Recently, the gem IPO application of Guaibao Pet Food Group Co., Ltd. was accepted by Shenzhen Stock Exchange. It plans to issue no more than 40004500 new shares, accounting for no less than 10% of the total share capital. After the issuance, the total share capital will not exceed 40004500 shares. It is expected to raise 600 million yuan. Zhongtai securities is its sponsor. The funds raised will be mainly used for the production expansion and construction project of pet food production base. From 2018 to the first half of 2021, Wal Mart, an American chain retail giant, has always been the largest customer of Guaibao pet food. The two companies have established a cooperative relationship since 2014. The main trading products are dried chicken breast and duck breast. (Tencent)

Peijie, a direct brand of Chongqing hotpot, completed round a financing of RMB 100 million

It is reported that Peijie, a direct brand of Chongqing hotpot, has completed a round of financing of RMB 100 million, which is led by zhengxingu capital, followed by 13 capital, Shanghai Linqi, and Taihe capital as the exclusive financial adviser. This round of financing will be used for the expansion of offline stores, brand building and talent expansion, and help sister Pei promote the taste of Chongqing hot-pot/" 22375 rel="nofollow" target="_self">hot pot and Chongqing culture to the whole country. (I knew it)

On January 14, Sanyuan shares announced the 2022 restricted stock incentive plan (Draft). The number of restricted shares granted by the company this time was 22.46 million shares, accounting for about 1.5% of the total share capital of the company at the time of announcement of the plan, 149757426 shares. (gelonghui)

On January 14, the Evian brand team announced the launch of Evian soda, which will be sold in high-end restaurants and hotels across the United States in 2022. Evian soda includes 330 ml and 750 mL packages. （BEVNET）

Starbucks UK launches limited edition Tu ‘NAH pure tuna sandwich. The sandwich is 100% vegetarian and is available in all Starbucks stores and drive thru restaurants in the UK at a price of £ 3.29. Tu’nah sandwich is Starbucks’ first plant-based fish menu option in the UK. (plant based meat products)

Today, international brands such as Coca Cola and Pepsi called for a global agreement to combat plastic pollution, including cutting plastic production. More than 70 signatories of the joint statement include consumer goods companies such as Unilever and Nestle, as well as retailers Wal Mart and BNP Paribas. (Reuters)

Today, according to CNBC, Wal Mart is planning to create its own cryptocurrency and NFT. In addition, the company applied for several new trademarks in late December 2021, indicating its intention to manufacture and sell virtual goods. However, a Wal Mart spokesman did not immediately respond to a request for comment. (rhythmic blockbeats)

Novel coronavirus pneumonia, such as Starbucks and Chipotle, said that due to the shortage of labor and the increase in new crown pneumonia cases, temporary restrictions on individual stores or areas would be restricted, including restriction of meals and shorter business hours. （fox business）

Recently, the Hong Kong Consumer Council tested 49 samples of different types of coffee products on the market, including coffee beans, coffee capsules, coffee powder and instant coffee powder. Four of them are labeled as single coffee beans, and the price of each package ranges from 15 yuan to 168 yuan. The test items include acrylamide, caffeine, pesticides, mycotoxins, microorganisms and heavy metals. It is found that the content of genetic carcinogen acrylamide in 47 samples can vary by nearly 14 times, and the content of instant coffee powder is higher. (Hong Kong Economic Daily)

Be careful when buying leftover food

Leftover food is generally cut corners, bits and pieces, etc. in the process of food production. Leftover food is indeed affordable, but consumers should beware of some businesses selling inferior food in the name of “leftover”. (Xinhuanet)

Studies have shown that a plant-based diet can reduce greenhouse gas emissions by 61%, while maximizing carbon sequestration and reversing carbon emissions caused by global animal husbandry. （The Beet.）

Baidu meituan and other enterprises announced the opening of interconnection cooperation

On January 17, Baidu, together with more than 10 enterprises including meituan, xiaohongshu, SF, Ctrip, Zhihu, Tongcheng, cat’s eye and 58 in the same city, announced the opening of in-depth connectivity cooperation. It will start with the Spring Festival and carry out connectivity cooperation at the three levels of traffic, technology and service ecology. (economic news agency)

Millet products and fish announced the termination of operation

The Baltic Sea freight index shows that the standard freight of routes from Asia to North America has increased six times year-on-year in the past year. Among them, the highest quotation from Shanghai to Los Angeles soared nearly 12 times year-on-year. Industry insiders said that for international trade, it will shrink the whole trade market, and there may be a long-term ice age in the future. (CCTV Finance)

Double the price of recyclable plastics

As enterprises compete for limited supply, the price of the most common recyclable plastics doubled in a year to a new high. According to the data group ICIS, since January 2021, the price of post consumer polyethylene terephthalate (PET) sheet in Europe has increased by 103% to € 1690 per ton after the manufacturers of household goods, food, beverage and clothing adopted the new use target of recycled plastics. (Financial Times)

According to the data released by the National Bureau of statistics on Monday, the annual gross domestic product (GDP) in 2021 increased by 8.1% over the previous year at constant prices, with an average growth of 5.1% in two years. In terms of quarters, it increased by 18.3% year-on-year in the first quarter, 7.9% in the second quarter, 4.9% in the third quarter and 4.0% in the fourth quarter. (interface News)

In 2021, the total retail sales of social consumer goods increased by 12.5% 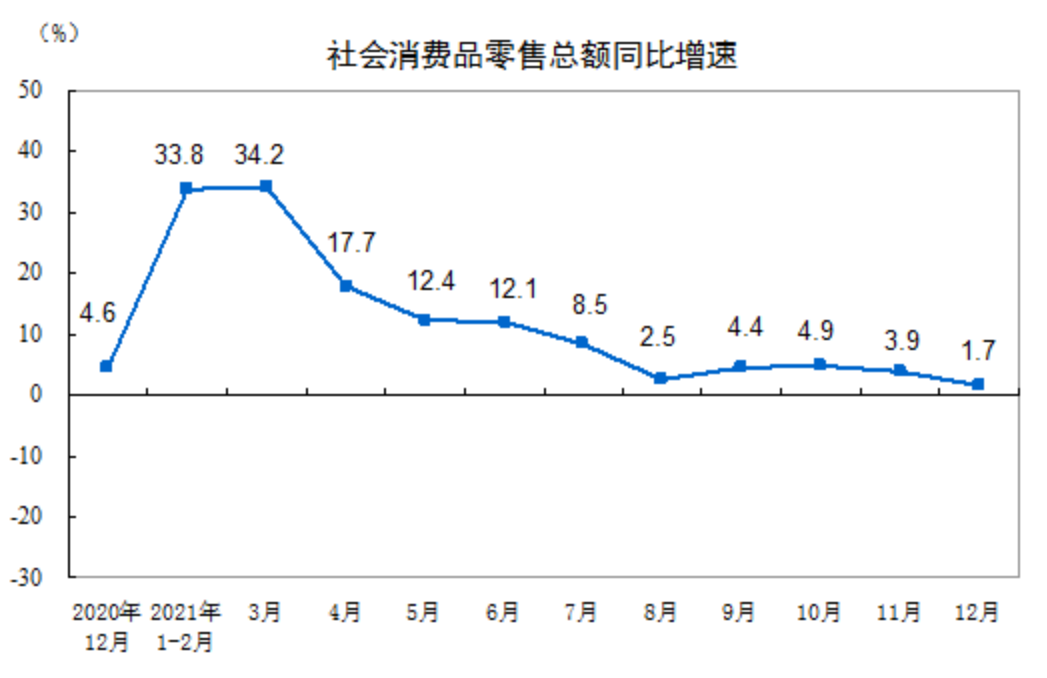 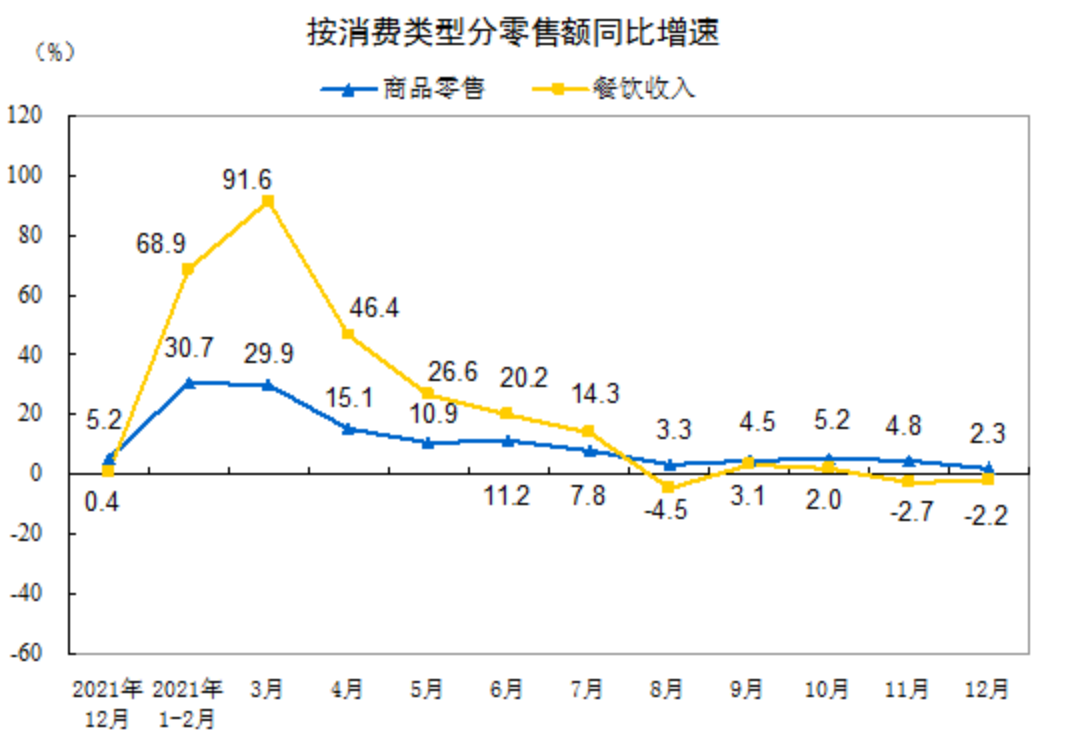 On January 17, the National Bureau of statistics released China’s economic data for 2021. The annual birth population was 10.62 million, and the birth rate was 7.52 ‰; The dead population is 10.14 million, and the population mortality rate is 7.18 ‰; The natural population growth rate is 0.34 ‰. In 2021, China’s total population continues to grow, with a net increase of 480000. China’s total population will remain above 1.4 billion for some time to come, and the effect of the three child policy will gradually appear. Among the birth population, the proportion of second children increased from about 30% in 2013 to about 43% in 2021. (National Bureau of Statistics)