As the Lunar New Year of the tiger approaches, the competition in the liquor festival market has entered a key sprint stage.

This year, Budweiser beer seized the key node of the new year of the tiger and held the “2022 Budweiser red luck street activity” in more than 70 cities across the country. At a time when the annual flavor is fading, Budweiser aims to lead consumers to awaken the annual flavor. Such a large-scale and novel activity mode is also unique in the industry. 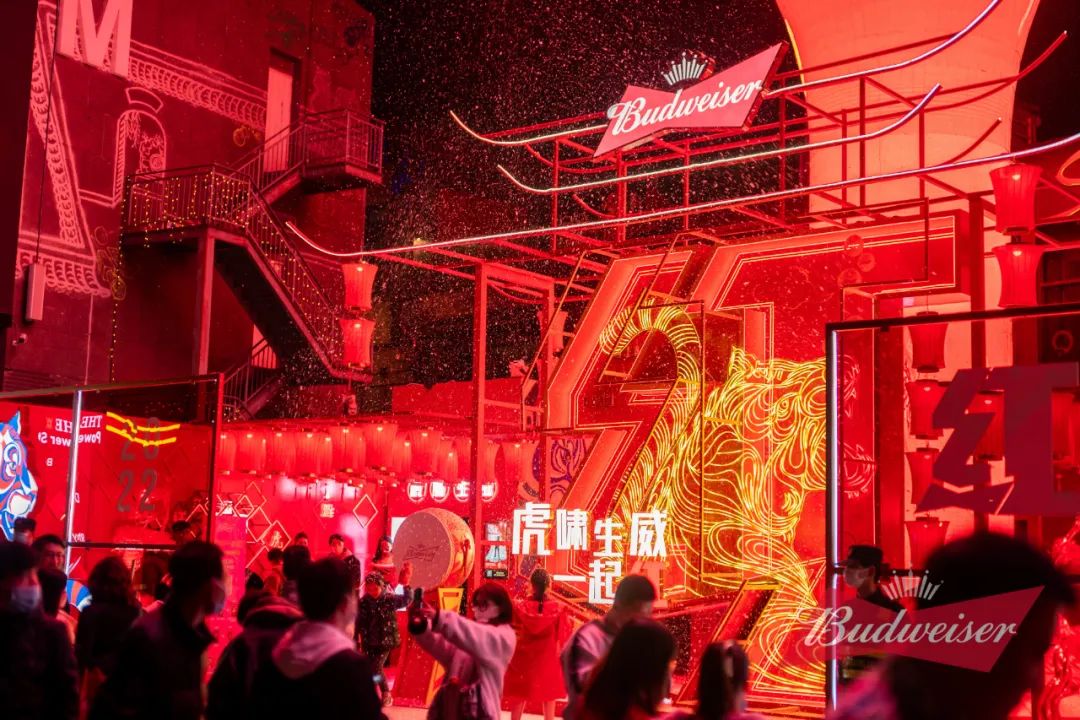 Whether it’s the visible “tiger roaring”, the auspicious beast attracted by fireworks, or the live wall painting “tiger roaring and power” by the Guinness world record master, Budweiser Hongyun Street pays close attention to the preferences of young consumers in terms of installation, atmosphere, quality, interactivity and even the location of activities. It can still highlight its unique highlights in the fierce competition in the industry and has become a place for young trendsetters to punch in. After successfully sucking the powder, it highlights the strong flavor of the year of the tiger and interprets the flavor of the year of the tiger for consumers in an all-round way.

During the Spring Festival this year, walk into Budweiser Hongyun street in Lan Kwai Fong, Chengdu and “roar” into the microphone, you can get your own unique “tiger roar” – with the help of algorithms and programs, the sound will be publicized and highlighted in the form of tiger stripes, so that you can see your own voice and welcome the year of the tiger with your own “tiger roar”.

This is Budweiser united with UCCA lab and artist Guo Ruiwen × 3asic presents the work “roar”. When the new year comes, I hope that through the linkage of works, ordinary audiences can release their young “true self attitude”, alleviate the fatigue and pressure of the past year and “roar out” loudly.

The sound pickup device can simulate the different sounds of the audience into geometric tiger patterns in real time, just like being in the acoustic space. The audience can feel the visual scene where the tiger patterns are constantly transmitted to the distance and coerced.

Budweiser’s new attempts and explorations in cross-border art are more than that. In addition to the above-mentioned Chengdu activities, there was also a cross-border audio-visual interactive feast of sound, light and people dancing at the “Budweiser Hongyun street activity” of Beijing Heping Fruit Bureau: the media artist group noise Temple took the “Pang”, the seventh son of the dragon, as the subject connecting reality and imagination, He created the interactive audio-visual installation work “seven of scale insects”.

In this three-dimensional audio-visual space, the audience can wave their arms and play gorgeous fireworks around the swimming and running dogs until they are attracted to run and jump. In addition, with the help of digital technology, the audience can also leave their own Spring Festival silhouette in the first fireworks light and shadow in 2022.

In the digital era, more and more brands choose to combine algorithms, visualization, VR and other means with Chinese traditional cultural elements to interpret the deep connotation of the brand while promoting the publicity of traditional culture and strengthening the close linkage between consumers and brands.

Taking the “2022 Budweiser Hongyun street activity” as an example, Budweiser chose to match technology in the spring season to add a new year flavor and cheer for the new year. In Hongyun street, a large number of digital technologies are used to present the flavor of the year of the tiger, bringing consumers an immersive experience and rich and interesting interaction. 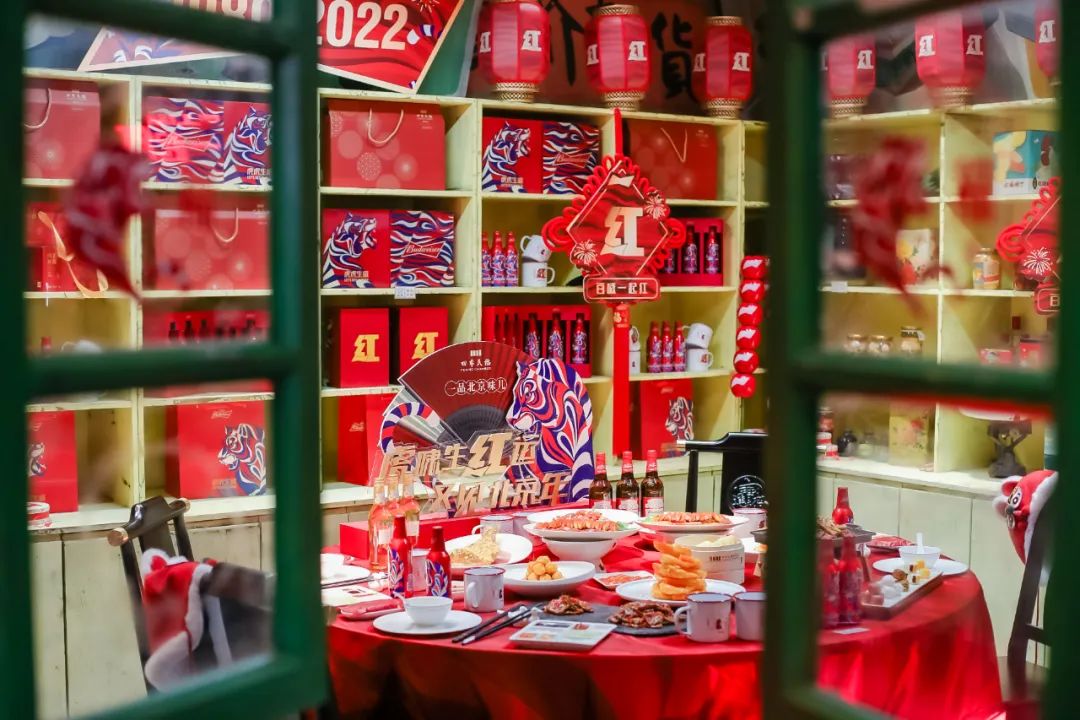 When it comes to the Chinese new year, it is natural to have “red envelopes”. As one of the most familiar elements of the new year for Chinese people, how to trigger the excitement of consumers with red envelopes in an innovative way, build a bridge between young consumers and Chinese traditional culture, and promote a new wave of traditional culture upsurge, which is the problem considered by Budweiser team.

It can be clearly seen that the red envelope appears in front of the participants in a more novel way: scanning the offline device can turn on the online VR red envelope rain, shooting red luck blockbusters, and customizing ar red envelopes.

According to the data provided by Budweiser, during the event, Hongyun street had tens of millions of promotion exposure on various online media platforms. Down to earth, tiktok, a digital innovation marketing aimed at the Spring Festival, consumers have established a more profound and “grounded” connection with Budweiser brand through the deep experience of multiple city line activities and the interaction of online platforms like Xiaohong and jitter.

The whole wall painting takes “tiger” as the creative subject, draws inspiration from traditional culture and uses the creative technique of ink splashing to endow the work with unique and lasting Chinese cultural attributes. At the same time, the magnificent composition gives the audience a strong impact feeling. Consumers who watched the painting process exclaimed “amazing”.

The wall painting of “tiger roaring and prestige” painted by the art master, combined with the limited edition display of Budweiser’s legendary year of the tiger dedicated to the year of the tiger in China, aims to further consolidate Budweiser’s position in the high-end and ultra-high-end beer market through the blessing of double “masters”. 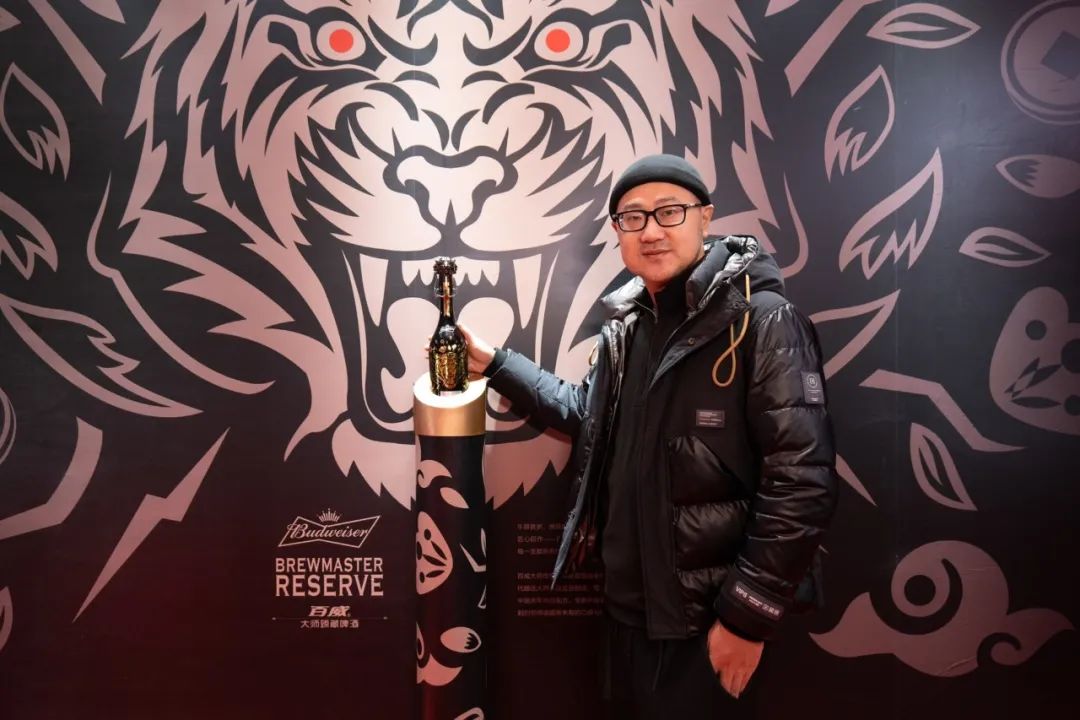 The trend of consumption upgrading calls for differentiated and diversified development of market pattern, and more niche ultra-high-end demand has emerged. In view of the current market situation, Budweiser quickly launched the super high-end beer of “Budweiser master legendary year of the tiger limited edition” this year. 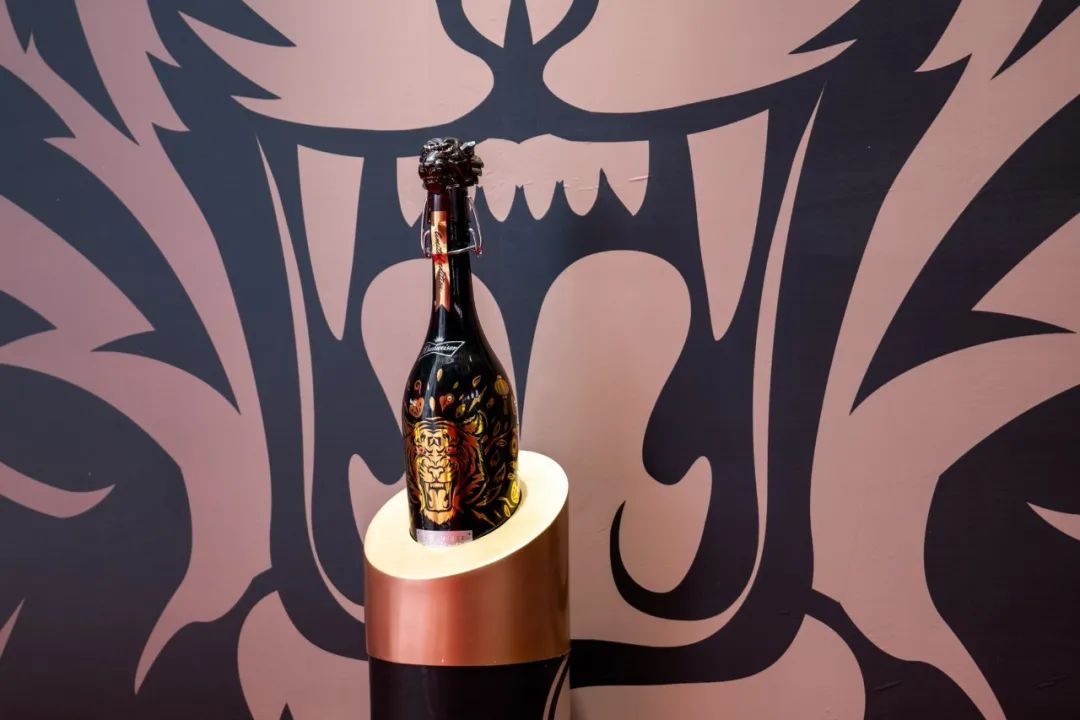 Budweiser master’s legendary year of the tiger limited edition locks in the year of the Tiger Spring Festival with beautiful implication of “Wei”, whose high-end tone is far more than brand positioning, but also lies in the unique “precious” value brought by the product itself, which can create a sense of Spring Festival ceremony for consumers.

How is it different from ordinary beer?

It is understood that the global limit of “Budweiser master legendary tiger year limited edition” is 2400 bottles, which is brewed under the supervision of the fifth generation Brewing Master of George F. Reisch family, the honorary Knight of the global brewing Association. The formula is made of deeply baked burnt malt, through the selection of rich first wort and the brewing process of triple hops, Let the brewing time of up to 23 days lead to various delicate and rich flavors in malt, giving consumers an unusual taste experience.

This year’s Budweiser Hongyun street also hopes to be more skillfully combined with the local annual flavor, and add different annual flavor factors to each city.

According to the relevant person in charge of Budweiser beer, the “2022 Budweiser Hongyun street activity” has been held in more than 70 cities across the country, including Chengdu Lan Kwai Fong, Beijing Heping Fruit Bureau, Shenyang middle street, Tianjin Joy City, Harbin Wanda and other core city business districts. Ordinary consumers can have a close and in-depth experience during the Spring Festival.

In view of consumers’ desire to make a flag in the new year, Budweiser has specially set up “wish Pavilion” and “roaring out of the true self” in the offline activity area as the outlet for release. In addition, there is a huge scarlet letter and studio in the center of the exhibition area, which can provide consumers with a place to take photos and punch in. The red envelope rain, which rises simultaneously online and offline, means that good luck will continue to spread in the new year.

If consumers have the opportunity to walk into Budweiser Hongyun street located in Beijing Heping Fruit Bureau, the strong new year flavor brought by traditional cultural elements will come to their faces: sugar gourd and red lanterns are filled with the New Year atmosphere, retro Hongyun Street will bring you back to fashionable and modern old Beijing in a second, and the Hongyun full dinner will take you to find the Beijing New Year flavor in your memory. 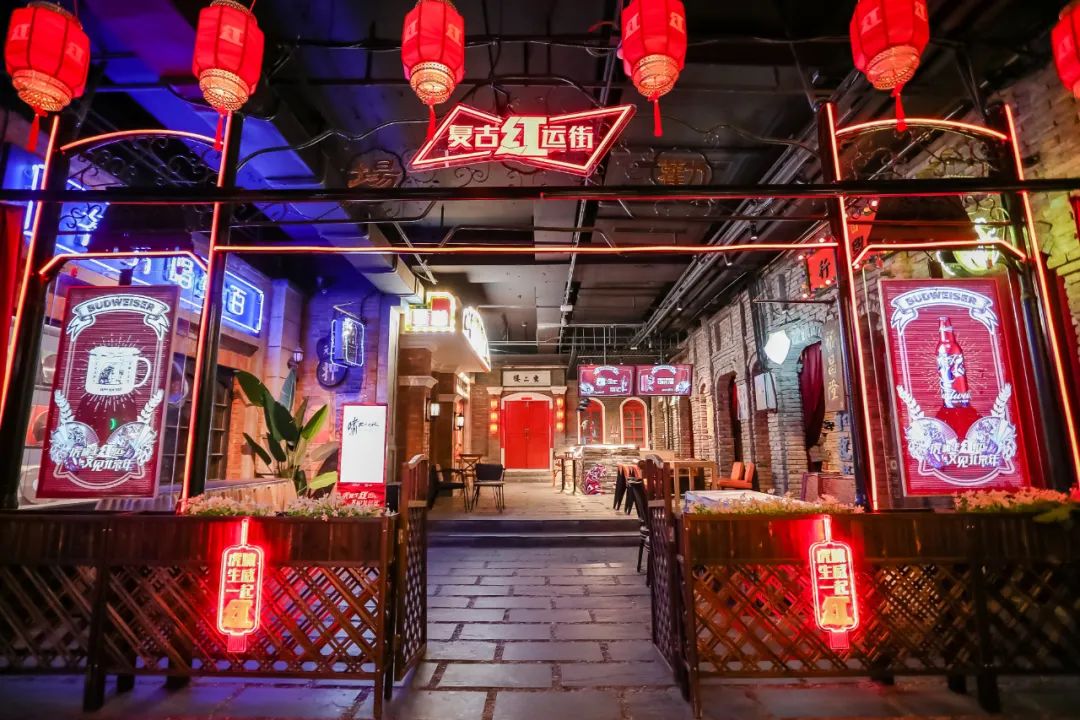 Here, you may encounter the intangible cultural heritage inheritors specially invited by Budweiser, customize an “old craft” for you on site, and share your own lucky “highlight moment” in the circle of friends; If you are lucky enough, you can also enjoy the carefully prepared “red luck new year’s Eve dinner” in the four seasons people’s welfare restaurant. 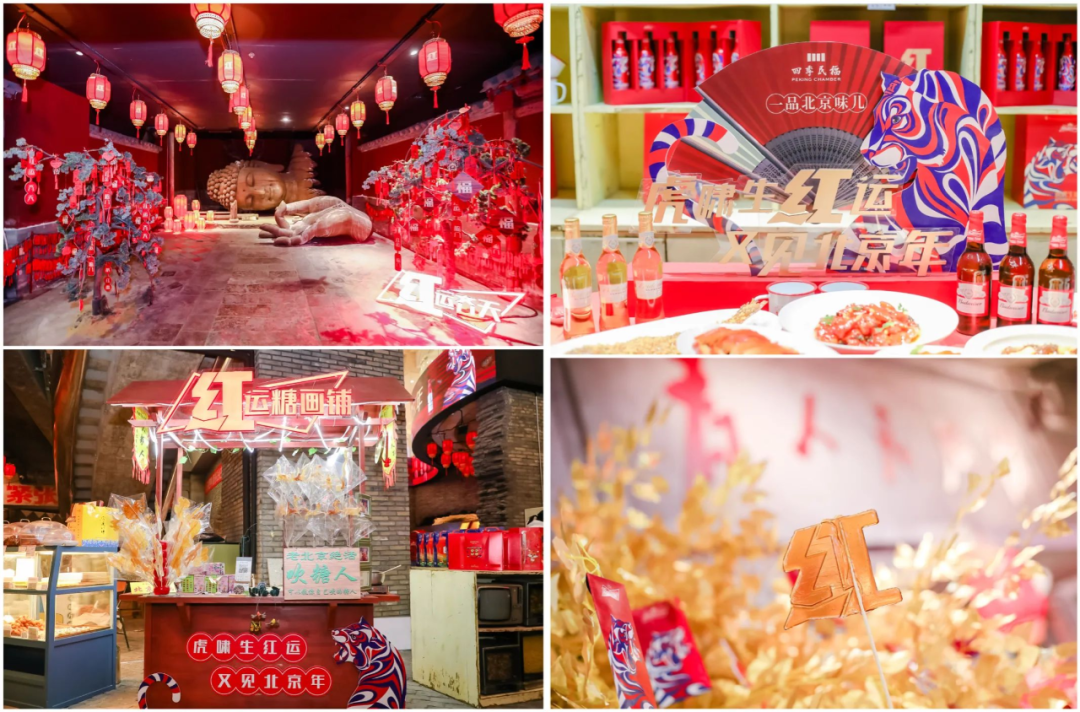 “Nian flavor is not only material richness, but also cultural richness.” Budweiser has a precise grasp of young people’s social preferences, whether through art crossover such as “roaring”, “scale bug 7”, let people scream out their true self and release their young attitude; Or o2o red envelope rain with a sense of science and technology to create a comprehensive, novel and diversified spring festival experience online and offline; Or is it a double “master” blessing, which makes the high-end quality style full of the sense of new year ceremony, and brings more novel and chic flavor.

From the perspective of the industry, it is also hoped that more “new tricks” like Budweiser Hongyun street can emerge, not stick to the tradition, bid farewell to the previous routines, have the courage to try and innovate, and drive more new patterns. All brands can learn from each other and bring more different brand experiences to consumers.

At the same time, Budweiser has made more new attempts at the beginning of the Spring Festival, making a good start for the year of the tiger. As one of the giants in the beer industry, Budweiser is expected to bring more surprises to the industry in the new year.

Pay attention to “xiaoshidai” (wechat: foodinc) “and reply to” Budweiser “to see the wonderful news.