“
there are only closed enterprises, not closed industries.
”
During the Spring Festival, the whole family reunited. With the overwhelming sound of firecrackers, the annual festival swept across the country again, and each family was also performing their own excitement and joy.
At this time, it is usually a pivotal time for the catering industry. The Spring Festival, including the new year’s Eve dinner, is an important guarantee for the annual profits of almost all restaurants, accounting for about 30% of the annual profits. Once you let go of this “fat meat”, the loss will affect the restaurant’s revenue for a whole year. As the diner said, “the Spring Festival will lose half a year”.
Prefabricated dishes fired the first shot in the catering industry this year. Traditional catering enterprises such as Xibei, Meizhou Dongpo and Yunhai cuisine, listed enterprises such as weizhixiang and Qianwei central kitchen, as well as cutting-edge start-ups such as Zhenwei xiaomeiyuan and lixiangguo, as well as fresh e-commerce enterprises such as HEMA, dingdong shopping and daily excellent food, have opened up prefabricated dishes and flocked to the dining tables of Chinese people.
Whether prefabricated dishes can become a habitual choice for the future Chinese New Year is unknown. However, behind the reunion and excitement, not everyone in the restaurant is so happy. 885000 cancellation of catering enterprises behind the catering public phase
China’s catering industry in 2021 can be described as a double heaven of ice and fire. On the one hand, new brands are constantly pouring into the market to drive new entrants, and on the other hand, traditional catering products are constantly shut down or transferred. From the figures, we can see intuitively that according to the enterprise investigation, the number of registered meal enterprises was up to 3167000 in 2021, while the number of cancelled meal enterprises was 885000.
It is worth mentioning that this figure is higher than the outbreak in 2020 and the peak in 2019. According to the data of enterprise investigation, 875000 lifting appliances were cancelled in 2019 and 858000 lifting appliances were cancelled in 2020.
One reason why many people choose to take the initiative to jump in under the difficult situation of survival in the catering industry is driven by the new consumption boom. Just like the popularity of prefabricated dishes this time, the annual registration of enterprises related to prefabricated dishes reached the highest in a decade in 2019 and 2020. By 2021, there were more than 68000 enterprises related to prefabricated dishes in China. Last year, capital rushed to embrace catering. In the first half of the year alone, 333 new consumption projects were born, and 50 billion yuan of hot money rolled in, exceeding the amount of the whole year of 2020.
However, the new consumption of this car has spawned one eye-catching new brand after another, and the news of the collapse of that car’s traditional catering has come again and again.
At the end of November, the last xuliushan franchise store in Yau Tong was closed. A few days ago, half an hour before the store opened, dozens of citizens lined up outside the store to patronize. Perhaps they knew that Xu Liushan was about to close down. Many citizens came specially to buy dessert and bid farewell to this dessert shop full of childhood memories.
Xu Liushan started his career in Hong Kong and once laid the foundation for him to become the “king of dessert” in Hong Kong by relying on his ace product “Mango misilao”. The first store opened by Xu Liushan in Shanghai in 2004 was K11 mall on Huaihai middle road. At that time, the long queue at the door of Xu Liushan was no less than today’s happy tea, Naixue tea and tea color. A Hong Kong person said, “many old shops in Hong Kong have closed in the early days. Like many teahouses, everyone has only memories left.”.
The king of jinniujiao in Changsha also carries the memory of a city but eventually goes bankrupt. Before the Spring Festival last year, jinniujiaowang Chinese and western restaurant suddenly closed all its stores in Hunan, which caught many consumers off guard.
Ms. Liu, a citizen, said that when she was a student more than ten years ago, the king of Taurus horn was the first choice when she needed “luxury”. The special assorted mushrooms and fish heads with chopped peppers were impressive, but she didn’t expect to close down after driving for so many years. She sighed, “I wanted to have a meal during the new year”. 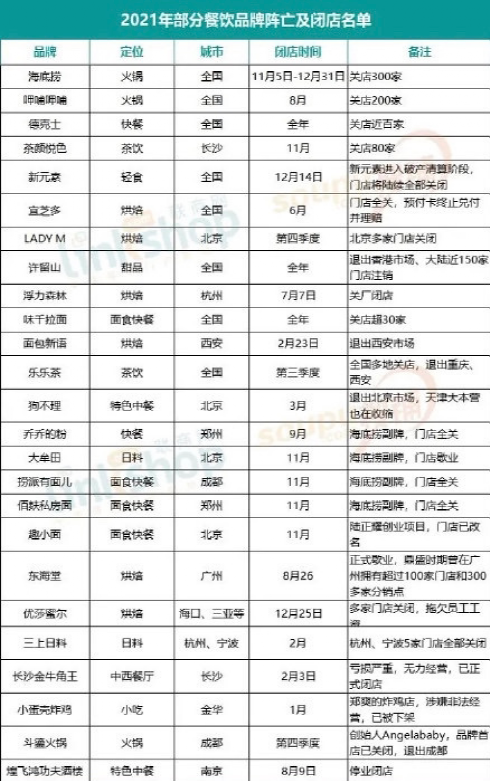 In the death list of catering brands in 2021, we can see that there are many well-known old brand stores that have been open for more than ten years, and industry giants such as Haidilao, Xiabu, Xiabu and Dexter have also begun to close their stores on a large scale. In addition, hot-pot/" 22375 rel="nofollow" target="_self">hot pot shops and milk tea shops in many cities are also the “hardest hit areas” for enterprises to cancel. According to data, 16000 hot-pot/" 22375 rel="nofollow" target="_self">hot pot shops closed in the first half of the year alone, and even the number of new registration of local hot-pot/" 22375 rel="nofollow" target="_self">hot pot shops in Chengdu has decreased significantly.
The domestic food and beverage market has even affected KFC, an enduring fast-food giant. A netizen said on his microblog that he didn’t expect KFC to close down, and it was in large shopping malls with a large flow of local people. Since the outbreak, shopping malls have not been as lively as before, and a large area of catering stores around KFC has been empty. At the same time, in the center of a fourth tier city, KFC, which has been open for nearly seven or eight years, even posted a notice of “closing the store soon”.

Restaurant “blood loss”,
Second hand catering equipment “earned”
Changing from a catering worker to a second-hand catering equipment recycler is the helpless choice of Mr. Liu from Chengdu after his entrepreneurial failure. Before the outbreak, he opened more than 10 rice noodle stores in suburban counties around Chengdu. By 2020, he encountered the epidemic and was unsustainable. Finally, he reduced the number of stores to about three. Last year, he felt that the catering industry was even more difficult than that in 2020, especially after switching to second-hand catering recycling, he often saw that the stores closed after one or two months, mainly hot-pot/" 22375 rel="nofollow" target="_self">hot pot stores.
But the more restaurants shut down, the more money he makes from second-hand recycling. After the end of the epidemic in Chengdu in early November, in the three days after returning to work, the company received equipment from 20 catering stores, and the 1000 square meter warehouse rented in the same month was quickly filled. Among them, 9 chain stores, 2 large hotpot shops with thousands of square meters, 3 Chinese restaurants, 3 small noodle shops, 2 milk tea shops and 1 bar were collected.
Mr. Liu said that at first, the company recycled more than 10 restaurants a month. At present, it can reach about 30 restaurants a month, but “the more you collect, the heavier your heart is”. As a person who came here, he can imagine that these catering people are really not easy.
Jiang Ming, who is also engaged in recycling second-hand catering equipment, has been busy every day for the past two years. He is busy smashing walls and dismantling stores during the day. He is often awakened by phone at night. He is either urged to ask whether there is a steamer or whether there is an ice planer… Many newly collected catering equipment have been sold without entering the warehouse. 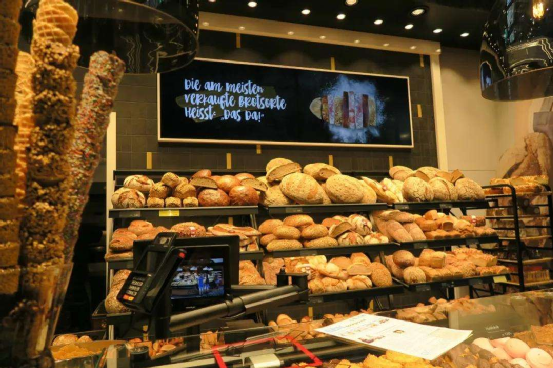 According to Jiang Ming, the most restaurants he has demolished are milk tea shops and hot-pot/" 22375 rel="nofollow" target="_self">hot pot shops. In the whole hot-pot/" 22375 rel="nofollow" target="_self">hot pot stores, individual stores do not have the advantages of chain stores such as brand and supply chain, and the survival rate is low. A considerable number of hot-pot/" 22375 rel="nofollow" target="_self">hot pot enterprises can not live for five years, and about 30% will close down within two years.
Since the resumption of work in all walks of life in 2020, there have been a continuous number of businesses making reservations for the recycling of catering equipment. Jiang Ming has to see seven or eight stores a day and demolished five stores in the busiest day. Their company’s business is only for the equipment acquisition of new catering stores that have opened for a short time. These stores are often willing to spend money on equipment. Because the time is short, the purchased equipment can easily find a home and earn a lot of middle price difference.
In the past two years, Jiang Ming has seen too many reluctant diners leave the catering industry in tears. A baking customer paid 300000 for the equipment, and we offered 80000. He felt that the price was too low, and turned many channels to sell it. Later, he found that we gave the highest price.
Of course, the activity of the second-hand catering equipment market does not mean that the catering industry is depressed, but that the industry is upgrading faster and faster. The “closing tide” after the epidemic has further magnified the problems of large investment, low gross profit and slow growth in the catering industry, but with the influx of new stores, the corresponding “opening tide” may also be a matter of time.
A restaurant who has been struggling in the industry for nearly a decade said, “there are only closed enterprises, not closed industries”. Many people are enthusiastic about catering. He is waiting for the arrival of spring.
Author: General Manager Dao; Source: Dao Zong Youli (ID: daotmt), reprint has been authorized. Reprint authorization and media business cooperation: Amy (wechat: 13701559246); Foodaily fbic & expo2022] foodaily daily food has joined hands with the world’s top business and industrial partners to create foodaily ✕ 0. With the theme, it has passed the three-day new consumption innovation test ground ✕ global innovation product stage ✕ food Developer Conference ✕ top product social circle, running through the upstream and downstream of the food industry chain and linking the whole scene of new consumption business, Take further steps towards the end of the new food era, once again explain the future of China’s new food consumption, 360 ° showing brand ecology.,