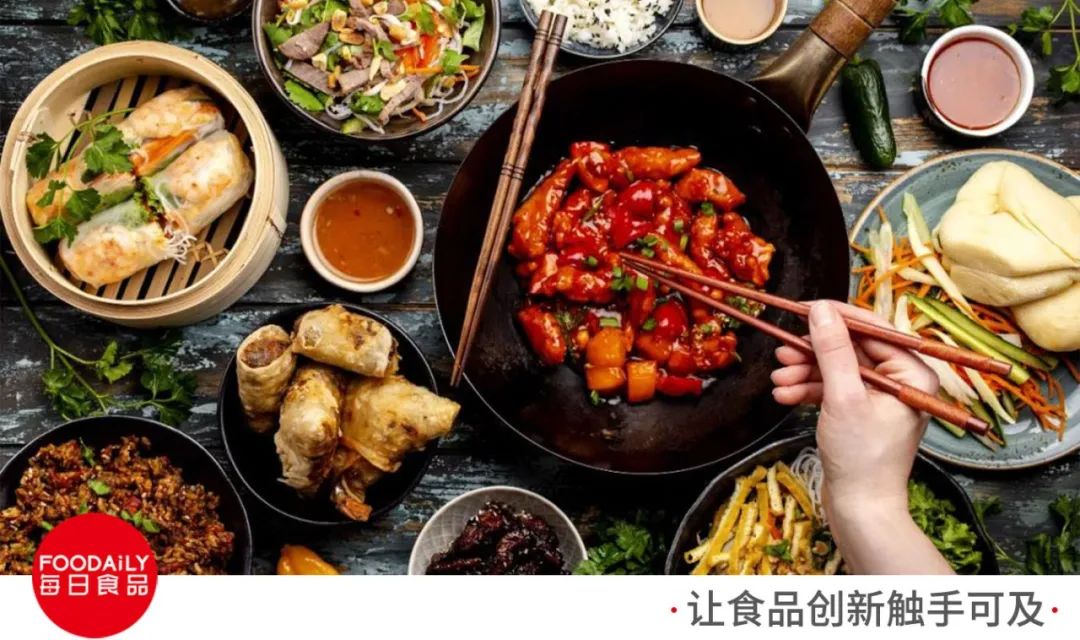 “
the era of inner volume in the prefabricated vegetable industry is undoubtedly accelerating.
”

You can easily make a delicious dish in a few minutes. Do you envy such “super power”?
as a “delicious” Chinese nation, although the eight major cuisines of hot cooking oil have brought people a feast of taste buds, it also makes Chinese food culture an unbearable “priority” for many people – Chinese people pay attention to “pot spirit” and the freshness of food materials, various seasoning methods and all rely on experience. Everyone has a set of mature cooking secrets.
but when young people are frantically 996 busy with their time, the complicated process of Chinese food has also become an obstacle for them to step into the kitchen. Now, the magic of prefabricated dishes seems to dispel the threshold for them to enter the kitchen.
the Spring Festival is approaching, and the prefabricated dishes have ushered in the peak sales season. “Preparing several prefabricated dishes can save time for preparing new year’s Eve dinner” and “want to show off in front of relatives by prefabricated dishes during the new year” have become important reasons for people to choose prefabricated dishes.
but doubts follow. Does industrialized food material processing pose a challenge to Chinese traditional catering culture? How to ensure the taste and food safety of prefabricated dishes? Will prefabricated dishes make young people lazier?
when dishes with complete colors, flavors and flavors are served on the table, you may not know whether they are processed from semi-finished products. But under the table, the Jianghu of prefabricated vegetables has already been in a turbulent tide.

why “turn red” for prefabricated dishes?

the Spring Festival holiday is approaching, coupled with the catalysis of the lazy economy, the concept stocks related to prefabricated vegetables have already bucked the trend and raised the limit, which has brought rare good news to the weak secondary market since 2021.
since January 12, 2022, the prefabricated dishes in Shanghai and Shenzhen stock markets have risen sharply for three consecutive trading days. On January 14, 7 of the 38 constituent stocks in the prefabricated vegetable sector rose the limit, including Guolian aquatic products, Fucheng shares, delis, Haixin food, etc., many of which have risen the limit for several consecutive days.
among them, Guolian aquatic products, which is mainly engaged in aquaculture and processing of aquatic products, has the highest increase. Recently, it has disclosed the news of R & D of prefabricated vegetable products with HEMA fresh food, and will make use of HEMA channel to develop C-end.
in fact, prefabricated dishes are not new. Similar product forms have appeared for 20 years.
prefabricated dishes can generally be divided into four categories: open bag ready to eat food, instant hot food, instant prepared food and instant cooked food. The first two are represented by ham sausage, self heating hot-pot/" 22375 rel="nofollow" target="_self">hot pot and other products, while the latter two refer to processed and assembled ingredients and semi-finished foods with seasoning bags that can be cooked directly in the pot. 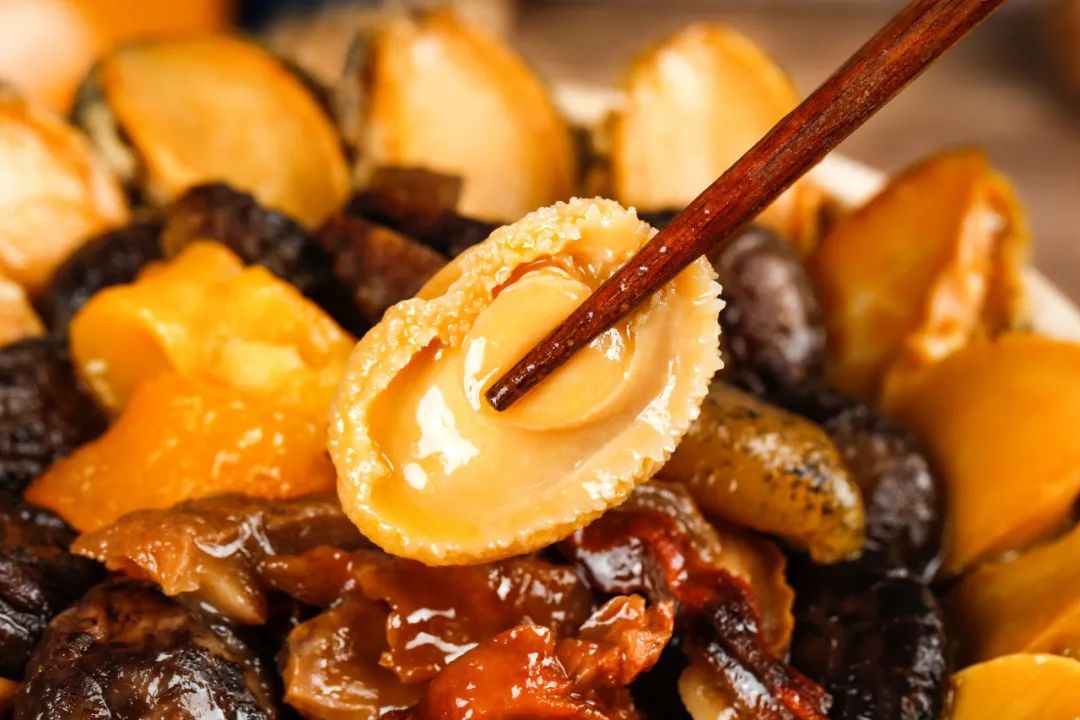 map / photo network. Based on VRF protocol,
goes from preliminary processing to deep processing. The categories of prefabricated dishes also go deep into consumers’ catering recipes step by step with the difficulty of processing.
more consumers first came into contact with prefabricated dishes, mostly from frozen food, but due to the Chinese people’s persistence in food cooking, semi-finished dishes have not become the mainstream on the Chinese table.
in contrast, in order to save cost and time, a large number of chain catering enterprises have gradually emerged in demand for complex prefabricated dishes. The food materials are pre processed by the central kitchen and then distributed to the store for the last process, which has become a new choice for catering enterprises; On the other hand, behind the rise of China’s takeout market are a large number of small and medium-sized catering brands that are responsible for their own profits and losses. In order to improve the efficiency of meal delivery, they also feed a large number of takeout food package production factories.
according to a number of insiders, in Japan, which was the first to rise prefabricated food, its industry penetration rate is as high as 60%, while China is far from reaching this figure. In terms of the current prefabricated food industry, more than 80% of the demand basically comes from b-end catering enterprises, while at present, more than 60% of domestic catering enterprises use the central kitchen to process prefabricated food.
has a high degree of acceptance compared with b-end catering enterprises, while C-end consumers have been “lack of interest” in prefabricated dishes.
a “negative” case is that Xibei youmian village, a chain catering enterprise, began to set foot in prefabricated dishes in 2020, but its launch of “Jia Guolong Kung Fu cuisine” has aroused no small doubt. In the eyes of consumers, you can use prefabricated dishes to process and serve in the back kitchen, but at least don’t let me know – in the eyes of some people in the industry, Jia Guolong, founder of Xibei catering, is equivalent to tearing down the “fig leaf” of the catering industry.
and the real entry of prefabricated vegetables into the C-end consumer market is related to the chain reaction caused by the epidemic.
as early as the beginning of 2020, many catering enterprises have tried to sell pre purchased ingredients and semi processed foods in different channels in order to combat the epidemic. In the past 2021, the repeated epidemics in various places also indirectly led to the sharp decline of catering stock prices. It is urgent to find the “second growth curve” outside the hall food.
in addition, in the past two years, under the initiatives of home Chinese New Year and local Chinese new year, prefabricated dishes once became a life-saving straw to save lonely and wandering youth and set off the sense of Spring Festival ceremony, which really triggered the “turn red” switch of prefabricated dishes.
in January 2022, tongue tip technology officially launched the prefabricated food project “tongue tip workshop”, which is mainly engaged in prefabricated ingredients, quick cooking dishes and other categories. Lu Zhengyao served as the chairman of the strategy committee of this enterprise, which has attracted much attention in the industry. Li Yingbo, its rotating CEO, believes that there is a deeper underlying logic in the rise of prefabricated dishes.
first of all, prefabricated dishes have high penetration and market acceptance in Japan, Europe and the United States, and have bright prospects in China; Secondly, the epidemic has accelerated the trend of prefabricated dishes to the dining table of Chinese consumers; More importantly, the iteration of freezing and cold chain technology has provided prefabricated dishes with technology and market base, making them quickly become the outlet for capital pursuit.
“prefabricated food is a rigid demand – People’s demand for health will slowly pull ‘cooking at home’ to a more and more core dimension and position.” He said to the “front line of entrepreneurship”.
day eye survey data show that up to now, there are more than 68000 enterprises with names or business scope including “quick-frozen, prefabricated vegetables, prefabricated food, semi-finished food, ready to eat and clean vegetables”. In 2020 alone, the number of relevant registered enterprises was close to 13000.

/ tianyancha
in addition, according to the prediction of Shanxi securities, the space scale of prefabricated vegetables in China is expected to reach 340 billion yuan in 2021, with a year-on-year increase of 18%. In the next 3-5 years, China’s Prefabricated food industry is expected to become the next trillion catering market.
and behind this expected trillion market are targeted consumers.
“the consumption needs of the target users of prefabricated dishes are different.” Li Yingbo pointed out that the prefabricated products of the tongue tip workshop include washed and cut primary products, basic pickled food and deep-processing semi-finished products.
“for people who cook at home for a long time, their pain point is that they spend 60% of their time dealing with dishes and only 10% of their time cooking. These people prefer to choose prefabricated ingredients after washing and cutting.” He added. 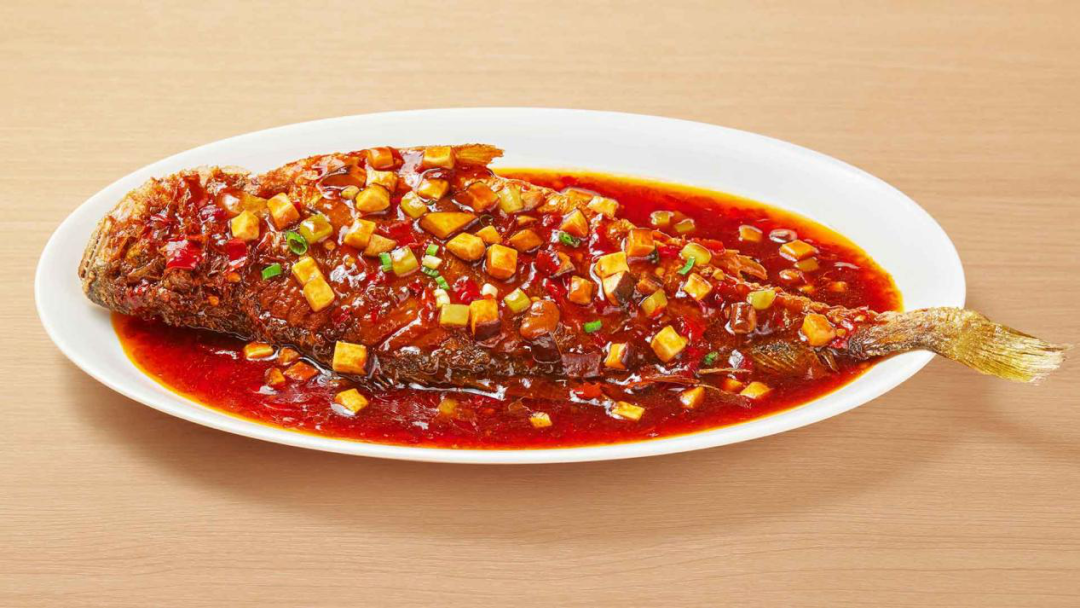 fighting on the table 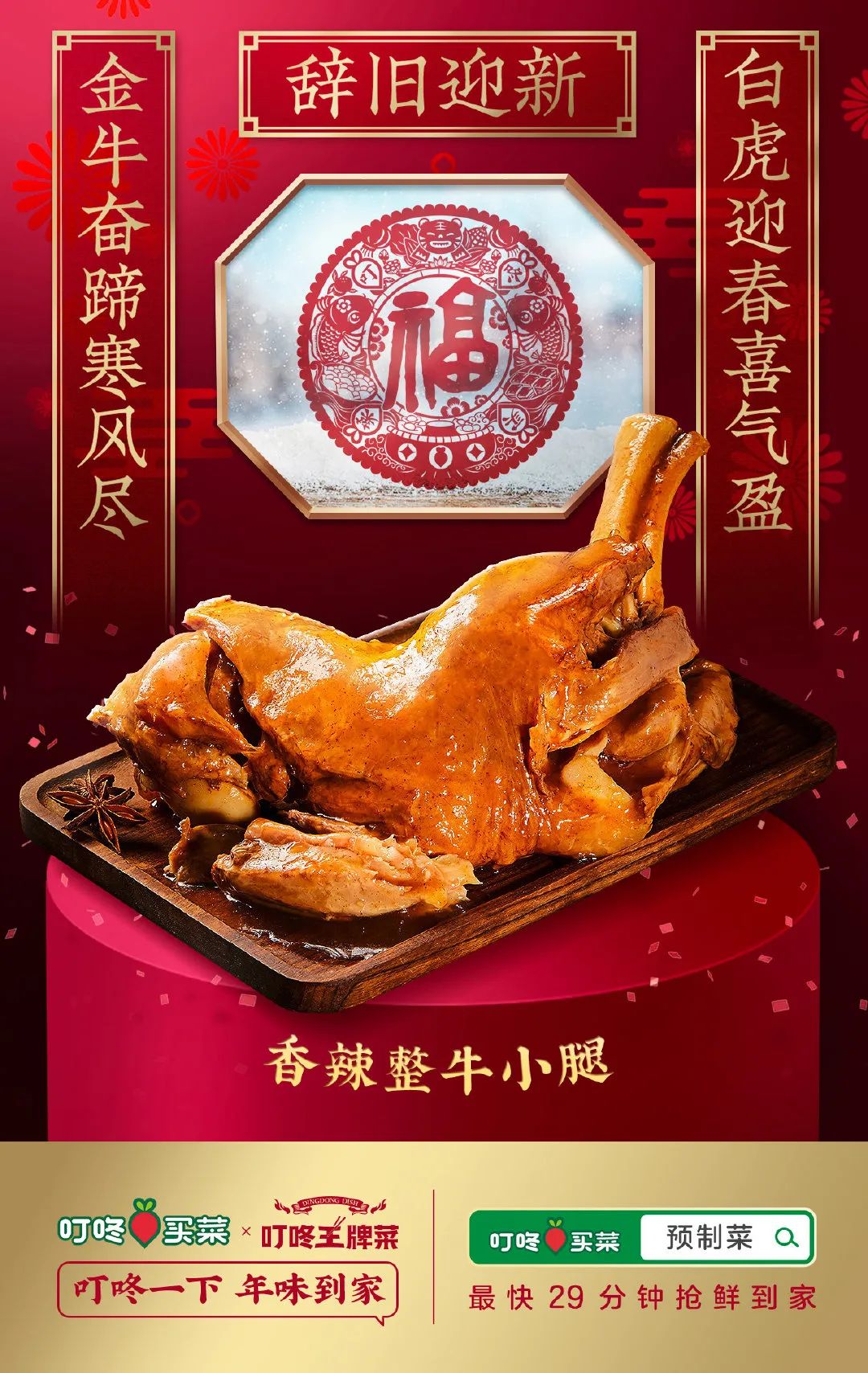 / from dingdong shopping official
in Guolian aquatic products Taobao flagship store, there are many “worry free new year’s Eve dinner sets”, including “flavor roast fish”, “crystal shrimp dumplings” and other semi-finished dishes; In the flagship Taobao store of “Zhenwei xiaomeiyuan”, a prefabricated dish brand that has just obtained the B + round of financing, its prefabricated New Year’s Eve dinner gift box “perfect as a tiger” contains 11 prefabricated dishes, and the fresh taste price of the new product is 288 yuan.
if you search “prefabricated dishes” on the home page of Taobao, the first few pages are mainly prefabricated New Year gift boxes of catering brands such as Taier pickled vegetables, Guangzhou Restaurant, Dadong and Meizhou Dongpo. 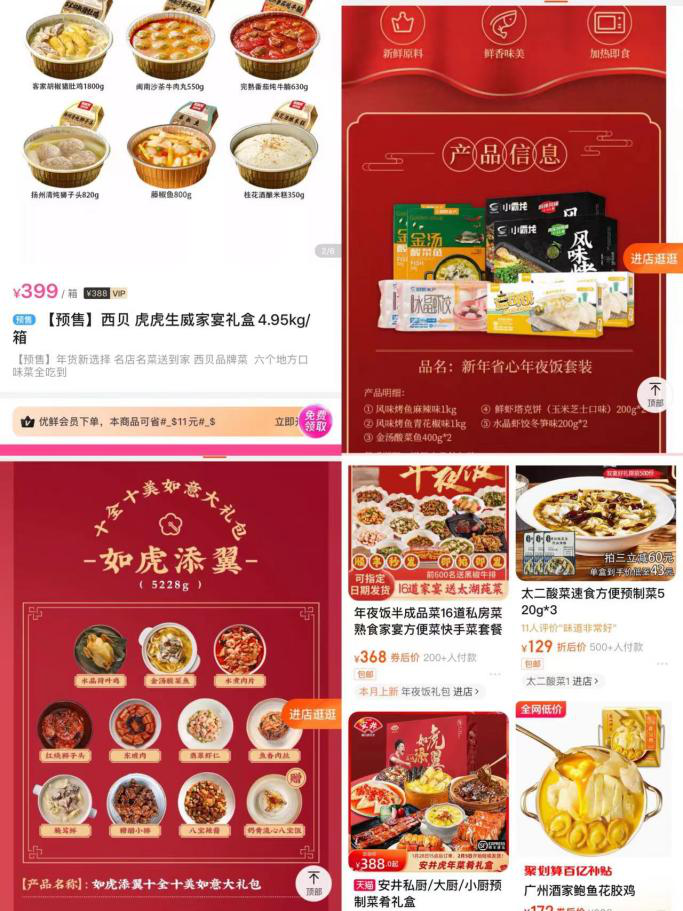 / the prefabricated dishes of major brands
are not only that, but there are many cross-border players on the market. For example, at the end of 2021, Haier’s Internet of food prefabricated New Year’s Eve dinner was officially launched on the alpha fish platform (prefabricated Internet of things platform), and launched four sets and 20 prefabricated cuisines, which can be cooked in a steam oven for a few minutes. 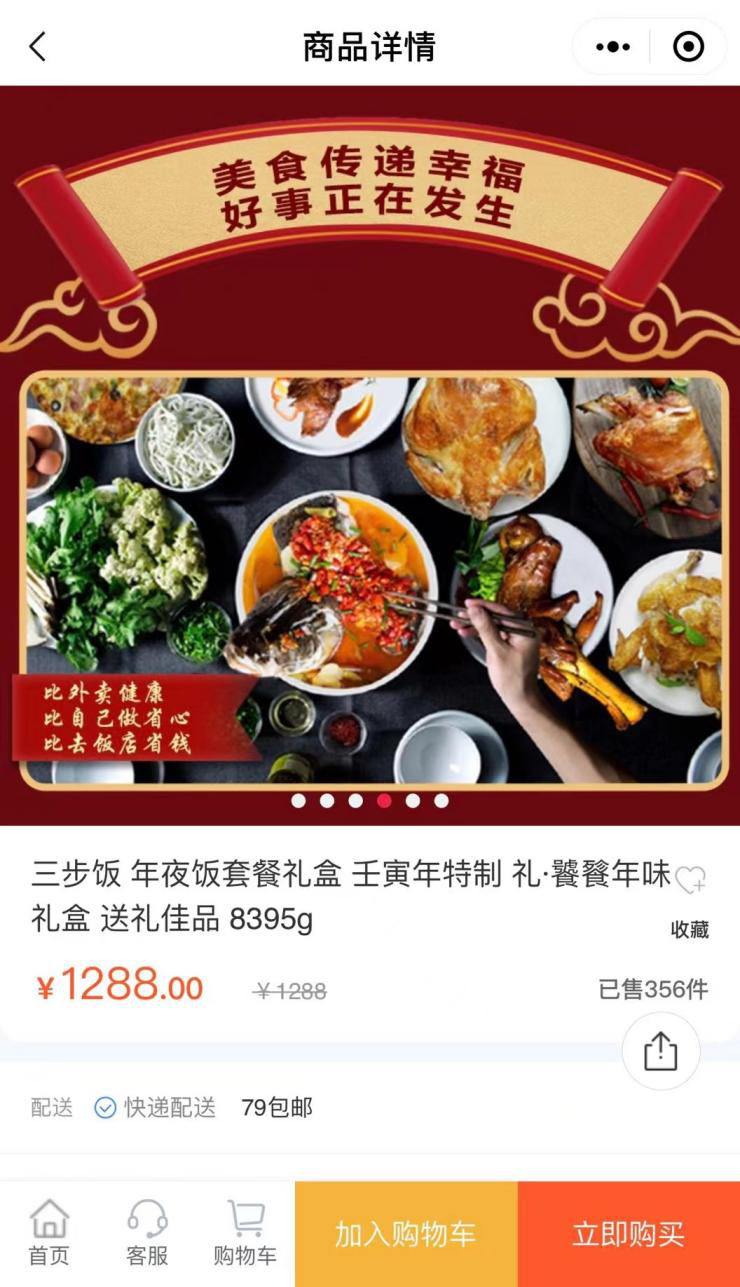 figure / gift box of big meal package on alpha fish platform
it is not difficult to find that although there are many players entering the category of prefabricated dishes, they can be mainly divided into four categories: traditional semi-finished product processing enterprises, traditional chain restaurant enterprises, fresh food platforms and new retail brands.
traditional semi-finished product processing enterprises are represented by weizhixiang and Guolian aquatic products. The former has more than 200 SKUs, while the latter focuses on processing semi-finished aquatic products. This year, it has extended olive branches to HEMA fresh; The chain restaurant enterprises themselves rely on the advantages of stores and supply chain, and the force C end has more brand advantages, such as Guangzhou Restaurant and Xibei.
dingdong has been on the market for less than one year. The cost of prefabricated dishes is low and the gross profit is high. It can become an important business supplement for fresh food platforms to improve their profitability; More new consumer brands that take the asset light route, such as “Zhenwei xiaomeiyuan”, emerge one after another, and marketing first seems to be its consistent style.
in addition, the b-end chain Chinese restaurant has long been the world of prefabricated dishes. According to insiders, its prefabrication rate and semi-finished product rate can almost reach 50% – 60%.
in consideration of cost, most of these prefabricated ingredients come from the brand’s central kitchen. The dishes are cleaned and processed in the central kitchen, packaged and delivered to catering stores by means of freezing or vacuum, and then the last few processes are completed. The advantage of
central kitchen is that it can be produced and distributed according to the needs of the restaurant, such as one distribution a day, which is different from the takeout package with longer shelf life. Firstly, it ensures the freshness of ingredients; The second is to reduce the loss of food materials; More importantly, the restaurant can reduce the operation space and time of the back kitchen, realize the standardization and process of catering processing, and greatly reduce the procurement and processing costs.
has more procurement advantages in supply chain and consumption, so for b-end meal enterprises, the cost of prefabricated dishes is also lower than that of on-site production. Tongue tip technology also revealed to the “forefront of entrepreneurship” that the gross profit margin of its prefabricated vegetable products is about 50%.
at the retail level, the prefabricated dishes that consumers can buy seem to be more cost-effective than hall food.
according to Ding Dong’s previous disclosure, the price of its prefabricated dishes focuses on about 20-50 yuan, while the high-end line is 60-100 yuan. Its pricing principle is to give a 60-70% discount on the basis of the restaurant price. The price of home-made dishes in the tongue tip workshop is basically between 10-25 yuan, which is more cost-effective.

is rolled in when it is born?