Just now, Coca Cola, the world’s largest beverage company, released its performance in the fourth quarter and the whole year of 2021. Both its annual revenue and sales exceeded the level of 2019 before the epidemic, while the Chinese market is still the “top student” with bright performance.

According to the financial report read by the snack generation, Coca Cola’s net income increased by 10% to US $9.46 billion in the fourth quarter, exceeding the market expectation of US $8.94 billion; Earnings per share was $0.45, higher than the market expected $0.41; The global single box sales increased by 9% year-on-year, and the single box sales in the Asia Pacific market increased by 11% year-on-year, mainly due to the strong growth in China, India and the Philippines.

Some products of Coca Cola China

“Although 2021 is still full of uncertainties, the whole Coca Cola system has performed well in this year, showing strong toughness and high flexibility.” James Quincey, chairman and CEO of Coca Cola, said today that under the guidance of its core strategy, the company has truly achieved a “strong rise”.

Next, xiaoshidai will take you to “focus” and “listen” to the live news released by the senior management of Coca Cola headquarters at the just concluded performance meeting with Wall Street analysts.

Let’s focus on the performance of the Chinese market.

“The Chinese market grew strongly in the last quarter. In particular, Zero sugar Coca Cola doubled compared with the fourth quarter of 2019. Revenue improvement management and e-commerce business also contributed to growth in China.” Zhan kunjie mentioned it at the performance meeting today.

According to the financial report read by xiaoshidai, when talking about the performance of the Asia Pacific region, the company mentioned that the single box sales increased by 11% in this quarter, achieving a low single digit growth compared with 2019. “The growth was driven by China, India and the Philippines, but was partially offset by the impact of the epidemic in Australia. The growth was led by Coca Cola branded products and flavored soda products.”

It is worth noting that Coca Cola pointed out that in the fourth quarter, the sales outside the home exceeded the level in 2019 for the first time, and the strong momentum of home consumption channels continued. “Despite the uneven progress of the recovery around the world, we are combining the power of scale with the deep knowledge needed to win locally and continue to invest in a targeted way before the recovery.” The company said. 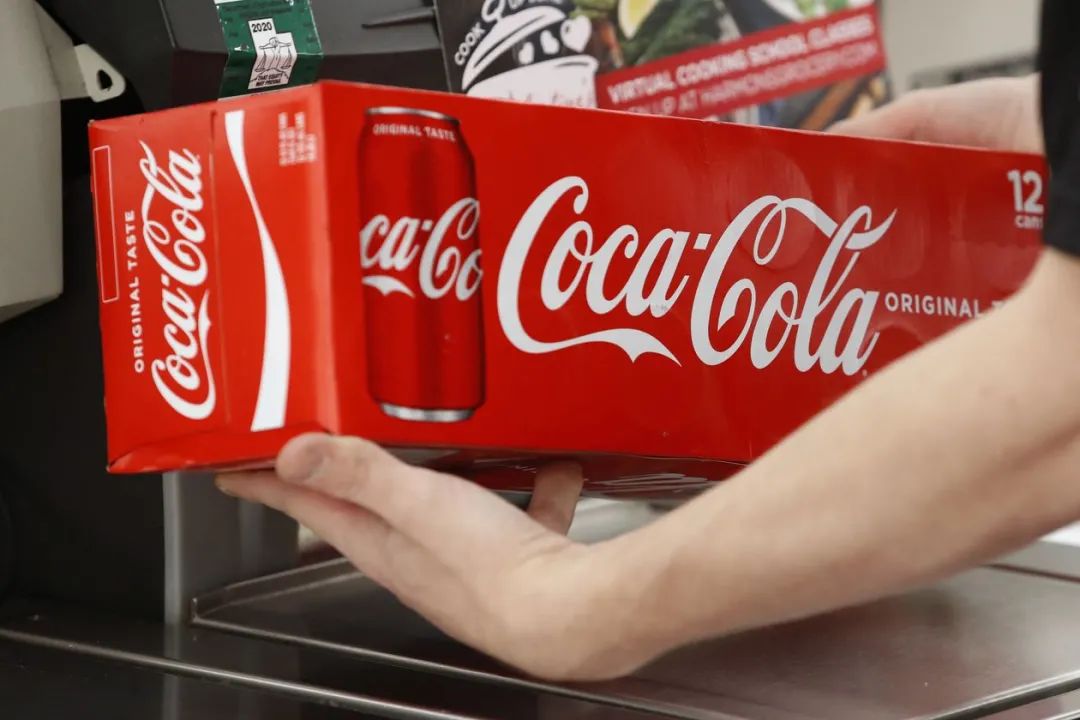 “Gaining more market share was our main goal last year.” Zhan kunjie said at the performance meeting today, “the performance released today shows how we can recover strongly from the epidemic.”

Coca Cola said that in 2021, the company has always maintained a “steady and upward” business performance in a highly challenging market environment. Behind this is Coca Cola’s consistent pursuit of long-term ism in all markets, and its continuous cultivation of internal skills in brand building, supply chain digital transformation and promoting sustainable development, so as to lay a solid foundation for the long-term and stable development of its business. 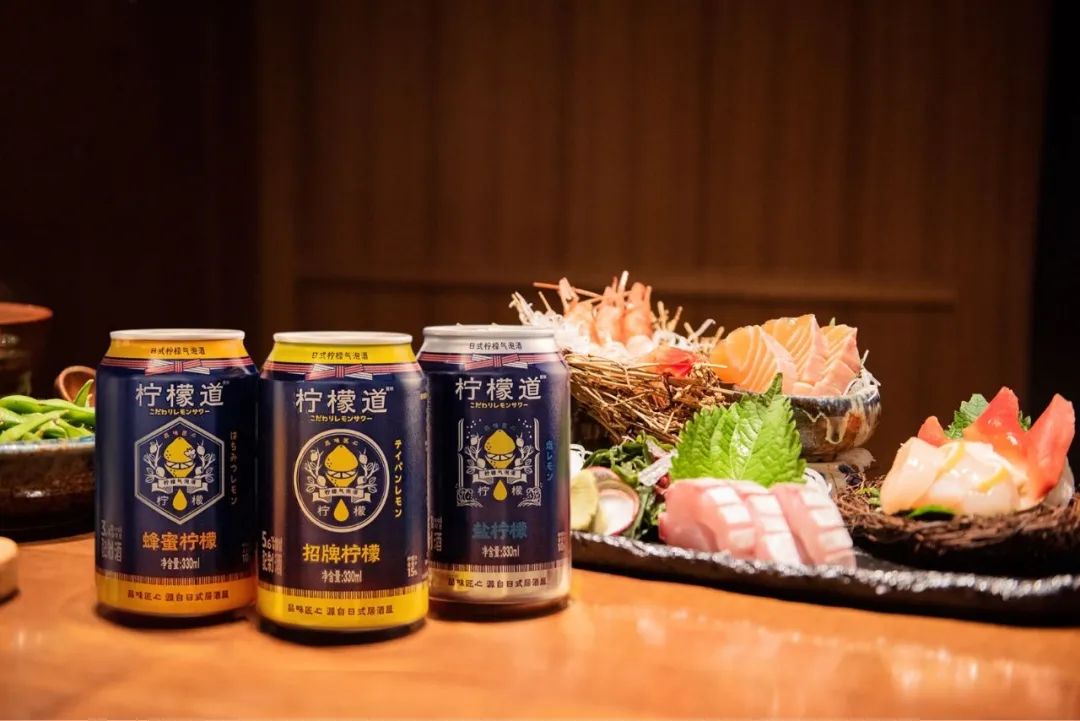 On the other hand, the company is also optimizing its existing brands and product portfolio and adding new tuyeres.

For example, the snack generation introduced that in August last year, Coca Cola launched the “Zhibai flagship store” specialized in selling plant-based drinks on the e-commerce platform, selling brands such as coarse grain king, sunshine everywhere and adez, covering bean based, coconut based, oat based and other categories.

Coca Cola China has previously “spoiled” the snack generation. In 2022, coarse grain king will focus on developing coconut based and consolidating oat based series, and further focus on high-value products in some market segments. “It will be introduced to the market after the Spring Festival in 2022.”

At the same time of product innovation, Coca Cola China continues to increase its supply chain and upgrade its production capacity and storage.

Xiaoshidai learned that COFCO Coca Cola’s central planning center was officially launched in the fourth quarter. It is reported that it will carry out overall planning from five aspects: structure, personnel, process, system and performance, improve the utilization rate of production line, improve the satisfaction of business demand and the flexibility to cope with fluctuations. In addition, in 2021, COFCO Coca Cola launched the “cola go” platform to realize the digitization of the whole order process. 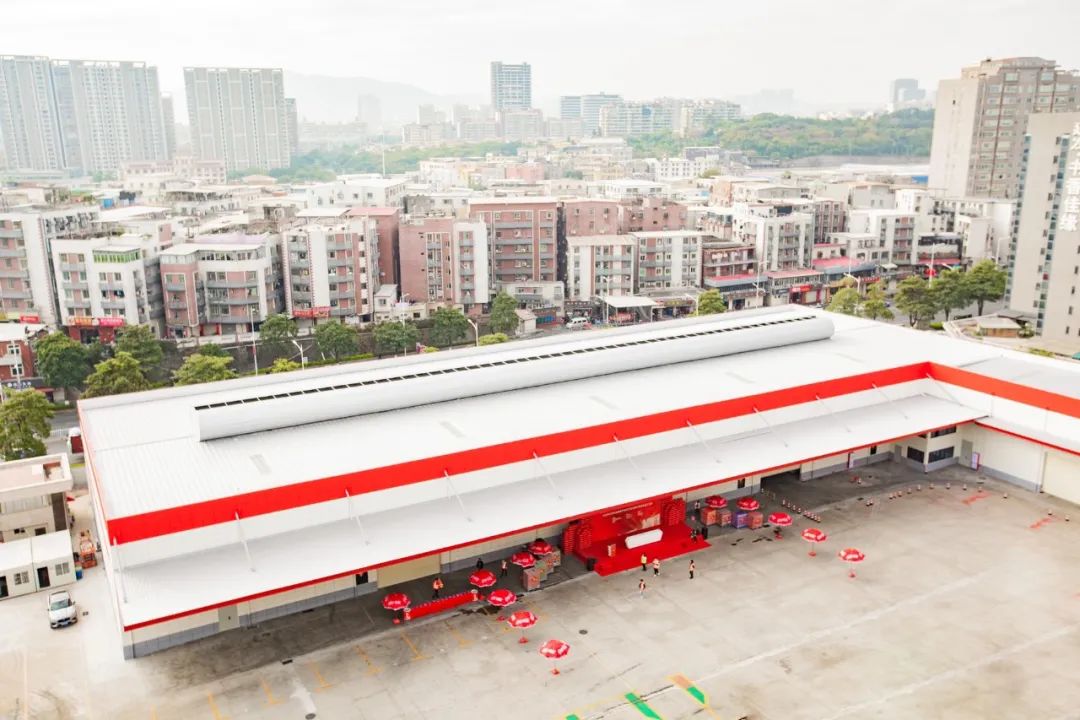 Coca Cola’s other big bottling partner in China, Swire cola, has also made frequent moves. At the beginning of the new year in 2022, Swire Cola announced that it would invest 1.25 billion yuan to build an intelligent and green production base including 12 beverage production lines, production plants, three-dimensional warehouses and supporting facilities in Guangdong. This investment has set a new record for the individual investment of Swire Coca Cola.

The company said that it expects the growth rate of organic revenue in 2022 to be in the range of 7% – 8%. It is expected that commodity price inflation will have an adverse impact on the median single digit percentage of commodity sales cost. It is expected that earnings per share will increase by 5% – 6% compared with us $2.32 in 2021.

“Last year, the measures taken by Coca Cola in the epidemic showed the flexibility of the company. Looking forward to 2022, macro factors, including consumer confidence and supply chain, will have an impact on the performance, but we are confident that we can achieve the performance guidelines released today.” Zhan kunjie said at the meeting today. “At present, the market environment is still full of changes. We hope to continue to promote business growth and maximize returns based on the good momentum in 2021.” Zhan kunjie said.

For example, xiaoshidai noticed that during the peak sales season of this year’s Spring Festival, the company’s flagship brand Coca Cola sold the year of the tiger pot of the Spring Festival Limited zodiac in China, integrated Chinese elements such as traditional New Year pictures and clip art, and launched a series of creative marketing activities such as animated films of the year of the tiger and immersive interactive games, so as to strengthen Coca Cola as a symbol of joy and reunion, Enhance emotional resonance with local consumers. 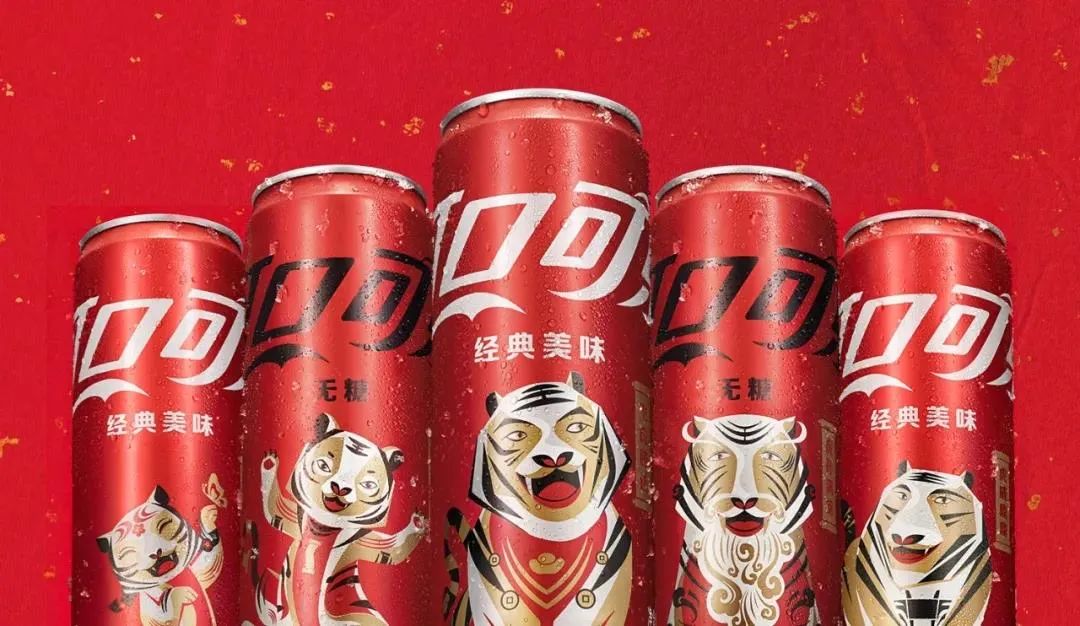 It is worth noting that this spring festival marketing is the successful landing of Coca Cola’s new brand concept in the Chinese market. Xiaoshidai introduced that at the end of September 2021, Coca Cola released a new brand concept “real magic” and launched a new presentation form of its classic logo – “hug” logo.

At present, Coca Cola, as the official partner of the Olympic Games, is also “eye-catching” in a way with a sense of future in the world-renowned Beijing 2022 Winter Olympic Games. 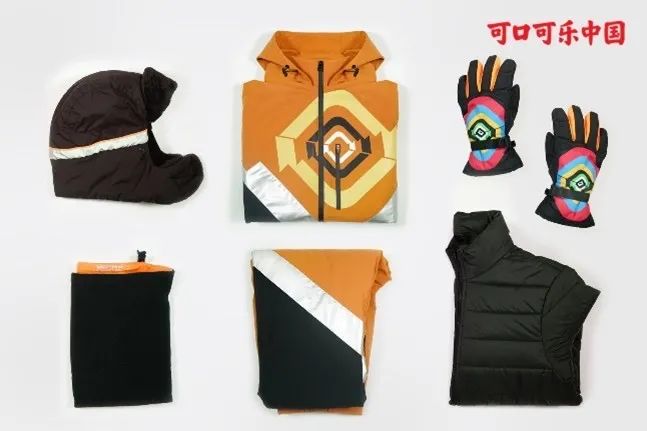 For example, in the fourth quarter, Coca Cola China announced that it would provide more than 4500 sets of overalls made of RPET (recycled beverage bottles) to the waste removal teams at all venues of the 2022 Winter Olympic Games in Beijing. In terms of design, the company also skillfully integrates the word “back” into work clothes, echoing the “recycle me” sustainable packaging logo on Coca Cola packaging bottles, and encouraging more people to realize the value of recycling beverage bottles. 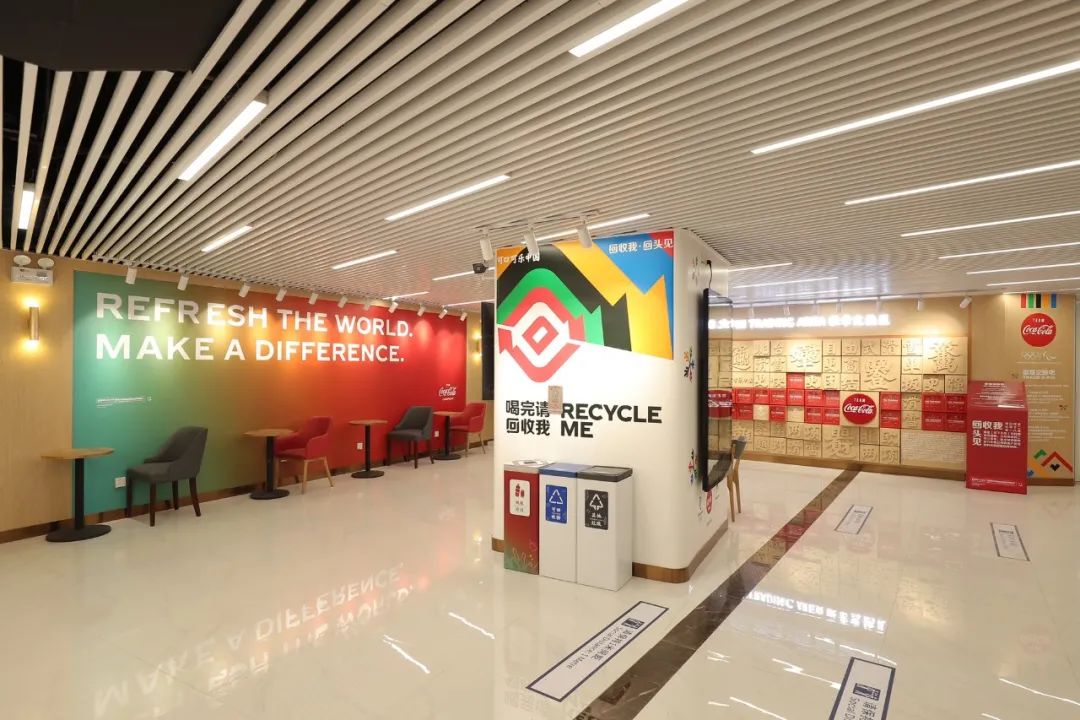 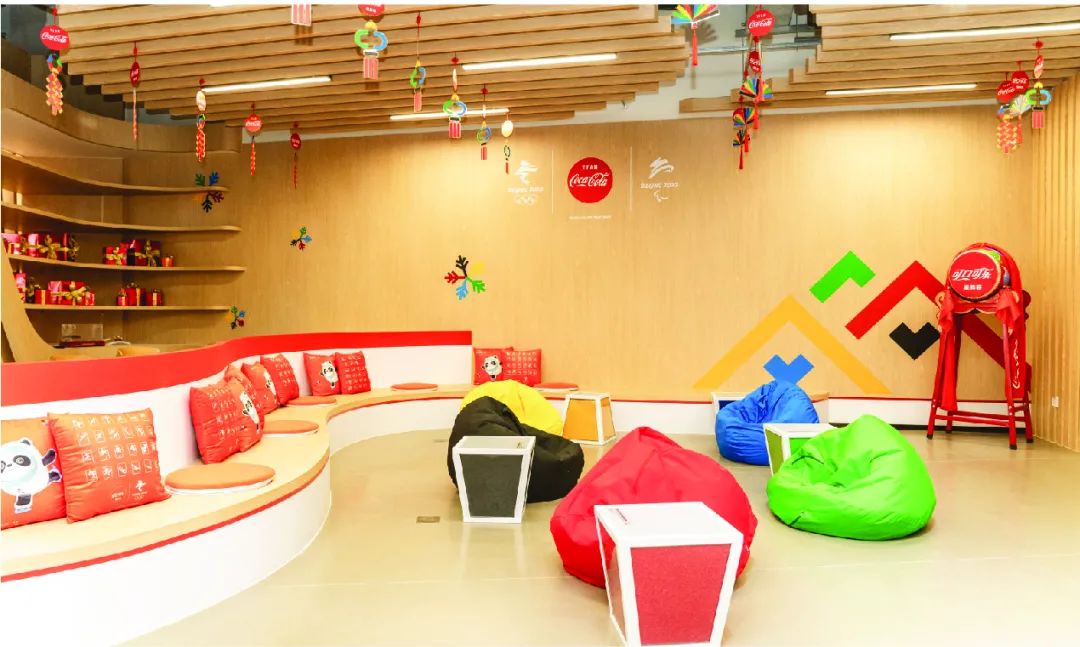 In addition, Coca Cola China also designed and provided 160000 beverage bottle recycling barrels – “bottles, cans and cans” made of rpetg (recycled material of beverage bottles) for the Winter Olympics, as well as 20 interactive devices of “no waste in the world”. The Coca Cola leisure center opened in the Three Winter Olympic villages has also widely adopted RPET (g), whether it is soft decoration, furniture and facilities such as tables and chairs and menu cards, or the rainbow wall printed with the original heart of Coca Cola company.