Xiaoshidai noted that recently, this foreign wine giant, which owns many well-known brands such as Martell, Ballantine, Chivas and so on, released the performance in the first half of fiscal year 2022 (Note: from July 1, 2021 to December 31, 2021), achieved sales of nearly 6 billion euros, continued business profit of nearly 2 billion euros, and broke the historical record. Among them, China has become one of the “growth engines” in Asia.

At the subsequent performance meeting, Alexandre Ricard, chairman and CEO of the group, H é L è ne de Tissot, head of global finance, it and operations, and other senior executives further interpreted the latest performance of the Chinese market and responded to on-site questions about price increase plans and Spring Festival sales performance. 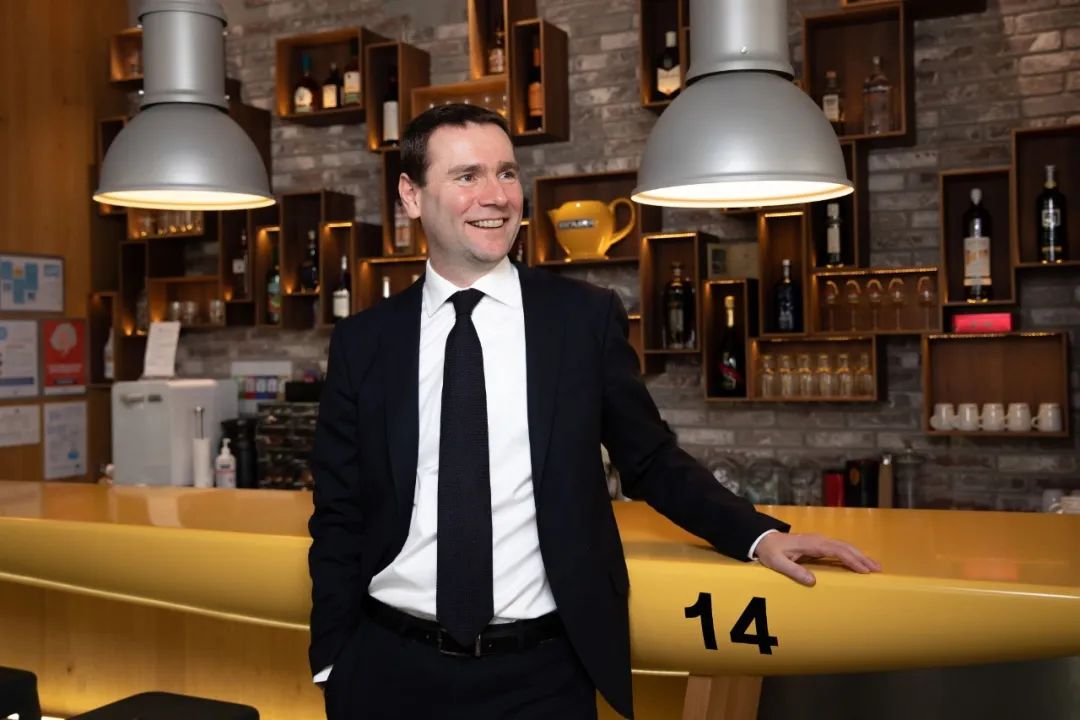 As one of the four “must win” markets delineated by Pernod Ricard, China’s performance is quite bright.

“In the first half of fiscal year 2022, we increased by 14% year-on-year in China, of which the growth during the Mid Autumn Festival was very good, while it increased by 28% compared with that before the epidemic.” Li Jiaqi said at the meeting.

According to him, although the business of ready to drink channels (i.e. hotels, bars, catering and other channels) was interrupted due to epidemic prevention, Martell’s sales remained stable in the first half of the fiscal year. “Granville has accelerated significantly, with strong growth in royal salute and Ballantine. Similarly, the development of absolute vodka is also very strong.” He mentioned. 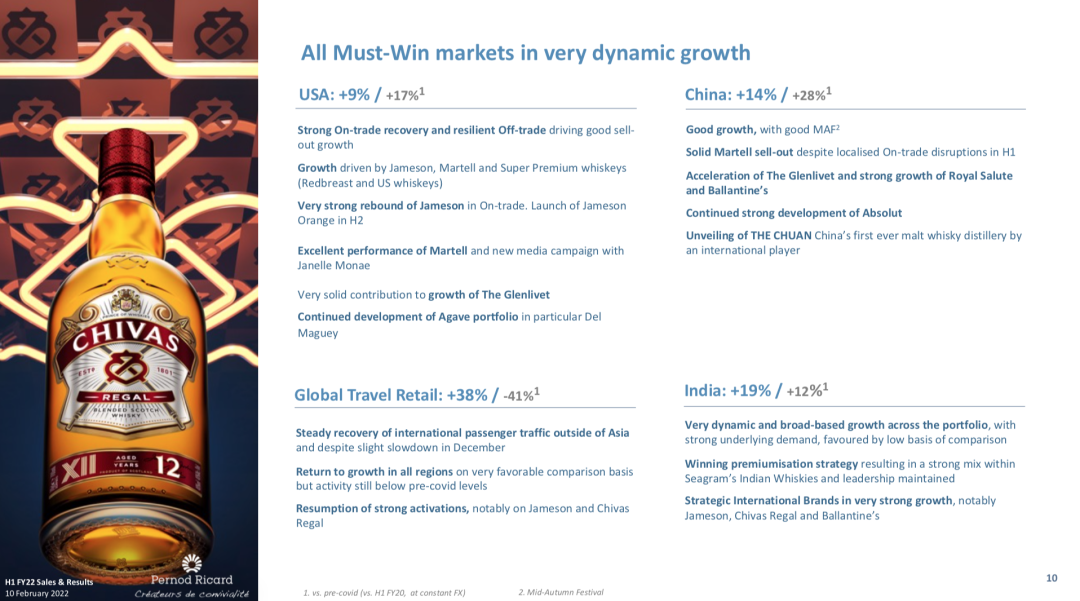 Baole Lijia had previously said that it planned to invest 1 billion yuan in the winery in 10 years. “We realize that malt whisky has great opportunities in China, so competitors are following, and we hope to become a clear leader in the market.” Philippe guettat, chairman and chief executive of Pernod Ricard Asia, once told the snack generation that the company wanted to create “iconic malt whisky with Chinese characteristics”. 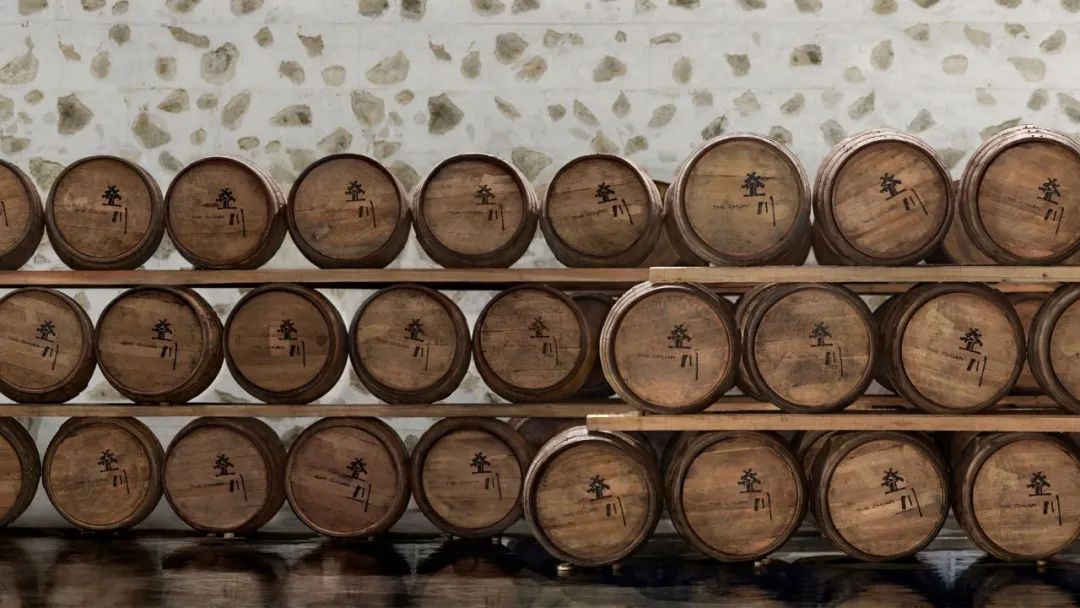 Xiaoshidai noticed that in the subsequent Q & a session, some analysts asked about the latest sales momentum of baolelika China during the lunar year of the tiger and the Spring Festival.

“For the lunar new year, we have a very strong implementation plan, which is launched before and during the Spring Festival, and we have made all preparations for the implementation. However, I’m sorry, so far, we don’t have real-time data on consumer purchases, so it’s too early to resume.” Li Jiaqi responded.

However, he also pointed out that with a high year-on-year base last year, the start of this year is expected to be moderate. “(although there is no way to give quantitative data,) the only qualitative information I can tell you is that this may be a slightly milder start than last year, because you need to remember that last year was a great year and the sales performance of the Chinese new year was excellent.” 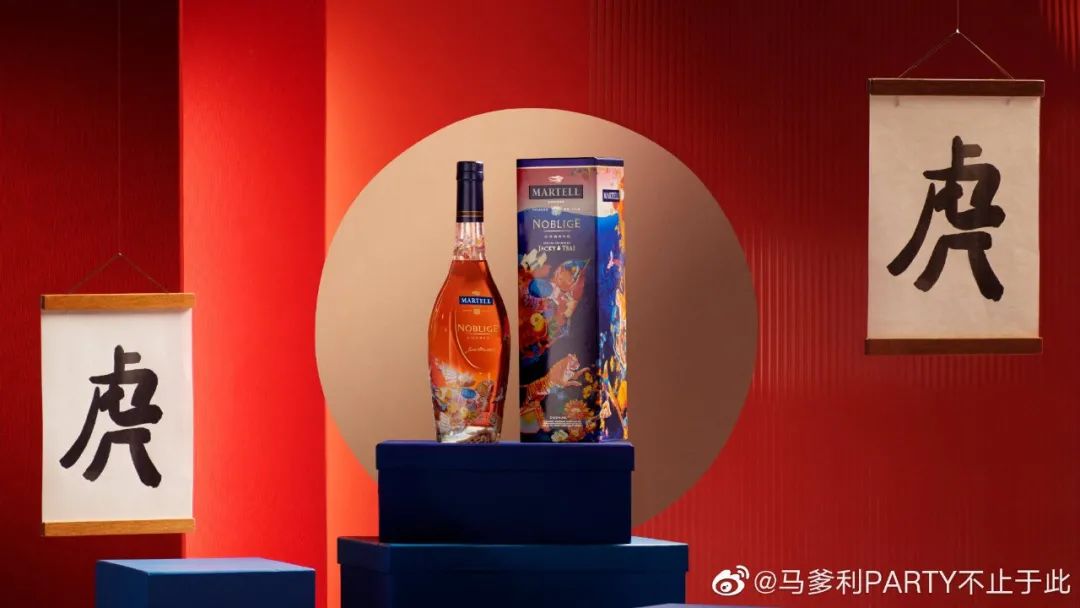 “But similarly, it is too early to say the conclusion. We will get the final sales data around March, so we will communicate again in the next performance meeting.” He said.

According to the financial report, in the first half of fiscal year 2022, the sales of Pernod Ricard reached 5.959 billion euros, a record high, achieving an organic growth of 17% (the reported growth was 20%), an increase of 13% compared with that before the epidemic. This is mainly due to the favorable impact of foreign exchange, and the appreciation of the US dollar and RMB against the euro.

In terms of regions, the sales of Pernod Ricard in all regions of the world have increased. “The American market increased by 14%, especially in the United States, Brazil and tourism retail channels. Asia and other regions increased by 16%, mainly due to the markets of China, India and Turkey. The European market increased by 21%, Spain, France and tourism retail channels fully recovered, and the Eastern European market continued to grow.” The company pointed out in its financial report. 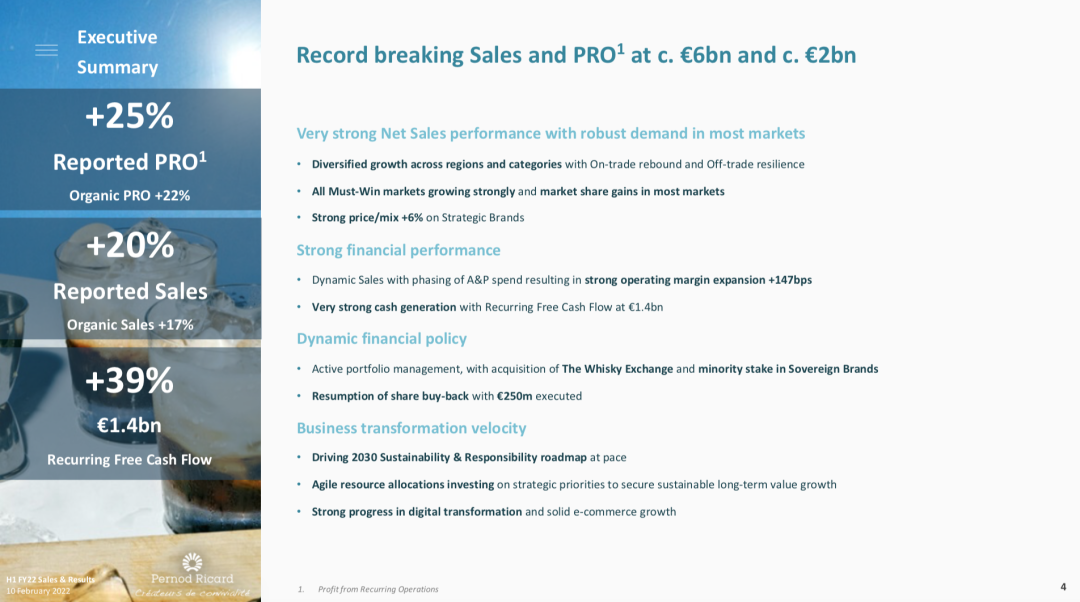 The latest semi annual report shows that the strategic international brand of Baole Ricard has increased by 19%. “All (Strategic International) brands have achieved performance growth, especially zunmeichun, Martell, Ballantine, absolute vodka and Chivas have achieved double-digit growth.” The company said. In addition, thanks to the recovery of schgran’s Indian whisky sales, strategic local brands increased by 14%.

As for specialty brands, they increased by 21% year-on-year, among which American whisky, malfy, Monkey King 47, redbread, Lilly and tequila continued to maintain a strong growth momentum. The strategic wine brands decreased by 6%, and the performance was slightly weak in the first half of the year, which was mainly affected by the decline of grape production in New Zealand.

Some products of Pernod Ricard

“If we look at our brand in more detail, you will find that Martell has increased by 11% and 8% compared with that before the epidemic. This is certainly driven by China, but it is also driven by the growth of the United States.” Li Jiaqi added at the meeting. According to the conference materials read by the snack generation, behind the strong growth momentum of Martell in China, Martell celebrities and Martell blue ribbon are “two heroes”.

Royal Salute rose by 41%. Because tourism retail is one of the main channels, it has achieved a strong recovery from the same low base. The company said that Royal Salute has also achieved good growth in markets such as mainland China, Taiwan and South Korea. 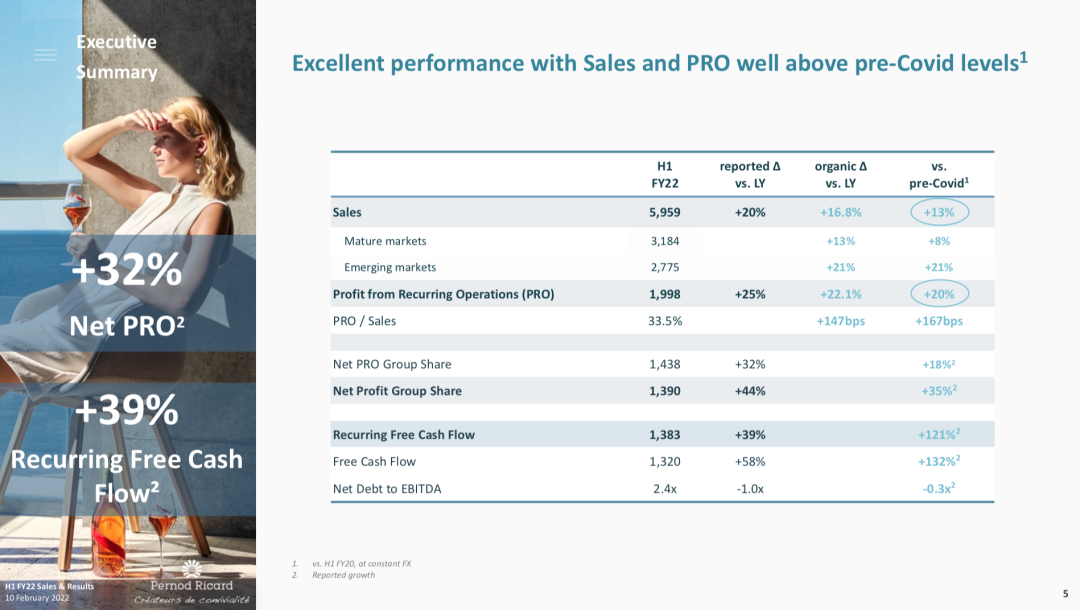 In fact, in addition to sales, the foreign wine giant’s profit from continuing operations also hit an all-time high.

The company noted that the gross profit margin increased by 39 basis points, which was offset by inflation in the cost of goods sold (mainly from logistics and commodities) due to strong pricing in global markets and cost savings from excellent operating plans. In addition, the favorable impact of foreign exchange increased the profit of continuing operations by 390 million euros, mainly due to the appreciation of the US dollar and RMB against the euro, offsetting the sharp depreciation of the Turkish Lira.

Xiaoshidai noticed that when it comes to future plans, price increases have become one of the focus topics. At the meeting, some analysts asked whether polerica has any price increase plans in China and other markets this year.

“Obviously, pricing is a very important topic in the current environment, so we see some positive price / portfolio factors. First, we are benefiting from last year’s price rise, which is largely driven by the Martell price rise in the Chinese market in March and April last year. Prices in other regions have also increased, such as Russia in January 2021 (prices have also increased.) H é L è ne de Tissot said. 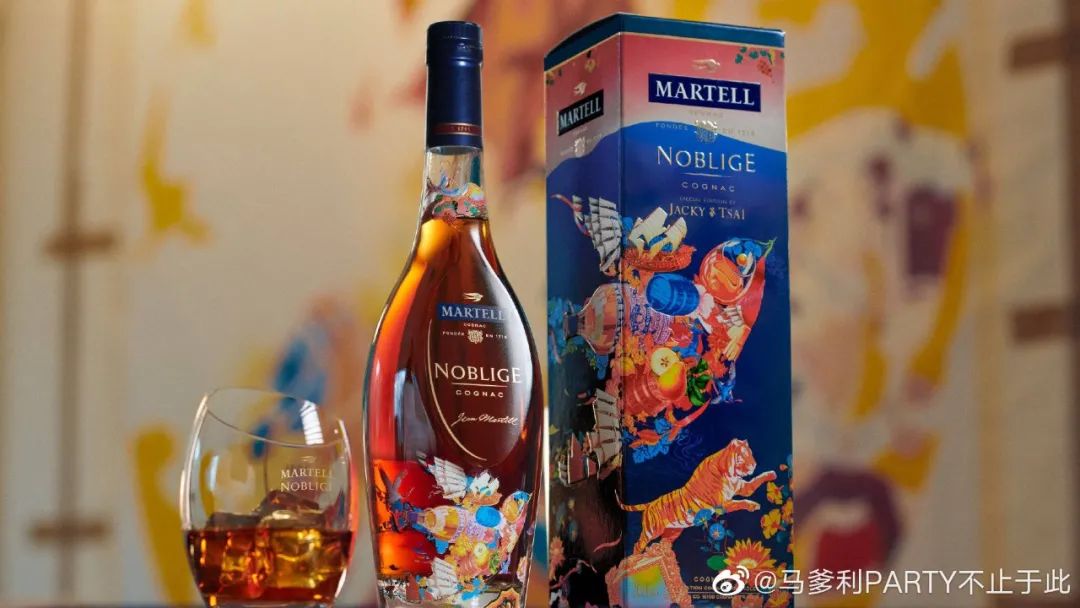 In 2022, she mentioned that at the beginning of February this year, Pernod Ricard had just announced a sharp rise in the price of its American product portfolio. At present, many of its brands in the United States have raised their prices. “In China, it’s too early to talk about rising prices.” She said. 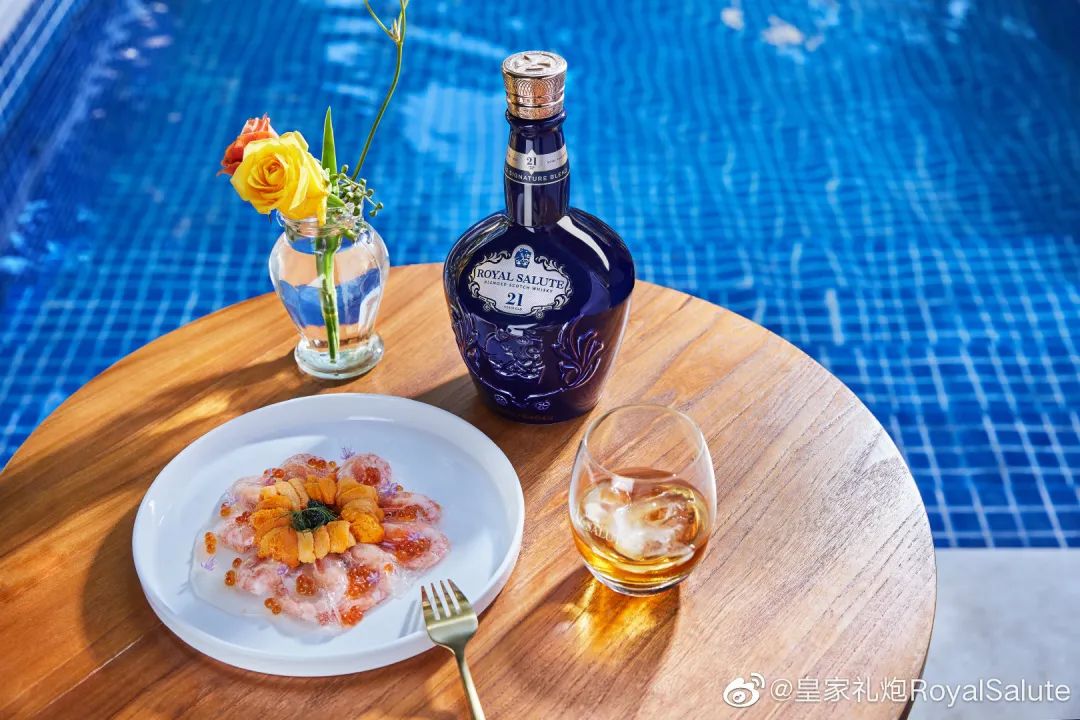 Looking forward to fiscal year 2022, the foreign wine giant is expected to continue to maintain its growth momentum.

Li Jiaqi said today that under the promotion of the “transformation driven acceleration” strategy, in the first half of fiscal year 2022, Pernod Ricard has achieved good results in various fields: the market share of most countries has increased steadily and achieved rapid growth in all “aspiring” markets. “I unremittingly commend the dedication and outstanding performance of the teams around the world. Despite the fact that COVID-19 is still affected by the market environment, we have done our best in perseverance.” He said.

He said that although the potential impact of the epidemic makes the market environment still full of uncertainty, “we believe that strong sales growth can be achieved in all regions in fy2022, with strong rebound in ready to drink channels, resilience of non ready to drink channels and gradual recovery of tourism retail channels. In addition, we will also increase investment to promote performance growth.” 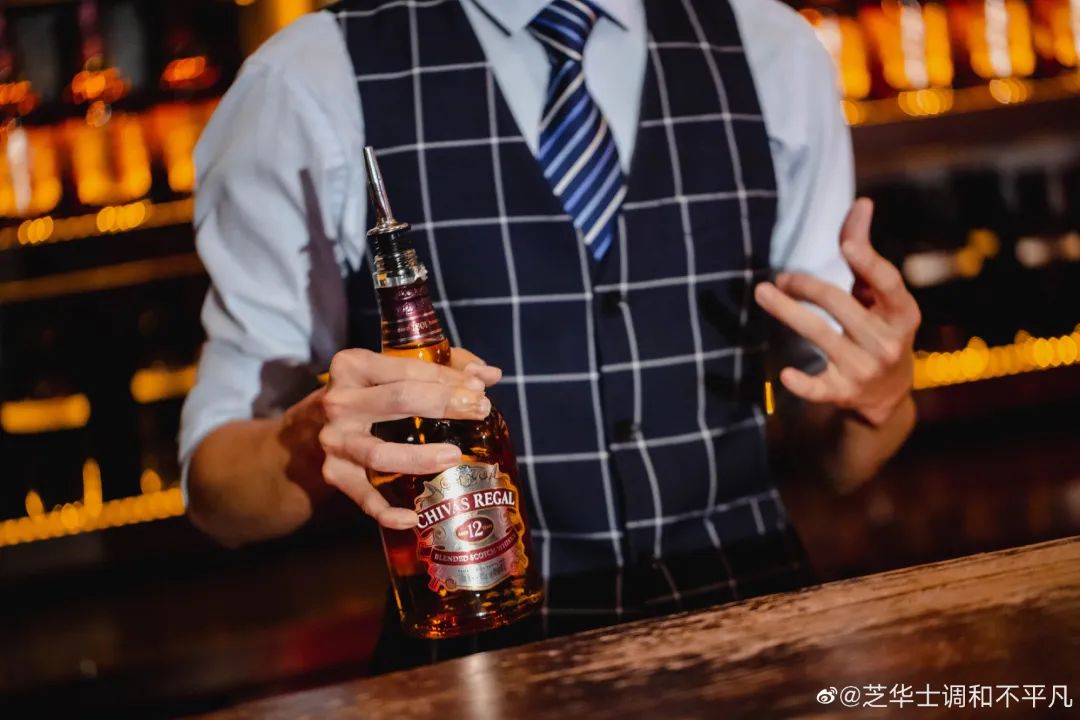 The company said that with measures such as increasing investment to boost the growth momentum of performance, it is expected that revenue will rise and drive the increase of operating profit, although the increase is expected to slow down slightly compared with the first half of the year.

Snack generation noted that polerika pointed out that advertising and promotion expenses are expected to increase in the second half of the year, accounting for about 16% in fy2022. “Our capital expenditure is generally stable compared to the previous fiscal year. We should expect some acceleration in the second half of fiscal year 2022 (Note: in natural years, i.e. the first half of 2022) to support future growth.” H é L è ne de Tissot said.

In addition, Pernod Ricard said that in fiscal year 2022, it will continue to implement the “transformation driven acceleration” strategy, including digital transformation, in order to build Pernod Ricard group into a “creating and enjoying” platform. In addition, maintain sufficient cash flow while increasing investment in key capital expenditure and strategic inventory. The company will also accelerate the stock repurchase program of about 250 million euros (with a total target of about 750 million euros in fiscal year 2022).