As a well-known brand of cross-border organic infant food, Bellamy hopes to launch a new offensive.

Xiaoshidai learned today that Bellamy is vigorously promoting its Chinese version of organic children’s milk powder. Since the new products were officially launched at the end of January, they have been settled in the mainstream e-commerce platform, and have been distributed in offline key areas. Next, this product will also expand to cross-border platforms. 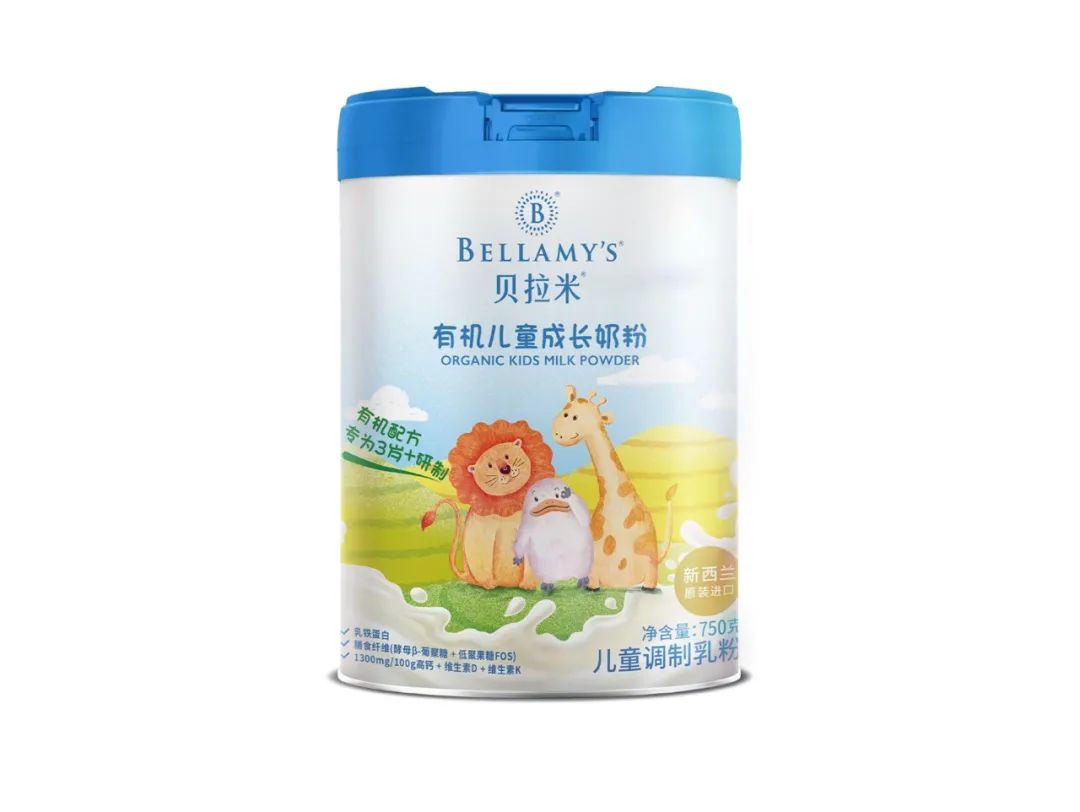 “Affected by the severe global epidemic and the continuous decline of birth rate, the infant powder industry is facing challenges, but the high-end organic milk powder and the sub category of zero complementary food for infants and children are still at the outlet. While continuing to grasp these markets, Bellamy’s product matrix will gradually extend to categories such as children’s milk powder and look for new growth points.” Luo Xiao, CEO of Bellamy, said in an exclusive exchange with snack generation.

It can be seen that under the situation that infant matching has become a “Red Sea” and the industry has entered a new integration period, Bellamy milk powder is accelerating the cultivation of the second growth curve. Xiaoshidai also learned that Bellamy’s innovation strategy is developing in the direction of globalization from focusing on the Australian market.

Targeting the needs of Chinese children

With China’s infant milk powder entering the era of stock competition and the introduction of two child and three child policies, children’s powder has been regarded by many brands as a new engine for growth.

“In recent years, due to the objective changes in the growth of newborn population and the continuous influence of the gradual scientific concept of childcare, the demand for organic children’s milk powder has shown a relatively rapid upward trend. Looking back on the changes of birth population in the past few years, we can see that the number of children aged 4-6 will continue to rise in the future, driving the growth of the market.” Bellamy told xiaoshidai.

In fact, compared with the infant formula with a scale of more than 100 billion, the category of children’s milk powder also has a certain development space. According to the industry data obtained by xiaoshidai, the market capacity of China’s children’s milk powder is expected to reach 18 billion yuan in 2021, and the compound growth rate in the next three years is expected to be 17% – 21%.

Xiaoshidai learned that Bellamy had previously launched a variety of organic children’s growth milk powder, focusing on different selling points. For example, “organic + A2” is highlighted in paragraph 4 of the platinum version sold through cross-border channels β- Casein “is said to be” the world’s first organic A2 children’s milk powder “. 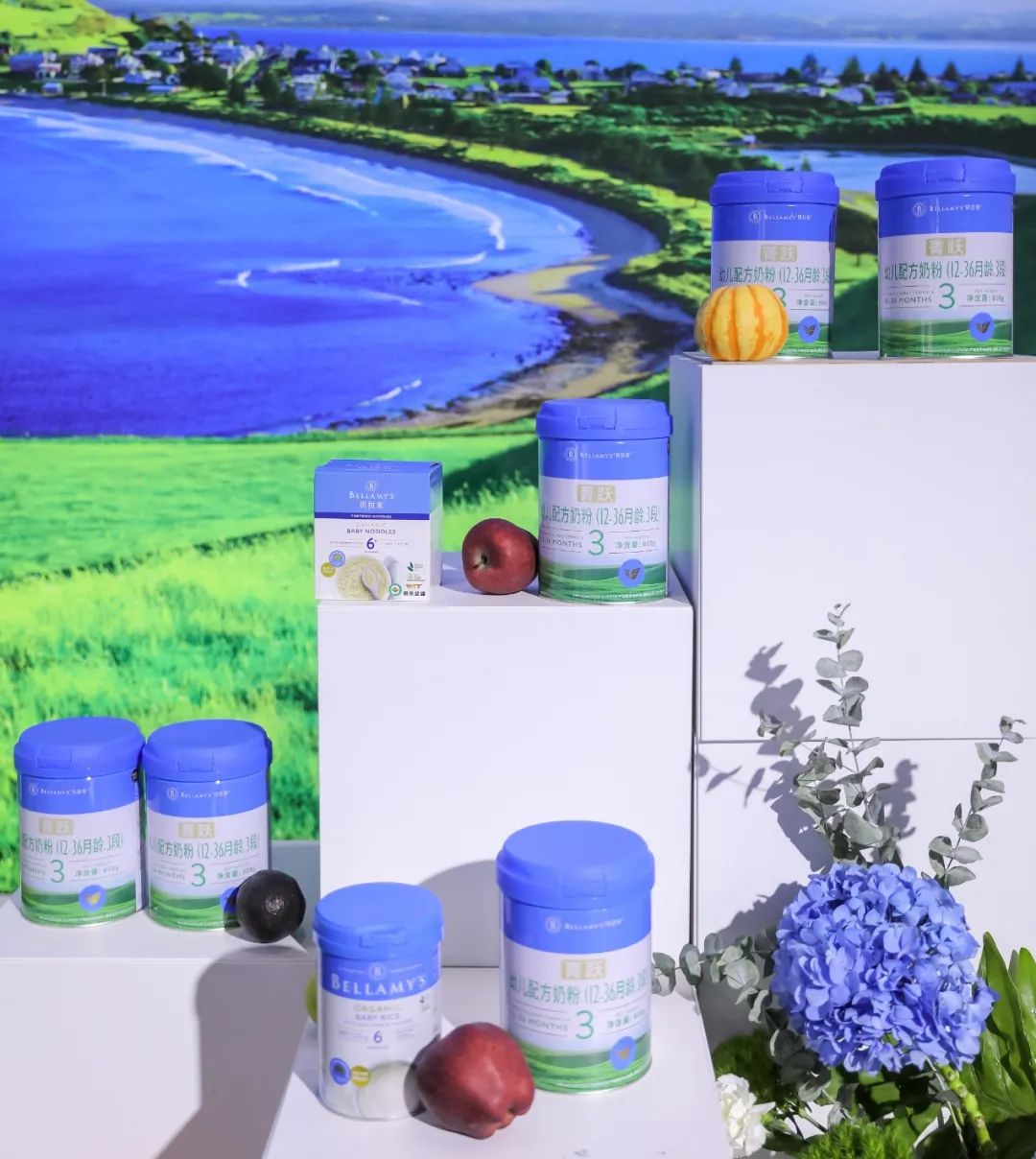 According to Bellamy, the new product is specially customized for the nutritional needs of most Chinese children over the age of 3. One of the main selling points is the “strong three treasures” strong physique formula. “‘active’ lactoferrin + FOS prebiotics+ β- Dextran can help the baby stimulate self-care and have a good physique. 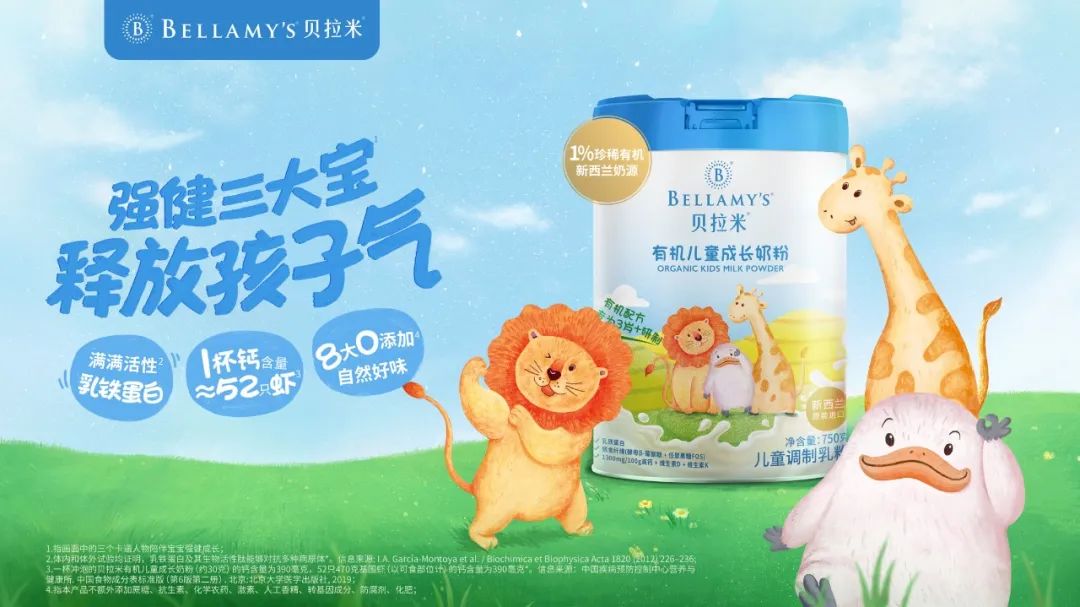 At the same time, for children in the critical period of growth and development, the above new products have added the nutritional formula of “high calcium + lactoferrin”. Every 100g of milk powder contains 1300 mg of calcium and 50mg of lactoferrin. “The calcium content of a cup of brewed milk powder (about 30g) is about equal to 52 Kiwi shrimp”. To help promote calcium absorption, vitamin D is also added to the product.

It can be seen that this product is more and more close to the core demand of consumers through innovation.

Taking the Chinese market as an example, unlike the introduction of foreign products in the past, Bellamy is launching more customized new products, and the implementation of innovative achievements has been greatly accelerated. Bellamy said that the new organic children’s milk powder customized for the Chinese market took only six months to complete the listing, aiming to comply with the rapid growth of this market. 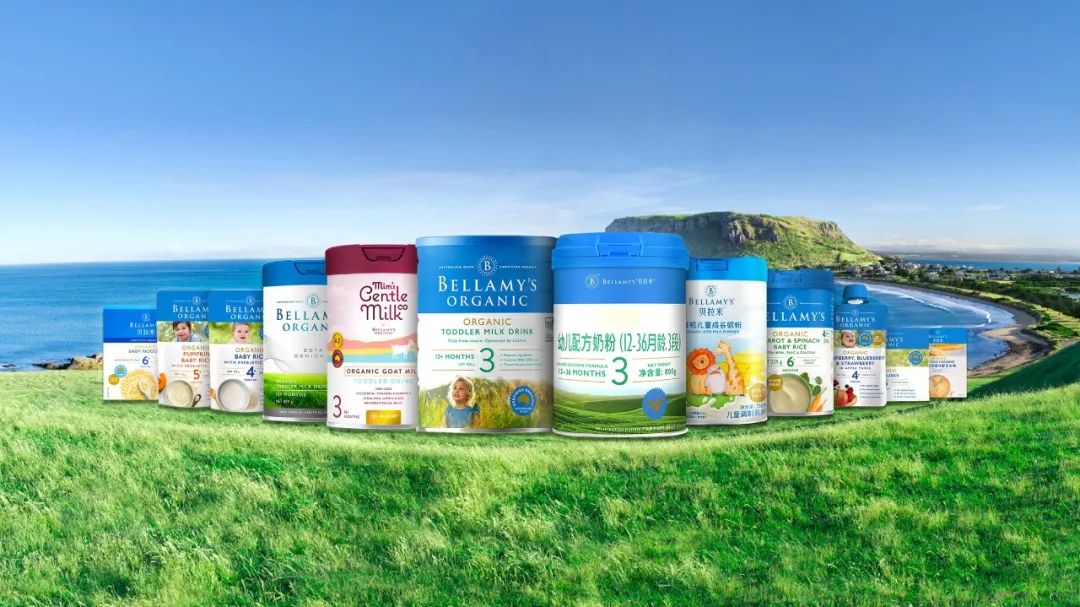 Xiaoshidai learned that in order to optimize the innovation model, Bellamy also established the global innovation department last year. “In the past, the innovation model was dominated by the Australian market. The establishment of the global innovation department is one of our important strategies to deepen the integrated management of China and Australia. We hope to integrate global advantageous resources, optimize product structure, speed up new product development and better meet the needs of the local market.” Luo Xiao revealed.

She also said that since being wholly acquired by Mengniu in 2019, Bellamy has received the support of the parent company in R & D and supply chain. In terms of research and development, Bellamy enjoys the long-term systematic accumulation of Mengniu in the fields of early life nutrition, children’s nutrition and milk science, so as to develop products closer to Chinese babies. In order to support the rapid implementation of innovation, Bellamy will also supplement food in the past two years

Behind the increasing global innovation, Bellamy believes that this will become an important measure to achieve growth in the post epidemic era. Luo Xiao said that Bellamy has delineated three innovation strategic priorities: continuously improving brand influence, steadily promoting the online and offline integration strategy, and strengthening the innovation of zero and auxiliary foods.

Bellamy told xiaoshidai that Bellamy would accelerate the implementation of these three key strategies in 2022. Among them, in terms of continuously improving the brand influence, Bellamy will strengthen the brand image of “organic +” through brand renewal, and narrow the distance with the new generation of young mothers through new media marketing, organic Festival, joint IP activities, private domain marketing and so on. 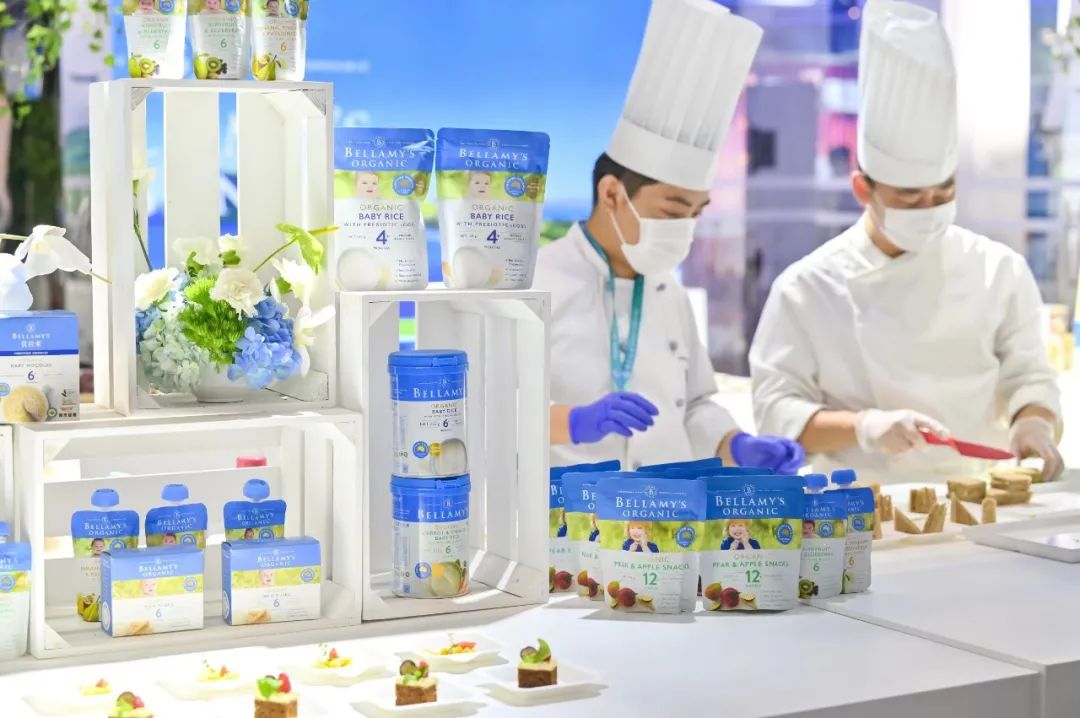 In terms of online and offline integration, Bellamy said that it will focus on resource intensive cultivation of key markets and continue to provide efficient enabling channels. Tiktok will be developing a new channel for Kwai Chung, such as Tmall and Jingdong, while developing channels for direct seeding channels such as sinking channels and jitter. “Bellamy is committed to becoming the preferred brand in the field of organic products by actively trying diversified ways of recruitment and continuous innovation.”.

As for strengthening the innovation of auxiliary food, Bellamy revealed that Bellamy’s global innovation department will accelerate localized R & D and production, create a product line closer to the needs of local consumers, and expand the category to fast-growing infant snacks. 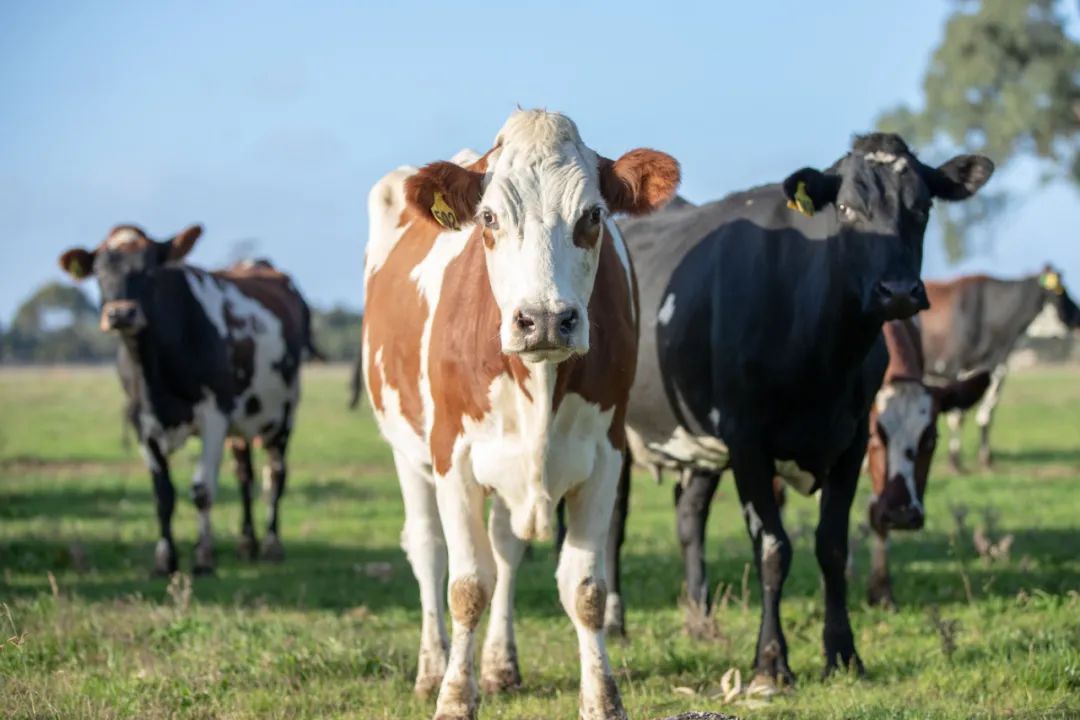 In addition to product expansion, Bellamy’s cross-border version of the classic blue can baby formula will also be upgraded globally, further consolidating the brand’s position in the organic baby food category.

At the Expo last year, Bellamy once told xiaoshidai that China is the world’s second largest economy and the fourth largest country of global organic consumption, and the Chinese market has always been the focus of strategy. More and more post-90s are entering childbearing age. For this generation of “houlang parents”, price is no longer the primary consideration when purchasing products. High quality products and strong brand power are the more important selection criteria.

“As one of the leaders in the high-end organic baby food industry, Bellamy will focus on its own industry in the world, meet the needs of generation Z consumers, and specialize in the nutritional and health value of organic ingredients in the early life of babies.” Bellamy said.

Pay attention to “xiaoshidai” (wechat: foodinc) “and reply to” Bellamy “to see the wonderful news.