Xiaoshidai noted that today, Dongpeng beverage’s latest performance in 2021 was released, which is also the first annual report handed over by this “China’s first functional beverage share” since it was listed in May last year. The announcement shows that during the reporting period, the company’s operating revenue was 6.978 billion yuan, a year-on-year increase of 40.72%; The net profit attributable to shareholders of listed companies was 1.193 billion yuan, a year-on-year increase of 46.90%. 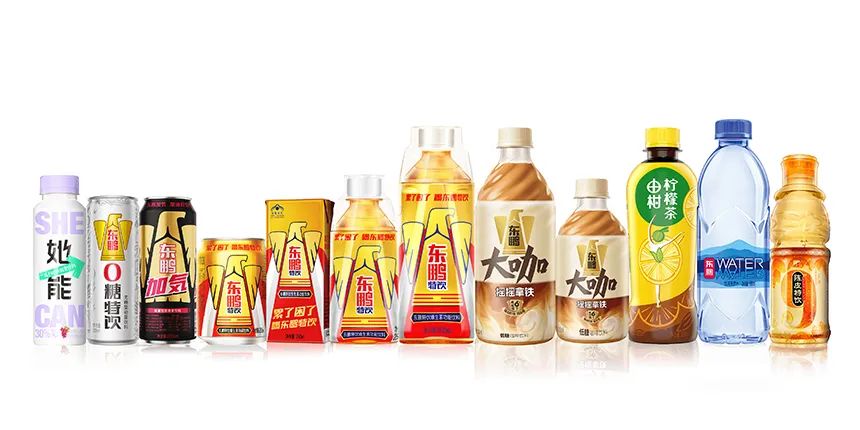 Dongpeng beverage pointed out that the operating revenue increased significantly compared with the same period last year, mainly because the company continued to implement the omni-channel intensive cultivation strategy in Guangdong and actively developed national sales channels, driving the continuous improvement of the sales volume of 500ml golden bottle Dongpeng special drink and other kinds of drinks.

“In 2021, while the company’s regional marketing growth in Guangdong, the revenue growth outside Guangdong is strong. Among them, the East China market has the potential to recreate a Guangdong market. I believe that the southwest market can also rise to a higher level in the future.” Lin Muqin, chairman and President of Dongpeng beverage (Group) Co., Ltd., said at the performance meeting today. 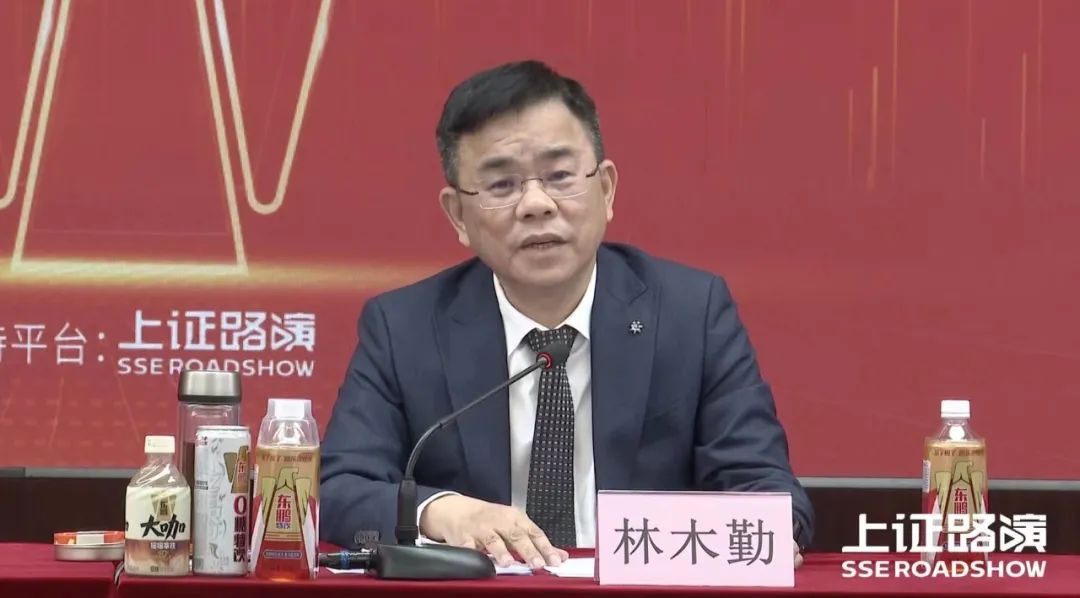 Xiaoshidai learned that at the above performance meeting held in Guangzhou, the management of the company, including Lin Shuqin, further talked about Dongpeng beverage’s future product diversification, national expansion strategy, energy beverage market competition pattern and other topics. It is revealed that during the reporting period, the sales volume of Dongpeng special drink

Let’s take a look at the live news.

In terms of regions, Guangdong, the “base” of Dongpeng beverage, is still the region with the highest proportion of income, and with the pace of national expansion of the company, this proportion is declining (from 49.99% to 45.94%).

“Our development across the country is uneven, which hides great development opportunities.” Lin Shuqin said at the meeting today that the market in Guangdong is still growing, and the markets in East China and southwest China are “battlefields” for beverage manufacturers. “The real national brand accounts for about 20% of the market in Guangdong, and we should do so in the future. Then, nationwide, if we divide 4 billion by 0.2, Dongpeng will roughly reach 20 billion.” He said. 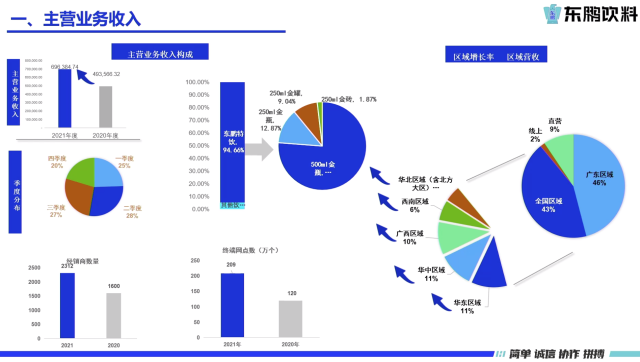 Dongpeng beverage said that in 2021, it will continue to implement the strategy of “intensive cultivation through all channels” in Guangdong, focus on investing resources in weak areas and reduce the imbalance between regions. At the same time, through the new products “Dongpeng 0 sugar” and “Dongpeng big coffee”, it will layout CBD and science and technology parks, open up medium and high-end outlets, break through the drinking population and increase single point output.

In other regional markets in China, the company said that it continued to improve and build the sales system of dealers, wholesalers and postmen, adopted the large circulation mode in the blank market and the omni-channel intensive cultivation mode in the mature market, took the development of terminal outlets as the assessment index, and took the idea of “freezing is the best display”, Increase the proportion of revenue by strengthening the placement of freezers and product display at the channel end.

It is worth noting that the revenue growth in East China and southwest China is “the fastest”, with growth rates of 79.07% and 65.37% respectively. In 2021, the sales revenue will reach 772 million yuan and 432 million yuan respectively. 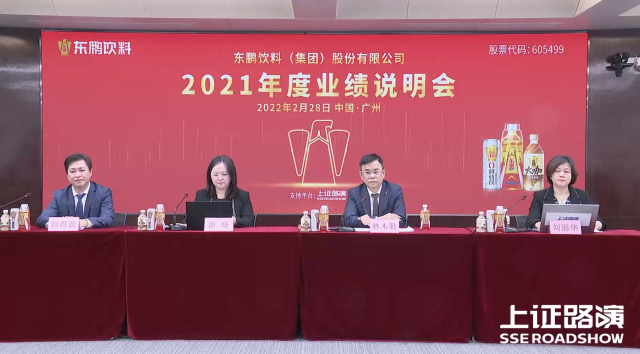 “Because we entered the East China market earlier, the dealer system is well established, and the strength of dealers is relatively strong. The company has a large brand influence in this region and high consumer recognition. We believe that the East China market has the potential to rebuild a Guangdong market.” Liu Lihua, Secretary of the board of directors and vice president of Dongpeng beverage (Group) Co., Ltd., added at the meeting today.

In addition, she said that the southwest region has a large population base and great market potential. “After development in recent years, the southwest Business Department of our company has preliminarily completed the construction of the sales system, the channels have sunk to the county level, and county-level dealers have been set up in more than 300 county-level cities. In terms of terminal outlets, our southwest business department has also increased the development of outlets such as schools, Internet cafes and scenic spots.” She said.

At present, the distribution channel is the main sales channel of the company, accounting for 88.63% of the revenue. By the end of the reporting period, Dongpeng beverage had 2312 distributors, with a sales network covering about 2.09 million terminal stores across the country.

In terms of products, Dongpeng special drink is still a “big single product” accounting for more than 90% of the company’s revenue. At present, the company is accelerating the construction of “Dongpeng energy +” product matrix.

“In terms of product development, first of all, we will focus on the energy beverage track and build the product matrix of Dongpeng energy +. In the future, we also want to launch some new energy drinks developed from plant raw materials homologous to medicine and food.” Lin Qin said.

“In the future, I also hope that in addition to Dongpeng special drink, we will be able to produce two more products with a magnitude of more than 500 million and then more than 1 billion. I believe we will be able to achieve this goal in the next two or three years.” Lin Muqin proposed.

Xiaoshidai noticed that today, when the financial report was released, the 250ml “China Gold jar” of Dongpeng special drink has been officially announced and listed at the same time. Today, at the online new product Conference for its dealers and all business teams across the country, Dongpeng beverage announced the official launch of its canned Dongpeng special drink “China gold can” with upgraded brand image. At the same time, Hangzhou Asian organizing committee and Dongpeng beverage announced that Dongpeng special drink has become the “officially designated functional beverage for Hangzhou Asian Games”. 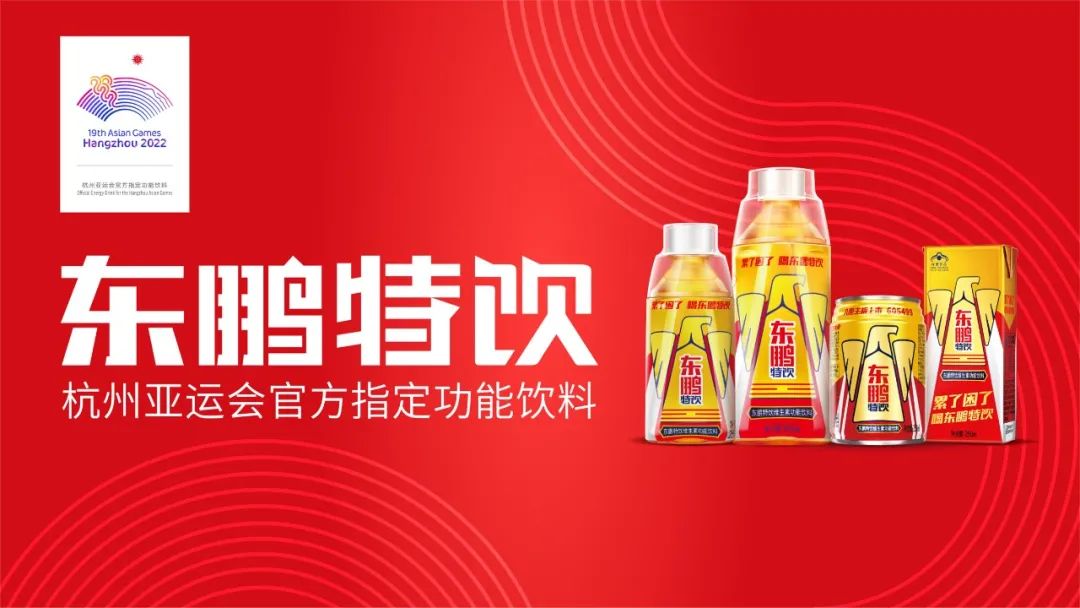 It is reported that the “China Gold pot” launched this time is more fashionable and younger in overall design. The theme words of “A-share main board listing 605499” and “Dongpeng energy, China has gold pot” are added at the neck of the pot; In terms of material, the original aluminum two-piece can is upgraded to a higher cost tinplate three-piece can. While the hardness and weight of the can body are increased, the whole can have more texture.

Starting from March, “China Gold pot” will be put on shelves in traditional channels such as independent convenience stores and modern channels such as chain supermarkets and gas stations. The recommended retail price is 4 yuan for traditional channels and 5-6 yuan for CVs and gas station service areas. At present, the selling price of the mainstream 500ml bottled products of Dongpeng special drink is about 5 yuan. 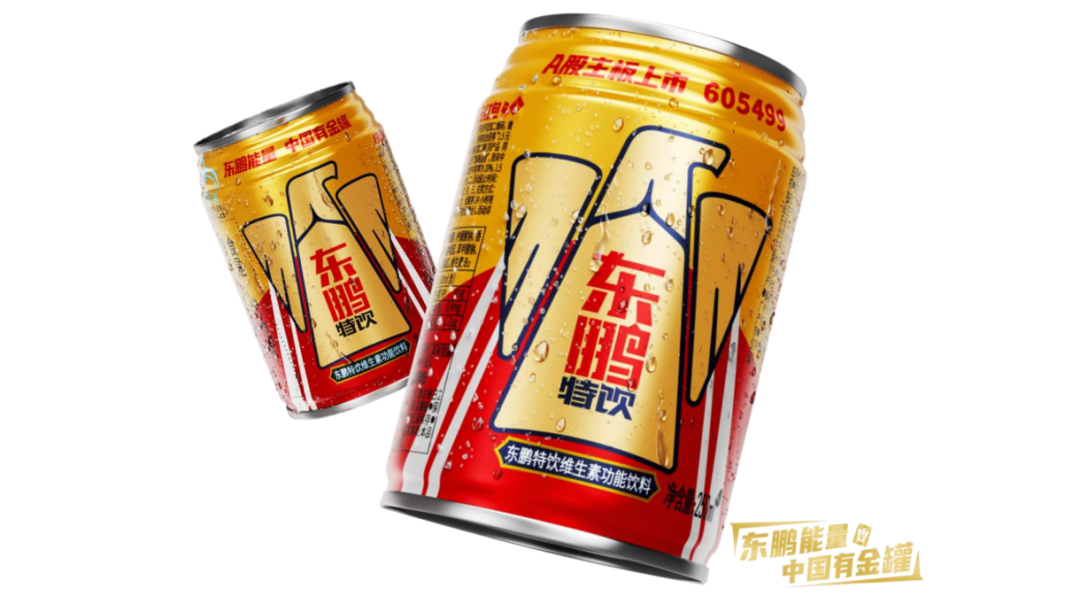 Obviously, this is the latest move of Dongpeng special drink in the overweight high-end energy beverage market. It has the posture of “positive rigidity” with the classic 250ml canned product of Red Bull, and points to the “core hinterland” of Red Bull, its biggest competitor. Xiaoshidai searched on the e-commerce platform today and found that the price of 250ml * 6 cans of Red Bull Vitamin flavor beverage is 31.9 yuan, about 5.32 yuan / can.

It is quite remarkable that while launching an attack on the high-end market where Red Bull has a significant advantage, Dongpeng special drink has surpassed Red Bull China in terms of sales volume (in tons).

From December 2020 to November 2021, the sales of Dongpeng special drinks increased by 28.4% year-on-year, nearly three times the average growth rate of 10.8% in the energy beverage industry; The market share of sales jumped from 20.2% in 2021 to 23.4%, with an increase of 27%; At present, the share of national market sales ranks second, second only to red bull. 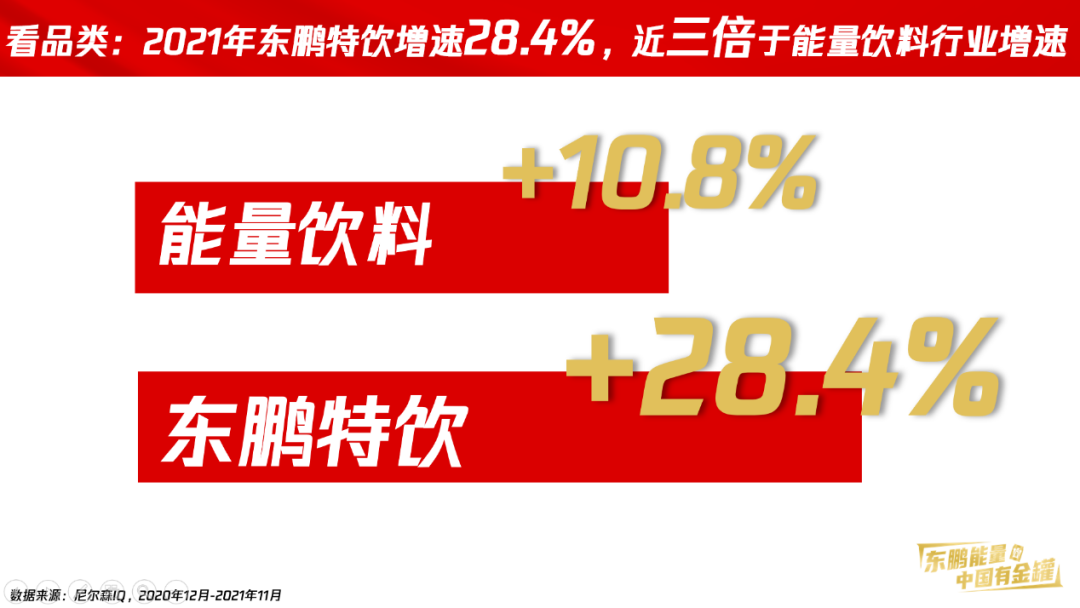 In addition, according to Nielsen data, Dongpeng beverage has become the fastest-growing enterprise with an annual growth rate of 27%, jumping from 14th to 11th in the previous year. “2022 will hit the top 10,” the company said

Dongpeng special drink 500ml product has also become the 11th largest beverage product in China, up 5 places from last year, and is the fastest growing single product in the top 20, up 48%.

“In 2021, our performance in the energy beverage market is quite good. According to the data of Nixon, Dongpeng special drink has almost obtained the majority of the incremental part of energy beverage. Many other brands will keep their sales unchanged, but its market share will decline.” Lin Liqin said at the meeting today.

At present, China’s energy drinks are still a highly concentrated market. According to Nielsen IQ research and analysis report on the growth of energy beverage market, the market share of the top five brands in the market (red bull, Dongpeng special drink, Lehu, zhongwo and magic claw) is as high as 89.90%.

Looking forward to 2022, LinQin said that the company’s operating revenue is expected to grow by no less than 15% year-on-year. In order to achieve this goal, Dongpeng beverage will promote future work in the following five aspects.

In terms of industrial strategy, he said that Dongpeng beverage will build the management organization of the group’s large supply chain, promote the production and marketing coordination mode of the supply chain, realize the integrated management of production, marketing and inventory from the supply end to the business end, strengthen the quality management system, look forward to the national capacity layout, consolidate the advantages of digital information operation, and accelerate the construction of echelon talent capacity, Realize “quality first, production and marketing coordination, ensure supply, reduce cost and increase efficiency”.

“In the next three to five years, we must reach the coverage of 4 million outlets, so that our consumers can buy our products at any time. In addition, we need to increase the display and freezing of products. Whether the drinks are frozen or not is a very key. Many consumers feel that it is better to drink when they are frozen, so we need to grab the refrigerator and display.” Lin Qin said. 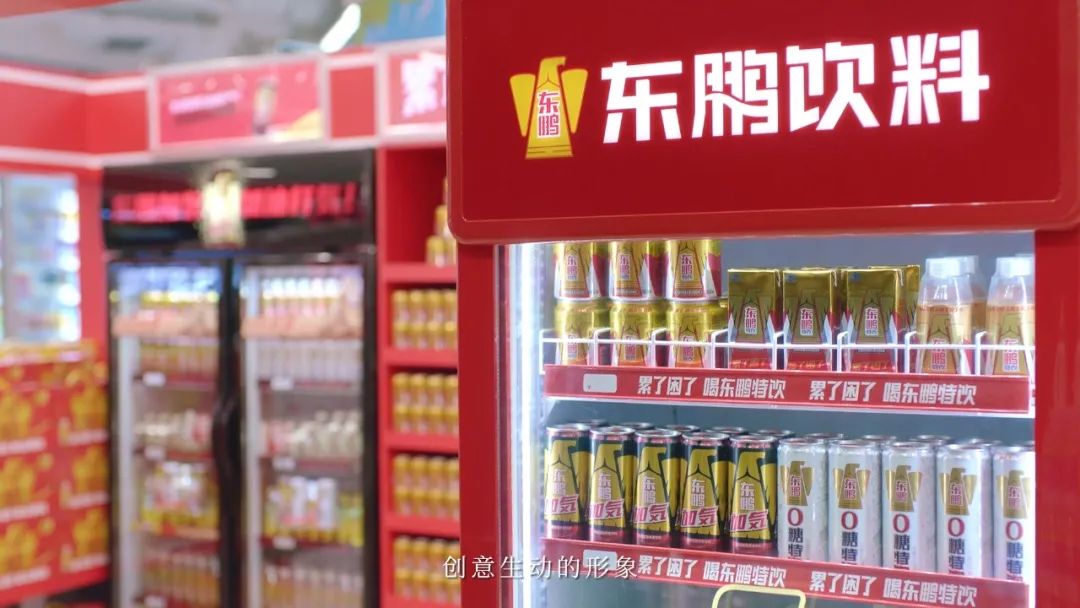 In terms of customer strategy, the company plans to meet the needs of “sports people”, “students”, “entertainment people”, “official People” and “overtime people” on the basis of consolidating and maintaining the existing “driving people” such as self driving drivers and truck drivers, the “blue collar / new blue collar people” such as takeout riders and express brothers, and the “white-collar consumers” such as medical white-collar workers and it programmers Scene requirements of “people in need of good state”.

In terms of product strategy, Lin Shuqin said that the company will focus on the beverage track and lock in the consumption scene of “tired and sleepy”. Based on the energy package, continuously subdivide the needs of consumers for taste and function, superimpose rich elements for new product development, and actively build a “Dongpeng energy family” with “one super and many strong”.

In terms of brand strategy, he said that the company will continue to carry out mass brand communication, take important events as an opportunity to integrate all media communication, make Dongpeng special drink become an “energy partner on the road of struggle”, and shape the national brand image of “winning glory for the country and Dongpeng energy”.

In addition, Dongpeng beverage revealed that seven production bases have been built and put into operation, including Zengcheng base, South China base, Dongguan base, Anhui base, Nanning base, Chongqing base and Haifeng base. With the continuous expansion of market demand, the company will add new product production lines in Zengcheng base, South China base, Anhui base and Chongqing base, and continue to promote the construction of Changsha base and Quzhou base.