Although it is still losing money, oatly, a global oat milk giant, continues to run wildly. “We broke sales and revenue records every quarter of 2021.” Toni Petersson, chief executive of oatly, spoke at the 2021 performance conference held recently.

According to the annual report card of the Swedish oat milk producer, oatly’s revenue increased by about 53% year-on-year to US $643 million (about RMB 4.067 billion) last year, while sales, administration and other expenses increased by more than 1.1 times to US $354 million year-on-year, resulting in a loss of US $212 million, an increase of 2.5 times over the previous year. 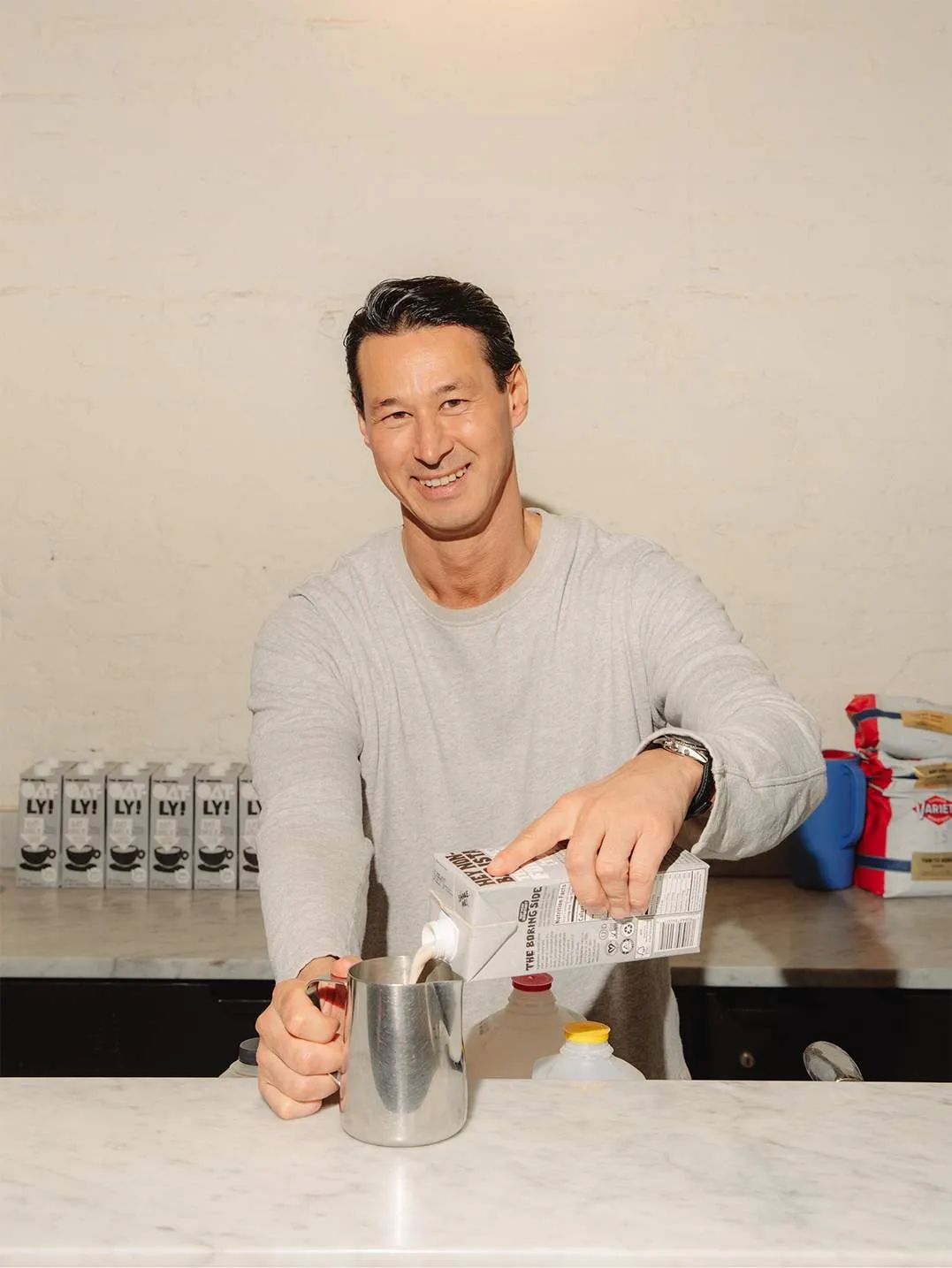 Xiaoshidai noticed that Toni Petersson revealed at the meeting that with the landing of Chinese factories, his Asian team has drawn up three growth priorities. In addition, oatly’s revenue is expected to reach a new high this year. Next, let’s have a look.

Among the three regional markets of oatly, Asia was the fastest growing region last year. The Chinese mainland has China’s 5 core markets, including Mainland China, Hongkong, China, Taiwan, Singapore and South Korea. Most of the revenue comes from China. According to the above oatly financial report, in 2021, its Asian business revenue was US $127 million (about RMB 803 million), an increase of 136% year-on-year, and its revenue share in the group has risen to 20%. 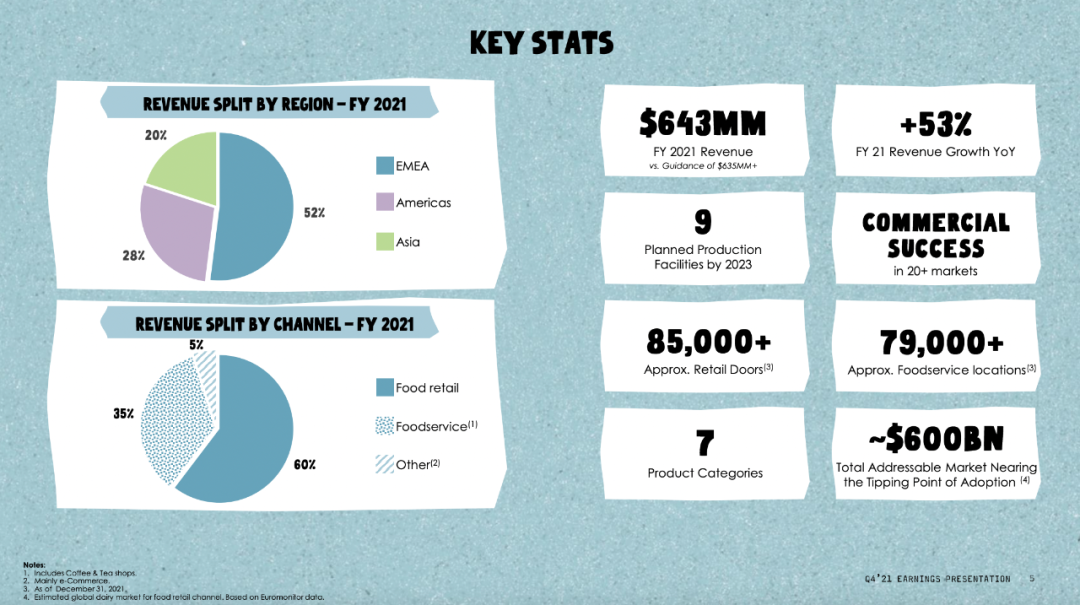 “In Asia, our team performed very well and experienced an extremely difficult consumption environment against the background of the epidemic.” Petersson said at the meeting that 70% of oatly’s revenue in Asia comes from catering services, which has been greatly affected by the closure of stores related to the epidemic. “However, the flexibility of our team has led to significant growth (overall performance), not only increasing the distribution points of catering services, but also establishing the basis for brand listing in retail channels.” Petersson said that in addition, oatly continues to maintain its leading position in tmall in the e-commerce channel. 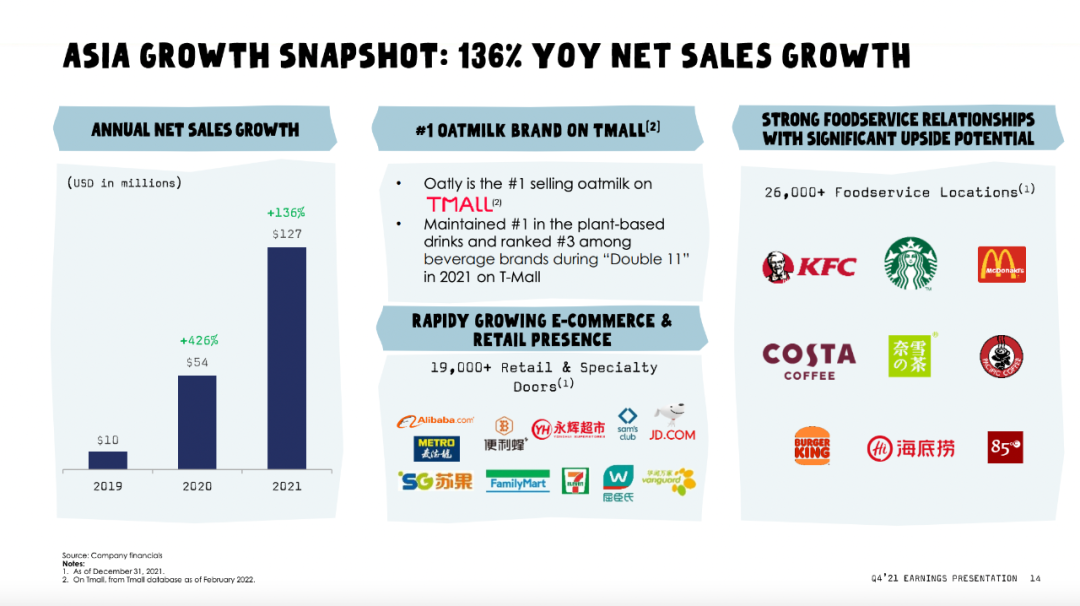 Looking through the conference materials, the snack generation found that as of December 31, 2021, oatly had entered more than 26000 catering stores in Asia. In addition to the well-known coffee, tea and Western fast food chains, there were also “new noodles” from Chinese food and baking, such as Haidilao and 85 ° C. In retail and e-commerce, oatly has more than 19000 outlets, including convenience stores such as the whole family and 7-11, supermarkets such as China Resources Vanguard and Yonghui, as well as member manufacturers such as Sam and metro. It is noteworthy that oatly, which has “multi-point flowering”, has also recently set out three key points for the growth of the Asian market. Petersson said at the meeting that as oatly will build two local factories in China, the focus of future growth strategy includes: 1) accelerating the expansion of retail channels in major cities; 2) Promote the growth of catering channels through new and existing cooperation, and maintain the dominant position in coffee and tea; 3) Promote diversified growth in e-commerce channels and in new and existing categories through new SKU and oat milk food innovations, including oat based ice cream and yogurt. 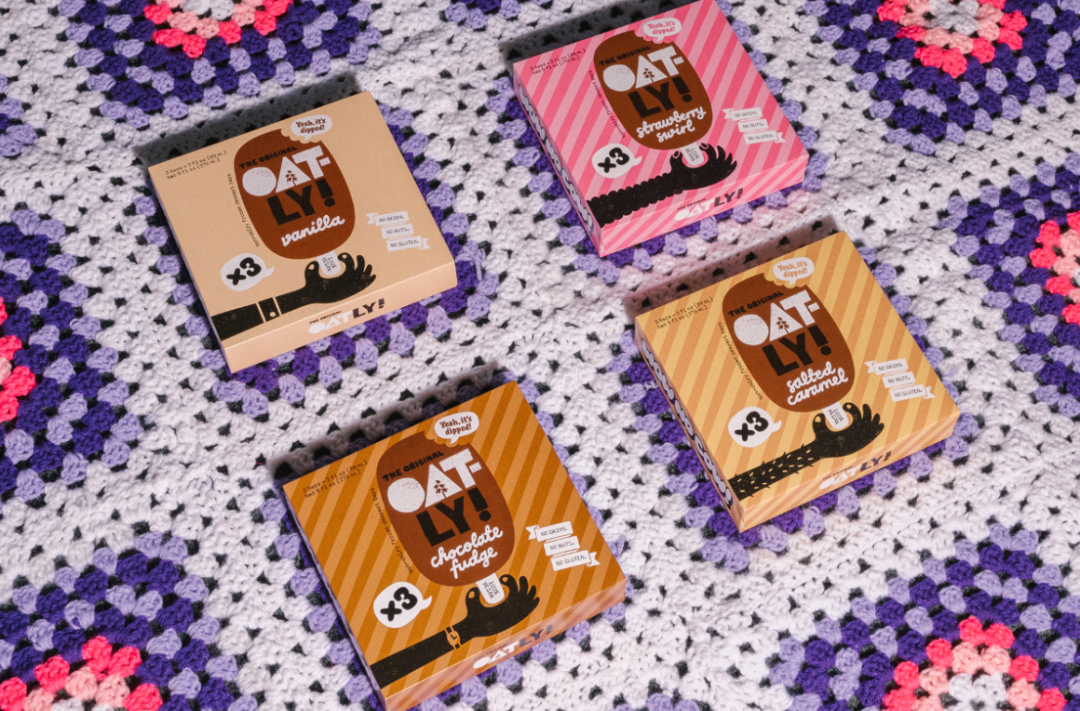 Snack generation also noticed that some analysts asked at the meeting whether oatly’s current innovation focus would shift from oat milk to other products such as oat ice cream. In this regard, Petersson responded that the company’s innovation is still focused on oat milk, hoping to boost the trend of plant-based. “You will find that this is the category of new consumers.”.

According to Euromonitor International data quoted from oatly conference materials, the share of oat milk in retail channels has continued to rise in the past three years, accounting for 3.4% in the plant-based market by 2021. As a “rookie” of vegetable milk in recent years, oat milk has attracted many enterprises, including powerful players such as Coca Cola, Vitasoy and Mengniu, as well as cutting-edge brands such as plant labels and oatoat. 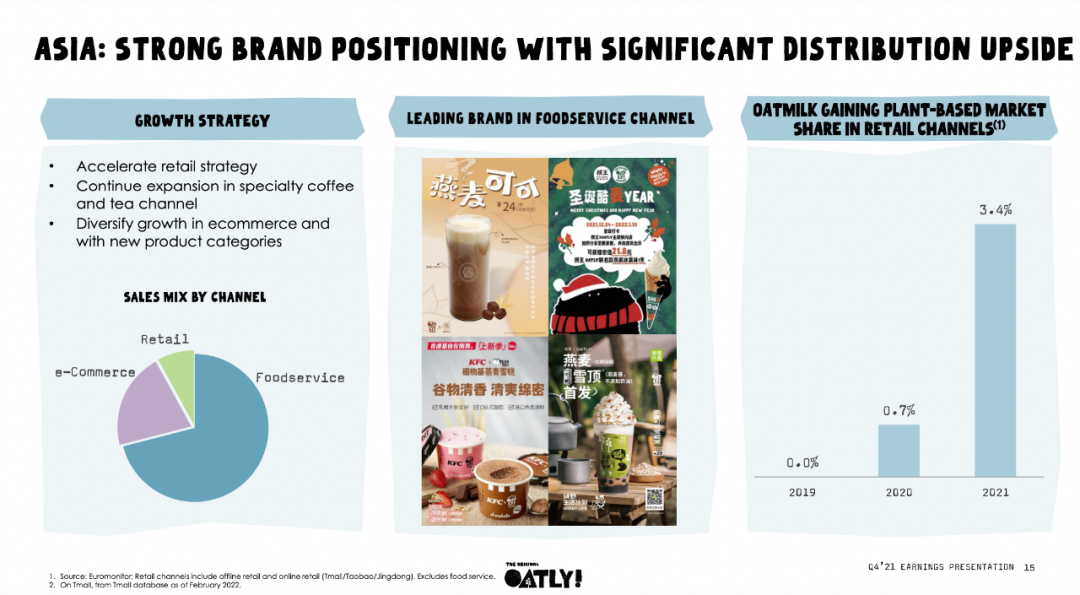 in fact, in the face of intensified competition in the Chinese market, oatly is also trying to play a variety of tricks with oat milk. For example, at the Hotelex international hotel supplies and catering Expo at the end of last year, the company showed a oat milk and oat milk cover specially developed for tea. At the meeting, Petersson further pointed out that with the improvement of supply capacity, oatly will expand to more products at the right time. “In Asia, you are about to see a wider range of product innovation. Shangxin will be faster than the United States and Europe. But for other regions, (expanding innovation) is only a matter of time.”.

Looking forward to 2022, Petersson said that with the increase of distribution outlets, this will promote the increase of quarterly revenue, and it is expected to set a new record this year. Oatly pointed out in the financial report that the revenue in 2022 is expected to be US $880 million ~ 920 million (about RMB 5.572 billion ~ 5.825 billion), with a year-on-year increase of 37% to 43%, and the growth in various regions is strong.

However, Petersson also said that revenue and gross profit margin are expected to be under pressure in the first quarter of 2022, including the impact of epidemic restrictions and travel restrictions in some countries, supply chain delays and interruptions, rising inflationary pressure, etc. The good news is that the situation in many key business regions has improved since March, including production in the United States and Asia and revenue in the three regions. Turning to the Asian market, Petersson said it was still expected to achieve strong growth throughout the year. “With the launch of new products, we will be able to expand the product range and launch more products with customized specifications for retail and e-commerce”. 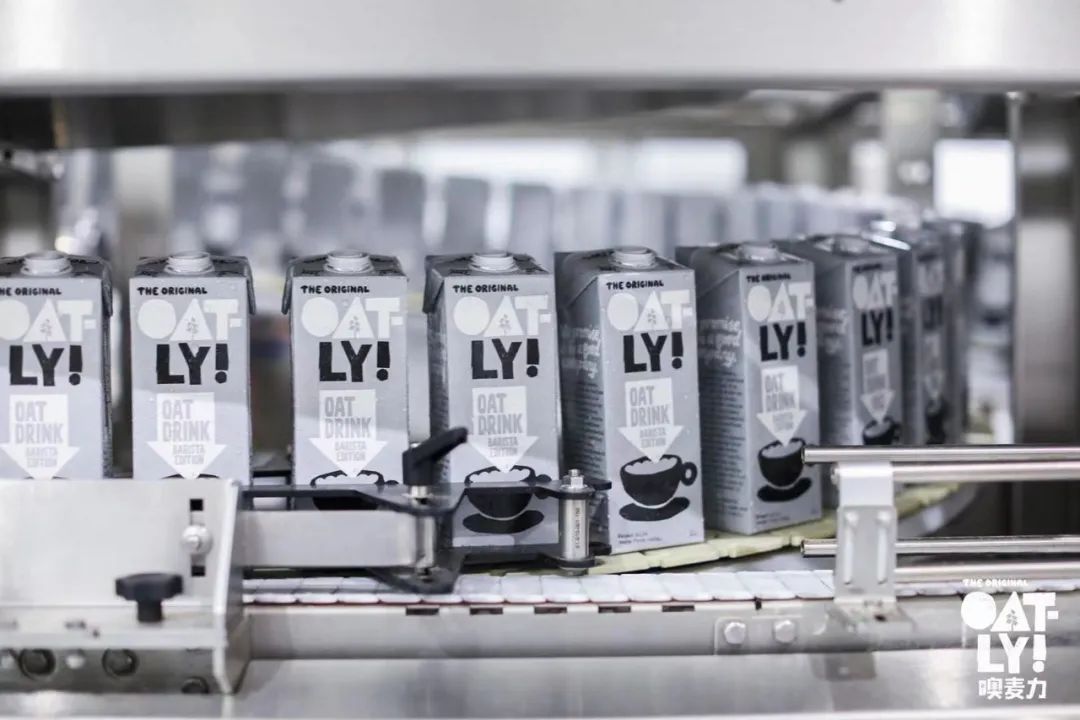 Xiaoshidai also noted that at the meeting, how to deal with inflation has also become the focus of attention. According to Christian Hanke, chief financial officer of oatly, the overall cost of goods sold in 2022 is expected to rise by 8% ~ 9% compared with 2021, and the costs of raw materials, freight and manpower will rise to varying degrees. To help partially offset rising costs, the company is strategically raising prices in the Americas and EMEA (Europe, the Middle East and Africa). In addition, Hanke also pointed out that another key factor in the recovery of profit margin is capacity expansion. On the one hand, the realization of localized production can save operating costs. Taking Asia as an example, Petersson revealed that after the completion of the Singapore plant and Ma’anshan plant, it is expected that this market can gradually stop receiving EMEA supplies in the first half of this year. On the other hand, the new production capacity also helps to optimize the combination of production modes and then improve profits. “This will reduce our dependence on combined packaging, especially in the United States.” Hanke said. Xiaoshidai noticed that among the three existing production modes of oatly, the cost of combined packaging is higher. Most of the newly-built or planned factories belong to the “end-to-end self production” mode with high profit margin. 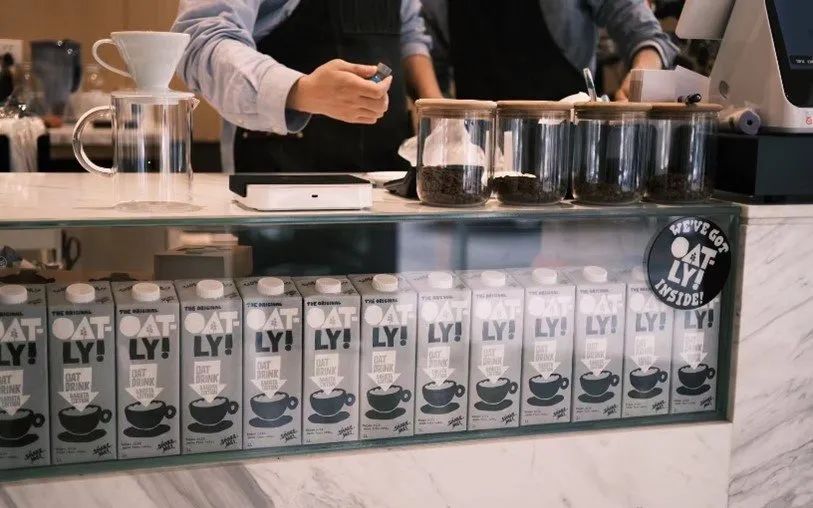 at present, oatly has six factories around the world, including China’s first factory officially opened in November last year, with an operating capacity of more than 600 million litres by the end of last year. In addition, the company plans to open three new plants next year, including a second Chinese plant. Petersson said that oatly will continue to improve the capacity utilization of existing factories. At the same time, considering that the epidemic has prolonged the delivery time of some production line equipment, the company will concentrate resources on building three new factories and postpone the small-scale expansion projects of two existing factories. “We are clearly monitoring and evaluating all projects. Given the dynamic operating and supply chain environment, I think it is wise to move forward more carefully in stages. Therefore, the figure (operating capacity by the end of 2022) has been reduced from 1075 million liters to 900 million liters.” Petersson said.

Pay attention to “xiaoshidai” (wechat: foodinc) “and reply to” oatly “to see the wonderful news.