If it were not for such a description involving the Chinese market, the 2021 annual report of multinational catering giant RBI might not attract much attention from the domestic catering industry. RBI owns many well-known catering chain brands such as Burger King, PoPeyes and Tim Hortons.

Xiaoshidai noted that restaurant Brands International (hereinafter referred to as RBI) disclosed in its financial report released in mid February that in early 2022, RBI negotiated with the Chinese main franchise parties of Burger King and PoPeyes to solve the “business disputes” in 2021. 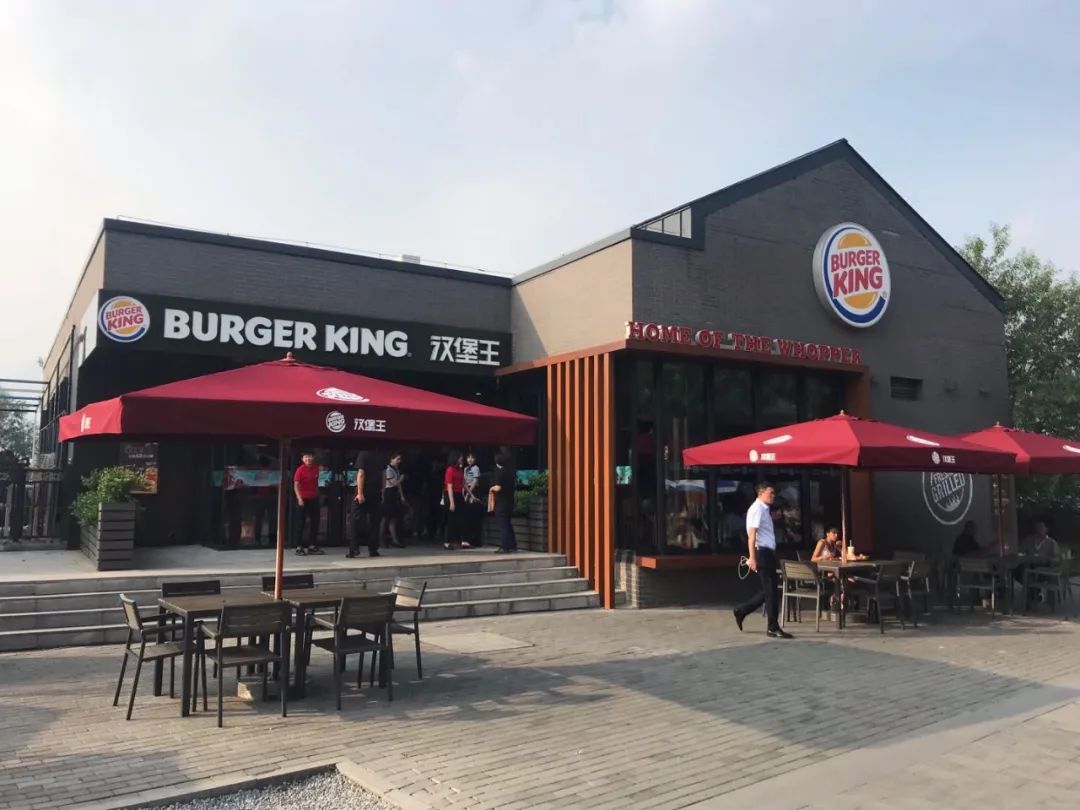 RBI did not “name” any companies in the above financial statements.

According to public information, TFI tab food investments (hereinafter referred to as TFI), a large Turkish catering group, is the main franchisee of Burger King restaurant in China. In 2020, TFI will introduce PoPeyes, a fried chicken brand, into the Chinese market.

What the hell is going on? Next, let’s have a look.

“Based on these discussions, we expect to agree to pay about $100 million in 2022.” RBI stated that $72 million had been recorded in the net litigation settlement and reserve in 2021. When the remaining part occurs, it will be presented as investment expenses recorded in the equity method.

“Most of this money is related to PoPeyes, which is expected to resolve disputes between the two sides and enable us to develop in the Chinese market together with a new master franchisee.” RBI said in the financial report.

The company also said that in addition, the above negotiation results will allow RBI and its partners to provide equity capital for burger king’s business in China.

However, RBI did not disclose the reasons for agreeing to pay the funds and disputes, but stressed that the large amount of funds paid for this purpose is conducive to the development of its brands in China. “We believe that the outcome of this negotiation will accelerate the growth of PoPeyes and Burger King brands in China in the next few years.” RBI reported. 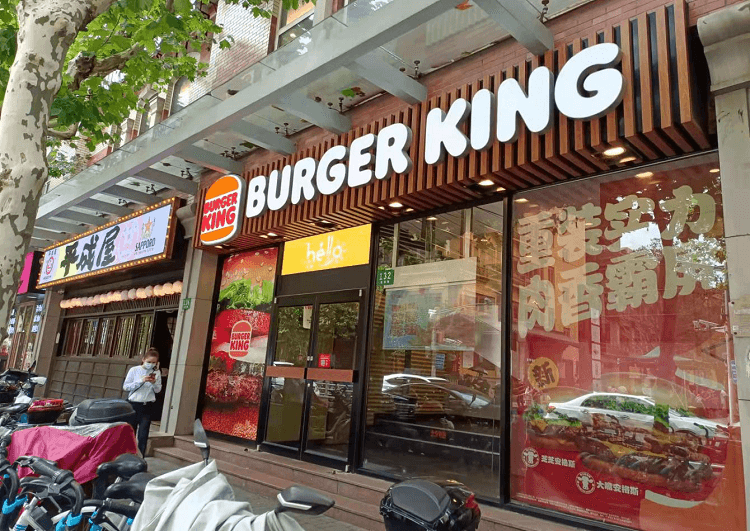 “I won’t talk too much about this at this meeting, but I have known these people for a long time and believe that there is a smooth road ahead to help accelerate growth in China, which is obviously one of our top priorities.” Jose CIL said.

In addition, xiaoshidai also noticed that when attending the UBS global consumer and retail conference in early March, David shear, President of RBI international business, also talked about the “great prospects” of Tim Hortons coffee and PoPeyes in the Chinese market several times. He did not mention “disputes” at the meeting. 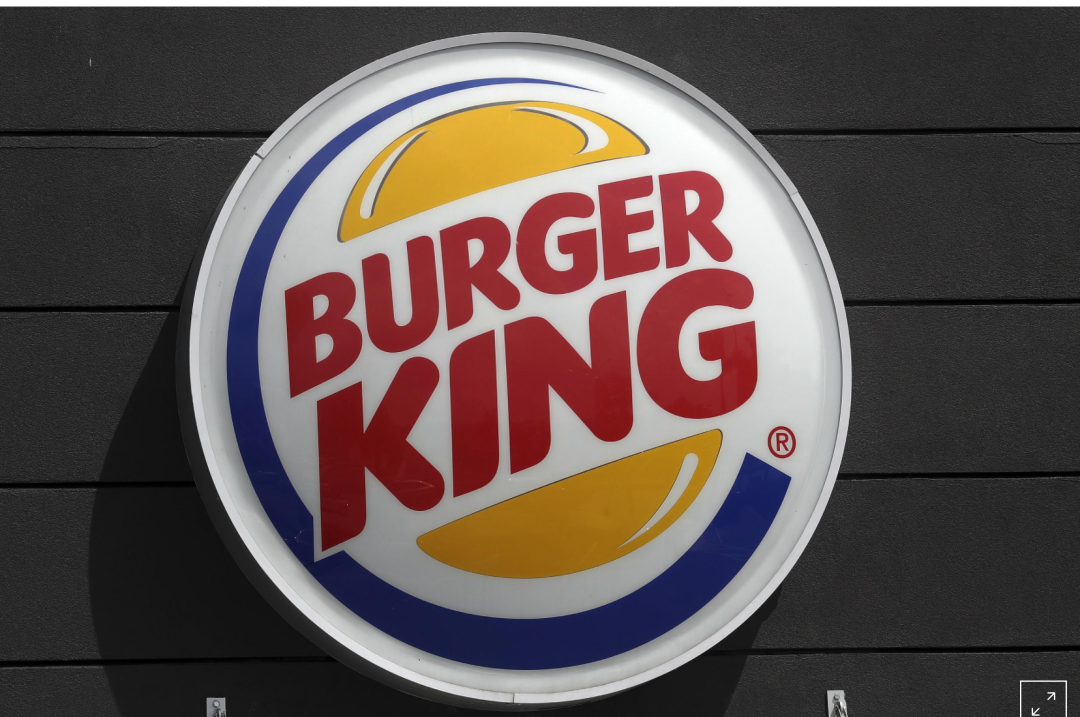 On the statement disclosed in the financial report, Burger King China did not give further explanation when accepting the snack agent’s inquiry, but its latest response said: “Burger King (China) Investment Co., Ltd. has undergone industrial and commercial changes, and the registered capital has increased from US $220 million to US $310 million. RBI is increasing investment in the Chinese market to accelerate development.”

The above capital change of Burger King (China) Investment Co., Ltd. was completed on February 14. 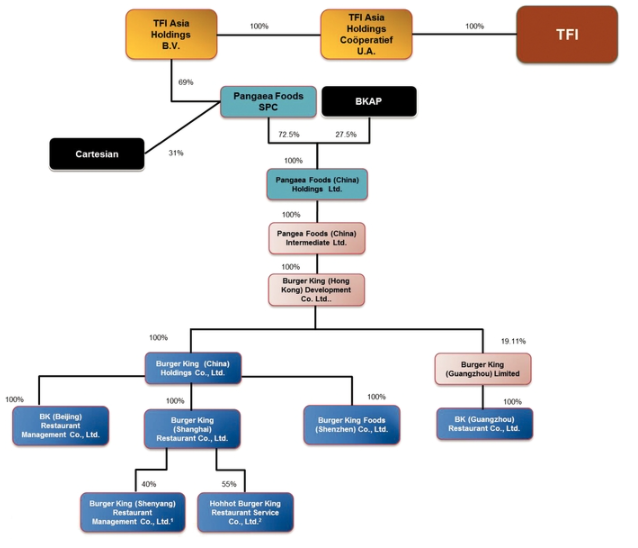 For the statement of the financial report, xiaoshidai also asked RBI’s global headquarters by email for more details, but it still didn’t get a reply after waiting for two weeks.

In this regard, Shen Meng, executive director of Xiangsong capital, said to xiaoshidai today that the core reason for commercial disputes is often the difference in the distribution of interests in the front and back periods. As for catering franchising, it may be that there is a deviation in understanding the details of the cooperation terms between the brand and the franchisee in the early stage. He speculated that from the results of the discussion, “it can not be ruled out that RBI failed to fulfill some commitments in the contract with TFI in the later stage”.

Although the “sudden” release of the brand is confusing, it is certain that as the Chinese “trader” of the two major brands of RBI, the foundation of TFI is difficult to shake for a time.

Today, xiaoshidai checked its official website and noticed that TFI is currently engaged in catering business in Turkey, China and other countries, and is the world’s largest franchisee of Burger King. At the same time, the company headquartered in Turkey also operates the fried chicken chain brand PoPeyes, the Italian flavor chain brand shengbanuo, the Turkish catering brand Abbas, the Turkish rotary barbecue and USTA P İ DEC İ wait. 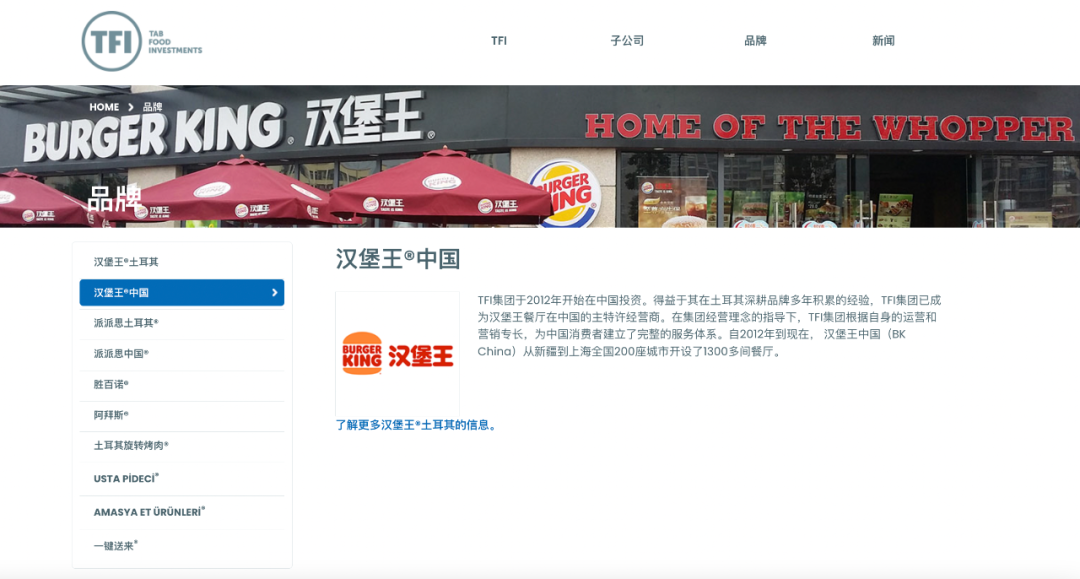 As early as 2012, TFI began to operate in China. At present, TFI is the main franchisee of Burger King in China and has opened more than 1300 burger kings in 200 cities in China. In 2019, TFI announced that the “Burger King” brand “brothers” and RBI group Popeyes were introduced into China, and opened the first Chinese mainland Popeyes store in Shanghai in 2020.

After 10 years of development, the Chinese business composed of Burger King and PoPeyes brands has become an important part of TFI’s overall business. According to the data on its official website, as of December 31, 2021, TFI has opened 2660 restaurants, more than half of which are in China, with a number of 1379.

In September 2021, KORHAN kurdo, founding partner and CEO of TFI ğ Lu said: “in 2020, our consolidated revenue reached 7.2 billion lira, of which 60% or 4.3 billion lira (about 1.853 billion yuan) came from overseas business. Our total EBITDA (profit before tax, interest, depreciation and amortization) reached 772 million lira (about 333 million yuan), of which 44% came from overseas business.”

Over the past years, TFI’s revenue in China has also expanded rapidly. Korhan Kurdo ğ Lu said that from the consolidation of China’s performance in 2013 to the end of 2020, the company’s revenue in the Chinese market increased by 5.7 times. The article also said that TFI aims to maintain its global growth through investment, especially in China and Turkey.

It can be expected that according to the original plan, Burger King and PoPeyes in the Chinese market will be an important starting point for TFI’s future growth. For this reason, Popeyes has proposed the goal of opening more than 1500 stores in Chinese mainland in the next 10 years. As for burger king, TFI has not announced the goal of opening stores in China in the past two years. However, it is not difficult to imagine that in the face of KFC, McDonald’s and other brands expanding their stores at this high speed, the brand still needs to make further efforts.

According to Euromonitor International’s total retail sales of food services, Burger King ranked fifth with a share of 1.2% in 2021, while KFC and McDonald’s ranked second with a share of 12.0% and 6.7% respectively Like some peers seeking listing to support expansion, TFI has also tried to break through the capital market. Xiaoshidai introduced that after delaying its listing plan in the United States due to the sharp decline of US stocks in 2018, Bloomberg quoted a person familiar with the situation in 2019 as saying that the company was considering IPO of its business in the Chinese market in Hong Kong.

Xiaoshidai will continue to pay attention to the latest progress of the event.