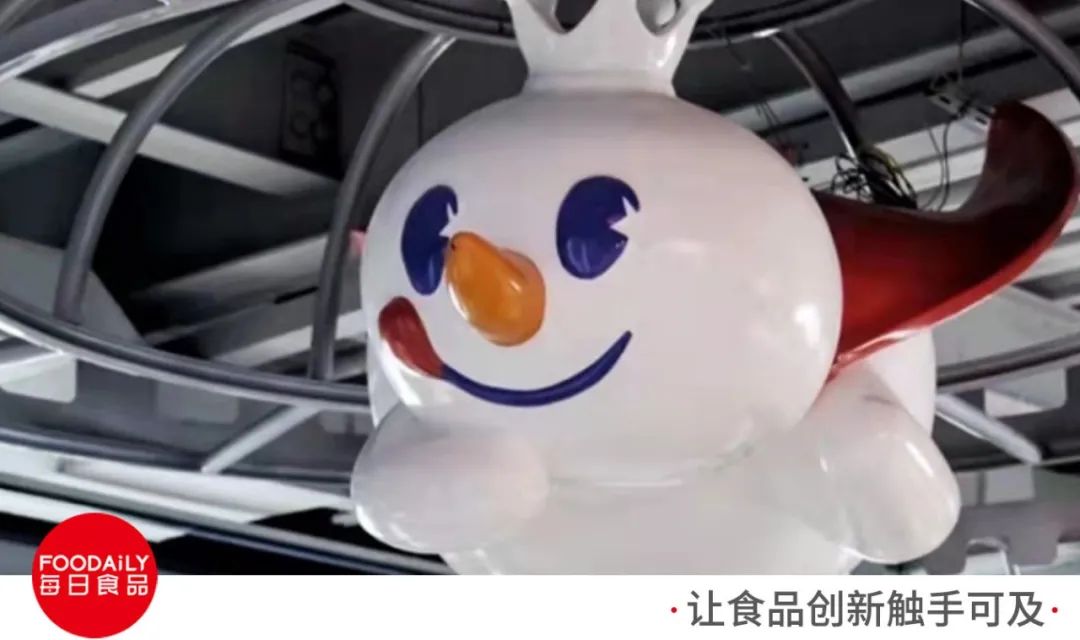 “
what business has honey snow ice city done silently.
”
Michelle ice city has expanded its new business again. This time it may be a robot.
On March 14, snow ice city registered and established a new company: Snow King interstellar Technology Co., Ltd., whose business scope includes the research and development of intelligent robots. Looking back on the “expansion road” of Michelle ice city, from selling coffee and ice cream to agricultural companies and technology companies… It is no longer a “milk tea shop”, but a huge “consumption universe”, opening the shop all over the world and making its influence all over the network. Today, let’s dig the “Honey snow universe” to see what business they have done silently——

Sinking, expanding and making VC
Snow King has a “Sea King” heart
Did you find out? After WanDian, the “ambition” of honey snow ice city is getting bigger and bigger. 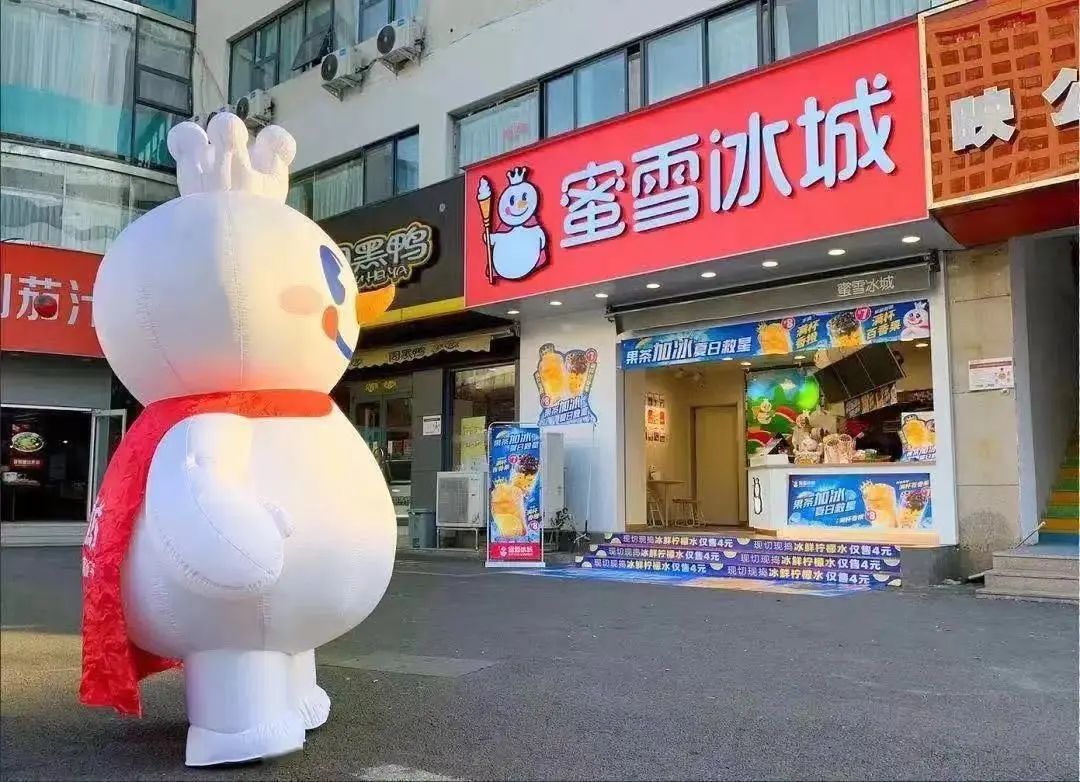 enterprise investigation shows that from the second half of last year to now, honeysnow ice city has invested in a number of enterprises, most of which are 100% controlled. Its businesses include agriculture, catering services, investment and financing, international trade, supply chain, food sales and other fields. Now there is another intelligent robot R & D. Almost every month, you can see the “new business” of honey snow ice city. For example, in September last year, honey snow ice city opened an “agricultural company”. As soon as the news of the development of “farming” was released, it quickly climbed to the first place of microblog hot search, and gained nearly 10000 comments and 300000 likes.

not only expanded the business scope of the company, but also started a VC business. In October, xuewang investment company established by miyue ice city also completed its first investment and became the shareholder of huicha, a pearl milk tea brand originated in Guangdong.

and
in terms of opening stores, snow king never stopped, sinking and going to sea.
at the end of February, Michelle ice city also opened a new store in Singapore and Xinshan City, Malaysia, respectively, following the “affordable” route. Local Chinese said that “prices return to ten years ago”. Since last year, all relatives living in the 18th line County finally know what I do: “tea, I know, I just drank honey snow ice city two days ago.” In the eyes of many consumers in the sinking market, the first cup of ready-made tea comes from honey snow ice city. Analyzing the reasons, the price advantage needless to say, the brainwashing Divine Comedy of magic out of the circle is also an important factor. Since last June, “you love me, I love you, honey snow ice city sweet honey” has pried hundreds of millions of traffic, and Snow King has become a new top stream.

in other words, sinking, expanding and capturing a broader market are the general direction of honey snow ice city in recent two years. In fact, Michelle ice city has done more than that. I found that the “pattern development” of tea business is the core of Michelle ice city’s business expansion – 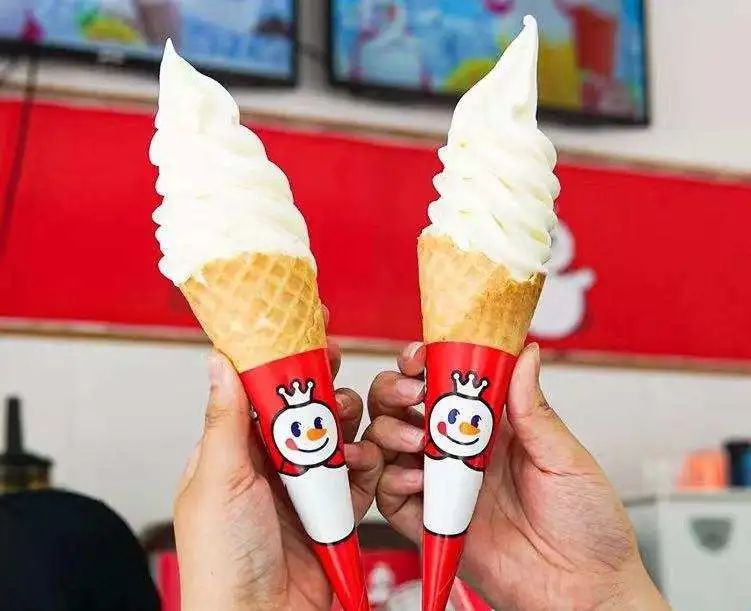 snow ice city has made parity part of the brand gene. I found out that the flagship store of Bingxue city was opened on Bingxue road in Zhengzhou, but it was almost 50 away from the flagship store of Bingxue city in September last year. — the lowest price is 4 yuan and 9 strings, and the taste is not inferior to that of Fried String shop. It is difficult for business to be unpopular. The 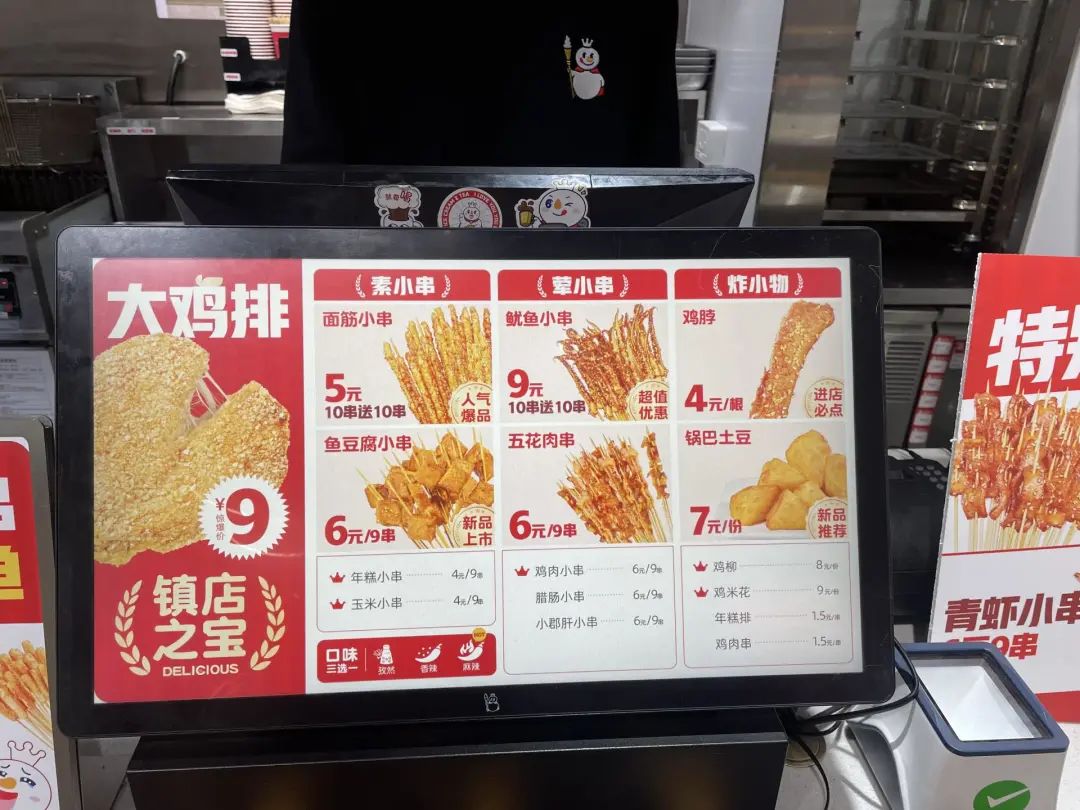 Fried String business may not be the main battlefield of honey Snow Ice City, but new items and new categories will attract new consumers to punch in. Today, the surrounding products of honey snow ice city have formed a rich product line: one is tea, coffee and some small snacks, which are sold online and offline at the same time. Many people try the new peach and coffee melon seeds while buying milk tea. The other is to bind the colorful surroundings of Snow King IP, such as sail cloth bag, mug, pillow, doll, key chain and blanket. The new doll also triggered the unpacking Carnival of station B. 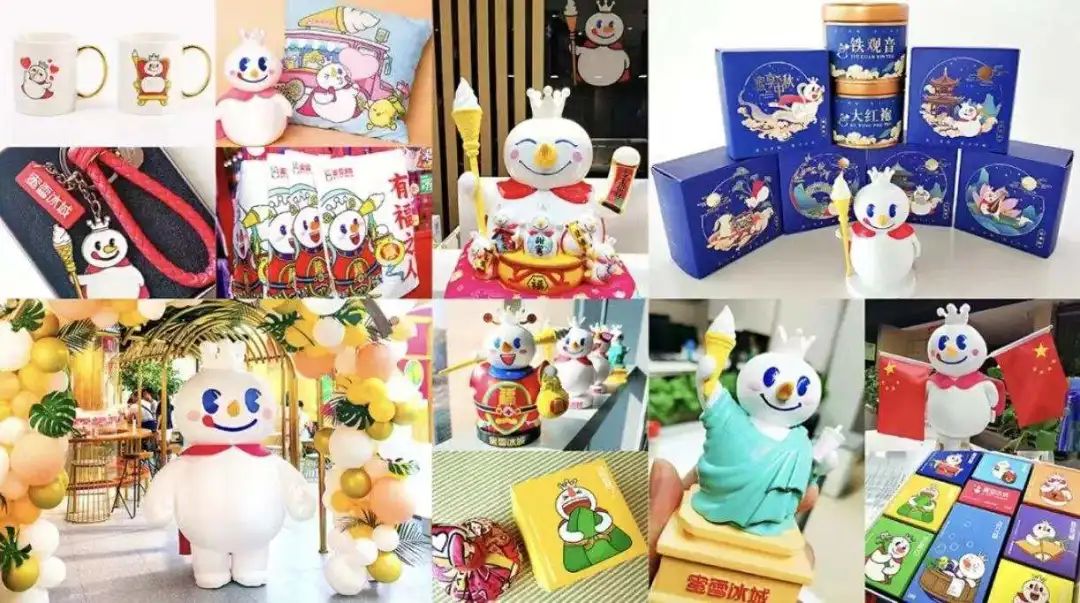 the biggest success around
lies in the popularity of xuewang IP. The ultimate cost performance + successful IP creation enables tea shops to “sell a universe”. 2. The stores have a “sense of hot selling atmosphere”. The stores across the country are highly unified. When passing by the stores of honey Snow Ice City, a strong feeling is that this store is very lively at first sight. The bright visual color of 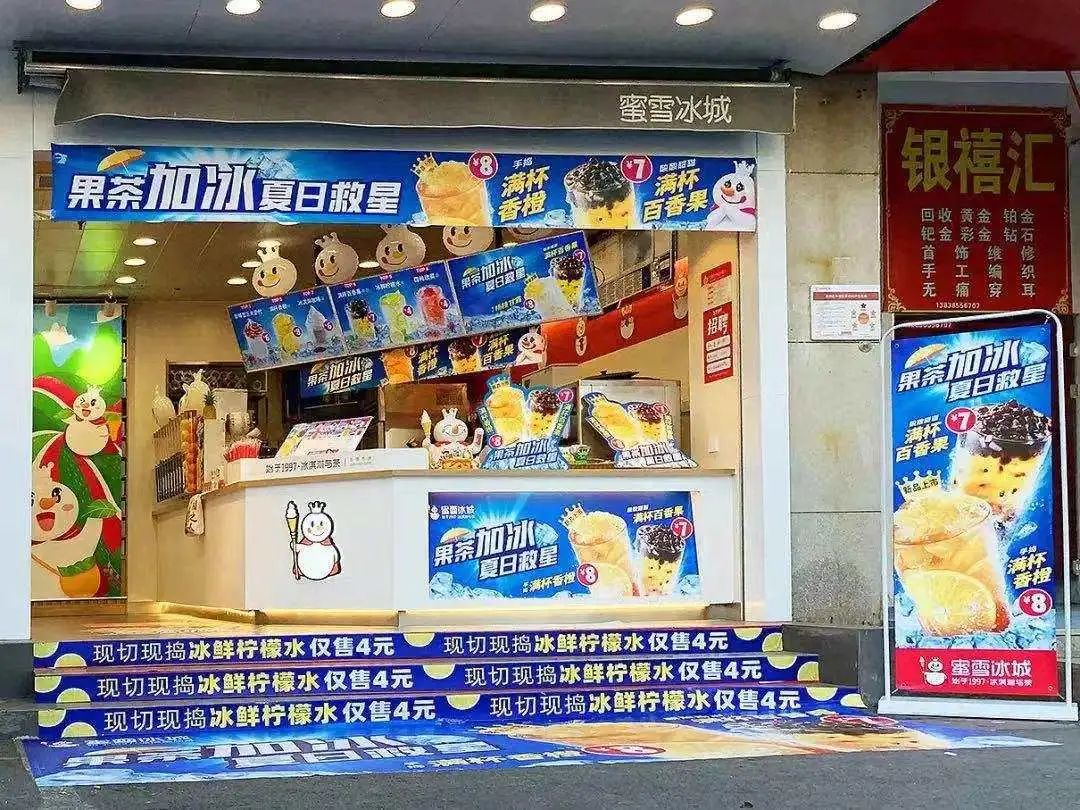 door covers every inch of product information from banners, TV screens, front desk posters and posters extending from steps to the ground. Beyond vision, sound is one aspect. The slogan “spring is the season to eat ice cream” can be heard everywhere in the store of honey snow ice city recently. With the broadcast of the theme song “Honey snow ice city sweet honey”, it conveys the feeling of booming business. More importantly, the lively honey snow ice city maintains a high degree of unity of “atmosphere”. The honey snow ice city I saw in the northeast is the same as the honey snow ice city I saw in Henan. Even if the number of people queuing at the door is different, the hot selling atmosphere is the same. 3. Magic propaganda continues to attract attention. Recently, honey Snow Ice City brushed a wave of attention again through the slogan sentence “spring is the season to eat ice cream”. In the shaking, tiktok is the theme of slogan. In a few days, the maximum volume has reached 16 thousand +, and there are various kinds of video calling, which is simply a magic propaganda. Worthy of the name, Wang Yecheng had also launched a “ice cream rap contest” and “snow tiktok competition”.

it can be said that starting from the theme song of honey Snow Ice City, every once in a while, honey snow ice city will use a new challenge to stimulate consumers’ attention and enthusiasm for the brand on the social platform. 4. The overseas market is expanding rapidly, with stores all over Southeast Asia. As mentioned above, snow ice city recently opened a new store in Singapore and Singapore, Malaysia. In fact, since opening its first store in Vietnam in 2018, the overseas stores of Michelle ice city have spread all over Indonesia, the Philippines, Singapore and other major Southeast Asian countries; Especially in Vietnam, Michelle has more than 200 stores. 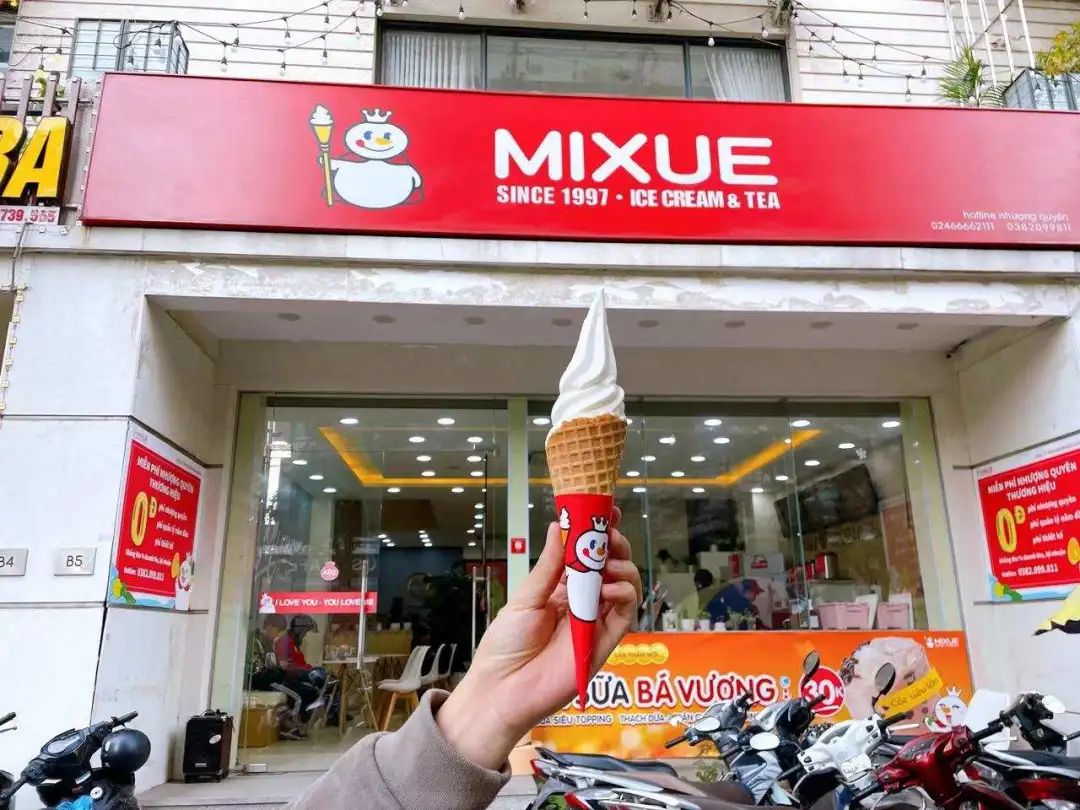 tropical eating habits and consumption attributes give milk tea a fairly good consumption base in Southeast Asia. 5. Subdivide the track and cover it with sub brands. If deep ploughing tea is a vertical expansion, making coffee and ice cream is a horizontal growth and occupying more track opportunities. Michelle ice city has several sub brands, among which lucky coffee and polar Latu are the most concerned. Lucky coffee follows the expansion strategy of miyue ice city and sets the price of coffee at 5 ~ 15 yuan, focusing on University City, pedestrian street, shopping mall, etc. in sunken cities. With the rise of coffee track, the number of lucky coffee stores in China has exceeded 500 in January 2022.

polar chart is made ice cream. At present, it has opened 20 stores. According to the theory of “not putting eggs in the same basket” in the investment, the layout of honey snow ice city in milk tea, coffee, ice cream and other aspects can be used to disperse market risks and expand brand effect. Of course, this method is destined to be only suitable for tea brands with sufficient funds and no shortage of money to seek new business models and business growth points. 6. Improve the efficiency inward, and use the method of “no increase in raw materials”. If the above points are mainly that honey snow ice city obtains more business by expanding its business scope, the next action can be seen as honey snow ice city “improving the efficiency” inward and gaining brand competitiveness.
pay attention to the menu of honey Snow Ice City, and you will find that its menu attaches great importance to the multiple matching of raw materials to create new products. 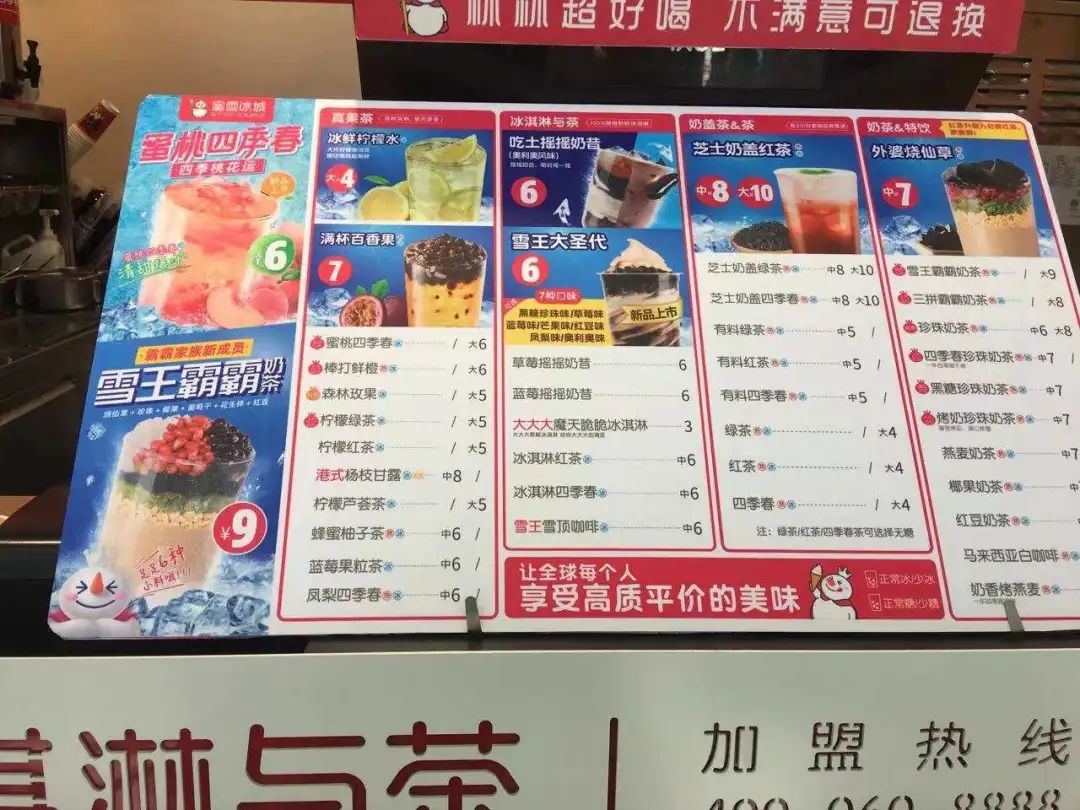 “Honey snow universe” heat
from the accumulation of the store before, from the new consumption field, honey snow ice city completely out of the circle in June of 2020 – when the ice snow city just broke through the shop, let many people notice this from the sinking market “local flavor brand”. However, if you have an in-depth understanding of honey Snow Ice City, you will find that in addition to accelerating the pace of establishing a new company in the past two years, the rest of the attention comes from the accumulation before WanDian. Let’s smooth out the expansion idea of “Honey snow consumption universe”: offline expansion: sinking, going to sea and opening up new markets; Online expansion: create a popular IP Snow King and constantly create new topics; Horizontal expansion: selling fried buns, selling coffee, making new tracks and sub brands; Inward “expansion”: optimize product mix, improve raw materials and store opening efficiency. This year is regarded by many peers as the “most difficult year”. Compared with the rapid development in the previous two years, this year is indeed slowing down. Everyone feels that the tea business has become “difficult”. But the more so, the more right and long-term planning should be made. At this time, the layout idea of “Honey snow universe” is more meaningful for reference.
Author: Jin Yu; Source: kamemclub (ID: kamemclub), reprint has been authorized. Reprint authorization and media business cooperation: Amy (wechat: 13701559246); In addition to the innovative value of the 2022-02 e-commerce fair and the 2022-02 e-commerce fair, the e-commerce fair in Shanghai aims to provide more resources for the whole industry, such as the 20202-02 e-commerce fair and the 20202-02 e-commerce fair. Here, products, content, technology, marketing and other aspects related to food & brand innovation will be presented in the form of “professional exhibition + innovative content + interactive experience”, breaking through and differentiating in the consistent form of industry exhibition.